The team behind The Handmaid’s Tale had teased a “nomadic” course ahead for season four. On Tuesday, the official trailer for the return of Hulu’s flagship drama teased what that will look like.

The two minute-plus look labels Elisabeth Moss’ June Osborne as “public enemy No. 1” in Gilead, the setting that has dominated the Bruce Miller drama up until now. The third season had expanded the world created in Margaret Atwood’s classic novel, of which the series is based, and season four continues to do just that. Leaving the greater area of Boston for the first time after an uprising, June and her fellow Handmaids go on the run beyond the walls of the totalitarian state that has served as the main backdrop of the dystopian series.

The official synopsis from Hulu calls June a “fierce rebel leader,” but warns that the risks she takes bring unexpected and dangerous new challenges as her quest for justice and revenge threatens to consume her and destroy her most cherished relationships.

Handmaid’s Tale returns with the first three episodes of its 10-episode season April 28. 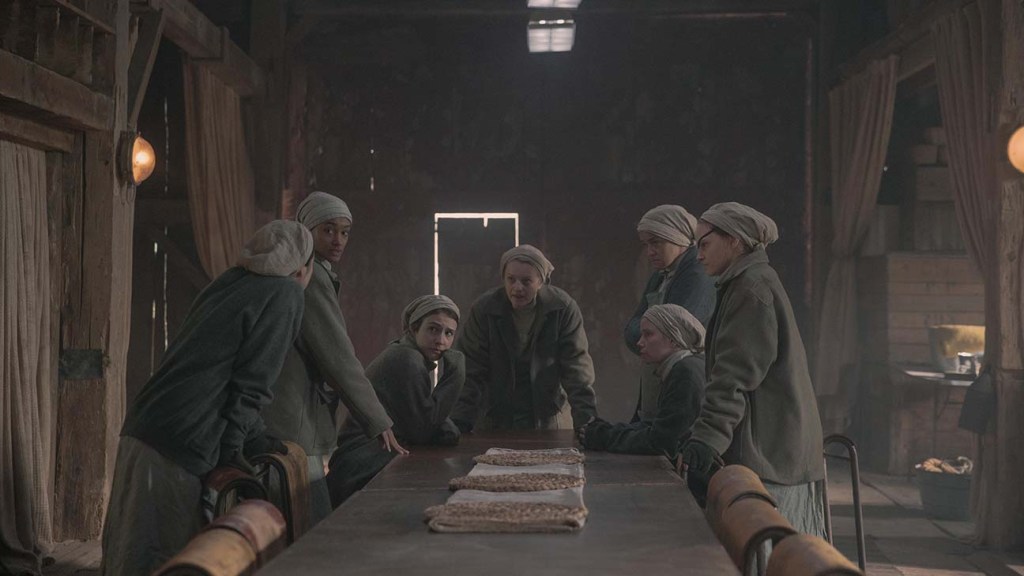 When speaking about the MGM Television-produced drama, Miller and Moss said the themes tackled in season four will continue to relate to what the country is experiencing in the post-Trump era. “A lot of this season is about waiting for and expecting things to snap back to normal and [asking], ‘Why aren’t they snapping back to normal?'” said the series creator and showrunner during a TCA panel in February. “That feeling of, ‘When is the world going to settle down after things have changed?’ is something we cover in small and large ways.”

When viewers last saw June in 2019, the resistance leader was fighting for her life after liberating dozens of Gilead children. In order to get their rescue plane to safety in Canada, June created a diversion and took a bullet to the shoulder. The final scene of the season three finale showed the plane landing safely, while a wounded June was being saved by her fellow Handmaids.

Miller said recently that while he never considered killing June, the ramifications of her actions set the series on a new trajectory. “This season, we’re delivering. We’re delivering on a lot of things we set up and I think it’s very satisfying,” he promised of the payoff ahead for viewers.

Watch the trailer for the return of Handmaid’s Tale, which has already been renewed for a fifth season, below.