“Husbands and wives only, I’m afraid.”

With six words, Serena Joy (Yvonne Strahovski) establishes the new status quo within the Waterford household. She and Fred (Joseph Fiennes) are not the only married couple within the residence anymore; guardian Nick Blaine (Max Minghella) has now joined the club, following one of the most upsetting scenes in Handmaid’s Tale history — both to watch as a viewer and to participate in as a member of the cast and crew, according to what creator Bruce Miller and several stars tell The Hollywood Reporter.

In season two’s fifth episode, “Seeds,” which sees Elisabeth Moss’ June almost entirely buried beneath her handmaid alias Offred, Nick and other guardians are at the center of an elaborate mass wedding ceremony. Their brides, all of whom they are meeting for the first time, are children; no more than 15 years of age. According to Miller, the scene comes straight out of Margaret Atwood’s original novel, not to mention true stories about similarly disturbing arranged marriages conducted across the world.

'The Handmaid's Tale' Season 2: How Silence Gives Way to the "Heroes of Today"

“In the book, there’s a scene where a bunch of children are married to young guardians who they have never met before,” Miller tells THR. “It was such an intriguing part of the book. This is something that’s been discussed as happening in America and happening all over the world. It’s such a pervasive horror for these girls who are married off well before they have any agency and any way to consent. They’re walked off into this life, and it doesn’t matter who they end up with, even if it’s someone you would say is a good guy; it’s just a horrible dynamic.”

It’s also what Fred Waterford wants for Nick, as Joseph Fiennes explains exactly why his menacing character helped to arrange this marriage for his in-house guardian.

“From Fred’s perspective, he’s trying to keep his enemies as close to him as possible, vis a vis Nick,” says Fiennes. “He suspects Nick is the dad [of Offred’s unborn child]. Rather than expel him, he’s giving him a contract, whereby he’s assured the possibility of rising through the ranks of Gilead, which he imagines is what Nick wants, and he’s also keeping Nick close, which is a much stronger position than alienating him.” 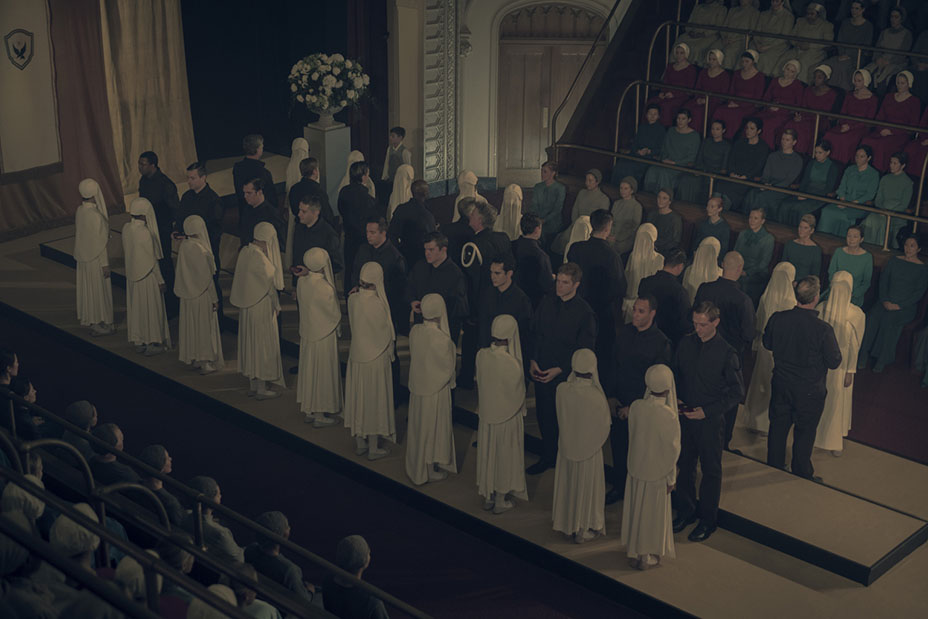 Fiennes describes Nick’s marriage as a moment of victory for Commander Waterford — but in terms of shooting the scene, as a human being? Quite the opposite.

“It was triumphant for Fred, but for me, personally, seeing these young actors come out — and some of these young women looked about 12 or 14 — and seeing them standing opposite their future husbands in this arranged marriage… men twice their age, some of them 40 or 50 years old… it was genuinely abhorrent to see,” says the actor. “It was very, very real. It’s another form of ritual and ceremony which is almost seemingly beautiful and orchestrated in this vaguely theatrical way, which belies the horror of it. When we did the first rehearsal, all of us were very affected by how unnerving and unsettling it was.”

As the actor at the heart of the marriage, Max Minghella, agrees with Fiennes‘ sentiment. He remembers his first reaction on learning of the twist for Nick: “I thought it was hilariously fucked up. Really, it was pretty shocking. I was so surprised by it. It’s not something I expected.” With that said, Minghella says he fully trusted the writers and filmmakers to portray the scene in a way that wouldn’t feel “exploitative.”

“I didn’t have concerns. I trust the people I work with immensely,” says Minghella. “I know what kinds of people they are. They’re people of tremendous integrity. Any of the subject matter we’re dealing with is so sensitive, that it could easily tip into something exploitative or even silly. That never happens. I never have to worry about it. With a different team of filmmakers, I might have been more anxious. Given who I work with, and how collaborative everyone is, I never feel like I’m being shoehorned into something uncomfortable.”

How 'The Handmaid's Tale' Season 2 is Exploring Survivor's Guilt

“We don’t try to make it any more terrible than it is,” Miller says of the shocking nature of the scene, and just how far he felt the show could push its depiction. “I just try to look at it in an unblinking way: practically, moment-by-moment, what would it be like for her? She’s a true believer. She wants this to work out. How does that effect Nick? I’m not trying to make it more terrible. I’m trying to illuminate it. At a certain point, you wonder, ‘Maybe there is some sort of marriage they’ll be able to have, if they’re going to be in this position.’ But in the end, she’s a child. She’s not marriage material. They don’t know each other and they don’t love each other. For us, it was a case where you read about these things and you hear about these things, and we wanted to see what it would actually be like with two people who are relatable to us.”

What’s next for Nick and Eden in the aftermath of their unsettling union? In terms of the dynamics within the Waterford house, expect the already tense situation to only get worse, according to Amanda Brugel, who plays Rita: “When status is so important that it’s almost life and death, and as Eden opens up and we start to meet her, we’ll see Rita has a lot of disdain for Eden. She’s yet another person who can tell her what to do, and another person who she now has to navigate.”

According to Minghella, Nick’s attempts to navigate his unwanted marriage won’t go so smoothly: “It exposes some shades of him which are less heroic than what we have seen before. Up until this point, Nick as a person has maintained a level of dignity and integrity that I might not be able to under these circumstances. He’s ultimately a good person who really tries to do the right thing. He fucks up sometimes, but ultimately, he’s always trying to do his best and do right by everybody. He doesn’t handle everything going forward in the best possible way. He’s still striving to do the right thing, but at some point, everyone reaches their limit. You see him stretched, for sure.”

What was your reaction to the latest Handmaid’s Tale twist? Sound off in the comments below and keep checking THR.com/HandmaidsTale for more coverage of the series.