[This story contains spoilers for the seaso– two premiere of Hulu’s The Handmaid’s Tale, called “June.”]

Elisabeth Moss was on the other side of the country when she first learned what was next for Offred: a cold and deadly walk through Fenway Park, far from the light she was hoping to find.

“I was staying in L.A. at Sunset Tower, and I had a call with [Handmaid’s Tale creator and showrunner Bruce Miller], who was going to pitch me on episode one,” she recalls, speaking with The Hollywood Reporter. “I paced around the room and didn’t speak once during the opening scene he pitched me. At the end of it, I just said, ‘Holy fuck.’ Which is basically what Offred says: ‘What the actual fuck!’ I just felt it was perfect. It felt exactly right.”

How 'The Handmaid's Tale' Remains Politically Relevant in Season 2

The second-season premiere of The Handmaid’s Tale, currently streaming on Hulu, provides an answer that readers of Margaret Atwood’s classic 1985 novel have been waiting on for 33 years: what happens to Offred after she steps into the back of a van, driving toward “darkness, or else the light?” Moss learned the answer during that fateful phone call in California, and now viewers have learned the grim answer as well.

The premiere, appropriately called “June,” begins almost immediately after the final scene of season one, which was a nearly note-for-note adaptation of how Atwood concluded Offred’s story in the book. According to Miller, there was no other option for how to start the new season, which will still draw inspiration and plot points from Atwood’s novel, albeit fueled by an all-new story.

“That’s one of the reasons we started right there,” says the Handmaid’s showrunner. “When you read the book, you’re wondering: what happens next? I’ve certainly been thinking about it for the past 30 or so years. In some ways, it’s the best and most frustrating part of the novel: that it ends, and you don’t know what’s going to happen next.”

Now we know: Offred steps out of the van and into confusing concrete surroundings, alongside several other handmaids who are similarly confused. The women are subsequently muzzled, their hands bound in leather, and are forced to march through a concrete tunnel and out into the open air — where they finally learn their whereabouts: Fenway Park, home of the Boston Red Sox.

What was once the site of America’s favorite pastime has now become an execution ground, as the handmaids are placed on an elevated platform, their heads shoved through nooses. Kate Bush’s “This Woman’s Work” begins playing in the background, providing an emotional undercurrent as the women struggle to reconcile their impending fate. One loses control over her bladder, while others grasp each other’s hands, determined not to die alone. 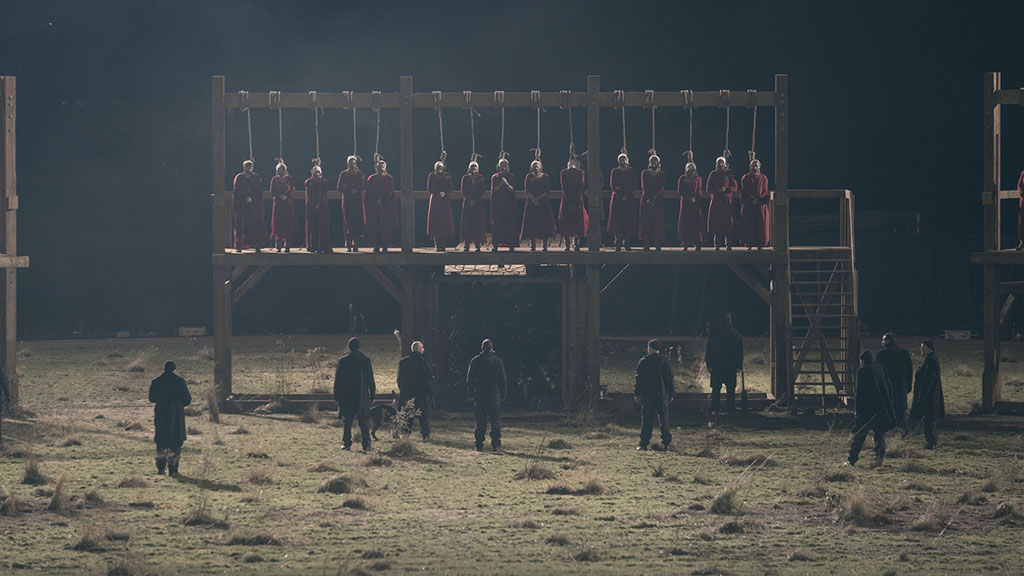 As the music hits its climax, the order to hang the handmaids is given with three solemn and familiar words: “Under his eye!” But when the lever is pulled, the handmaids drop a very short distance, very much by design. It’s revealed that this is not an execution; it’s psychological torture, as Aunt Lydia (Ann Dowd) steps out from the shadows and reveals the ruse to be a punishment for the handmaids refusing to stone their friend Janine (Madeline Brewer) to death in the season finale of Hulu’s Emmy-winning drama.

“We wondered about what kind of punishment they would get for not stoning Janine. They’re always worried about getting punished. When they do something that’s really ‘wrong,’ we feel like there needs to be strong consequences,” says Miller. “We had been doing lots of research into the ways that oppressors treat their victims, and one of the things they do is these false executions, a form of psychological torture. We thought that would be an interesting story, especially when you have this moment where suddenly, they haven’t been hung. In the back of your head, you’re thinking, ‘I wonder if that would have been better.'”

“The end of last season put Lydia in a very uncomfortable place,” adds Dowd, explaining Lydia’s mind-set in the deeply disturbing moment. “‘How did I misgauge this so badly? I thought I had control over this situation…but no.’ There was a tremendous amount of soul-searching and prayer, and I think she realized: ‘I have work to do here. I clearly have not made a strong enough impression.'”

Consider the impression made, thanks in large part to the scene’s iconic setting. Miller credits the decision to set the scene in Fenway Park to fellow Handmaid’s writer Kira Snyder: “We were talking about the scene and where we could set it, and she mentioned, ‘We could set it in Fenway Park,’ in a voice that suggested, ‘That’s impossible.’ But then we did it!”

“Tom asked me: ‘How is this good for the Red Sox and MLB?'” Littlefield remembers of the conversation. “And I said, ‘I think the recognition will be that in the right wing fascist regime of Gilead, the sacred game of baseball is no more, and we will weep for that change.'” Clearly, the pitch worked. Says Littlefield, “We got the full support of Fenway and Major League Baseball to do that opening scene, which shocked a lot of people. I think it’s sensational. They were outstanding partners.”

'The Handmaid's Tale': Where Everyone Left Off and What's Next in Season 2

The authentic setting of Fenway Park certainly sells the sense of terror running throughout the scene, and by all accounts, the physical shoot itself only added to the feeling of helplessness and despair.

“Those were two of the hardest nights of shooting I’ve ever done in my whole career,” remembers Moss, who also happens to be a big baseball and Chicago Cubs fan. “The Fenway scene was shot over two night shoots, and the first night was incredibly cold. I was cold, but I have to hand it to my fellow handmaids, who don’t quite have the same care that I get, and were fucking freezing. They were so brave and so cool and gave such incredible performances. I was so proud of them that night. They were amazing.”

“It all helped with building the dire circumstances of the scene,” says Dowd, recalling the cold atmosphere of the shoot. “The handmaids never complained, the background actors who never say boo and are out there in the cold, bitter rain. The whole thing — the ambiance — every little bit of it…it was all playing in our favor.”

As for why this was the right way to follow the conclusion of Atwood’s story — shirking both the dark and the light in favor of something different?

“The Handmaid’s Tale is much more complicated than black and white, or dark and light,” says Moss. “The fact that [Offred] doesn’t get out, but she doesn’t stay [at the Waterfords], and something different completely happens…it feels exactly right, taking the option you don’t expect.”

How did you react to the season-two premiere’s opening scene? Sound off in the comments and keep checking THR.com/HandmaidsTale for more coverage.