Throughout season three, The Handmaid’s Tale has pushed June (Elisabeth Moss) deeper into the heart of the resistance against Gilead — and in the season’s eighth episode, June pushes right back against the dystopian nation, with devastating impact.

In “Unfit,” June rails against Ofmatthew (Ashleigh LaThrop), a fellow handmaid who follows Gilead’s ways to the letter — so much so that she’s responsible for the death of the Martha assigned to care for June’s daughter, Hannah (Jordana Blake). June retaliates by leading her fellow handmaids in open rebellion against the pregnant Ofmatthew, eventually pushing her so far that she steals a firearm from a Gilead soldier, shoots up a supermarket and gets shot in kind. A tense look between the women during the shootout makes one fact painfully clear: June not only approves of Ofmatthew’s violent outburst, but practically willed it into existence.

Blessed Be the Truth: Inside 'The Handmaid's Tale' and the United Nations' Creative Alliance

“June’s journey through much of the season has been about her learning how much she needs to become like her oppressors in order to beat them — and that’s not a good thing,” Handmaid’s writer-producer Kira Snyder, who wrote “Unfit,” tells The Hollywood Reporter about the episode’s deadly ending. “As we’re heading into the end of the season, she does some very dark things, and we’re not supposed to like those things she’s doing. In the writers room, we often talk about how one of June’s superpowers is her incredible capacity for empathy. Often, it’s used for good. But in this episode, and in other episodes, she can weaponize it. She can hurt people. She takes a dark turn here.”

“It’s a bit of a story of someone being radicalized and becoming an extremist. She’s weaponizing Ofmatthew, someone who is trying to survive in this world, in a way that is not sympathetic. It’s a horrible thing she does. Even the shunning of Ofmatthew is awful. June is using the only weapon that Gilead affords the handmaids — social ostracization — and she’s using it very, very well. She’s learning to use Gilead’s tools against them, and it’s not great. It shouldn’t be admirable. In time, by the end of the season, she will discover where the edges of her humanity are. That’s a big part of the journey through these final episodes.”

Outside of June’s descent into darkness, “Unfit” largely focuses on another character entirely: Aunt Lydia, played by Ann Dowd. A significant portion of the episode takes place before the fall of America and the rise of Gilead, depicting Lydia as a school teacher who has a shot at love with a colleague as well as with a struggling family, only to squander both of those opportunities in a way that sets up her own dark future. Ahead, Snyder speaks with THR and elaborates on the new contextualization of one of the most iconic Handmaid’s antagonists. 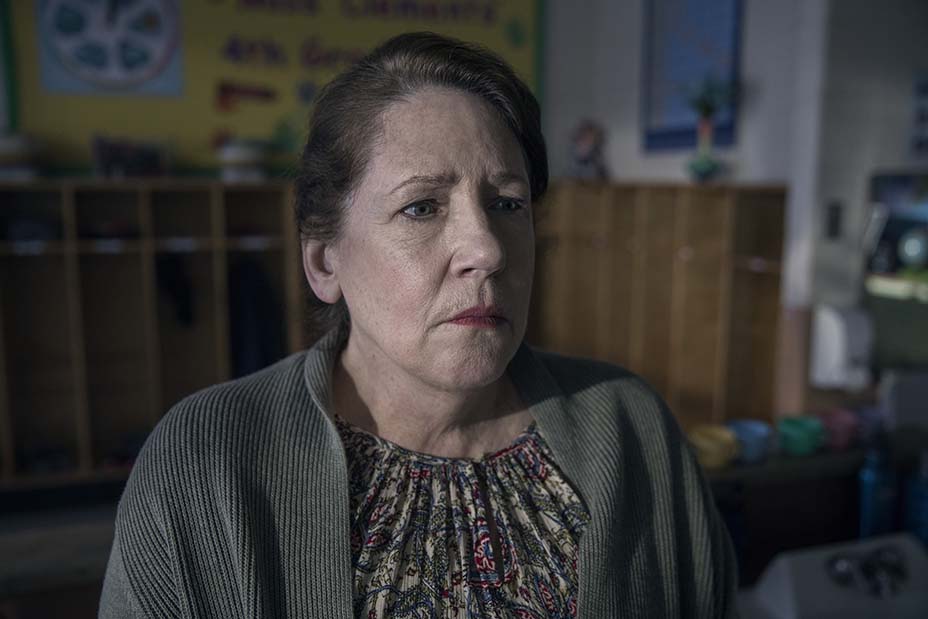 How did you arrive at the decision to peel back the layers on Lydia’s past and tell us about this particular moment in her history?

We spend a lot of time at the beginning of every season and throughout the season talking about our characters and where we want to take them. Something that naturally falls out of that is us moving into their histories. We have all of their histories mapped out. It’s amazing to peel back the layers, one at a time. We have seen a bunch of moments in June’s life, as well as in Serena Joy’s (Yvonne Strahovski) and Fred’s (Joseph Fiennes) lives, and even with Emily (Alexis Bledel). Lydia has her own set of moments, and it was fantastic to tell the story of one moment in her life. We don’t believe anything is as simple as a person has a single moment that changes them and it becomes their origin story. We’re all composed of lots of those moments. What we do on the show, when we’re trying to figure out which piece of the backstory is worth telling, is looking at what fits in the other present-day stories.

With this one, it became clear that this was a June versus Lydia episode, with Ofmatthew torn between them and ending up weaponized by both of them. In the June versus Lydia story, Lydia really thinks she’s helping these girls. Where does that come from? Is it something she’s always done? We wanted to get into Lydia’s life and see her as that caretaker, that nurturer, the person who wants to care for people and clean up messes when she sees them. She likes messy people, and she likes fixing messy people. This was a story we wanted to tell about that.

The first time we saw Lydia this season, we saw that her assault at the hands of Emily really left an impact. We saw a loss of control within her in that episode, and again later on when she attacks Janine at the Putnam house. A loss of self-control is something she’s wrestling with now for the first time in a long time, and Lydia is all about control. That’s something we wanted to explore with her. Was there a moment in her own past where she lost control? How did she feel about that? Those were some of the factors we had in mind that we wanted to bring into the episode.

What kinds of conversations did you have with Ann Dowd about digging into this version of Lydia?

We have a very lively collaboration with our castmembers all along, and I know Bruce Miller and Ann had conversations at the beginning of the season about Lydia’s arc for the season. We had extensive conversations with her as this episode was coming together, both in terms of laying out what Lydia is going through in this episode and how it fits into other parts of the story. We know a few other things about Lydia’s life from other stories in earlier episodes, which we’re not really dealing with here. There are some embedded mysteries, where we hear about her sister’s child, who passed away. That’s not a story we touch on in this particular episode, but you feel it hovering in the distance. It happened in the past. It answers some of the questions about her. She’s not with her own family at Christmas. She’s with this other family. There’s a lot more to Lydia’s past than we have shown so far. Those were central to the conversations we had with Ann.

We also talked about how the world in pre-Gilead America is different from ours. She quite rightly had some questions stemming from the script, because it includes things which are not the way we do things now, but are the way that things would happen in a pre-Gilead America — things like it being the law to report moral weakness, which of course is not the law right now. There’s the question about do they go to church? It’s a question child services asks, and it’s not a question that’s typically asked or should be asked. It’s not part of our current system of how kids are looked after. That kind of moral rectitude isn’t baked into our law as it is in pre-Gilead America. But that particular question — do they go to church — came to mind, because of questions that were asked in Florida, when former felons were petitioning for the right to vote again. It’s something the panel asked: “Do you go to church?” It should have no bearing on someone’s civil liberties and civil rights, but it does creep into the public life sometimes.

The episode portrays Lydia in more intimate detail than ever before, both with a man as well as with this family she spends so much time with. It does not end well, but is your hope that the viewers find themselves sympathizing with Lydia more than before — which is a tall task, as we have seen so much monstrous behavior from her in the past?

Even our most villainous or antagonistic characters don’t think they’re villains. They think they’re doing the right thing. Lydia has gone all in on Gilead. She’s all in on the patriarchy. She’s fully committed to what she believes is preparing her girls to survive this world. This episode peeks behind the veil of where that drive came from. It’s amazing to see her with the little boy, and you see how well she connects with him and how much she cares about him. You also see how much she cares about the mother, which we see reflected in the present-day story with Janine. There’s something with Noel, the woman in the past, who’s a little bit like Janine. She’s rough around the edges, she’s not as far along morally as Lydia would like. But Lydia likes bringing people to the light and bringing people to heal.

Another thing about the episode I hope people appreciate is Lydia at one point and perhaps even still has a big capacity for love. It gets buried a lot in the discipline she’s required to enforce. I think it’s a big part of why Ann’s performance is so heartbreaking here. You see how happy Lydia could have been if she wasn’t so self-sabotaging. You see a possible future for her that she can’t let herself have. I think there’s something relatable in that. We’re looking to paint a full picture with our characters, even the ones who do dark things, because they don’t necessarily think they’re doing dark things. Illuminating a part of her past where she was different before Gilead changed the world and changed her, it’s really special to get that glimpse into her life.