Continue to The Hollywood Reporter SKIP AD
You will be redirected back to your article in seconds
Skip to main content
August 14, 2018 8:15am

When Hulu’s The Handmaid’s Tale won the 2017 Emmy for best drama series, it became the first streaming show to take the trophy in the category.

The series, which captured seven other Emmys last year, returned with a vengeance in April, with a ?second season that many felt ?was much darker, following a pregnant June (Elisabeth Moss) as ?she attempted multiple times to ?escape from the confines of Gilead. The show also expanded the world, revealing how refugees from Gilead were living in Canada and how rejected handmaids attempted to survive in the desolate Colonies.

Showrunner Bruce Miller, 53, spoke to THR about why his villains deserved their nominations, that controversial season-two ending and what he wished he’d be asked about on the red carpet.

'The Handmaid's Tale' Renewed for Season 3 at Hulu

How did it feel to receive this nomination?

I’m so happy for everybody, for all the cast and crew. They worked so hard, and some of them play very complicated and yet despicable characters — like Yvonne [Strahovski] and Joseph Fiennes. I see the hard work that they do, and I see how precise they are and how they bring all their experience to bear on every single moment and every single scene, and it’s easy to forget how exhausting and detail-oriented putting together a really good acting performance is. They worked their asses off.

This was your first season where the show wasn’t directly based on Margaret Atwood’s book.

I really think we’re still riding on Margaret’s coattails. Aren’t ?we all, really, riding on Margaret Atwood’s coattails through the world? She’s our guiding light, and the book, the world that it created, is certainly, we feel … the audience, I think, feels that we’re moving off from the central story, but we spend so much time talking about the things that happen in the book, and what are the next things that might happen. I still personally feel so connected to the book and to Margaret’s world and feel so guided by her, that any recognition that we ?get is a testament to what she did and what kind of relevance ?it can have 30 years after it was published. That’s a miracle of ?literary genius I don’t think we can even approach. 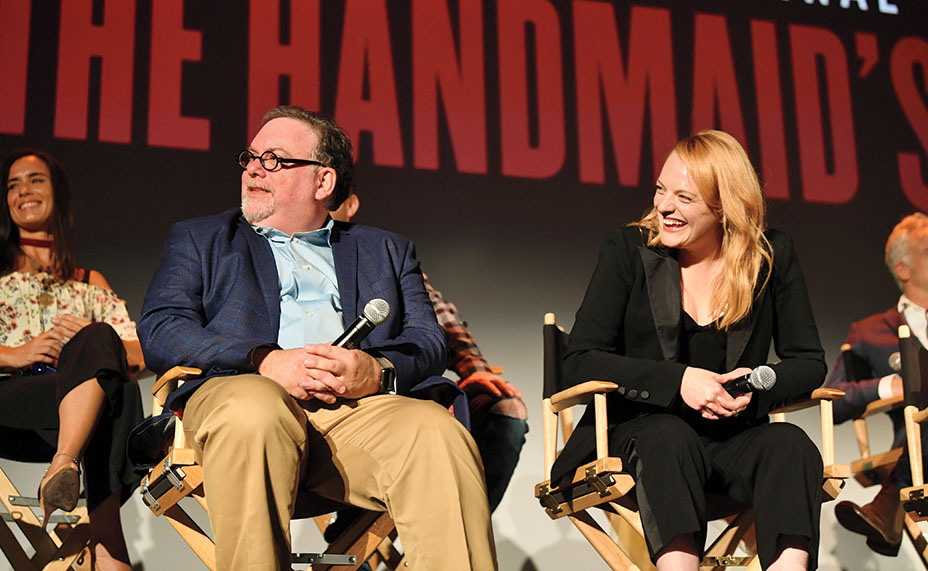 The season finale left some fans frustrated. Your thoughts?

I like the fact that people are frustrated; I was frustrated. You want her to make a different decision. ?I love the fact that June does things that we disagree with, that she’s driven by her emotions and her brain and her strategy and all ?of those things — but in different measure than we are. So I’m glad that people are annoyed by what she did and have questions about what she did, and I think the reviews help me see how people feel about it because I know how I feel about the moment. But you can’t really tell how people are going to react until you get there.

I really want people to ask more questions about my lucky socks and my lucky underwear.

“How does it feel?” Just because I never know what to say. The answer that always comes to mind is “Slightly sweaty.”

Which member of your ?Handmaid’s Tale cast is best ?suited to run for office?

In this climate? Definitely the Commander [Fiennes], because ?I think his moral compass fits ?in with the zeitgeist of today’s ?candidates.

It’s been true since the first season that the show’s themes seem to eerily parallel the current social and political climate in the U.S. But the connection was never stronger than on the June 20 “The Last Ceremony” episode. When the episode — which shows June (Elisabeth Moss) reuniting with her daughter and then being torn away from her again — aired, it was at the same time that the Trump administration’s separation of families at the border was blanketing the news. “I talked to social workers and psychologists and resident experts at the U.N. about what would really happen [in the event of such a separation],” says the episode’s writer, Yahlin Chang. “Now, it doesn’t seem so uncommon, but at the time that I wrote it many, many months ago, I was surprised to realize that this scene happens all the time, because mothers and children are often separated either because of war or because ?the child is taken away from the mother because it’s an unsafe home.”

“With Moss again leading the way, The Handmaid’s Tale continues to thrive in many of the same emotional, yet soaringly beautiful, ways it succeeded last year.” – Daniel J. Fienberg, April 16

The question of whether The Handmaid’s Tale could sustain Hollywood’s fickle affections in its second season was answered when its Emmy nominations climbed from 13 to 20. The follow-up to that breakout 2017 run did not seem to alienate insiders the way sophomore seasons so often do,?and eerie parallels to current events — children imprisoned in detention centers, a Supreme Court that could soon make decisions on the governance of women’s bodies — continue ?to earn the drama praise from an industry that’s overwhelmingly opposed to the current U.S. administration. But does any ?of that mean a damn thing when you’re going up against Game of Thrones? The Handmaid’s Tale‘s 2017 triumph came with the major caveat that ?GoT had skipped that year’s race. The HBO drama, twice the category winner, is now back in contention with enough dragon heat to set those red bonnets ablaze. ?– Michael O’Connell