Amazon’s thriller Hanna, based on the 2011 film of the same name, centers on a teenage girl (Esme Creed-Miles) raised by her father to be an assassin and chased by a shadowy spy organization. For fans of the AMC/Netflix series The Killing, it also marks the first time that stars Mireille Enos and Joel Kinnaman have worked together since the latter’s 2014 finale.

The Emmy-nominated The Killing garnered a passionate fanbase who were particularly taken by Enos’ thoughtful and reserved Sarah Linden and her streetwise partner, Stephen Holder (Kinnaman). Since then both have pursued other high-profile projects, including Enos’ turn leading the ABC P.I. dramedy The Catch and Kinnaman’s leading role in the first season of Netflix’s high-concept sci-fi series Altered Carbon.

Hanna is a far cry from the very real-world horrors of The Killing, and that difference was key to what drew both actors to the new show. The pair talked with The Hollywood Reporter about reuniting and the ease of “playing with each other.”

How did you both come to be working on Hanna?

Mireille Enos: [Writer/exec producer] David Farr approached me with the first couple of episodes of the scripts, and I happened to be shooting in England, so I was able to meet with him. His writing was really beautiful, so it looked like I was going to be signing on. They started looking for their Erik, and he didn’t tell me that Joel was on the top of his list, so when he let me know that I was so excited.

Joel Kinnaman: Well, she was actually texting me and asking me to come up with a list of 40-plus European actors, so I was compiling this list of actors that I like, and then I got I the call that they were actually interested in me, so I was checking in with Mireille and saying, “I’m going to cross Mads Mikkelsen off the list, then…” (Laughs)

Will fans of The Killing will be surprised by the antagonistic relationship your characters share in Hanna?

Kinnaman: There was a danger of reuniting and playing into the fantasy of redoing The Killing, which we definitely didn’t want to do, as it wouldn’t be fair to The Killing and the project at hand. So this is more for people who like to see me and Mireille playing together, but just in a completely different shape.

Enos: Because we’re enemies, we don’t meet up that much, but in episode four we have this play that we get to do, and it’s just filled with a lot of scenes of our history together and trying to suss each other out, and that was just great.

What drew you to the roles?

Kinnaman: It’s a combination of things. I usually start selfishly with the character and if it’s something that I’m intrigued to play, and then it’s the story and the whole. I love this character; I found it really interesting to play a man who had lived this totally selfish and destructive life and then does this one act of selflessness, and it puts his life on this trajectory to find some kind of redemption. Then there was the story — I really enjoyed the way it weaved these three genres together. It feels like it’s a coming-of-age story woven together with a political sci-fi thriller, and it’s all mixed up in this odd family drama. That was really interesting, and I could imagine that people who don’t usually watch stuff together could come together and enjoy it together. I feel like it’s going to draw people from different areas.

Enos: You know, I actually had this experience in episode six where I’d been in my little spy world, sneaking around with hidden messages, and then in episode two we meet this family, this English suburban family. When they would shoot, there was all this improvising and lots of mess, so our two storylines converge, and I was suddenly dropped into this room where people were on the floor eating peanut butter and I was like, “What’s this world? It’s so cool that I’m here!” 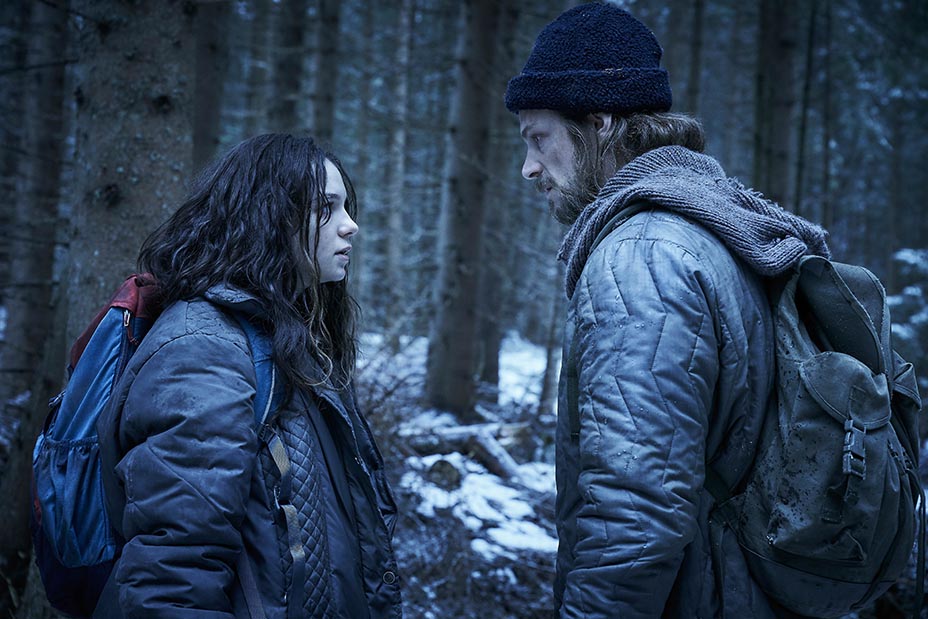 Do you feel like Hanna is a relevant story in 2019?

Kinnaman: I thought it was very cool, you know, she’s such a great character. Someone who’s so physically capable of defending themselves but completely defenseless in every other aspect of life. We follow this young person into the world and discover that a lot of what she’s been told about the world isn’t true, but that a lot of the threats are real. It’s fascinating.

Enos: Something that I think might potentially be a really powerful message for teenagers that watch this is that Erik tries to arm Hanna with tools that will help keep her safe. I think that Hanna goes through a lot of experiences that make her feel powerless, but ultimately she does have these tools. I think that those teenage years are an experience of powerlessness, and to watch this story where someone can reach for those tools will hopefully make them feel okay. There are these things I can reach for, I can speak my truth whatever it is, and make them feel like they’re in control of their experience.

Kinnaman: On the last day of shooting The Killing, we were standing on set with [showrunner] Veena Sud and [director] Jonathan Demme. We were all hugging it out and we said, “In 10 years, we’ll come together again and do something completely different.” We didn’t make it 10 years, but it’s been five years and we did this! I think it really fits the criteria that we were looking for in that it was something very different and dynamic between the characters so that it wouldn’t get confused.

And when we got to the meat of our scenes — like halfway through the show, we have a mini-play between our characters — I was just struck by how, even though I was playing this completely different character and Mireille was just completely different, we still had the same enjoyment of playing with each other. It felt like we almost immediately found this flow, I think both from knowing each other so well and playing with each other so much, so it’s just easy.

Enos: Shooting The Killing, there was a real sense of being each other’s allies through that process. Everyone was great, the directors were wonderful, everyone was collaborating beautifully. But we knew that we had each other’s backs no matter what. If there was a question about anything, we would go to each other first. We just made a really safe space. That’s special when you find that kind of ease and trust, and so it was great to drop back into that in this totally different context, just knowing that it’s super exciting working with someone that you do your best work with because you’re so curious about what they’re doing.

Kinnaman: It was good because the characters, even though they’re antagonistic, they’ve got a lot of history, so it came in handy that me and Mireille, we have a lot of history together.

Do you keep in touch with any of your other Killing co-stars?

Enos: Definitely Veena. I actually shot a film with her last year, her directorial debut called The Lie. She’s just a wonderful director. So for me it’s Veena and Joel.

This interview has been edited and condensed.