Continue to The Hollywood Reporter SKIP AD
You will be redirected back to your article in seconds
Skip to main content
March 8, 2018 10:15am
Logo text

[This story contains spoilers for the full first season of Hulu’s Hard Sun.]

Within the first scene of Hard Sun, the new thriller from Luther creator Neil Cross, the end of the world begins. Minutes later, a woman is violently attacked in her home, surviving thanks in large part to non-fatally stabbing her assailant in the face with a carving fork.

“This might sound cynical,” Cross tells The Hollywood Reporter about the way in which Hard Sun begins, “but hopefully people have sat down and are curious to see what this show is all about. This is our attempt to punch the audience right in the face.”

Consider the punch delivered — with a fork, no less.

“Exactly,” Cross laughs. “It was the most honest way we could think to announce our intent: This show, hopefully, isn’t like any show you have seen before.”

Hard Sun follows the lives of two London detectives: Elaine Ranko (Agyness Deyn), she of the brutal fork intro, and her corrupt partner Charlie Hicks (Jim Sturgess), both of whom swiftly find themselves at the heart of a massive conspiracy involving the imminent end of the world. The coming calamity shares its name with the series itself: “Hard Sun,” an enigmatic extinction-level event that will make its full impact known in five years. According to Cross, the show’s premise and two lead characters were developed almost simultaneously.

“It has a double origin,” he says of how he first developed Hard Sun. “Even though I haven’t done it in a long time, I still think of myself primarily as a novelist. Ideas always come to me character first. I had a tickle of a notion of wanting to do an anti-buddy-cop movie. Buddy-cop movies always start with cops disliking each other and gradually becoming friends. I wanted to do the opposite. I wanted to have two characters who were absolutely antithetical to one another. One would be warm and happy and full of love, but also profoundly corrupt. The other one would be lonely and damaged but incorruptible: one with the sun, one with the moon. We would know from the minute these two met, they would have profound reasons to distrust and fear one another. They would never become friends or really trust one another, but they would be forced through circumstances to collaborate in order to stay alive.”

“I had no idea what genre or world it would take place in, but I had this relationship floating around in my head,” he continues. “One day, I was sorting out my vast overspill of books, boxing them up for my local charity, all while playing music. David Bowie’s ‘Five Years’ came on. It’s a song I’ve loved since I can remember, really — since my sister played it for me in the late ‘70s. It’s a song that’s ostensibly about the end of the world, where you learn the world has five years left. Having received this news, he goes wandering across a British market town. In lesser hands, this would have been a death metal dirge. But it becomes a song about in the light of our imminent destruction, everything and everyone has infinite value: all the tall and short people, all the fat and skinny people, all the nobody people and all the somebody people. Instead of becoming this self-indulgent dirge, it’s this delicately triumphant song about the value of the here and now. As I was packing my books, I realized it: That’s the world I can put these characters in.”

Throughout the six-episode first season (which Cross hopes will be one of potentially five seasons, though an exact number remains murky, as does an official renewal), inspectors Renko and Hicks not only deal with the ramifications of learning about Hard Sun, they also must deal with a vast array of vicious killers, including one who becomes nicknamed “The Good Samaritan Killer,” played by Richard Coyle. Cross credits his inspiration for the character with a desire to subvert fears of “random ISIS attacks,” someone who commits violence justified through religion.

“I wanted to take a figure like that, a figure who sees himself — and it’s always a him — standing in some way in direct relationship with God,” he says. “But I wanted to reverse it. I wanted one of these people to challenge God. Instead of God justifying him, which is the implicit claim on most of their lips, I wanted him to say: ‘God, if you’re there? Stop me.’ 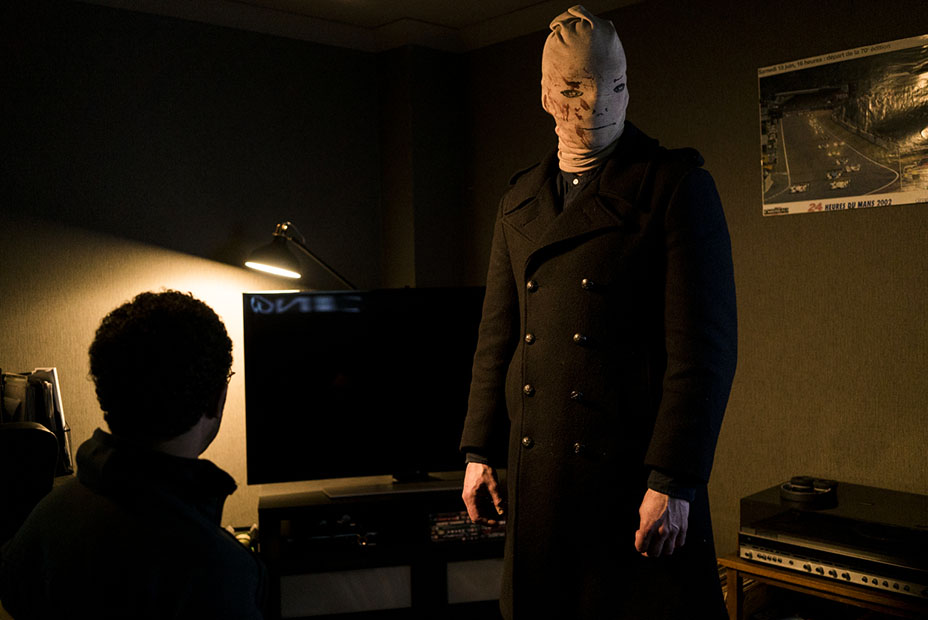 “Every villain I’ve ever come up with has popped up into my head at some point of terror,” Cross says, speaking not only toward the bloody rogues gallery at the heart of Hard Sun, but also the villains found in his other works, including the equally gruesome Luther. “It’s usually when I’m in London, alone, late at night, walking down an empty street. The wind is blowing through the trees behind me. You get this sense that somebody is 100 meters behind you. All of your animal instincts are suddenly alert. All the hairs on the back of your neck are standing up — and it’s just a shift worker coming home or a shift worker getting up. But in that moment of pure irrational fear, my imagination always goes into overdrive. That’s where the origin of them comes from: a personal experience of anxiety.”

Through his personal experience of anxiety, Cross imagines unspeakably heinous acts of violence. Early on in the series, Hicks and Renko contend with a man who murders several members of his own family via hammer, shotgun and other assorted means. Toward the end, a man dying from illness sets about kidnapping suicidal victims to save them from themselves — by lobotomizing them. The very first kill of the season involves a man falling from a 15-story balcony and landing in a tree, fully impaled. If the viewer is uncomfortable with the acts depicted onscreen? Mission accomplished, according to Cross.

“It’s not something that arises cynically in an attempt to manipulate,” he says about the show’s depiction of violence. “It’s not something I’m exploiting in order to titillate people. It’s frightening because it’s designed to be frightening. I never write about what I fantasize doing to other people. I write about what I’m scared other people might do to me. Although it’s hopefully shockingly violent, it’s meant to discomfort the audience in the way it discomforts me. It’s not meant to be semi-pornographic. It’s supposed to be visceral and shocking and frightening.”

Indeed, Cross hopes to capture the “shocking and frightening” times in which we live. Before the end of the second episode, news reports break about Hard Sun, and are swiftly refuted by the government. The killers featured throughout the season are largely galvanized by what they are rightfully perceiving as the end of the world, despite authorities wrongly stating otherwise.

“I don’t want to brandish around as cheap a phrase as ‘fake news,'” says Cross, “but we seem to be living in an era I define as an epistemological crisis. We no longer can trust how we know the things we believe we know. I first became interested in this after 9/11. The denials and the conspiracy theories were emerging as the towers fell. The way people tried, in all evidence to the contrary, to reorder the world in their own imagination.… That event really was the beginning of where we are now, with this crisis of knowledge we’re facing.

“We have an entire Western world which has access to more knowledge than anybody in history has ever had access to, and yet, we’re all subject to the same confirmation biases we had in the 17th century,” he continues. “It’s extraordinary to watch. What the Internet has allowed us to do is stand witness to how people use their truth. A lot of the treatment of the news in Hard Sun is a way of telling how people use their truth. It’s not just about governments lying and spinning; it’s about our own choices. We decide what we believe before we assess the evidence. It’s not even deliberate; it’s something we’re all prone to. The Internet accelerates that process.”

There will be no need to lean on the Internet to process the truth of what’s coming next: Hard Sun ends its first season with irrefutable proof that the apocalypse is indeed on its way. In the closing scene of the season, Hicks and Renko are moments away from executing their mutual enemy, a deadly government agent named Grace Morrigan (Nikki Amuka-Bird, one of a few Luther alumni cast in very different roles for their newest Cross collaboration), when all three of them become awestruck at an image in the horizon: the sun, red and bad, hanging overhead and oozing looming dread.

“It’s the first blast of the trumpet,” Cross says of the season’s final moment. “It’s the announcement to the world: The end is coming, and we are not going to be saved. In a weird, cosmological sense? It’s the Antichrist. The end of the world really is nigh. I would like to spin out further stories in the light of the certainty that it’s happening.”

Exactly what’s happening, however? Cross remains coy as to the exact nature of the Hard Sun event, though it will become clearer should the show return for an additional season: “I know what it is, and I kind of don’t think it matters. There was a great headline in The Onion many years ago: ‘World’s Biggest Metaphor Hits Iceberg.’ That’s the territory we’re in. I absolutely know what it is, but it doesn’t matter. What matters is the knowledge that this is the end.”

“The world [of Hard Sun] will know,” he adds. “At the end of season one, it’s the big announcement. The world knows. What happens next? The idea is to keep unraveling the crisis in different ways.”

It’s all building toward the final crisis. As Cross makes clear, there will be no avoiding the apocalypse teased at the outset of the series and in the final moments of season one. Putting it another way?

“This is a world without Bruce Willis,” he jokes. “The end is nigh… unless we’re offered a sixth season!” 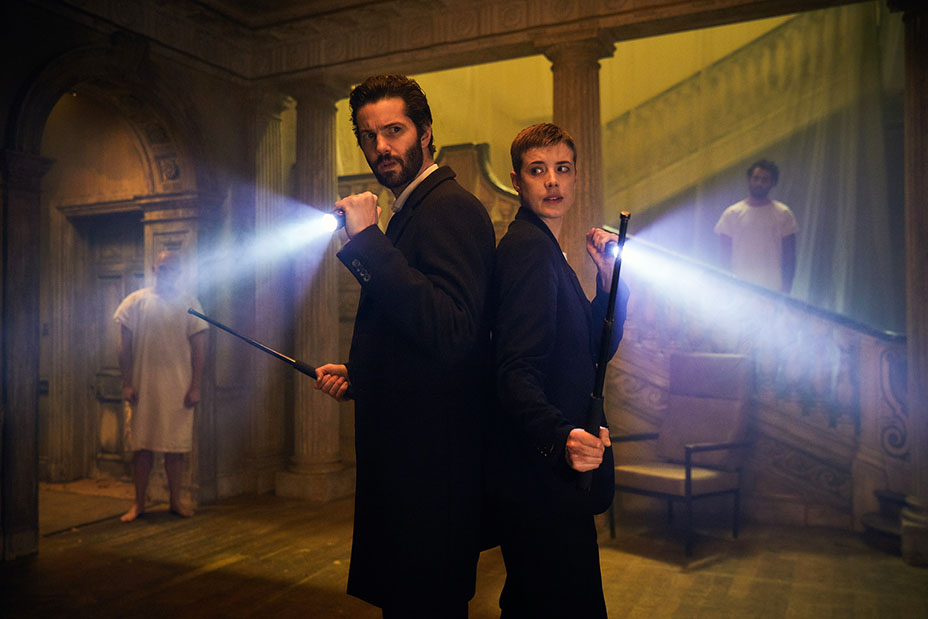 What did you make of Hard Sun? What are your predictions for future seasons? Follow THR.com/LiveFeed for all of our coverage of the new Hulu series, currently streaming the full first season.