After high-profile fizzles from Chelsea Handler, Michelle Wolf and Joel McHale, Netflix is placing its next talk show bet on Hasan Minhaj, the Indian-American comic who broke out as the host of the White House Correspondents’ Dinner in April 2017 and the star of his own Peabody-winning stand-up special, Homecoming King, one month later. Minhaj’s weekly Patriot Act begins its monstrous 32-episode order Oct. 28, taking it right up until the 2020 election.

As Jon Stewart’s final hire on The Daily Show, Minhaj, 33, traces the idea for his show — which will be taped before a live audience in New York, where he lives with his wife and 7-month-old daughter — back to a conversation with his old boss. “I asked Jon why he was leaving and he said, ‘I’ve manipulated this chess piece in every direction that I could over the past 17 years. It’s time to pass that torch on to other performers and see what they can do with it,'” recalls Minhaj. The Davis, California, native has ruminated on those last eight words, asking himself how he might cut through the content glut by “distilling the coffee that is news into comedy espresso and doing it in a visually interesting way.”

So Minhaj threw out the late-night playbook. After all, “Netflix, as a platform, to me is not fundamentally bound by time,” he points out. “People actually go to Netflix to escape time.” So no fake city skyline, no jib shots out to a commercial break, no suit and tie. Instead, imagine Patriot Act as a “visual podcast” meets “one-man show,” he says, explaining that the episodes (which will vary in length) “feel like a stand-alone miniseries that’s Trojan-horsed into a weekly show.” 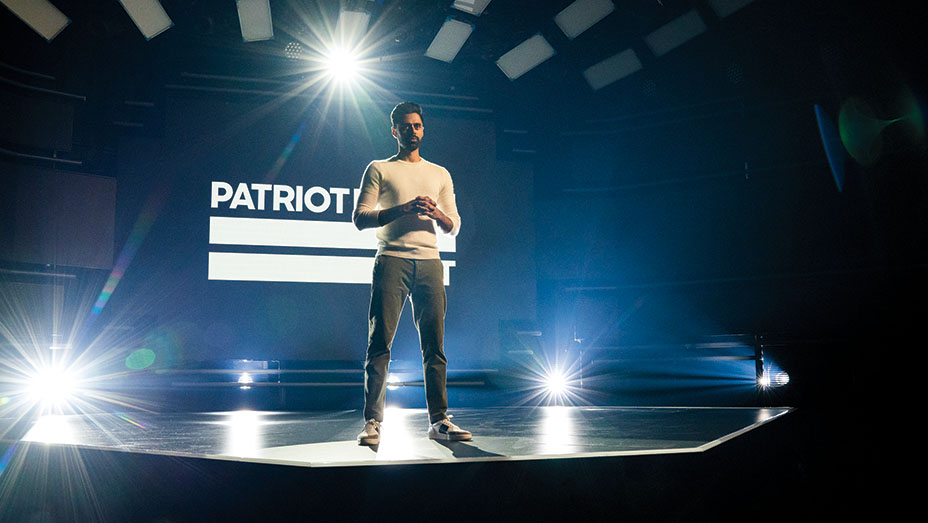 As he did for Homecoming King, he’ll make frequent use of immersive, wall-to-wall screens, larger-than-life infographics and dynamic lighting. The setup, designed by music vet Marc Janowitz, will look more like a concert stage than a talk show set. “If you can’t pay attention to the show,” says Minhaj with a laugh, “I really can’t help you.”

Another divergence from the form: He plans to mention Trump “very little,” he insists. “I don’t want to be the 19th hyena jumping on the carcass of covfefe.” In lieu of jabs at the president, Minhaj will delve into substantive analysis of complex issues — from affirmative action and gun control to foreign elections and immigration — with each episode mostly devoted to one subject (a la John Oliver’s Last Week Tonight). “I want to do deep investigative reporting,” he says, “and then some stuff that just makes me angry that I’ll talk about for four minutes that’s just funny for funny’s sake.”

To conjure up that substance, Minhaj enlisted a handful of New York Times, Vice and ProPublica reporters to join his writers room. He also recruited Daily Show and Veep alum Jim Margolis to showrun, while his frequent collaborator Prashanth Venkataramanujam (they wrote his WHCD speech together), will serve as co-creator and executive producer.

“The big wall I was hitting in covering daily news was that the story always felt a third of the way done. It felt like comedy sugar, where it’s fun to joke about it in the moment but then you leave it 20 minutes later and as a viewer you’re like, ‘So what am I supposed to do with this now?'” says Minhaj. “I want to provide an Act Three.”