The month of October brings about ghost stories, bumps in the night and haunted houses. Netflix has particularly gotten in on the scares (and the fun) of the season with its new horror series The Haunting of Hill House.

The show is an adaptation of Shirley Jackson’s1959 work of the same name, a piece cited as one of the greatest ghost stories ever told and which has spawned several film and stage adaptations. Bringing Hill House to a serialized format, however, involved tweaking the formula. Rather than the eponymous haunting occurring with a series of individuals recruited to study the paranormal, this take puts an unlucky family of seven at the center.

“I’m just naturally drawn to family drama,” series creator and horror guru Mike Flanagan (Hush, Oculus, Gerald’s Game) tells The Hollywood Reporter. “I think in horror, in particular, the way people behave in their families is different than the way they behave out in the world. It strips away all the pretext.”

Using that logic, Flanagan composed what he considers a “remix” of the original story. One big deviation comes with the use of time. Action constantly shifts between the Crain family’s spiritual encounters in their residence and their lives decades later.

“I feel like when you talk about a person being haunted, a ghost is boring unless it’s directly tied to an experience, emotion or something that’s intrinsic to a character,” Flanagan says. “We’re all haunted as people.” Getting to see the family members as both children and adults shows that the haunting has transcended the walls of Hill House, years later still drawing them to the events that occurred there.

Before Netflix subscribers enter through the ominous double doors of Hill House — the season drops on Oct. 12 — THR walks through the characters who make up this terrifying tale.

The oldest Crain child has turned wounds into writing, having become a famous horror author. He made it big with his autobiographical The Haunting of Hill House, a work whose success causes a rift between him and Shirley (Elizabeth Reaser). But despite having a knack for the occult, Steven refuses to let that bleed into his real life, always looking to ascribe a natural reason to a supernatural event.

Like her brother, Shirley’s adult life has taken a turn into the macabre, as she runs a funeral home with her husband Kevin (Anthony Ruivivar). Though the traumatizing events in Hill House have left her the most hardened of the Crain children, her heart is far from six feet under. Shirley’s sensitivity carries over from her childhood, an attitude that is putting her business on the brink of financial ruin.

Theo is the middle child and designated black sheep of the family. Her lifelong practice of building walls to keep herself safe has left her feeling as cold as she did walking the halls of her former home. To that effect, she’s rarely seen without her gloves and refuses to engage with even her family on a physical level.

The years since leaving Hill House have been the least kind to Luke. As a kid, he saw the world through thick glasses, facing scrutiny for his unbelievable claims. As the years passed, Luke sought out a type of comfort outside of his supposedly imaginary friends: a heroin needle. Now a recovering addict, he struggles with the ghosts that haunt him from both his distant and recent past.

Though she shares a connection with her twin brother Luke, Nell seems to be the most tethered to the events of her childhood. She still recalls memories of seeing the “Bent Neck Lady” throughout the house, and her sleep paralysis has left her mentally unstable and blurring the lines between sleep and reality.

It seems fitting that the family’s patriarch is played by Hutton and Thomas, two actors who are known for their own eventful childhoods as stars of Ordinary People andE.T., respectively. Hugh enters Hill House a wide-eyed house flipper who never faced a problem he couldn’t fix. As time passed, Thomas’ bright blue eyes turned into Hutton’s steely gray, as the elder Crain has pulled himself away from his children and the events that haunt him to this day. 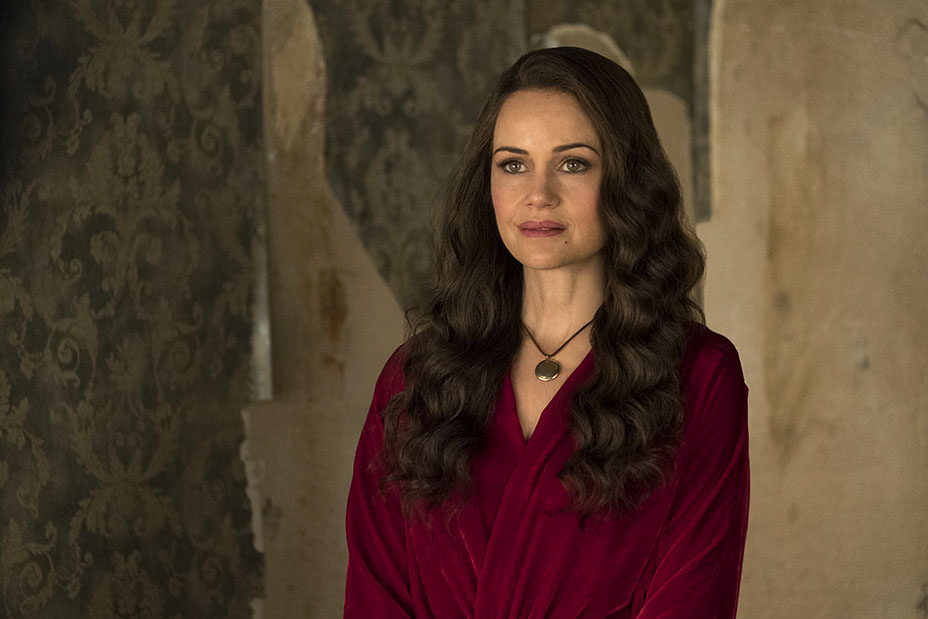 Olivia is the heart of the Crains, Hug’’s partner in crime and an extremely caring mother. As the kids explore both the home and their adolescence, she’s there with a smile and a platitude to assure them everything will be fine. But amid her tension headaches, the architect is always looking to the next thing she needs to do to get her family into their “forever house.”

Rounding out the cast are Robert Longstreet and Annabeth Gish. They play the Dudleys, married caretakers of Hill House who watch the actions of the Crains with a cautious eye, knowing the history of what occurred inside the home.