On April 3, HBO toasts the final season of Game of Thrones with a splashy Radio City Music Hall premiere in New York. But quite a few staffers are feeling bittersweet as they glad-hand their way through the show’s victory lap. Come mid-May the network’s longtime cash cow, likely the most popular TV series in the world, airs its last original episode — setting the stage for heightened pressure to milk Thrones IP for new parent company AT&T, which acquired Time Warner assets for $85 billion. “Game of Thrones has become the cornerstone of HBO,” says Craig Moffett, telecom analyst and founding partner at firm MoffettNathanson. “Losing it was always going to be painful — even more so now that they’re losing a big chunk of their management ranks.”

Moffett is speaking, of course, of the recent exit of longtime CEO Richard Plepler and several other top-ranking executives who jumped ship as TV’s perennial beacon of prestige braces to be subsumed under the broader WarnerMedia umbrella to bolster its forthcoming streaming platform. With a viewership that now climbs past 30 million an episode in the U.S. alone, Thrones will be a vital selling point on that platform even in death — just as the vault of animated features and Star Wars library will be to a forthcoming competitor, Disney+.

For HBO, the priority is now building on Thrones‘ success by getting a spinoff ready for prime­time. At least four “successor” series are in various stages of development. One, written by source material author George R.R. Martin and filmmaker Jane Goldman (Kingsman: The Secret Service), will shoot a pilot over the summer. Two-time Oscar nominee Naomi Watts is among those attached to star. The network famously took its time with the original Thrones, which spent four years in development and saw 90 percent of the pricey original pilot reshot after recasting (each of the final six episodes cost far more than $10 million to produce). But that’s a small price to pay considering some analysts now value the franchise at worth well over $1 billion. 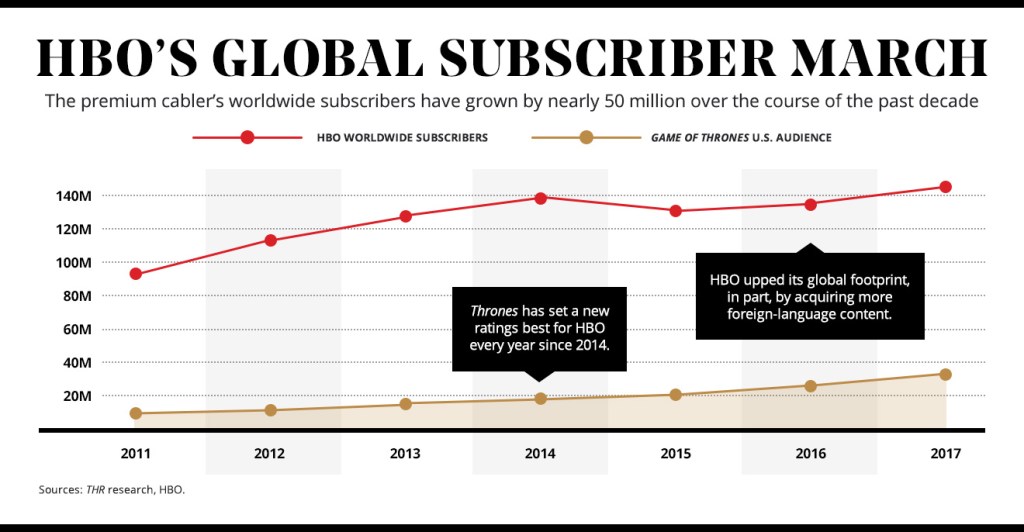 Some sources question whether WarnerMedia CEO John Stankey’s new regime will allow such patience and lavish expense this time around. Stankey has been clear since his arrival that the mandate at HBO is to produce more content to keep up with the crush at Netflix and Amazon. In the wake of Plepler’s departure and the addition of former NBC chair Bob Greenblatt to the WarnerMedia ranks, Stankey spoke with THR about the shift in output that’s already taken place in the past year with the release of at least one “meaningful and significant piece of content” every month. With output only set to climb further, the current industry expectation is that HBO’s development timeline will likely tighten.

To be sure, a spinoff is also no guarantee of success. AMC, most notably, has found decent ratings and stability in companions to behemoth hits The Walking Dead and Breaking Bad. But neither of the follow-ups, Fear the Walking Dead and Better Call Saul, ever managed to pull even half the audience of what the parent series did at their peak.

“We want to be careful to not overdo it,” HBO programming president Casey Bloys told THR in February, cautioning that multiple spinoffs were neither the plan nor out of the question. “Game of Thrones has been an incredible show for us, but what we’re doing is a much more diversified slate so that we’re not in a position that we have to [keep] the franchise up and running or the lights are going out at HBO.”

HBO remains a formidable TV power with or without Thrones. Carriage fees are at an all-time high, averaging $7.77 a month, per S&P Global Market Intelligence. With cord-cutting skyrocketing, the network’s OTT service is picking up the slack. Streaming-only HBO Now topped 7 million U.S. subscribers in 2018. That same year, the only one since Thrones‘ 2011 debut not to feature an original episode because of an extended production hiatus, the cable channel and its sister streamer pulled an estimated $6.6 billion in revenue and operating income north of $2 billion.

And HBO will use Thrones‘ final season as a promotional platform for upcoming series — chief among them Big Little Lies‘ second season, the Zendaya drama Euphoria and Damon Lindelof’s Watchmen adaptation. As for the most promising heir apparent, it’s anybody’s guess, but sources say the company is particularly high on upcoming dramas a bit further down the line from genre heavyweights Joss Whedon (The Nevers) and J.J. Abrams (Demimonde). 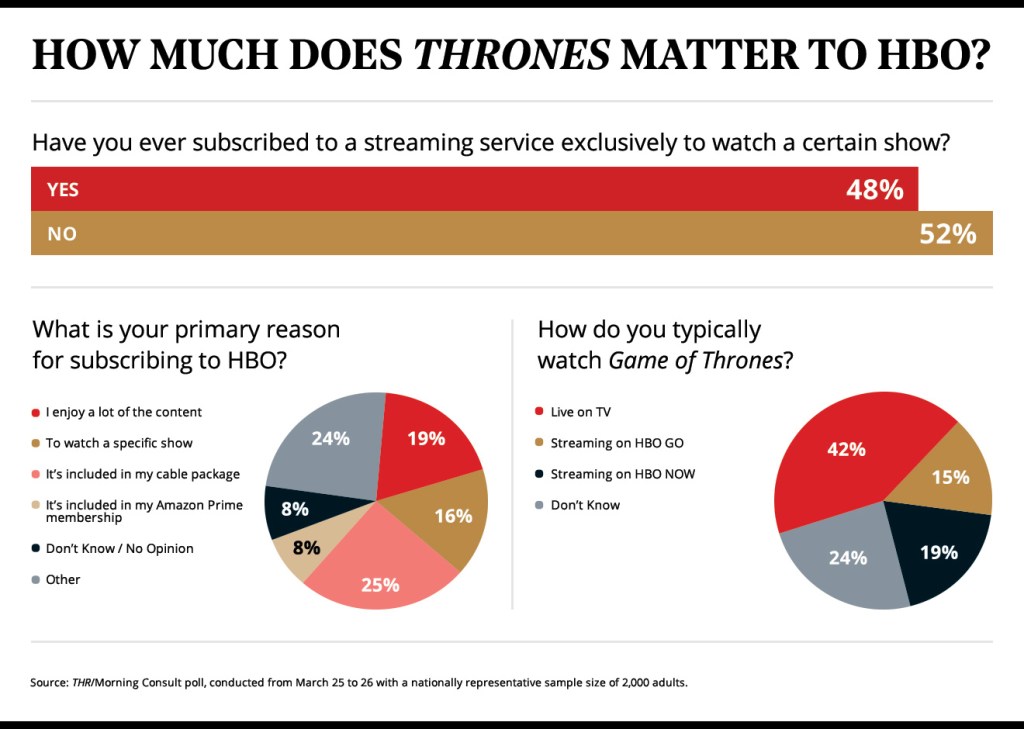 Losing a massive TV hit is rite of passage, not to mention a rich problem, but where HBO’s current scenario differs is in its revenue model. Sure, CBS will lose viewers when The Big Bang Theory wraps its stunning run as broadcast’s top series the same week that Thrones signs off. But the broadcast network won’t lose any paid subscribers. And while there’s no evidence correlating premium TV subscribers to any one particular show, the fact remains that HBO’s global footprint has increased by 52 percent in the eight years since Thrones premiered. Some of those 142 million worldwide subscribers may exit with the show.

A THR/Morning Consult poll conducted March 25 and 26 reveals that, among a sample of more than 2,000 U.S. adults, 28 percent have canceled a subscription to a streaming service after a show they liked stopped airing. Of that same group, nearly half admitted to subscribing to a service just to watch one show.

But as nine-figure streaming deals for the Friends, Seinfeld and The Simpsons libraries illustrate, it’s not just new shows that help lure and maintain subscribers. For now, HBO and WarnerMedia can at least take comfort in the fact that 73 episodes of Game of Thrones will be theirs in perpetuity — not that it takes pressure off the proposed spinoff and other projects in the pipeline.

“Once you have a global hit like Game of Thrones, one that transcends the audience you thought you knew and could rely on, the bar is just very different,” says one top TV literary agent. “Hollywood has always chased success by looking to patterns. Why else would Amazon be spending $1 billion on Lord of the Rings?” 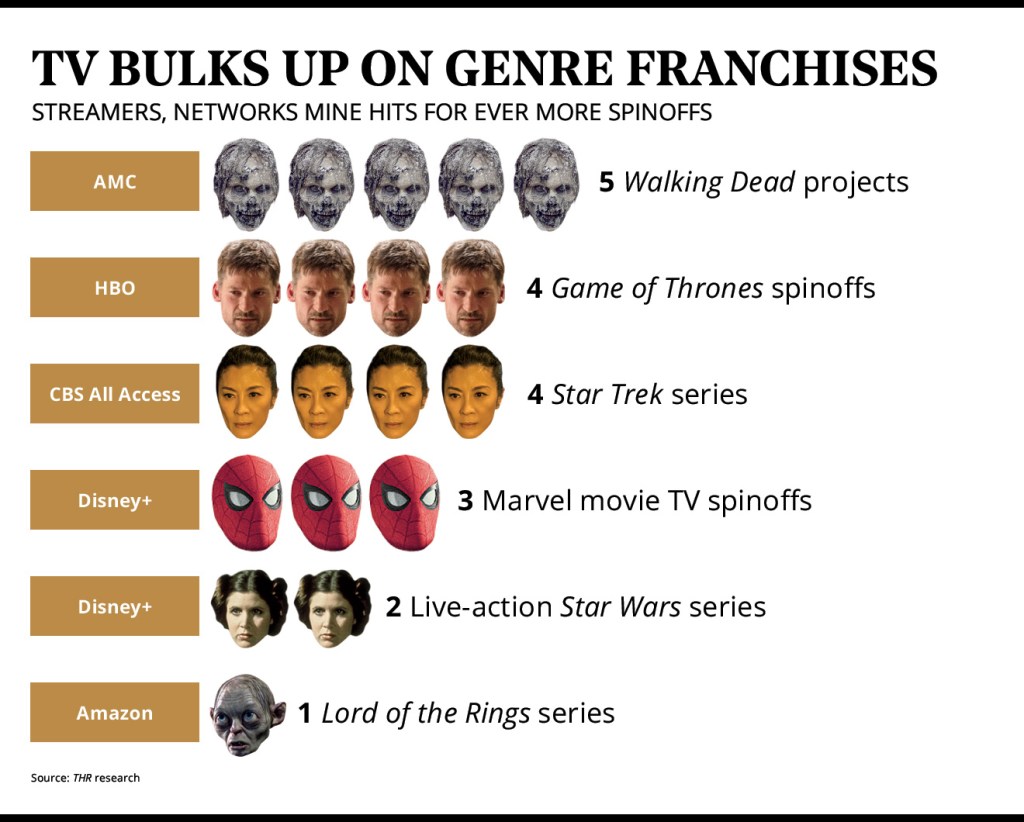