On June 16, casual TV surfers (and AT&T executives) might be surprised if they check out what’s on the company’s HBO channel: an erect penis. It’s just one of many jarring elements of Euphoria, the new teen drama that offers perhaps the most unflinching, not to mention explicit, take on modern adolescence ever to hit U.S. television.

The male genitalia in the pilot is not attached to any of the largely 20-something cast. Instead, it’s care of actor Eric Dane, who commits statutory rape with a 17-year-old trans girl (newcomer Hunter Schafer, 20). Though the sequence uses a prosthetic, it’s still likely to shock most audiences — as will a handful of other graphic scenes in the pilot, from a gut-wrenching drug overdose by star Zendaya, 22, to a sex scene between teens involving choking. In one episode alone, close to 30 penises flash onscreen.

“There are going to be parents who are going to be totally fucking freaked out,” says Euphoria creator Sam Levinson, 34, son of director Barry Levinson, who wrote all eight episodes based on his own past struggles with addiction. It is for these and other reasons that former HBO chairman Richard Plepler would often tell people the series makes Netflix’s teen suicide drama 13 Reasons Why look like an after-school special. “It’s a good insight into how hard it is to grow up in this time,” says castmember Maude Apatow, 21, who’s hoping her parents, Judd Apatow and Leslie Mann, watch the Drake-produced series. Adds HBO programming president Casey Bloys: “We’re not trying to put out a Gossip Girl.“

The show arrives with business implications as well. Amid the #MeToo movement and a re-evaluation of sexual mores and politics in the digital age, HBO is attempting to create buzz among a newer generation when so much of the 500-plus-show universe is lost on young people. The premium programmer’s mandate under new parent AT&T is to ramp up content to compete with streaming rivals; that the network is doing so in the YA space is no surprise given the success of the genre on digital platforms, particularly Netflix.

While Euphoria isn’t likely to fill any Game of Thrones-size voids at the network — as even one HBO insider admits of the show, “It’s not for everyone” — it’ll inevitably get people talking. Still, “It’s not sensational to be sensational,” says Bloys, noting that the point of the show is to expose an adult audience to the challenges of growing up in 2019, and that many of the scenes come directly from Levinson’s life. “It may seem boundary-pushing, and the idea of putting them on TV may be, but somebody lived them.” 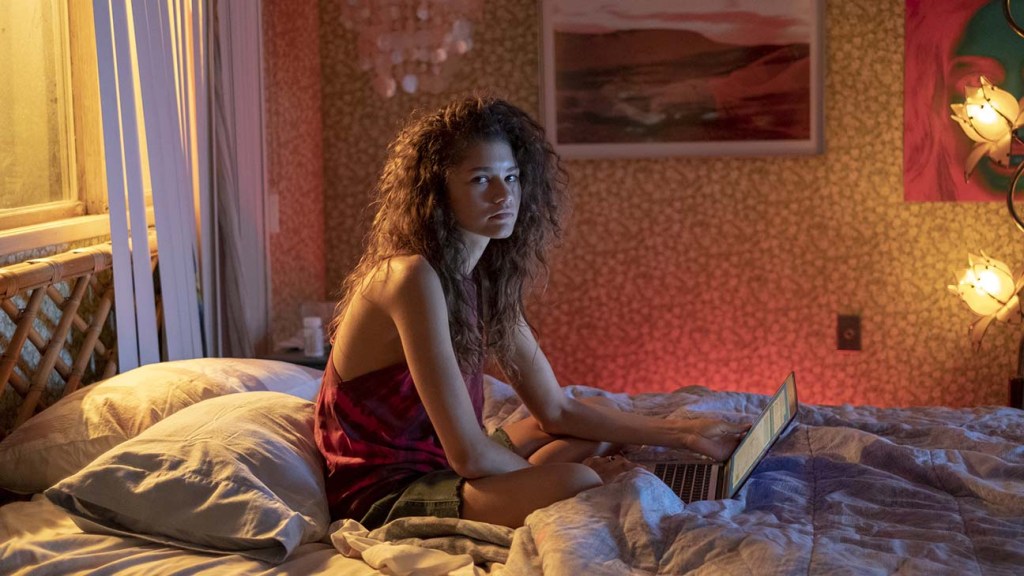 The risqué material was even too much for a principal castmember. While shooting the pilot, actor Brian “Astro” Bradley, 22, a former X Factor contestant and rapper signed to Nas’ label, wanted out of the show. Details surrounding his exit are fiercely guarded, but sources say Bradley was uncomfortable shooting scenes that weren’t in the original pilot script and suggested his character would experiment with homosexuality in future episodes. After a lengthy back-and-forth with producers, HBO stepped in and replaced Bradley with The Hate U Give‘s Algee Smith. They reshot his parts in the pilot, including an intense sex scene with 21-year-old actress Sydney Sweeney, who says of the recasting, “Let’s just say I’m very glad that Algee is playing the character.”

Despite HBO’s enthusiasm for authentic and edgy content, the network does have its limits. According to Levinson and Zendaya, execs pushed back on two scenes. One was the opening shot, which in the final version begins with Zendaya’s character narrating her birth. “I was repeatedly crushed over and over by the cruel cervix of my mother,” she says as a CGI clip of herself as a baby in utero plays onscreen. But Levinson actually wanted to start with a dolly shot that began on the lights in the hospital room, boomed down behind a doctor and went straight between her mother’s legs and into her vagina. “They were like, ‘Nah, you can’t open it that way,’ ” says Levinson. “I just thought, ‘It’s a battle I don’t need to fight right now.'” They had already shot the scene, though, and actress Nika King, who plays Zendaya’s mom in the show, says she had another actress step in to portray the most intimate part. “Her vagina got credit, don’t worry,” she says. “It’s on IMDb Pro, I promise you.”

The network also voiced concerns about a scene in the second episode featuring dozens of naked high school boys in what Levinson intended as a gender-bent homage to the famous Carrie locker room scene. What made it to air is a trimmed-down version of the original shot, which included “like, 80 more” penises, he says. That may not sit well with some viewers, as Parents Television Council president Tim Winter argues that the series “appears to be overtly, intentionally marketing extremely graphic adult content — sex, violence, profanity and drug use — to teens and preteens.”

What did stay in the series is a tongue-in-cheek montage in which Zendaya deconstructs the art of a dick pic. “We can get away with a lot of shit with comedy,” says the star, who’d been searching for a reputation-busting role that would signal her transition from Disney Channel to adult actress. “I’ve only really done family movies, so everybody sees me a certain way and doesn’t assume that I can do [a part like this] — or that I want to.”

Sources say the actors, who knew when they signed on that nudity would likely be asked of them, could decide before the scenes what they were comfortable showing. “It was really tough for me. It was a huge back and forth in my head about whether I wanted to be nude or not,” says actress Alexa Demie, 24, who ultimately decided she was OK with showing her breasts in a non-sex scene in which she’s changing with her girlfriends because it felt so much like real life.

As is the new norm at HBO, the network employed an intimacy coordinator, Amanda Blumenthal, the daughter of production executive Ginny Nugent. “If you got a visit from Amanda that day, you knew it was going down,” says actress Barbie Ferreira, 22, who had to film a scene in the third episode in which an obese man on a webcam pulls out his micro penis and masturbates to her. “I just remember everyone on set gasping,” she says, noting that her and the other actor had an actual Skype call that played live on set. At first, Blumenthal tried to use specially made coverage pads for sex scenes that proved useful on The Deuce, but she found they weren’t that helpful because the actors were rarely in the missionary position.

It’s hard to ignore that a show as racy as Euphoria is arriving at a time when there’s at least a perceived culture clash between the Dallas-based AT&T and its freewheeling cable network. It’s safe to say WarnerMedia chief John Stankey, who counts Downton Abbey among his favorite shows, is not the target audience for Euphoria. But Bloys insists there has been no interference in the creative process on any HBO shows: “No one has come to us and said, ‘Hey, tone this down,’ ” he says. “The only thing they’ve done is given us more money and said, ‘Keep doing what you’re doing.'”

A version of this story first appears in the June 12 issue of The Hollywood Reporter magazine. To receive the magazine, click here to subscribe.