The Mosaic miniseries airing on HBO is the result of a three-year process sparked by an idea from Steven Soderbergh.

No stranger to innovative storytelling, the Oscar-winning director was inspired to explore a more interactive experience with narrative, so he began with a 10-minute prototype. That undertaking, titled The Departure, sees a couple entering a hotel lobby where a seemingly innocent event occurs. When coming at the same event from different perspectives, however, the incident proves not so innocent. Soderbergh filmed it in one day and then he and partner Casey Silver built a new technology around the story.

The end result, according to Mosaic writer Ed Solomon, was that Soderbergh thought the experiment was pretty cool.

“I got a call and he said, ‘Hey, are you interested in trying to do a bigger idea?'” Solomon tells The Hollywood Reporter.

And that is how the idea for Mosaic began to take shape.

On Monday, the linear version of Mosaic arrives on HBO as a six-part miniseries. Airing across five nights — with a double-episode finale Jan. 26 — the murder mystery follows the disappearance of famed children’s author Olivia Lake, played by Sharon Stone, and the ensuing investigation by the police and civilians who attempt to uncover the truth about what happened in a picturesque Utah resort community.

The miniseries unfolds chronologically, with flashbacks utilized to follow the characters in both a past and present timeline. As is typical with all TV series, there is a beginning, middle and end.

The story, however, was conceived as a mobile interactive experience, the first of its kind to be produced by Soderbergh and Silver’s PodOp company, and actually launched in its intended form two months ahead of the HBO debut. (The app is now available for download on IOS and Android, and can be viewed on desktop here.)

'Mosaic': How an HBO App Lured Fans Months Before the Miniseries' Premiere

When Soderbergh had first approached Solomon about the idea after the Departure experiment was a success, the writer of Men in Black and Bill & Ted fame told Soderbergh he was intrigued by the notion of somebody investigating a murder and realizing that the guilty party may not actually have committed the crime. Soderbergh said he wanted to do a story in an isolated resort town centering around a woman who is a “larger-than-life character,” a person who walks into a room and the “molecules polarize around her.” She gets killed and a few years later, something happens where the case gets reopened.

The pair threw ideas around for a year before kicking into high gear. By June 2015, “we had hundreds and hundreds and hundreds of scenes up on this wall,” says Solomon of plastering whiteboards with multi-colored index cards that contained the scenes that would make up Mosaic‘s story. “[Soderbergh] said, ‘Let’s shoot it in November’ and I’m thinking: ‘I have 500 pages to write by November.'” 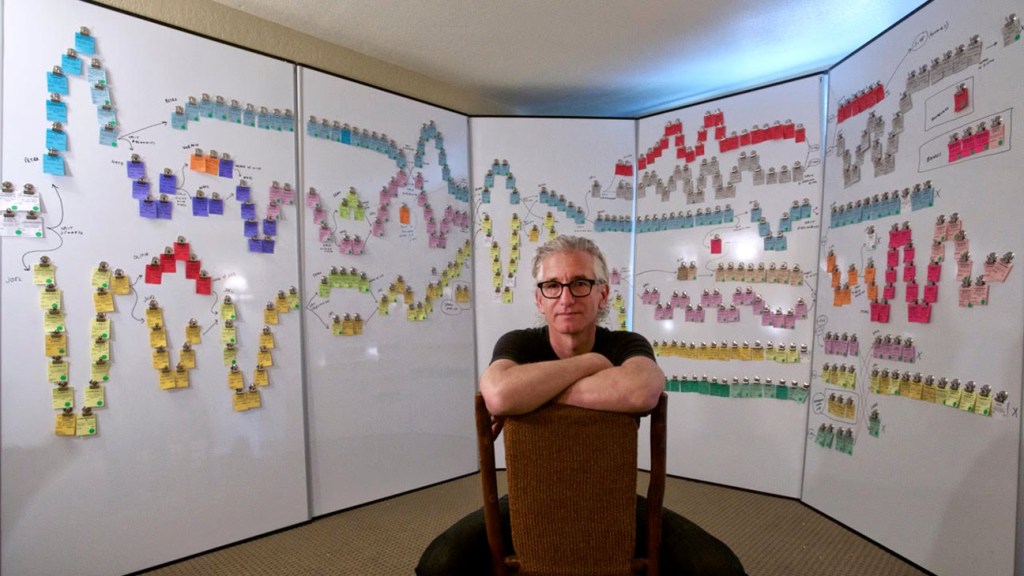 Solomon wrote one script, with the outline presented chronologically, for both the app and HBO versions. He then transferred the scenes to hand-written index cards: “We sat in the center of the room and pulled the index cards down and decided on the correct storytelling order for the app version, which was different than the chronological order of events. It gave us a good basis for going back to square one and rebuilding the story.”

In the original script, the “larger-than-life” character was given the name of Sharon, as Solomon and Soderbergh imagined Stone in the role. “We initially called the character ‘Sharon’ because we thought, ‘Who would be perfect for this part?'” Solomon recalls, adding that his very first text to Soderbergh about the project was about Stone. “Then when we realized Sharon [Stone] was actually going to do it, we of course had to change the character’s name [to Olivia Lake].”

They shot Mosaic in two parts in Park City and Salt Lake City; beginning with the past-tense storyline in the fall of 2015, followed by the present-day sequences in early 2016. Soderbergh encouraged the cast to alter their appearances during the three-month break to help distinguish between the two storylines.

“I wrote the first part — 265 pages — and then we started shooting the past storylines,” Solomon recalls. “We had so many ideas while we were shooting that we even added about 100 pages. Because the format was so new and because there were no antecedents for this kind of storytelling, we were just making it up as we went along. We just kept getting ideas as we were going.” When they returned for the second part of filming, the script was 500 pages, referred to as a “tome” by the cast.

Since the app version is told through branching narrative to show multiple perspectives, the same scene was shot multiple times at Soderbergh’s quick pace — “Sometimes on one day, we would shoot the same scene three different times from three different points of view,” Solomon says — and the actors were given individualized scripts. They only knew their own storyline and how the tale ends from their character’s perspective.

“We had to actually create characters that no matter where they are in the story, they could be worthy of their own movie. Every character in the story could be the lead,” says Solomon. “We didn’t want them to know what their character didn’t know.” The instruction to not share storylines until the end of filming was an easy order because, as Solomon jokes, “Every actor basically thinks they are the star of every film they are in.” 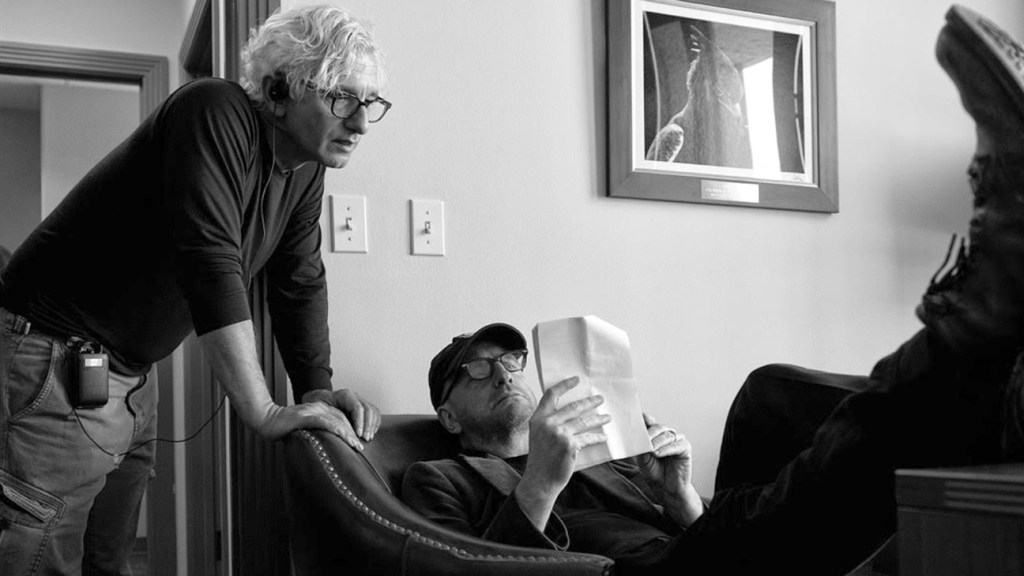 The rest of 2015 belonged to the editing process and technology build for the app, and, after filming was complete, the pair began to tackle the linear version for HBO.

“We knew pretty early on we had to do a linear cut so, how do we do that?” says Solomon. “We didn’t want it to feel like you could just tell the story in any direction; we wanted to make sure that whatever direction was chosen, it was an optimized story. That you were seeing the best story for that point of view. So we also thought that we would develop something to tell the story in a traditional television format.”

In response, Soderbergh rebuilt the HBO version from the ground up. “From the footage itself, he built a new story,” says Solomon.

The result is a subjective, rabbit hole-like storytelling version in the app, and a more objective and omniscient unfolding of events in the linear miniseries — the latter being Soderbergh’s “cut.” The app has nearly eight hours of content to explore; whereas the miniseries plays out over six episodes. In the app, the viewer selects a character’s POV and follows that through the story.

“The two versions are totally different narrative experiences of the same set of events,” Solomon explains. “The app version is a very subjective telling of it. In the app, the viewer selects a character’s point of view and follows that through the story. When you get through the end of a certain character’s ‘line’ you may not — just like the character — actually have the full picture, or the full ‘mosaic.'”

No matter which version viewers watch first, Solomon wants to make one thing clear: don’t go back and forth.

“There’s material in the app that’s not in the linear show; there’s material in the linear show that’s not in the app,” he says, doling out a 10 to 15 percent difference in content on either end. “For the app, we wanted to design a story that would be different depending on what perspective you took, even though it’s the same event. It’s not that if you make one choice the character lives and if you make another, they die — the app is not a ‘choose your own adventure.’ People often ask which they should watch first. I personally would suggest that whichever they choose to do, do it to completion rather than jump back and forth since they are structured so differently.”

Whether viewers should watch both versions is up to them, says Solomon, who then jokes: “If you’re having trouble choosing, then I’d say do the broadcast version — since the app version is all about choosing.”

But one version does have a more definitive ending than the other.

Solomon jokes that going back to doing a “regular movie” seems so easy now: “One storyline that’s only 105 pages long? That’s no sweat!” In fact, he and Soderbergh are already working on their next interactive project. Now, he says he is ready for people to explore the final versions of Mosaic, and see Stone embody the character he worked so closely to create onscreen.

“To hand something over to someone is a big moment and she just crushed it,” Solomon says of his star. “The two of us are aware how we had each other’s back when filming. I think we both felt like we were nurturing something together that was very tender, raw and powerful and, for both of us, meaningful.”

Mosaic premieres Jan. 22 at 8 p.m. on HBO; subsequent installments air at 8 p.m. on Jan. 23, 24 and 25, with the final two episodes airing Jan. 26. The app is now available for download on iOS and Android and at watchmosaic.com.