Hollywood, which Murphy co-created with his Glee, Scream Queens and The Politician collaborator Ian Brennan, will release on May 1 as the prolific showrunner’s first original series under a mega-deal with the streaming giant. (Netflix’s Politician was Murphy’s first streaming show, but was produced by 20th Century Fox TV).

When revealing the limited series, the American Crime Story and American Horror Story showrunner had said Hollywood will “look at Hollywood and the sex industry, and how absolutely everything has changed and nothing has changed.” The period drama, a revisionist tale set in post-World War II Hollywood, will be arriving amid a fraught time for the industry, which has collectively hit pause amid the coronavirus pandemic.

Hollywood is exec produced by Murphy, Ian Brennan, Alexis Martin Woodall and Janet Mock and is written by Murphy, Brennan and Mock.

Below, The Hollywood Reporter rounds up all the news about Hollywood.

The period drama received a straight-to-series order at Netflix and Murphy has called the limited series a “love letter to the Golden Age of Tinseltown.” When announcing his casting, leading man Darren Criss described Murphy’s pitch about the series as “a period piece that was young and optimistic” and said it would cover multiple narratives from 1940s Hollywood.

“It’s 1940s Hollywood, so there’s going to be great clothes and great accents. It’s going to be sexy and optimistic. It’s really about young people and the excitement of young people seeking opportunity,” star David Corenswet teased to The Hollywood Reporter.

According to the official synopsis, Hollywood will follow a group of aspiring actors and filmmakers in post-World War II Hollywood as they try to make it in Tinseltown — no matter the cost. Each character offers a unique glimpse behind the gilded curtain of Hollywood’s Golden Age, spotlighting the unfair systems and biases across race, gender and sexuality that continue to this day. Provocative and incisive, Hollywood exposes and examines decades-old power dynamics, and what the entertainment landscape might look like if they had been dismantled.

At the beginning of April, executive producer/writer/director Mock released a statement providing more details on the revisionist drama — which will be arriving as an “aspirational” tale about and Hollywood amid the global pandemic. “With the present so fraught and the future uncertain, we turned to the past for direction, uncovering buried history to spin an aspirational tale of what ifs,” said Mock. “What if a band of outsiders were given a chance to tell their own story? What if the person with greenlight power was a woman? The screenwriter a black man? What if the heroine was a woman of color? The matinee idol openly gay? And what if they were all invited into the room where the decisions are made, entering fully and unapologetically themselves to leave victorious and vaunted, their place in history cemented?” 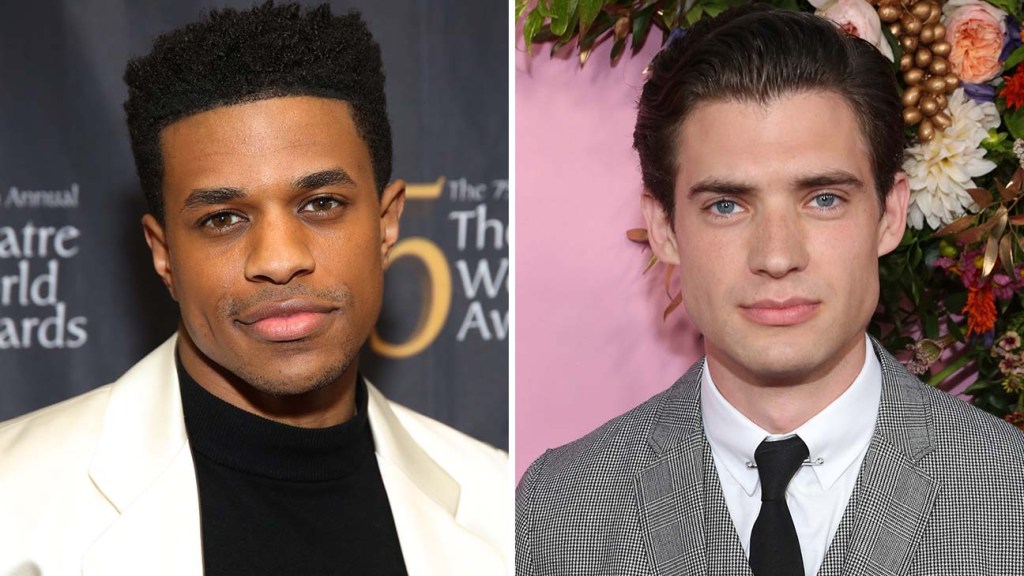 Criss (another Glee alum, as well as the star of The Assassination of Gianni Versace: American Crime Story) will star in and executive produce Hollywood. “I’m heading back to the House of Murphy where I’ll be starring in but also executive producing HOLLYWOOD with Time’s King of Television,” Criss wrote on Instagram when announcing the news. “Late last year, @mrrpmurphy and I had dinner where he shared that he wanted to do a period piece that was young and optimistic. We landed on the idea of a series covering several narratives from 1940s Hollywood. We both left that evening feeling super excited about its potential. Two days later Netflix bought it. Not only is that a testament to the magic of Ryan Murphy, it’s a reminder of the kind of thing that can only happen in Hollywood…literally. Limited Series coming to @netflix May 2020.”

Also starring and executive producing is The Politician‘s Corenswet, who rounds out the leading roles with Tony-nominated Broadway star Jeremy Pope. Of Murphy elevating him to an EP role, Corenswet told THR, “Ryan wants to include us in the creative process. He wants to give us learning experiences. I am really interested in making film and television. As an EP on Hollywood, I’m not making any big decisions but I’m getting to watch a lot of these big decisions be made by all these extremely competent and successful people. So just to be able to watch that is such a great learning experience. It means that, at some point, I’ll actually be helpful to somebody in some way.”

Only the character names and first-look images (below) have been revealed: Criss as Raymond, Corenswet as Jack, Pope as Archie, LuPone as Avis, McDermott as Ernie, Weaving as Claire, Parsons as Henry Wilson, Apatow as Henrietta, Mantello as Dick, Harrier as Camille, Taylor as Ellen Kincaid and Picking as actor Rock Hudson. In addition to Apatow, Michelle Krusiec, Queen Latifah, Mira Sorvino and Rob Reiner are guest stars. The series will feature a mix of fictional and real-life characters.

Hollywood will hit Netflix on Friday, May 1. Though it will be the second Murphy series on the streamer, it is the first original since Murphy moved his overall deal from longtime home 20th Century Fox TV to Netflix in early 2018. Hollywood joins Ben Platt-starrer The Politician and the forthcoming One Flew Over the Cuckoo’s Nest prequel Ratched, starring Paulson, as Murphy’s first group of Netflix offerings (Ratched, which does not have a premiere date, was also produced under Murphy’s 20th Century Fox Television pact). Also in the works for the streamer are musical film versions of The Boys in the Band and The Prom, a 10-episode A Chorus Line miniseries, a limited drama about Halston starring Ewan McGregor and a 10-part docuseries about Andy Warhol. Murphy still produces Pose, American Horror Story, American Crime Story, 911 and 911: Lone Star for the now Disney-owned TV studio.

The first footage introduces those dreamers who are setting out to dismantle the Hollywood playbook. Setting the scene at the Golden Tip Gasoline station, the trailer shows the uphill battle that is laid out for the diverse group of aspiring actors and filmmakers who want to change the Tinseltown script.

Evan Real contributed to this story.