[This story contains major spoilers through the first season of Amazon’s Homecoming, as well as the Gimlet Media podcast on which it is based.]

When it comes to Amazon’s Homecoming, it takes very little time at all for fans of the podcast on which Sam Esmail’s new drama is based to recognize the familiar scent of pineapple and paranoia.

Directed by Esmail and starring Julia Roberts, Homecoming springs forth from the minds of two other powerful storytellers: Eli Horowitz and Micah Bloomberg, who created the Gimlet Media podcast and adapted it for Amazon. While the narrative contains countless twists and turns for viewers new to the subject matter, Homecoming plays out in familiar fashion for those who listened to the podcast first — at least, that’s how it starts, with an opening episode that’s almost a note-for-note adaptation of the podcast’s first installment.

“I think there was this knee-jerk reaction that if you’re going to [adapt the podcast] to television, you have to expand it, you have to take it out of the rooms, you have to make it bigger in scope,” Esmail tells The Hollywood Reporter, explaining his initial reluctance to participate in the adaptation process. “Car crashes and chases … I remember thinking that would do the story they so carefully constructed such a huge disservice.”

In describing the partnership with Esmail, Bloomberg tells THR, “The thing initially with Sam that was really great is, there wasn’t a feeling of, ‘How do we protect the podcast from what is being done to it?’ It was very much that Sam was on the side of the podcast with us. We were having this discussion about how do we take this vibe and this feeling and these scenes and put them into this show? He had that philosophy to begin with, and then it really stayed throughout the entire process. There were even times when I felt like, ‘I know this was great on the podcast but, do we need this here? Is this working here?’ And he pretty reliably was always fighting to keep those moments and those methods in the show.” 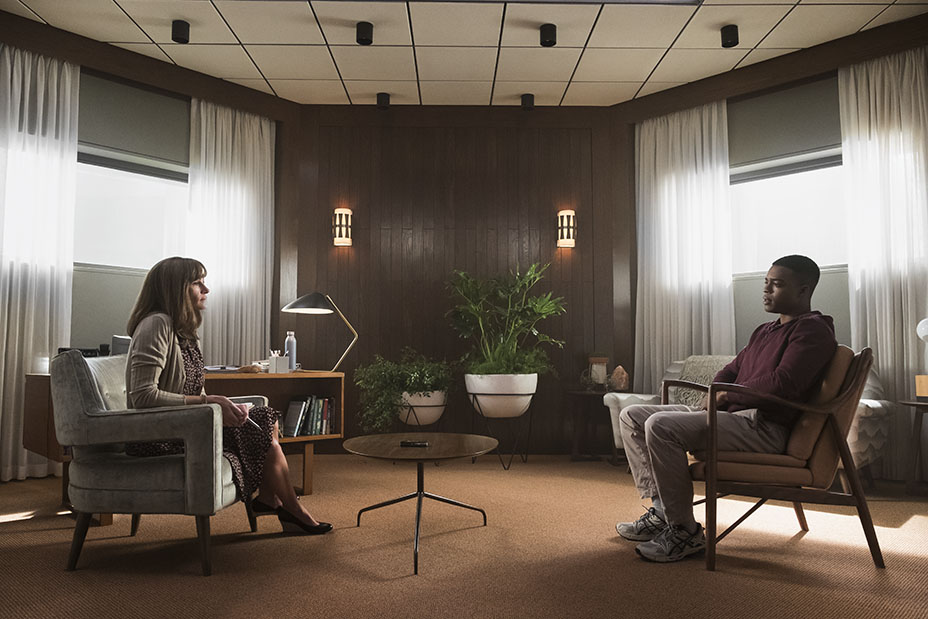 As an example of moments from the podcast that wound up in the Amazon adaptation, there’s the entire conversation between Heidi (Roberts) and Walter (Stephan James) about a false sequel to James Cameron’s Titanic, which Walter and his former fellow soldiers once fabricated to tease a friend and colleague. The jovial moment soon becomes a tragic one, when it is revealed that the architect of the Titanic joke was killed in action before he could realize the prank’s full potential. The story expands later in the season, when Walter no longer recalls the Titanic gag at all, a sign that the Homecoming project’s efforts to erase painful memories is actually working.

“What was unique and special about [the podcast] was that it was so intimate, that you hear this story that you thought was a back story about a character and it turns out to be a plot later on, and then it kind of slips by you before you realize it,” says Esmail. “In that way, it was kind of a throw back to the classic thrillers that I grew up watching: Hitchcock, De Palma. I really wanted to keep that intact all the way down to the half-hour format. That’s the reason why we kept it that way — because that’s how it was in the podcast.”

With that said, anyone who listened to the podcast and completed watching the first season of Homecoming can attest that the series isn’t without some deviations — major deviations, in some cases.

The second season of Horowitz and Bloomberg’s podcast centers on Heidi’s search for a missing Walter Cruz, as she teams up with her shady former colleagues at the Geist Group in an attempt to redeem her past failures. The final stretch of the Amazon show’s season eliminates Heidi’s partnership with Geist completely, fast-forwarding through the search for Walter in one of the finale’s final sequences. What’s more, Heidi and Walter actually reunite by the end of the Amazon drama — a huge change from the source material, as both characters have yet to meet again through the 12 existing episodes of the Homecoming podcast.

“Whenever you return to a work a year later, you’re going to see new possibilities,” says Bloomberg. “You’re going to see problems you overlooked, new opportunities, things to have fun with, so that it’s more than just the second time around. We were able to be so focused and limit the information so much with the podcast, [and once it’s adapted] visually, other questions start to raise themselves: ‘Why now? Where’d that guy come from? Where does he actually work? Who is this character?’ We wanted to take advantage of exploring those things further and filling out the characters and giving the world more of an independent reality, while also staying very disciplined.”