[This story contains spoilers from the season one finale of Amazon’s Homecoming.]

For Heidi Bergman, the Homecoming protagonist played by Julia Roberts, the world is a claustrophobic mystery box…until suddenly, it’s not.

The first season of the Amazon drama, directed entirely by Mr. Robot creator Sam Esmail, unfolds across two different moments in time: 2018 and 2022. A great deal changes between those years. In the earlier time period, Heidi works as a therapist in service of the Homecoming initiative, a project devoted to rehabilitating military veterans suffering from post-traumatic stress disorder. Eventually, Heidi — who has come to care deeply for her patients, specifically Walter Cruz (Stephan James) — learns the full scope of the program: the medicine the soldiers are consuming is designed to target and eliminate their most painful memories in order to get them back into shape to return to war.

Disgusted by her own complicity in the project, Heidi drugs both herself and an unwitting Walter with an abundant amount of the memory-wiping medicine, a dramatic mic drop as she cuts bait on Homecoming. Four years later, it’s 2022, and Heidi is in a very different situation: still based in Florida, albeit working as a waitress, living at home with her mother, and without any solid memories of the time she spent at Homecoming.

In order to convey the disparate points in time, Esmail and cinematographer Tod Campbell crafted two distinct ways to visualize 2018 and 2022. In 2018, where much of the main action takes place, the story is presented in widescreen format; in 2022, the aspect ratio is tightened so much that it’s almost a square — literally placing Heidi and her struggles inside a box, as she’s unable to see the full picture and her place inside of it.

“We always look at filmmaking from the aspect of the character, because we are in their point of view,” Esmail tells The Hollywood Reporter about the creative thinking behind the different aspect ratios. “With Heidi in 2022, the lighting is a little flatter, the colors are a little more desaturated, and that’s because her world is kind of more defeated — whereas in 2018, she’s eager and enthusiastic and hopeful about her new career. In 2022, she’s in this low place, and the other thing is she’s not seeing the full picture. She’s not fully understanding what happened to her, and she doesn’t understand the causes, and that is what really informed the aspect ratio: she doesn’t see the full picture that she does in 2018.” 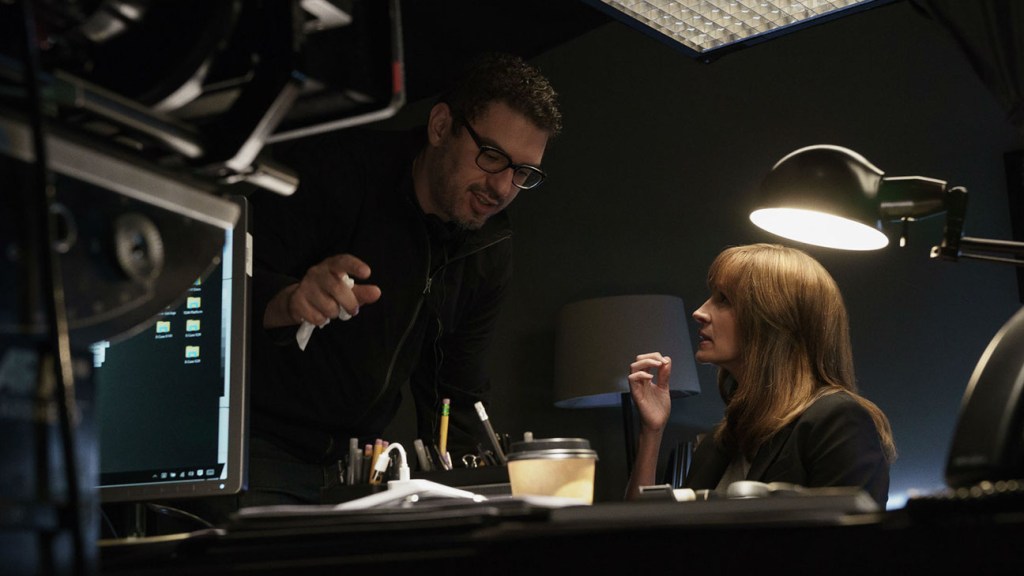 The arrival of Shea Whigham’s Department of Defense employee Thomas Carrasco, who steps into Heidi’s life and starts questioning the amnesiac Homecoming alum about her role in the program, also informed the decision to “box in” Heidi’s 2022 existence — as well as all the other 2022-based characters, who are working to solve the greater puzzle in their own right.

“There’s this feeling, starting out in the first episode, when Carrasco is questioning her, that Heidi in 2022 is continually boxed in,” says Esmail. “She’s cornered between Carrasco, and then when Colin (Bobby Cannavale) enters [the picture], she’s kind of this cornered, frightened animal that’s trying to figure out what happened, what’s going on.”

The tight aspect ratio remains in place through all the 2022 scenes of the first eight episodes — until it morphs into the widescreen presentation of the 2018 storyline once Heidi and Colin return to the Homecoming facility and her memories come rushing back, thanks to certain emotional triggers. It’s a haunting moment, one that fully embodies the Hitchcockian influences coursing through the series’ veins, easily the single most dramatic moment of the entire season.

“[The difference in aspect ratios] really does set up that moment in episode eight,” says Esmail, “because how else do you get inside a character when they are remembering, when all these memories are flooding back…how do you do that? Obviously Julia is going to deliver a brilliant performance, but Tod and I wanted to reflect that in the filmmaking. The aspect ratio obviously helped with that, where we can visually show Heidi’s transformation, her realization of her past.”

Later on in the season, there’s a mirror image to the widening of the 2022 aspect ratio: Heidi, after consuming the Homecoming medicine, returns to her mother’s home, her memories of her time at the facility now fully impaired — resulting in 2018’s widescreen aspect ratio tightening into the square that comes to define her 2022 existence.

“Those moments were the ones that were most exciting to me,” says Homecoming co-creator Eli Horowitz, “when you realize [the aspect ratio] isn’t there just to distinguish the two timelines, but it’s to tell a specific story about memory. When something that becomes a formal device is used then as a plot device? I think that’s the exciting moment.”

“As a writer, to watch an actor dig into something, that’s a really satisfying moment,” adds Micah Bloomberg, who co-created the podcast and the TV series on which it’s based. “Then to watch Tod and Sam just bring their talent and energy to bear on how to explain this outside-the-box idea…they weren’t going to just do it with filters. They weren’t just going to do it with treating the film in a certain way. They wanted to do their own thing, and that to me is just so gratifying, when these partners really attack the script in that way.”

'Homecoming': How the Amazon Drama Honors Its Podcast Source Material