Being a fan is hard. You spend years with a character and then, after only a season’s worth of foreshadowing, he runs a Chevy Suburban through a hail of police gunfire in Midtown Manhattan. He dies, slumped over the wheel, without so much as a perfunctory last breath. You don’t even get to say “goodbye.”

Such was the fate of Peter Quinn, played by Rupert Friend for the past five seasons on Showtime’s Homeland, and a group of viewers care enough about his recent kill-off that they took out an ad in the Aug. 23 issue of The Hollywood Reporter. The full-page declaration, both a rebuttal of Quinn’s manner of exit and an airing of grievances about the drama in general, is framed as an open letter to the show’s creators (namely showrunner Alex Gansa).

“It has been over four months since your sixth season concluded,” reads the letter. “In the midst of a mass exodus of your most loyal and devoted viewers, we have asked repeatedly for you to address your audience and the unceremonious end to a character that you openly acknowledge was beloved by millions. You have been silent. We are asking again.”

For those who do not watch the series: Quinn, a black ops CIA agent humbled by a stroke and drug addiction during his final season, was ultimately done in by his efforts to save central Homeland protagonist Carrie Mathison (Claire Danes) and a president-elect played by Elizabeth Marvel. The depiction of his death was quite decisive. The group behind the letter, which goes by #NotOurHomeland, has raised over $4,000 in support of veterans charity Intrepid Fallen Heroes Fund and asked the producers to donate the same amount. They single out the portrayals of military vets, PTSD and survivors of stroke and sexual abuse as their biggest gripes with the show.

Their complaints did not fall on deaf ears. Gansa gave THR the following statement: “It is painful to hear that that even a small segment of our devoted audience is disappointed in Homeland. Until now, I have refrained from commenting publicly on the death of Peter Quinn, believing that Rupert Friend’s heart-wrenching performance should speak for itself. I have not changed my view. Suffice to say that I mourn the loss of Peter Quinn as much as anybody and that the character was created not to denigrate but to honor the men and women who devote their lives to keeping America safe. In my eyes, he died a hero.”

In Gansa’s defense, many of the issues brought up in the letter have been previously addressed during interviews and panel discussions. For example, Quinn’s death has been confirmed by other producers and Friend. And while Homeland‘s portrayal of Quinn’s PTSD and half-recovery from a stroke did not sit well with fans, it was, as Gansa has pointed out in interviews, part of a deliberate plan to highlight the struggles some vets face after leaving the service. Executive producer and director Leslie Linka Glatter is also accused of “fielding all media response,” though that might have something to do with the fact that she’s nominated for an Emmy and, thusly, doing press. (Other objections, such as the throwaway line that implied F. Murray Abraham’s character had a sexual encounter with an underage Quinn, have not gotten much attention.)

Despite their successful efforts to raise enough money to buy an ad, the group doesn’t seem to be that large. @NotOurHomeland has a mere 54 followers on Twitter. There’s also a Tumblr page that includes open letters to Gansa, but it’s mostly just gifs. Fans involved with both accounts appear to be a mix of defectors and returning viewers, though they all seem uniform in wanting Friend to return to the series.

On the bright side, the letter is signed “respectfully.” 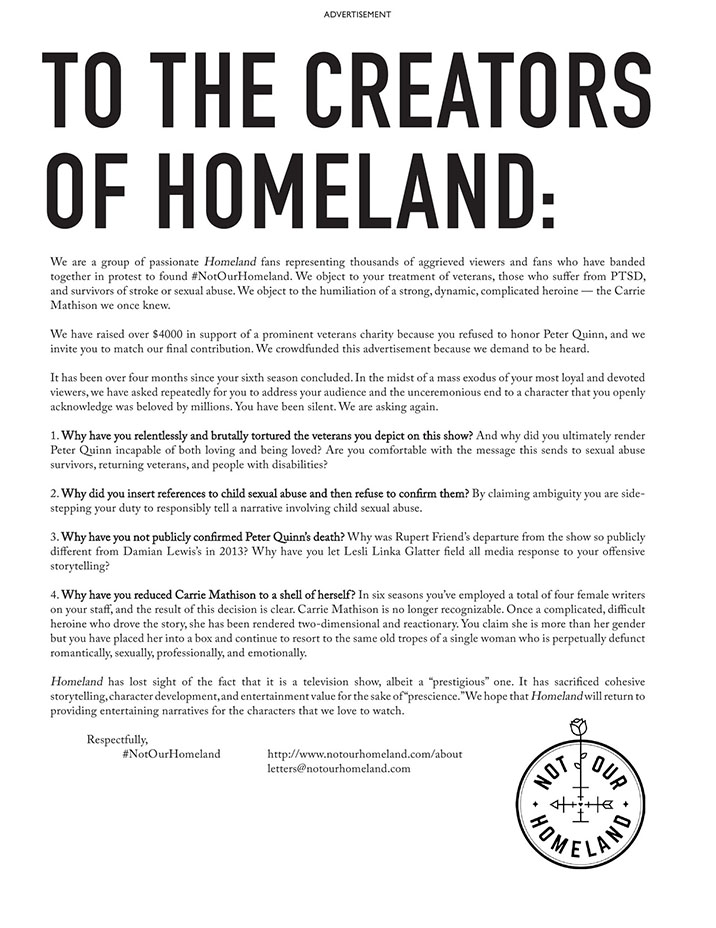