“Poetic,” “satisfying” and “full circle” is how the team behind Homeland is describing the final season — and ultimate series finale — of the Showtime spy drama that launched 10 years ago.

The series that once centered on a family being torn apart by the return of their prisoner-of-war patriarch, Marine Sergeant Nick Brody (Damian Lewis), has since morphed into a prescient geopolitical action show over the course of seven seasons. Through it all, however, Homeland has been a compelling character drama starring Claire Danes’ CIA superhero Carrie Mathison. Now, for its eighth and final season, series creators Alex Gansa and Howard Gordon have found a way to end the series by bringing it back to the beginning, and by fusing Carrie with Brody once again.

“The last scene of season seven, when Carrie comes across that bridge and runs past Saul [Mandy Patinkin] and doesn’t even recognize him after her captivity in Russia, we knew right then as we were watching that scene what we would do with season eight — we’d put Carrie in Brody’s shoes,” Gansa told The Hollywood Reporter at the New York premiere for the final season, which launches Feb. 9. “She’s now the one who is suspected — not only by the government, but a little bit by she herself. So it’s an interesting reversal, putting her in Brody’s shoes. It’s a poetic ending.”

Season seven — which aired two years ago — ended with Carrie’s release after having been a prisoner in Russia for seven months. When the new season opens, Carrie is working on her rehabilitation. But the fearless agent, who had the medication for her bipolar disorder stripped from her during her time in captivity, has lost chunks of her memory. She doesn’t know what intel she has given up and, similar to the concerns of loyalty surrounding Brody during his return in season one, the question looms: Can she be trusted to serve her country once again?

“Seven months of Russian interrogation is not easy for anyone, so it mirrors back to Brody. Was Brody turned? Did Carrie talk? What did she give up?” teases executive producer Lesli Linka Glatter. [Brody, after a complicated romance with Carrie, was killed in season three.] “She’s questioning the big gaps in her memory and I think her deepest fear is that she can’t remember and she doesn’t know.”

For Danes, opening up the wound in Carrie’s psyche that was left by Brody posed one final challenge that she says takes the character to “surprising” places, including another dangerous romance.

“Carrie’s been traumatized so many times over,” Danes sums up to THR. “But I think in Russian custody, her PTSD was taken to a new level and now, the ultimate predator and the ultimate enemy is stalking her and she has to take the bait — because she needs to know what happened to her during that time and he’s the only person who can provide those answers. I think that’s pretty good dramatic material right there.”

She continues, “It does recreate the dynamic that she had with Brody. She is kind of aligned with Brody here and she’s another iteration of Brody, but she’s in another romance that is sort of feigned, but then becomes genuine, and she’s dancing with the adversary in a very dangerous way.”

Though Danes laughs at the collective worry that will be coursing through viewers’ minds as they see Carrie in such a vulnerable situation, Gansa is more confident in his protagonist: “This season, she is better equipped to handle that self-doubt than she ever has been.” 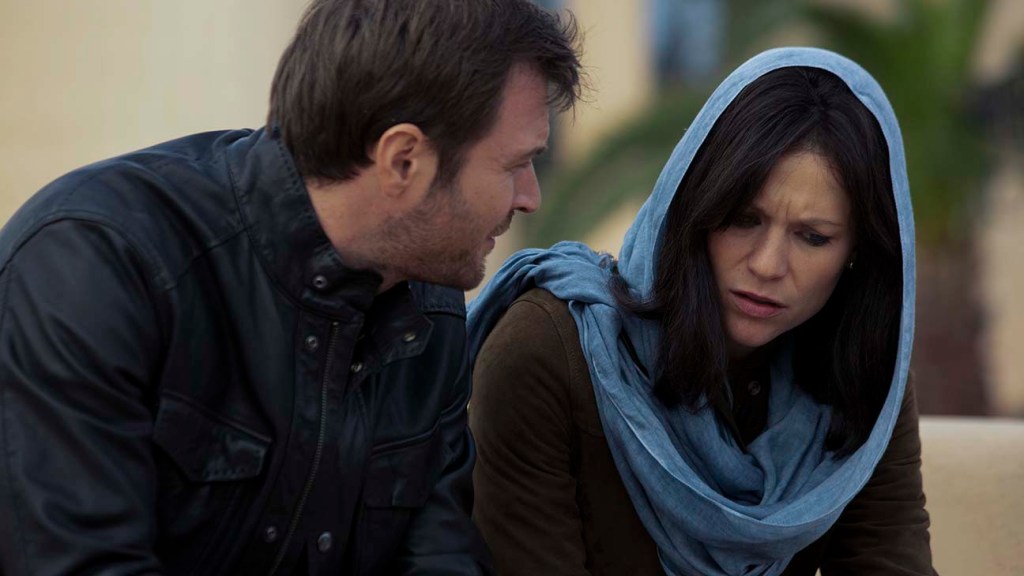 Airing during an election year, Homeland will once again have political parallels to the real world. “It’s hard not to reflect what’s happening in our world right now,” says Gansa. “It’s definitely a different time with a different chief executive at the head of our [Homeland] government; things will be turned upside down.” Season eight will see Beau Bridges in the Oval office as “inexperienced” President Warner, says Gansa, along with newcomer Sam Trammell as his vice president, Benjamin Hayes. “I’m right of center, very ambitious,” says Trammell. “He’s hired to help heal the partisan divide that was existing after the seventh season.”

When plotting the final season, Gordon says many of the counterterrorism questions that drove the pilot, which launched a decade after 9/11, resurfaced to influence how he and Gansa wanted to end the series: “We reconstructed the ideas that Alex and I asked, like: what do we have to be afraid of? What’s the price we’re paying as Americans for this war on terror? Those questions have only gotten more complicated.”

Gansa adds, “Did we really make things better? Did we make the world safer? And how did we compromise our values in the process? Those are all of the big questions we’ve raised with Homeland from the beginning. I’m not sure that we’ve answered them or that they’re even answerable, but they’re out there for interpretation.”

But, at the end of the day, as much as Homeland has always been about those big ideas, the heart of the show remains with the characters. “Though Brody was in some ways the delivery system of Carrie’s fate, we always knew that this was a story about Carrie and Saul and that relationship was always the axis of the series,” says Gordon. “We always knew that it would come around to that relationship, and that’s really what it does.”

When introducing the premiere of the final season to an intimate crowd at Manhattan’s Museum of Modern Art, Gansa shared that — after being “chronically” behind schedule and over on budget — he and Danes, also an executive producer, hadn’t agreed on how the season would actually end until the day before they began shooting those scenes. “It seemed like our ambitions for the final season would defeat us,” he told the crowd. Adding, “Just as we were out of time, an idea came. The idea.”

For Patinkin, what was written on the final pages gave him the ending he wanted. “What Alex did, at least on paper, was the answer to my campaign and my wishes and my dreams and our conversations for the better part of almost nine years,” the actor tells THR. “And I’m sure it will come to fruition in a very on-the-edge-of-your-seat, non-sentimental, non-saccharine way, but a way that I care about.”

Viewers who feel precious about the Carrie and Saul relationship will be satisfied, the team agrees, with a series finale that Glatter also calls “very intense on every level” and Trammell describes as “nerve-wracking.” Gansa adds: “We’ve remained true to our characters. Hopefully we’ve told a thrilling story. And we hopefully leave the series with some sense of closure.”

The series’ Emmy-winning composer, Sean Callery, who says he has watched the final episode “100 times,” even calls the ending the best series finale he’s ever worked on. “You want a series finale to have a sense of satisfaction, you don’t want it to be too sentimental and you most certainly don’t want it to be too special and out of format, like the end of Seinfeld was,” he tells THR. “This is not that. It’s an absolutely flawless episode of Homeland. It does close the loop on some things and it opens a couple more loops, but not in a way that leaves you looking at a blank screen like in The Sopranos.”

And while Danes expects a passionate reaction, she also believes the writers accomplished the feat. “It’s kind of an impossible undertaking and I think it’s inevitable that people are going to be frustrated and probably infuriated,” she admits, “But look, it’s sad that it’s ending. There’s always going to be that resentment there, too. Everyone is going to, even unconsciously, have formed their own theories about what they want it to be. But I think we try to honor our characters and the nature of the show the best we could and hopefully, by extension, the audience.”

The final season of Homeland airs Sundays at 9 p.m. on Showtime. Read THR‘s oral history on the show here.