“I felt like it was a bit of moot point,” says the House of Cards character’s costume designer, Kemal Harris. “No one is more patriotic than Claire.”

Played by Robin Wright, Claire becomes president on season six of the Netflix drama, which is online today, after Kevin Spacey’s departure from the show amid sexual harassment allegations. For the topical show, Harris was tasked with envisioning the wardrobe of a female commander in chief without a real-life role model.

Blazers with USA pins did not make the cut (“They didn’t feel like a buttoned-up Claire”), but Harris did nod to tradition with presidential seal cuff links from the White House — “Something that she could borrow from the boys without it being the power suit.”

Harris, who has designed Claire since season three, says female politicians face a double standard when it comes to their outfits. “Men aren’t scrutinized that way,” she says. “It’s obviously more pressure.” For Claire’s presidential look, Harris sought inspiration from the military, with high-neck silhouettes and plenty of straight-edged tailoring  — “Dare I say sort of a dictator vibe?” 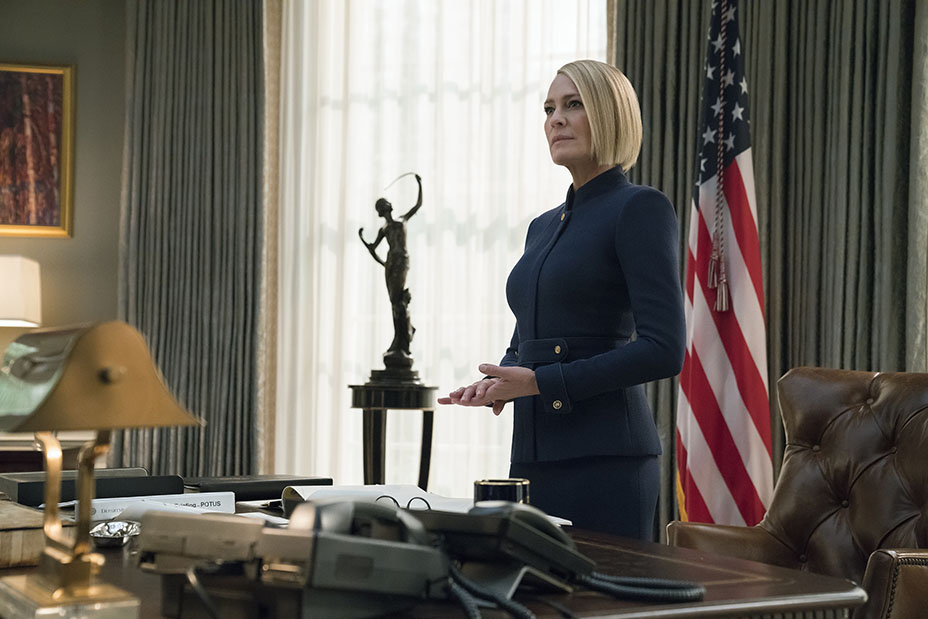 Harris discusses the final season of the Baltimore-shot drama, for which she custom-made most of Claire’s 40 wardrobe changes and took on designing the look of Annette Shepherd (Diane Lane), Claire’s former classmate with whom she has a contentious relationship.

What were your visions for how a female president would dress?

I looked into other female leaders around the world. I looked at past presidencies of the United States. At the beginning of the season, we’re given sort of a character arc where I know generally what’s going to happen to Claire, but we wouldn’t get the scripts until sometimes as late as five days before shooting, and often with changes, it’s the day before. So I had to imagine what I could see her wearing for an entire season, even without knowing exact scenarios that she’d be in. … [DC is] not really a workplace where big fashion statements are made. So I had to think, “What would be Claire’s version of that?” A little more utilitarian.

I was looking to the runways and designers, but trendwise, it was really not Claire and not really presidential. I’m talking about dad sneakers and Louis Vuitton! It’s not quite right for a female president. So I reached out directly to our go-to designers Michael Kors, Ralph Lauren, Max Mara and Dolce & Gabbana. [There’s also] custom pieces that I’d sketch and have made in New York. I ended up custom-making about 80 percent of Claire’s wardrobe for season six. We had a mannequin that was built to Robin’s exact body measurements, so me and my tailor could drape fabric and hold fittings on that mannequin at 1 a.m. in Brooklyn, and then take it to set the next day. I also shopped a bit at high-end retailers, like Bergdorf Goodman and Barneys. Even then, each piece that I’d get retail, I would alter, change the sleeve or pencil the skirt more. 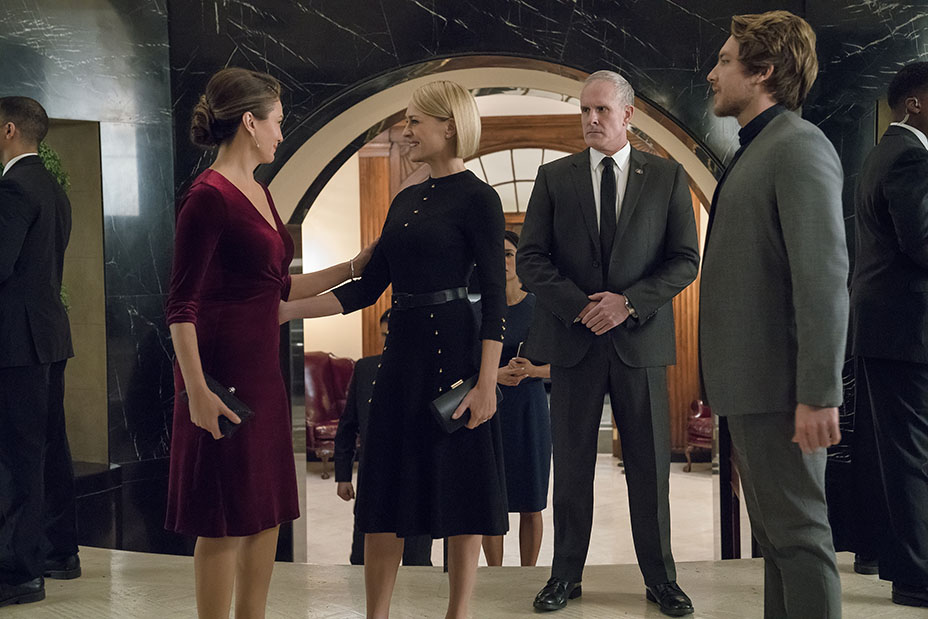 In the past, I would never repeat an outfit, because Claire is kind of fabulous that way. She has the budget and the wherewithal. I didn’t feel like we needed to see her in the same jacket over and over. But as president, she starts rewearing some outfits so she doesn’t come across as this over-the-top president who is changing outfits for every scenario. That was something new.

What does she wear?

Presidential blues, some military greens, black, of course. … I wanted to continue with [a military] theme, especially since Claire is really fighting for her role, her position, everything. She’s at battle with her peers, all these people who are coming out of the woodwork saying, “We had this deal with Francis, you have to honor this deal.” She’s fighting to prove the fact that even though she’s female, she’s worthy of the position.

So I felt wardrobe-wise everything should be a little tough, a little militaristic. Everything has a high neck, long sleeves. Some of the images I kept coming back to were actually women in military in WWII and the early ’50s, specifically women in the Navy. I really love their jackets that were belted with brass belts.

Which real-life politicians did you draw inspiration from?

I didn’t get any direct inspiration, but it definitely was part of my research to see what people are wearing on a daily basis in the White House or at Cabinet meetings. … Something that struck me is you never see a past or current president with a briefcase or a laptop bag. They’re never pulling their own roller bag. I don’t even know if they carry a wallet. I made a conscious decision not to give Claire a handbag because, pardon my French, she’s the fucking president of the United States, and she has work to do and she has people for that and they can carry her bags. She doesn’t need keys anymore.

Do you think Claire’s style would have been different if Hillary Clinton was president and you had a more direct inspiration to look at?

Maybe. It’s possible. But Claire is such a unique person. She really is like no one that I know currently in politics. She’s always been very manipulative with her image and her wardrobe. Everything is tailored within an inch of its life. There’s no question about the female form when she walks in the room. She uses that to her advantage. It offsets the men in the room, that’s for sure. So would I have emulated Hillary more? Probably not, only because Claire uses her wardrobe as a weapon just as much as her sharp brain and political tactics. 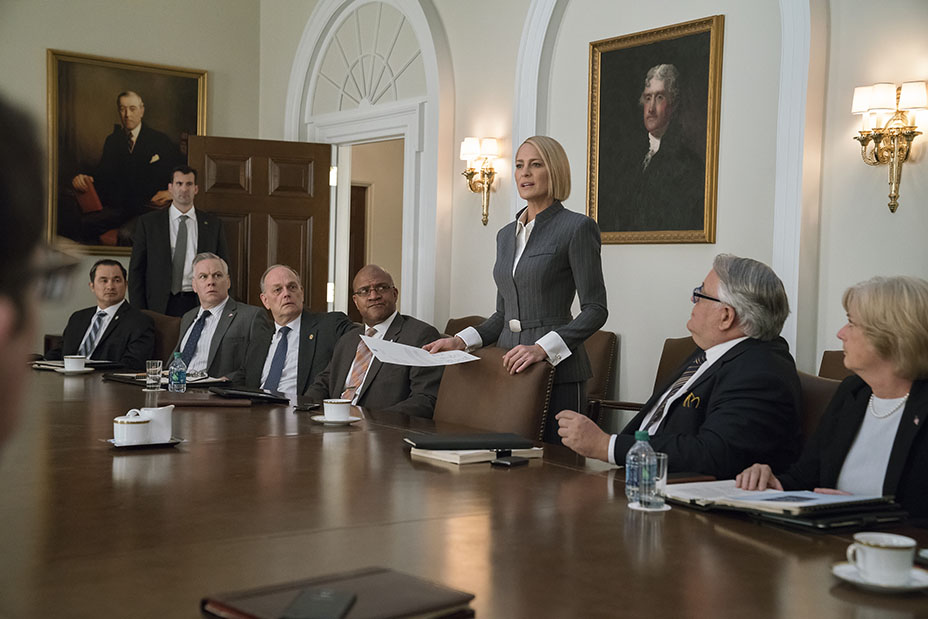 What are some of your favorite looks from the season?

My favorite that’s grown on me is the gray pinstripe suit, this belted jacket with a white shirt underneath it and matching trousers. And that’s when she’s introducing her all-female Cabinet, and they’re also in shades of gray. It felt like a bit of a palette cleanser. It felt like Claire’s new fresh leadership is entering the room and taking over.

I also costume designed Diane Lane’s character as well, so this is the first season that I took on two people. But her character, Annette, is so fabulous and over the top — Gucci handbags and three diamond rings on one finger. I had so much fun designing her wardrobe, because it was the complete opposite of how constrained and buttoned-up Claire is. They’re very much opposites.

How did that come about that you took on another character?

We knew that the two of them would have a very strong antagonistical relationship and be sharing the camera a lot together. So the showrunners approached me and said, “What do you think about this? It could be interesting to have your eye on both these ladies to have them battle each other and balance out each other.” And I’m a huge fan of Diane’s as well, and I was like, “What a dream team. Diane Lane and Robin Wright on the same screen.” I couldn’t refuse.

How do the two styles juxtapose?

There’s a moment when Annette is in the Oval Office, meeting with Claire, in a black Karen Millen dress and Michael Kors shoes that I put her in that felt like her version of what she thinks Claire would approve of. But then when she’s not in the White House doing any lobbying, she’s much more fabulous. There’s usually more color and pattern in Annette’s character, who is very much into the Max Mara cashmere coats, a little more texture, a Ralph Lauren silk stripe blouse and belted at the waist over trousers. She definitely had an ease to her — less tailored and buttoned up. 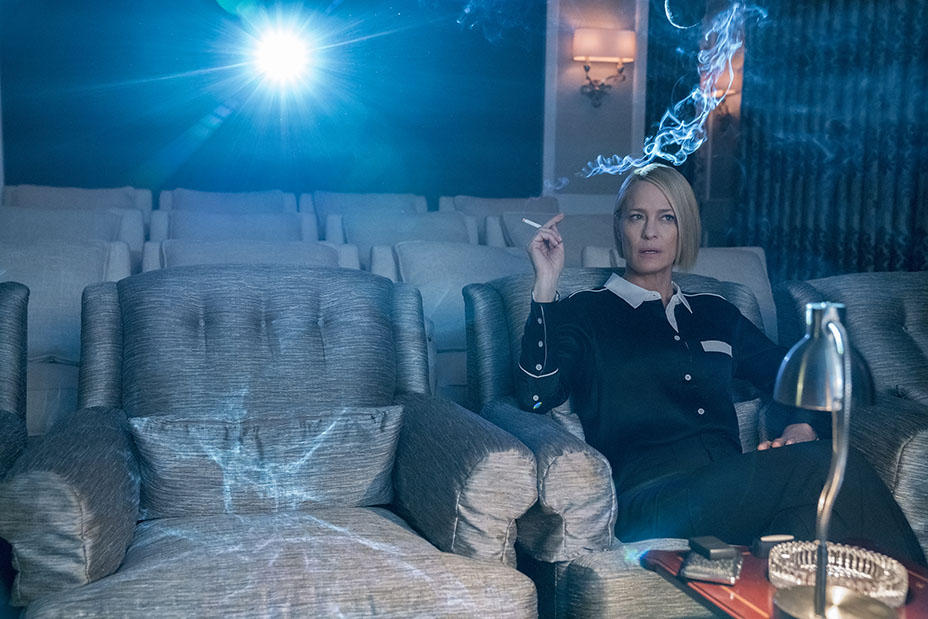 Absolutely, because during the past elections, every time someone would call to get my opinion on Hillary’s wardrobe, no one would ever ask about any of the male counterparts and that always pissed me off. … As I said, “Don’t ask me about Hillary’s pantsuits. Ask me about her policies because that’s what we’re voting on. We’re not voting on which color she’s wearing today.” It’s a double standard. Men aren’t scrutinized that way.

What are the effects of that?

It’s obviously more pressure, similar to actresses who have to be dressed up on the red carpet at the Oscars. All the male actors just got it easy, just roll up in a nice tuxedo. And the women have to have the biggest, the flounciest, the most bejeweled and befeathered gowns. Obviously, women can wear a tuxedo if they want to, but it’s this peacock effect that they’re just expected to diet down to the size to fit, to wear the highest heels, wear the most jewelry, wear the biggest gown. It’s wild.

Was that in your mind when creating the wardrobe of a female president?

The thing with Claire is she’s always used wardrobe as part of her brand and part of her image. So we never see Claire in jogging pants and flip flops. Claire is the epitome of “dress for the job you want.” She’s always prepared, always dressed to the nines for the positions that she’s wanted and gained. So this is all part of her big plan. Now I don’t know if that’s the same for other female politicians. I’m sure that’s not the first thing on the top of their lists. So for Claire, part of her overall strategy is dressing the part. 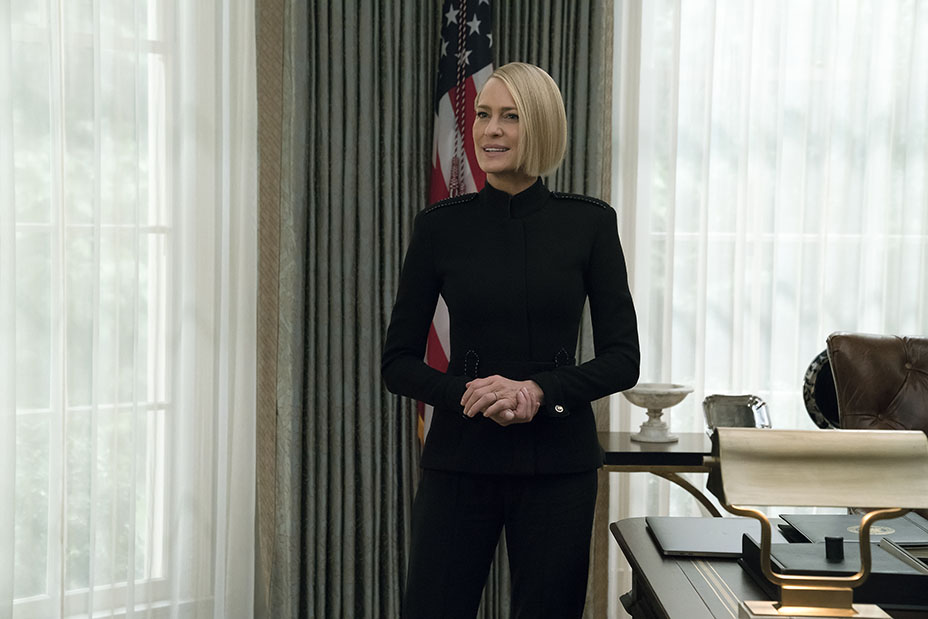 Is there anything else that stands out about her presidential costumes?

The one little nod to past presidencies that I incorporated into her wardrobe was the White House cuff links on her French cuffs. You can get cuff links from the White House gift shop. … We contacted them about the possibility of cufflinks and they said, “Oh, we have a prototype style here that we didn’t really sell. Maybe those would be good for Claire.” So we’re using a style of cuff links that are a little bit smaller than the usual ones they sell. I added French cuffs to a lot of the jackets and some of the dresses, so she can rock her little emblem French-cuff cuff links almost every day.

Why was that important for you to include?

Past presidents have worn them and the only token, signature piece that a lot of presidents wear is a small USA flag on their lapel. I wasn’t going to be dealing with many lapels because I knew I wasn’t going to put her in the classic blazer, so I wasn’t sure the pin would work. And also, really no one is more patriotic than Claire. Claire is fighting for her country — for the people, maybe not, but definitely for the White House. I felt like it was a bit of moot point. We know her positions and we feel like she doesn’t need to have that. But the cuff links were really cool and a little nod to past presidents, something that she could borrow from the boys without it being the power suit.