[Warning: This story contains spoilers from the entire fifth season of House of Cards.]

Imagine winning the U.S. presidential election — and then not.

For Will Conway, Joel Kinnaman’s House of Cards character, that scenario became a devastating reality.

Frank Underwood’s (Kevin Spacey) young, dapper and daring opponent stepped onto the scene in season four, and in season five he is shown the door.

After battling against Underwood in the election, he ultimately wins and even gets a concession call from the white-haired anti-hero. But that all changes as Frank, along with Claire (Robin Wright), Leann (Neve Campbell), Doug (Michael Kelly) and Aidan (Damian Young) rig the system in their favor.

Although Conway makes it out of the season alive, he is no doubt one of the Underwoods‘ latest casualties, and after the loss his story comes to an end mid-season.

“[For] Will’s arc in this round, we go much deeper with him. You get to go to his dark place,” Kinnaman tells The Hollywood Reporter. “It’ actually more fun to play a character that’s unraveling and we get to peel the layers off and see what’s under the facade.”

The actor opened up further to THR about being a victim of the Underwoods‘ manipulation, the real-life parallels the show shares with today’s political climate and what’s going on with the Suicide Squad sequel.

This season Will’s arc is a bit more emotional and rather devastating. What mindset did you get into for the role this time around?

I really settled into the role during the fifth season. It’s always a good experience to come back to a role. When I jumped on House of Cards on season four, I was supposed to have five weeks in between Suicide Squad and House of Cards, but since we went over schedule on Suicide Squad, I ended up having five days in between. I really had to just jump in so when I came back I felt like I settled in. It’s the same thing you get at the end of a film; often you really know the character. That’s what’s nice with doing TV: you get the chance to revisit and to let it marinate. [For] Will’s arc in this round, we go much deeper with him. You get to go to his dark place. In season four, it’s more of portraying this worthy opponent [to Frank] in a way. In here, it’s actually more fun to play a character that’s unraveling and we get to peel the layers off and see what’s under the facade.

It’s also interesting with this kind of character that is so polished and that is so much playing a role in his own life and when his narrative isn’t playing out the way he wants, then everything starts to crumble.

Going into season five, how early on did you know how his story would end?

[Showrunners] Melissa [James Gibson] and Frank [Pugliese] told me straight-up way before we started shooting how they envisioned the arc of the character. I thought it was a great idea. It was fun for me and Dominique [McElligott]. They [are] this perfect couple and have this perfect facade where you feel that the image that they are showing to the world. People that are too keen on showing how perfect they are they usually aren’t that perfect and it was really fun for us together to get to play that unraveling. You get to see that actually [Hannah] might have been the more genuine and sincere person and when the game had to be played on such a deep level to be won, she was the one that pulled the plug and [said], “I can’t live like this.” And then they broke. 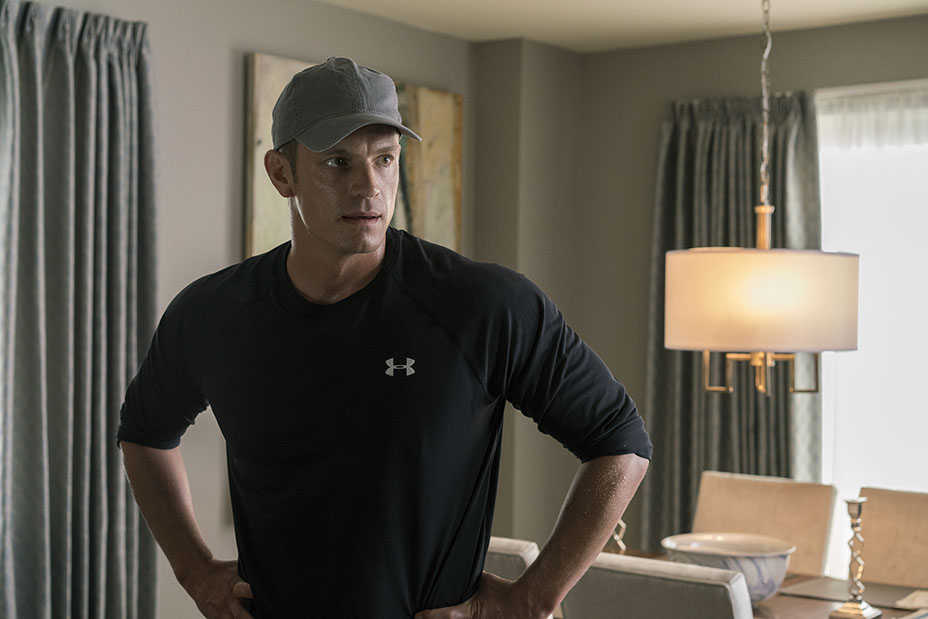 Frank and Melissa spoke about this season showing the blur between entertainment and politics. How did your character, with his use of social media, the live webcasts, etc., help further that? And why is his story a cautionary one?

Considering where we are now where we have a president that is so flippant with his social media and uses any whim that he gets and he will communicate that to the world and conduct the nuclear level diplomacy with his Twitter account, we see the dangers of that. (Laughs.) Someone needs to tell that schmuck to stop using his Twitter account to conduct diplomacy with North Korea. He’s going to start a nuclear war because he’s in a bad mood.

We were shooting [during] the conventions. There was awhile there when the “Never Trump” movement was gaining steam and there were Republican factions that were talking about stopping the delegates from voting for Trump. I thought it was going to be another case of House of Cards predicting the future. There were times where I was wondering if maybe we need to go even crazier here because reality is so insane. And everyone who was watching the election was asking themselves, “Is this real life? Is this really happening?” And that feeling hasn’t subsided. It’s still very present. (Laughs.)

Will wins the election, but then by the hands of the Underwoods he doesn’t. How realistic is this storyline?

(Laughs.) Well, in some ways that’s what happened! I’m a big opponent to the electoral college, I think that’s an obsolete idea and it’s undemocratic. It should definitely be one person, one vote. In that case, the person who won the vote in the U.S. election lost if you think about the popular vote. Democracy is frail and there are a lot of forces trying to take advantage and skew it to the point where it’s undemocratic. And there are ways to sabotage it. We saw that in the 2016 election in real life and we see it in House of Cards.

Could Will have been a good president or would he have unraveled from the pressure?

He definitely would have been a good president. There have been several narcissists that also turned out to be good presidents. Will had a lot of good intentions accompanied with his selfish hunger for power.

Another real-life parallel was how Will is taken down by audio recordings, which nearly derailed Trump’s campaign when the Access Hollywood tape came out. How did you react when so many of the plot lines you filmed in your election began to happen after the real one and what was the most jarring to you?

It’s been eerie in House of Cards. In the last season and this season it feels like people aren’t going to believe that we were first. (Laughs.) There’s been so many instances where House of Cards has been predicting, then the future plays out before we get time to air it, but we actually shot it before those real life events happened.

Frank was described as having no ideology and that being the scariest thing of all. Is that what made him such an impossible competitor to Will?

When someone is completely scruple-free and has no more foundation other than their own personal gain, it’s very hard to compete with somebody like that because that person doesn’t have anything to lose. All they live for is their personal success. That’s what we’re facing with our current president. 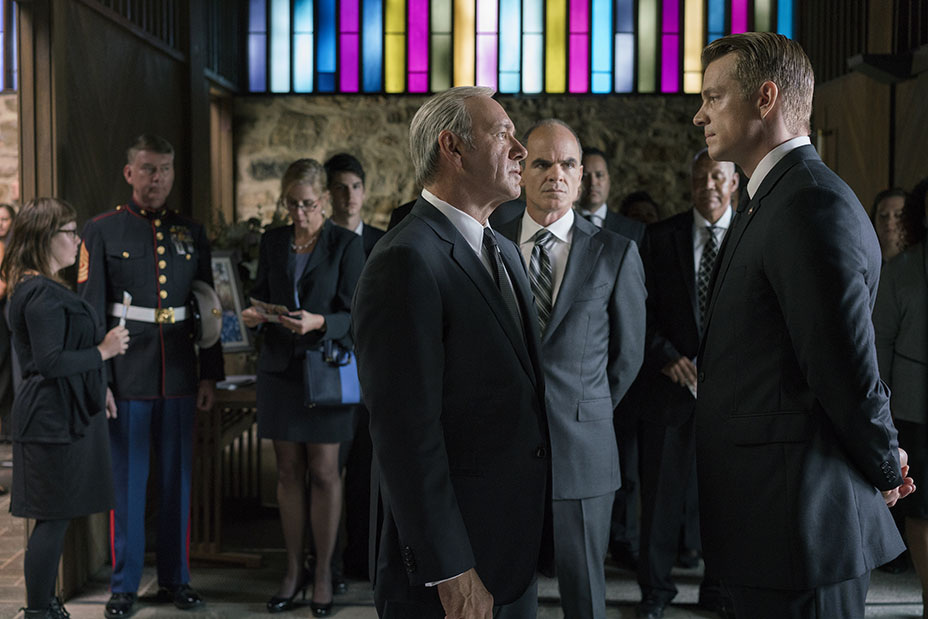 Is that what makes Frank and Trump similar?

Their moral compass is similar. Even though Trump’s is much less sophisticated.

You are close with former showrunner Beau Willimon. How similar and how different was shooting this season with new showrunners Frank and Melissa?

I had a singularly great relationship with Beau. I thought the dialogue he wrote was sensational, but I have to say I’m so impressed with what Frank and Melissa were able to achieve. Melissa and Frank did a fantastic job. They’ve been part of the writers’ room for the whole journey and some of the plotlines were already established. I was really impressed with the level that Frank and Melissa were able to uphold.

Will doesn’t end up dead like many of the other Underwood casualties, however the impact of him losing the election seems just as bad. What’s it like being another victim of Frank and Claire?

Will didn’t fall for the old push-me-in-front-of-a-train trick. But he did get destroyed nonetheless. I’m proud to be part of that club.

With Will still being alive, how do you think it’s possible for him to come back to the scene?

On the one hand, Will could just be a broken guy. It ruins his marriage and he’s out of the scene, but he’s still a young guy so maybe this is what he needs to come back strong and more vicious.

Were you able to watch the episodes you’re not in and do you know how the season ends?

I actually don’t. Since my part was in the first half of the season and then I jumped into my next project, Altered Carbon, I kind of left everything House of Cards behind. I haven’t read any scripts. I’m going to follow the second half as a fan.

When 'House of Cards' Decided to Start Trolling Trump

I’m in the home stretch of Netflix’s biggest show so far, Altered Carbon. It’s a sci-fi noir set 250 years in the future where the human life, our souls and our memories, our whole existence has been able to become transferred into… chips that [are] placed into the back of our necks. The result of that is the human body is interchangeable, which means that the rich people who are able to grow clones are in fact immortal. I play a form of a detective in this world where we go on a journey where I’m investigating one of these immortals called “mets.”

What’s the status of the Suicide Squad sequel and will you be back for it?

As far as I know they’re writing the script and I think the plan is to shoot it sometime in 2018, but that could change. I think I’ll definitely come back for it.

There’s no director attached to it yet. Who do you want to direct it?

Ultimately, I’d love for David Ayer to direct it, but if he doesn’t want to direct it then someone who is great with character and that’s able to ground the story and maybe put these characters in a more normal situation. It would be really interesting to see these crazy characters interact with regular people as well.

Do you want to see Will Conway step back onto the House of Cards scene? Chat about it in the comments section below and stay tuned to Live Feed for full House of Cards coverage.