Kevin Spacey’s House of Cards character is officially dead and buried — and now there is a gravesite to prove it.

Netflix erected a headstone bearing the Francis J. Underwood name at a cemetery in Gaffney, South Carolina, the hometown of the fictional character of the political saga. The stunt was timed to the release of the sixth and final season, which bowed its eight episodes on Nov. 2.

And the gravesite — which includes headstones for both Frank and his father, Calvin T. Underwood — will be open permanently.

Frank’s grave sits on the perimeter of Oakland Cemetery, where The Hollywood Reporter was told it can be most easily accessed by Union Street. The cemetery first let fans know they could visit the grave the day the season dropped and encouraged people to come pay their respects to the character on Nov. 3 to get their picture taken by Netflix. They also shared an email address where viewers could submit their own photos at a later date. Since first putting out the call, an employee at Oakland Cemetery tells THR that while foot traffic at the grounds has increased, they have only received a few photo submissions.

Oakland Cemetery was selected as the final resting place for Frank by Netflix ahead of the final season, according to the town’s newspaper The Gaffney Ledger. The paper also ran an obituary for the show’s 46th president that read, in part: “He will be remembered as a lifelong patriot who would stop at nothing to serve his country.”

It is no spoiler to say that Frank is dead. Frank’s gravesite appeared in a season-setting clip that officially announced the Washington, D.C.-set thriller had killed its main character. After Spacey was fired from the series over sexual assault allegations at the height of the #MeToo movement last fall, the final season had to be reworked and speculation turned to how the show would handle the fate of the star character.

The scene (in the video player, above) was released two months before the final season bowed and confirmed that Frank had indeed died in the year 2017. How he died, however, remains a mystery that isn’t unraveled until the end of the final season.

House of Cards showrunners Frank Pugliese and Melissa James Gibson explained to THR why the gravesite clip was not included in the final episodes that are currently streaming. “That all happens, in a way, before our season starts,” Pugliese said of killing the character off-screen. “It also plays off an earlier season. There are some callbacks in this [final] season and this is one about Francis’ relationship to his father and that graveyard.”

In the scene, Robin Wright’s Claire Underwood visits her husband’s resting place to tell the ex-Underwood president that, “When they bury me, it won’t be in my backyard. And when they pay their respects, they’ll have to wait in line.” When the camera pans out, it’s revealed that she disgracefully buried Frank next to the father he loathed in the Gaffney family plot, instead of in Arlington National Cemetery.

“Season three started with Frank at his father’s grave and peeing on it,” James Gibson added to THR. “But the Gaffney burial is also a huge clue to Doug Stamper [played by Michael Kelly], because he knows that Claire is not honoring Francis’ wishes in the least. Francis is rolling over in his grave at the thought of being next to his father, for whom he felt no respect.”

The final season of House of Cards tracks the ascension of Claire (Wright), who is both the first female president and a grieving widow when the season opens. Though her dead husband — much like Spacey himself — casts a shadow over the final season, his image is never shown and his voice is never heard.

“We made a decision that the most powerful place Francis Underwood could live at this point is in the imagination of the viewer,” Pugliese explained to THR.

Now, after a final season that couldn’t escape him, it seems Frank Underwood is buried once and for all. 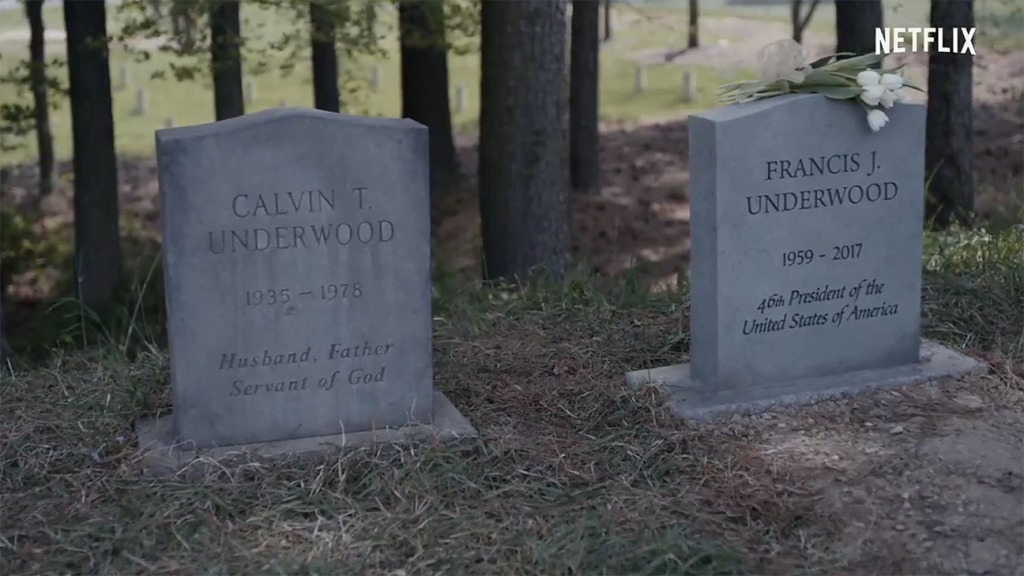 Nov. 10, 1 p.m. Updated to reflect that the tombstones will be up permanently, and not for a limited time.