[Warning: This story contains spoilers from the season-five finale of Netflix’s House of Cards.]

Last season, LeAnn Harvey was ambitious. After season five, she’s one of them.

Neve Campbell joined House of Cards last season as the campaign manager for Claire Underwood (Robin Wright). Though she was happy to get into bed with the Underwoods to make her rise in Washington, LeAnn’s compass still seemed to point to good over bad, a rare quality in the world of this drama series.

The fifth season of Netflix’s political thriller (now streaming all 13 episodes) brought on new showrunners Frank Pugliese and Melissa James Gibson after the departure of creator Beau Willimon. The result was a season that appeared to be ripped from the headlines with eerie parallels to the current political climate — even though it was written well ahead of Donald Trump’s election as president. But some of the biggest question marks left after the finale surround the fate of LeAnn (Campbell) and Doug Stamper (Michael Kelly).

After struggling to find her place in the Underwoods‘ Oval Office, LeAnn finally got what she wanted when she traded leaked government information from hacker Aidan MacAllan (Damian Young) — who was also revealed to be the lover she stole away from her mother — to become newly minted President Claire Underwood’s chief-of-staff. But Jane (Patricia Clarkson), revealing herself to be a peddler of Frank Underwood’s (Kevin Spacey) agenda, pulled a bait-and-switch, booting LeAnn out of her cushy office before she even had a chance to decorate. While driving away from the White House to meet Doug, Frank has someone run LeAnn off the road in a life-threatening accident that closes her season-five chapter with her fate up in the air.

Meanwhile, soldier Doug has taken the fall for Frank over Rachel’s (Rachel Brosnahan) death and is under house arrest when his phone conversation with LeAnn cuts out at the time of the accident. Though the two characters loathed each other at the start, this season brought them together romantically, with LeAnn seducing Doug and even spending the night. With Frank now out of the Oval Office after resigning as president — and being shut out by the new woman in power, Claire, in the finale — Doug is left sidelined and on the outs with his professional future looking bleak and for the first time, also unknown.

With Netflix yet to hand down a season-six renewal, The Hollywood Reporter spoke to Kelly and Campbell together about the questionable fates for each of their characters, the scene they shot on Election Day and what it was like to play out this season in the ever-corrupt House of Cards White House while the real one started to catch up.

'House of Cards': Neve Campbell Talks "Getting in Bed" With the Underwoods

The finale did not show LeAnn’s dead body and the rule of TV deaths is that without a body, she could still be alive. How do you interpret Leann’s fate?

Neve Campbell: I can’t talk about that.

Michael Kelly: You even saw my body, and Doug still came back.

When you got the scripts and read about the crash, what was your reaction?

We learned a lot about LeAnn this season, from her history with Aidan MacAllan and the lengths she would go to to get what she wants. How does this season cement LeAnn in the House of Cards world and bring her up — or down — to the levels of the rest?

Campbell: I think she finds out for herself that she can play with the big guys. She shouldn’t be underestimated. I don’t know that she’s ever gone that far as she does this season and she seems to step up to the plate in terms of dirty deeds.

If LeAnn survives, do you see Jane being her biggest adversary?

Campbell: The writers don’t tell us anything!

Kelly: That’s the interesting thing. They will typically let us come to the writers room and give us some insight before they start writing or in the beginning stages, but we don’t even know if we’re coming back, to be honest. Nobody has a deal. They technically don’t have to tell us yet. A show like Orange Is the New Black can be picked up for a three-year order because it’s a revolving door of people who can come and go. You can lose main characters and there will be someone new who comes to jail the next day. Our show is a little bit different than that and now that we’re coming up on the end of contracts, who knows? I hope. I love this job so much. But we know nothing about what could or could not happen.

Your characters getting together was a big surprise of the season. Was LeAnn seducing Doug a power play, or are there some feelings there?

Campbell: I think it’s a bit of both. There’s definitely a competition between them, but there’s an energy between them as well. And they’re both lonely people by choice. They’re both driven and obsessive with their careers and I don’t know that either of them are really capable of relationships. But she’s a sexual being and is human — she has needs! There’s always the chance that there’s the manipulation going on there as well. It’s fun that we don’t know the exact answer to that question.

In the finale, it does seem that Doug is greatly impacted by the thought of something happening to LeAnn. Does a final straw exist for Doug with Frank — and if so, would killing LeAnn be it?

Kelly: I think Doug definitely likes LeAnn. It’s funny, it truly is a love-hate relationship. He can’t stand the fact that they’re both vying to be these people in a position of power and to be the No. 1. All that’s undeniable, but then there’s also an attraction there that’s undeniable and he respects the fact that she is an equal to him. She is this powerful person. I don’t think he’s in love with her — I don’t know that Doug could love anyone — but he respects her and admires her. They got closer and closer as it went on. I’m sure there’s something in there, but it’s hard for me to imagine a scenario in which Doug would leave Frank’s side. 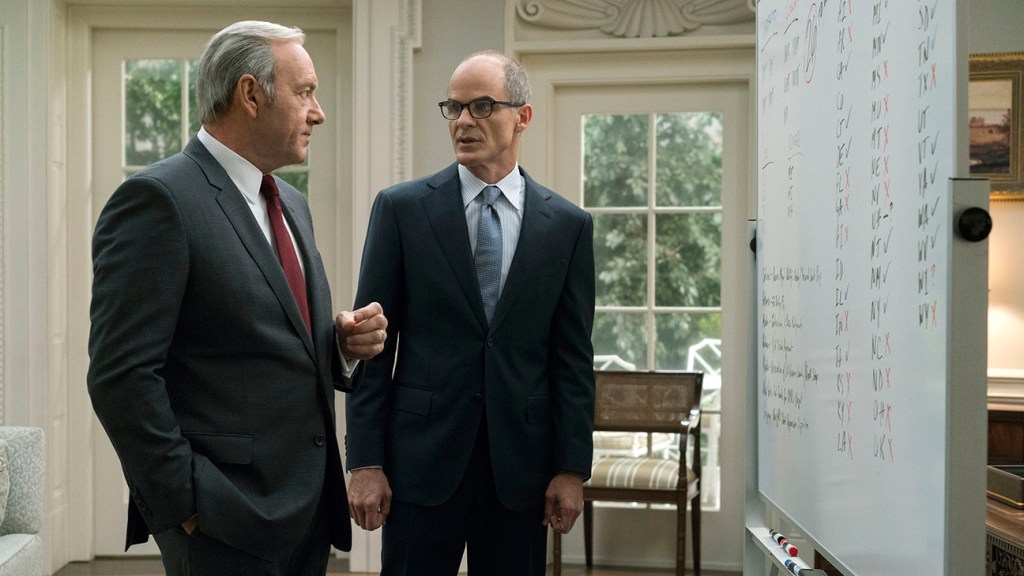 The viewers find out late in the game that Doug and Frank have been planning this coup all along that Doug will take the fall. Why does Doug have such a blind allegiance to Frank?

Kelly: It’s not just following Frank. His loyalty to Frank is a by-product of his loyalty to his job. He wants to be the best he can be at what he does, period. The best. That’s what makes him tick. It’s with everything that he does. He has a serious addiction to work and people so for him, it’s his job and Frank. Frank is sort of a by-product of being the best that Doug can be at his job.

House of Cards inaugurates its first female president with Claire. The writers assumed this would be playing out after an election victory for Hillary Clinton, so how does it feel under Trump?

Campbell: You want to say, “Oh, it’s so great to see a female become president,” but it’s for very dark reasons in our show. So it’s not exactly the way we’d like to see it happen. Inevitably, a good majority of us wish that had been the circumstances in the real world, to have a female president.

The real-world parallels are eerie and the season is very prescient. What was it like to play this out in the fake White House as the real one was catching up?

Kelly: It was insane. The day after the election was really tough. We filmed that day. It was somber. We were filming the dinner scene where the Underwoods ask Doug to take the fall. I remember everyone just with their head down and being still in shock. Kevin and I stayed up late watching it together and we were just like, “Oh, my God.” They write this well over a year before anyone even sees it and most of it was filmed before the election. We were doing it at the same time that all this was happening. We’ve never been a tear-from-the-headlines show, though inevitably every year something ends up happening. This year? Oh, my God. No one’s going to believe we didn’t just take this from the headlines.

Campbell: No one is going to believe that it was shot already and written before.

How does that provide a challenge for you as actors on this show that is usually more shocking than reality?

Campbell: It’s still shocking in a different way. There would be that fear that suddenly it’s too tame in comparison to the real world, but at the same time, it’s a different kind of crazy. These are characters who you’ve been following for five years, who you want to watch and who you love to hate, and there are stories that are being told not based on reality. I think some of us want escapism, even if it doesn’t seem like much escapism, but it is a different kind.

Kelly: Who would have thought that real-world politics actually got crazier than House of Cards? That’s disturbing. That’s truly disturbing to most of us.

LeAnn’s fate is certainly up in the air, but so is Doug’s now that he is a guilty man under house arrest. How do you imagine Doug’s future looking if he can’t be by Frank’s side?

Kelly: I don’t know that they will be separate. We’ve talked about some scenarios that could play out next season, but nothing set in stone. They might not be apart, we just don’t know yet or how they’re going to take the story. It would be weird for me if they were. I’ve been side-by-side with that dude for the better part of five years, and it would be weird to not be.

What do you think about Leann and Doug’s season-five fates? Tell THR in the comments below, and keep up with Live Feed for all House of Cards coverage.