The season-five finale of House of Cards ends with two now-famous words: “My turn.” Throughout the Netflix series, Claire Underwood (Robin Wright) has gone from wife to first lady and vice president, now emerging as the first female president in the political thriller’s fictional realm. Her character has taken the power from her male counterpart and husband, Frank Underwood (Kevin Spacey), something that had been hinted at in the past two seasons and finally came to fruition.

For the actress who plays her, it’s Wright’s turn also. On the series, she has gone from starring alongside Spacey to stepping into the role of executive producer and taking multiple seats in the director’s chair, helming a total of nine episodes to date. The Claire-centric final two installments of the new season, however, prove to be the most crucial episodes to the series’ future and potential sixth season (Netflix has yet to hand out a renewal).

Wright has also been getting rave reviews for her role in the Patty Jenkins-directed Wonder Woman; she will be starring opposite Ryan Gosling in the much-anticipated Blade Runner 2049; she appears in Zack Snyder’s Justice League; and her short-film directorial debut, The Dark of Night, was introduced last month at the Cannes Film Festival.

“I have a whole plethora of things,” Wright tells The Hollywood Reporter. In the chat below, the star reveals alternate lines for the pivotal final two words, muses about what an America under President Claire Underwood might look like and talks about the balance of directing the scene that turned Claire into a killer (“It was killing her — but she had to do it”).

Last season you directed four episodes. Going into season five, what were your conversations with new showrunners Melissa James Gibson and Frank Pugliese, who took over from creator Beau Willimon, about which episodes you wanted to direct?

As I recall, I asked if I could do the finale. (Laughs.) Because I knew it was going to be a stellar couple of episodes to sink my teeth into.

In the two final episodes you directed this season, tensions are at a high for Frank and Claire. What was the dynamic like while both directing and starring in those scenes with Kevin Spacey?

The good news is I had done it before. I don’t think I would have been able to take on that feat without having had an incredible family that we have there with House of Cards. They are seasoned veterans. The camera department, the sound department, the art direction, all of these people have been doing film and TV for years. I have been gifted with getting free cinema school. Going into this I was so coddled, as always, and in directing you are a family. You are all architects of this building and it’s not just one person. I just love creating with others.

Looking back, are there any scenes you wish you could reshoot?

Oh gosh, yes! There’s always that. I would love to hear some more experienced directors if they feel that as well. No matter what project you do or how much you have under your belt, you’re like, “Ahh, I missed that shot! I should have moved the camera faster!” I wouldn’t call them mistakes, you just learn from every beat that you see postproduction and you take notes and the next time, it is going to be better in that arena. But it’s more about getting more coverage or different lenses. And of course you think, “I didn’t direct the scene properly in this way. That beat should have been that because that dictates what the end of the scene says.” How an actor gives an intonation on a pronoun can change the whole tone of the scene.

For Tom Yates’ murder, you and Paul Sparks had to film a deadly sex scene. What were the challenges of directing and starring in that scene?

Paul is an incredible actor and I just loved working with him. When you get to have had a relationship on set as actors for a season and then you come in as a director, that dynamic is more enriched because there’s much more conversation on the different planes. How do we want to shoot it? What are you comfortable with? What am I comfortable with? Do we want to show nudity? It’s not really this show, nudity. It doesn’t enhance [it]. And I love trying to adhere to the structure that [David] Fincher implemented in the beginning, which is this very formal yet intimate environment. Trying to design shots for that scene was a lot of technicality. We had to get boxes and prop up Yates with boxes and then me on higher boxes so that we could get distance for the camera to be over my shoulder. That’s a challenge, of course, for all of us. But emotionally, where we got to in that scene and what we decided it should be as opposed to this direct venal act by Claire with her piercing eyes — it was killing her that she had to do this, but she had to do it.

He even tells her how beautiful she is while he’s dying.

Yates is Claire’s only casualty — that we know of. Now that she and Frank are separated, could Frank end up as a casualty as well? Would she be capable of that? 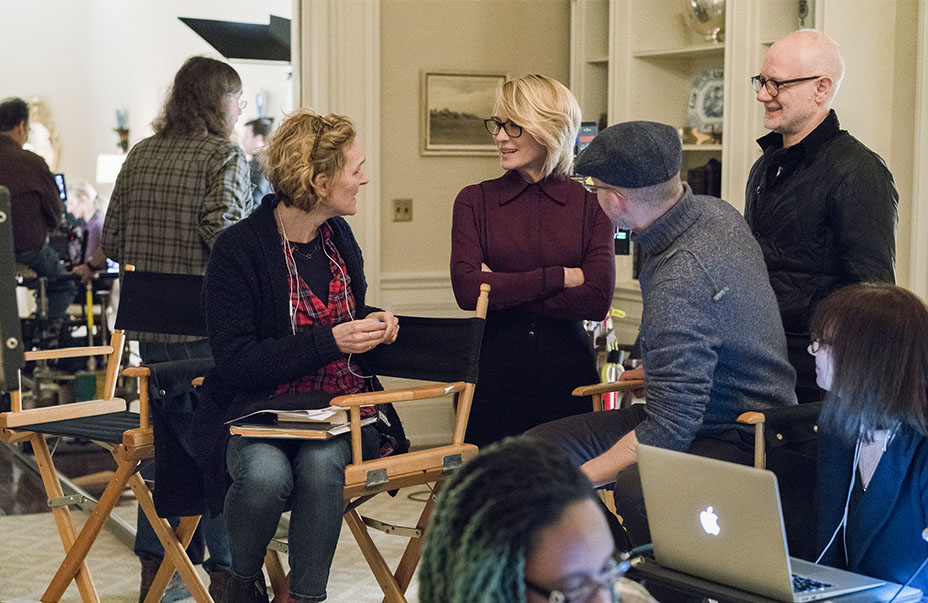 You chose to direct what may now be the most pivotal moment in the entire series, which also provided the audience with the moment when Claire breaks the fourth wall for the second time of the season. How do you define Claire’s direct addresses?

All of that is a collaboration with the team, the writers [and] Kevin Spacey. Kevin has incredible ideas. These decisions come to a fruition with all of us discussing it. What does it mean for the arc? What does this mean for next season? Where are we going to take it? We always have to jump ahead. It’s not an isolated incident. It’s very thought out. We’ve got more story to tell down the line.

How many takes did it take you to deliver those two words?

We did different versions of different words. We did probably 12 takes.

What were the different words?

It was a toss-up! We do this every day, which is so much fun because it’s a Rubik’s Cube and then you go, “Ah! That’s the one” when it lands. It was everything from, “Now it’s my turn” or a space in between, “Now … my turn.” All of those different variations were played with and then we chose collectively at the end which one we would use in the final print.

What can you officially say about a potential season six?

That’s a fair enough tease, but …

How ambiguous can I make it?

I would personally like it to be the greatest president we’ve ever had. How she gets there and achieves that is a whole other thing regarding the opera of the show.

What are the biggest differences between Melissa and Frank’s vision for the show compared to what creator Beau Willimon originally had in mind?

The vein [and] the artery of the show is so set in stone. We’ve been doing it so long and Frank and Melissa have been writing as long as we’ve been acting in it. It lives on its own and we just try to enhance certain things and try not to recycle the same ideas. You’re always trying to come up with twists and turns with this kind of drama. And again [having] the key to not give the audience what they expect. Let’s shock and surprise them.

Your Wonder Woman director Patty Jenkins is breaking records at the box office. Do you have any interest in directing a superhero film?

I haven’t thought about [directing] a superhero movie. I have just been so marveled and thrilled by the response of Wonder Woman. Not only for Patty Jenkins, a female director having one of the biggest box-office smashes, but what that movie is about. It’s about peace and equality, but it’s really about love and the way she emulates that. Her vision [and] her style came across. And with Gal Gadot, you couldn’t have had a better Wonder Woman with the qualities she conveys. Zack Snyder was directing Justice League as we were finishing up Wonder Woman. Gal moved onto that when we finished. So the day I wrapped Wonder Woman, I went over to the other side of the studio and shot my couple of scenes in Justice League.

There are so many things on my plate right now, I hope I get to do it. I hope I get the opportunity to do something. My intrinsic want and attraction to a story that I would like to direct is a relationship story. I know that’s a broad answer, but that’s where I start leaning every time I think about it. I don’t want to go do a war story.

You directed your short film The Dark of Night, which was introduced at Cannes. Hundreds of members of the House of Cards team worked on it. What was that experience like for you?

The shooting of the film was this beautiful labor of love from all of the House of Cards crew. Everybody donated their time and resources for free on their weekends off. It was right before I started prepping the finale. They were rushing to get this done before Christmas because right after Christmas I went into prep for the last two episodes. Nini [Le Huynh], who is my assistant for the last nine years, put the whole thing together. She produced it [and] gathered the troops. [It] was much more than we ever expected, just beautifully shot, what the art production did with the dilapidated diner — that diner we shot in is the diner Barry Levinson shot the movie Diner in. It was completely run-down and they revamped it and gave it a beautiful facelift and we shot in there. We basically had 12 hours on camera, over the two days. That was about it. It was a rushed job, but everybody was such a team player.

Thierry Fremaux, who is the director of the [Cannes] festival, is a friend, and his first year there was the year that I was on the jury years ago. I reached out to him and said, “Can we be a part of your baby in any shape or form? We’d love to premiere it there.” And he was like, “Of course!” He came up with the idea to have it open their Cannes Classics opening-night film, All That Jazz. It couldn’t have been a more perfect combination. It was received so well and it played beautifully in the theater. And they totally got it! (Laughs.) The French get it. It’s not a linear piece. It unfolds and you’re confused the whole way until the very last minute where you figure out what it all means.

What do you want to see from President Claire Underwood? Tell THR in the comments below and check Live Feed for full show coverage.