[This story contains spoilers from the first five episodes of the sixth season of Netflix’s House of Cards.]

“A President Buries a President.” That’s a magazine headline glimpsed early in the final-season premiere of House of Cards, above a glossy full-page spread depicting President Claire Underwood (Robin Wright) at the casket of her late husband, Frank (Kevin Spacey). Though the mystery of what really caused Frank’s sudden death looms large throughout the season, the most satisfying moments of Robin Wright’s long-overdue moment in the spotlight focus not on Frank himself, but on the male power structure he represented, the sense of ownership he still exerts from beyond the grave, and on Claire’s struggle to bury him once and for all.

Claire has long been shown to be just as power-hungry as her husband, but quieter and more careful, playing a longer game. Season five ended with Claire finally in the Oval Office, looking straight into the camera and declaring “My turn,” having outmaneuvered her husband and claimed his signature move — the fourth-wall break — as her own. But as his successor, she faces a completely different and far more insidious set of obstacles than Frank ever did in his own ascent to power.

The season’s opening image is a young, wild-haired Claire in the woods, staring directly into the camera with a face of steely defiance, a cigarette in one hand. Hard cut to the adult Claire, listening coolly as her vice president, Mark Usher (Campbell Scott), details a deluge of graphic death threats, Photoshopped violent images and vicious social media sentiments that have followed her inauguration (“God never intended a woman to rule this land. She is the antichrist,” reads one example). The number of threats is “significantly up” from when Frank was in office. Her male aides want her to cancel a scheduled July Fourth appearance and, though she refuses, the sense is that she’s fighting a deeply gendered uphill battle.

“For us, the opening image of that girl looking straight into the camera, her younger self, that in a way is a touchstone for Claire. That is who she’s trying to get back to. When she was wild and free and fully autonomous and at her most self-actualized,” co-showrunner Melissa James Gibson tells The Hollywood Reporter.

The season’s first five episodes follow Claire as she finds her way back to some approximation of that power, despite the odds that are stacked against her. “She is both the grieving widow and the first female sitting president,” James Gibson says. “She kind of can’t win, because everyone is trying to manipulate her, and determine what that looks like.”

That “everyone” is a cabal of political animals who underestimate and patronize Claire at best, and openly attack her at worst. Most prominent as antagonists are the newly introduced Shepherd siblings, Annette (Diane Lane) and Bill (Greg Kinnear), right-wing tech billionaires modeled on the Koch brothers. Prior to his death, Frank had forged a quid-pro-quo relationship with the pair, who are now looking to collect by any means necessary — a constant reminder of just how much Claire is still boxed in by her husband’s decisions.

Annette is an adversary crafted in Claire’s own image — placid and dangerous — and though the pair are former schoolmates, there’s no love lost between them. One of the best scenes in the season is a powder room showdown in which Annette delicately and devastatingly skewers the sham that was the Underwood marriage, putting Claire uncharacteristically on the back foot.

Bill is quickly revealed to be a true-blue bully, a misogynist whose deep fury at Claire’s presence in the White House is about much more than what he was promised by Frank. In contrast to Annette, Bill makes little effort to couch his aggression; within the first episode, he has seemingly staged an assassination attempt against Claire and planted Frank’s ring in the White House residence, both as scare tactics designed to unsteady her. His most jaw-dropping transgression, though, comes at the climax of an episode in which he’s been aggressively pushing a regulatory bill. Stepping behind the Oval Office desk, Bill puts his own hand over Claire’s and physically forces her to sign the bill. She becomes perfectly still as this happens, looking directly into the camera, frozen. It’s a skin-crawling moment of quiet violence that resonates all the stronger in light of both season two’s revelation that Claire is a rape survivor, and this season’s flashbacks to male bullying during her childhood. “I felt emasculated,” she notes of the bill signing later, in a loaded choice of words.

It’s only in episode five that the season finally shows its hand, and Claire’s master plan is unveiled in a thrilling sequence which, not coincidentally, sees her prevent the signing of a document. As episode five begins, Claire has vanished from public life in the wake of a polarizing peace deal with Russia. She hasn’t left the White House in weeks, prompting widespread speculation about her motives, her mental state and her fitness for office. A photograph is circulating that captures Claire in what appears to be an uncharacteristic public breakdown: weeping, mascara running, the sum of America’s worst fears about a woman in power.

“It’s actually not as easy as it looks,” Claire confides to the audience, because of course this photograph only exists because she wants it to. The key ingredient in making that face, she says dryly, is “thinking about all the ways in which men have tried to manage me over the years.”

And indeed, amidst the furor, her largely male staff is working behind the scenes first to manage her and later to eliminate her. Mark likes to think of himself as a good guy, and so he makes a concerted effort to gently talk some sense into Claire, giving her a chance to resign. “You have a weakness for strong women,” Annette tells him. “You think they need your help.” But Claire appears beyond reason, playing the hysterical damsel to perfection, and so Mark agrees to invoke the 25th Amendment and replace her.

At the cabinet meeting where the letter invoking the 25th is to be signed, Claire walks in unannounced and calmly fires everybody in the room. Simultaneously, Mark gets a call from the FBI. He’s being brought up on charges of collusion with Russia, and in a beautiful moment of table-turning, Claire gently offers him the chance to resign. Later, Annette pulls what she believes to be a trump card on Claire, threatening to reveal the long-buried secret of her abortion. Unfazed by this particularly female act of savagery, Claire tells her to go ahead, before leading Annette into the briefing room to show her the final stage of the plan: a brand-new, all-female cabinet. “Our work begins today,” Claire declares, preparing to swear in her new cabinet. “I do solemnly swear to take no prisoners.”

This is Claire tapping back into her untamed younger self. “There is some pure power felt in that first moment [of the season], and some of the rest of the season is a giant [reach] back to that,” co-showrunner Frank Pugliese tells THR. “Tapping back into that pure power before it was pulled apart, questioned, played with, negotiated.” James Gibson adds: “Before Francis was ever a part of her world. That’s her North Star.”

Claire’s bombastic moment of victory is infinitely more cathartic and satisfying than any of Frank’s because it’s rooted in something so deep and real and familiar. It inevitably calls to mind infuriating, innumerate recent images of real-life Washington rooms filled exclusively with white, middle-aged men. For a moment, twisted and malevolent though all its key players are, House of Cards becomes something like comfort TV. And for the first time, Frank Underwood feels truly buried. 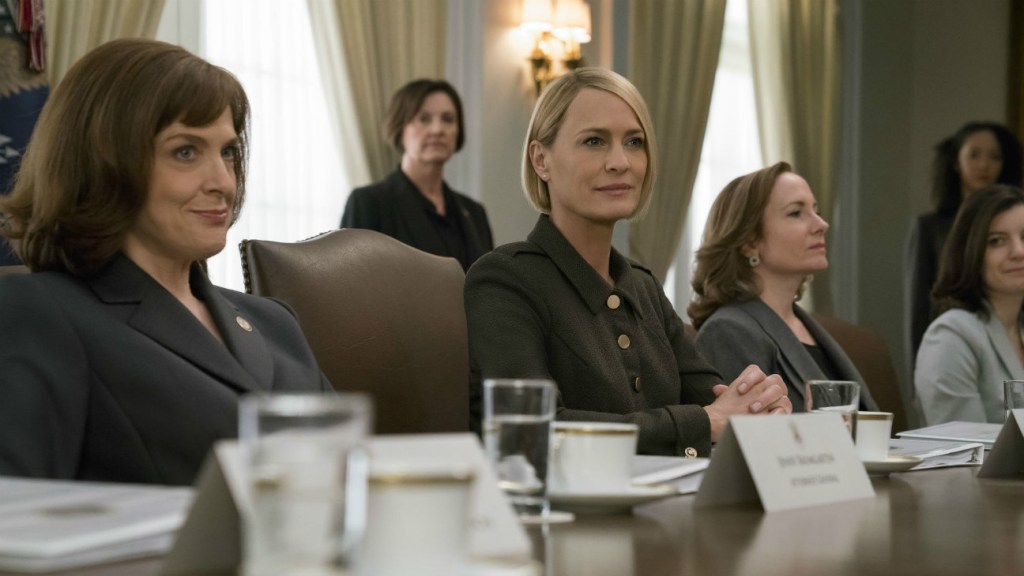