[This story contains major spoilers from the entire sixth and final season of Netflix’s House of Cards.]

In what has now become a tradition on House of Cards, another season ended with a few spoken words and a look straight into the camera. This time, however, the screen was fading to black for the last time.

“There’s a full-circle element to all of this,” co-showrunner Melissa James Gibson explained to The Hollywood Reporter of the final scene of the series. “How Francis invited us in at the beginning, this is like the coda to that.”

The sixth and final season of the Netflix political saga starring Robin Wright ended — as was promised — with a “beautifully macabre” shocker of a series finale. Much like Kevin Spacey’s disgraceful exit from the series, the mystery of who killed Frank Underwood (Spacey) haunted the entirety of the final season. After Spacey was fired over sexual assault allegations at the height of the #MeToo movement, the House of Cards writers, led by showrunners Frank Pugliese and James Gibson, quickly got to work writing him out of the show when production on the final eight episodes resumed earlier this year.

Their decision was to kill Frank offscreen, but not reveal who had killed him until the final scene of the series, which invited an “inevitable showdown” between President Claire Hale (Wright), who relinquished her Underwood name, and Frank’s former right-hand man Doug Stamper (Michael Kelly).

Frank’s fate was revealed ahead of the season in an early clip, and THR has since reported that the tombstone bearing the Francis J. Underwood name is now open for public viewing in a cemetery in Gaffney, South Carolina — a real town and the fictional hometown from which Frank hails in the show. But even though his death was announced in the first scene of season six, House of Cards quickly planted a seed of speculation into how exactly he died. “You want to know what really happened to him,” Claire tells viewers in one of her many fourth-wall breaks in episode one. “A man like Francis doesn’t just die. That would be, what’s the word? Convenient.”

As the season goes on, it’s revealed that the public believes Frank died of a heart attack caused by an accidental overdose of his liver medication. Claire told the world that she woke up to find him dead next to her in bed. House of Cards viewers, however, know that Claire and Frank have separate bedrooms in the White House, for one thing, and that at the end of season five, Claire had banished him to a hotel. Claire eventually says she believes Frank was murdered, but is she telling the truth? As it turns out, she was.

After “weaponizing” assumptions made about women and abusing her power, Claire revealed she was pregnant with Frank’s baby. In season two, Claire and Frank had explored their fertility options and a blink-and-you’ll-miss-it scene in season six confirmed that Claire ended up using Frank’s frozen sperm to impregnate herself. In the final episode, a very pregnant Claire is also on the verge of a nuclear war she threatened in order to distract from the fact that many powerful people want her dead.

In the final scene, when Doug arrives at the Oval Office, Claire is finally convinced that he was the one who killed Frank. “I think she knows it wasn’t her, so then the next logical conclusion for her is definitely Doug,” Kelly told THR of the realization. Doug admits that Frank was coming to the White House to kill Claire after the events of the season five finale, and that he stopped Frank to “protect the legacy from the man” and a murder that his reputation could never bounce back from. Doug poisoned Frank, using his own medication, and Claire found Frank dead the next morning in his own bed.

“He walked into the Oval and that final showdown wanting the pardon for Frank,” Kelly explained of Doug’s motivations. He gave Claire the list of people who wanted her dead and, in turn, he wanted the pardon. But she said no. “Then at the end, he’s willing to settle for her just saying it out loud, that she’s nothing without him. And she won’t. Once she turns the letter opener on him, he doesn’t fight. He doesn’t try to live,” says Kelly of Doug surrendering and “releasing his demons.” 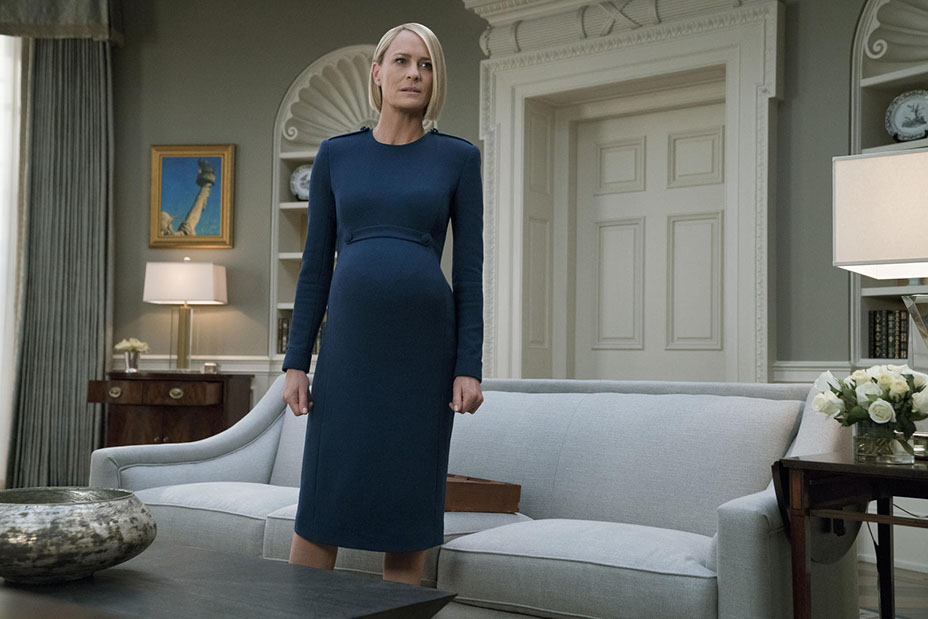 James Gibson said the final words that Claire spoke to Doug explain her motivations. “There. No more pain,” she told Doug as he bled out in her arms. The line is a callback to the beginning of the series, which opened with Frank explaining useful and useless pain when snapping the neck of an injured dog. “In the end, Claire is, to some degree, freeing Doug Stamper and looking at us in a full-circle way,” she said.

After Doug’s final breath, a bloody and messy Claire indeed looks at the camera with newfound, and perhaps crazed, resolve. In the end, she is the survivor. “One of the really fascinating questions is: Who is the biggest monster of them all?” James Gibson said of Claire winning, but not without cost.

Where does she go from here?

“Claire has been negotiating the whole season around who is going to partner with her,” Pugliese explained. “Ultimately, maybe there’s a realization that she has to do it all by herself. There’s an isolation that comes with that. So it’s a feeling that she’s both free and there’s a relief, but ultimately alone because of it.”

The showrunners ended on that Claire cliffhanger because of the show’s long-gestating relationship with the audience, who the pair said are “active participants” in where the story hypothetically goes.

“The finale itself is not really final until it’s played out with the audience,” Pugliese explained. “Whatever the audience imagines after is all part of the end of the show. And there are questions. No doubt about it. What story is [Claire] going to tell? How is she going to get away with this? Now that she’s done with this last piece, will she really move on? But that’s left up to the audience and their imagination.”

One of the biggest surprises in store for Claire could be how motherhood impacts her. “Claire [is] essentially weaponizing motherhood in a rather ruthless way. And then the great surprise is that she doesn’t feel what she expects to feel. It’s much more complicated,” James Gibson explained. And if you ask Kelly what his hopes are about the dangling threads Doug left for reporter Janine Skorsky (Constance Zimmer) to discover, he says he hopes journalism wins.

“I think a lot of the audience will wonder, is Janine going to get Claire? And I think you can probably say that Claire’s not done,” Kelly says of the ending. “Is Janine going to have time to get that story out before she’s taken care of? Claire is not one to let things go by the wayside.” Still, he adds, as someone seeing the real politics in the current climate, he’s pulling for Janine to avenge Tom Hammerschmidt and all the other deaths “and do what she’s been wanting to do for the last six seasons and expose the Underwoods.”

In the end, the showrunners wanted to establish that Claire could be “every much of an antihero” as Frank ever was. That statement is reflective of a culture that is increasingly elevating women on screen with meaty and complicated roles. James Gibson says that when Claire killed her lover Tom Yates in season five, she cemented herself as an equal to her husband. “She proved her hands were just as bloody as his. They were equal — she even said that. What felt true to us is that she reveals herself to be every much of an antihero as Francis ever was. She’s allowed to be as complicated and surprising and dark and everything he ever was.” 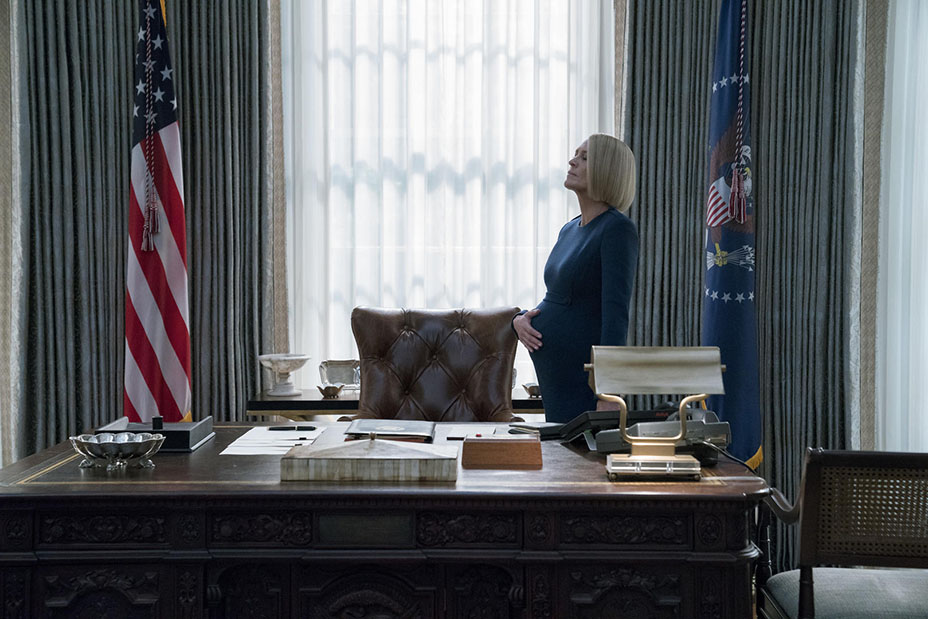 How 'House of Cards' Pulled Off That Timely, Feminist Coup

The final season of House of Cards is streaming all eight episodes now on Netflix. Head here for all of THR‘s final season coverage.