“No matter what you think you know, it’s just the tip of the iceberg,” says Dylan Farrow to open HBO’s Allen v. Farrow.

In the first episode of Amy Ziering and Kirby Dick’s four-part docuseries, which premiered on Sunday night, the daughter to actress Mia Farrow begins to speak in detail about the now-famous allegations of incest that she has leveled against disgraced filmmaker Woody Allen, who was Mia’s partner during Dylan’s young childhood.

“I haven’t spoken publicly about him for decades,” says Mia when she appears on camera. “But that’s the great regret of my life, that I wasn’t perceptive enough. It’s my fault. I brought this guy into our family. There’s nothing I can do to take that away.”

It was because of Dylan that Mia decided to relive such a fractured time for her family. “[Mia] said, ‘I’m only doing this for my daughter. Never in a million years would I do this otherwise. I wanted this all to go away. I’m done. It’s past history,’ ” Ziering recalled in a recent story with the The Hollywood Reporter when discussing the docuseries.

Ziering talked to THR about the first time she sat down with Dylan. “I was extremely struck by her, her candor, her thoughtfulness, her analysis. She had had a lot of time to process this. She wasn’t angry or bitter. She was just in pain,” she said.

Allen v. Farrow was filmed in secret over three years and purports to reveal new evidence and several bombshells about one of Hollywood’s most notorious scandals. Dylan first alleged in 1992 that Allen sexually assaulted her when she was 7 years old. She detailed her claim in a 2014 column in The New York Times, but it was an op-ed for the Los Angeles Times in 2017 amid the #MeToo movement that would ultimately bring her side of a highly documented story to the forefront, and push the once-revered filmmaker into Hollywood’s rearview mirror. (Allen denies ever having been sexually inappropriate or abusive and released a statement after the premiere.)

When the allegations first surfaced in 1992, neither Ziering nor Dick were following the story closely. But they both felt vaguely sympathetic toward Allen.

“I was a grad student and doing a doctorate in comparative literature,” Ziering said. “I don’t want to amplify it but the [Allen] PR campaign was extremely successful in persuading most of us that the story was not one that had a lot of credibility unfortunately.”

Added Dick: “I just thought, ‘Well, it’s very complex, there must be two sides.’ The first film that I made on sexual assault was Twist of Faith about clergy sexual violence. And that’s when I started to understand the survivor experience and the pain of coming forward and the likelihood that if somebody is coming forward, there is a strong likelihood they’re telling the truth. That’s when, for me, things changed. But I was played in some ways like the entire country [about Allen].”

Coming off their award-winning documentaries The Hunting Ground and The Invisible War, the documentarians sought to reexamine the high-profile allegations against Allen in 2016, one year before Dylan’s brother, Ronan Farrow, would go on to publish the exposé that would out Harvey Weinstein as a sexual predator and spark the #MeToo movement.

Dylan, who worked with the #MeToo and Time’s Up movements, has given several TV interviews about her claims. But convincing her to open up for an in-depth docuseries was a bigger ask.

“Ronan was working against us in the beginning,” recalled Amy Herdy, the lead investigative producer at Ziering and Dick’s Jane Doe Films, in a recent interview with THR. “He advised her to not do it. I think he felt that it wasn’t going to do her any good, that it was just going to subject her to more punishing backlash and ridicule and hate mail.” But when Herdy discovered court records associated with the case that had never been made public, she reached out to Dylan to say, “I think there is so much more to your story, and I feel that you’re being, rightfully so, very guarded, and I really need you to try to trust me and open up and tell me everything that you possibly can because I would like to dive down the rabbit hole with you on this.” Dylan agreed, and started to share the names of people who could support her claims. 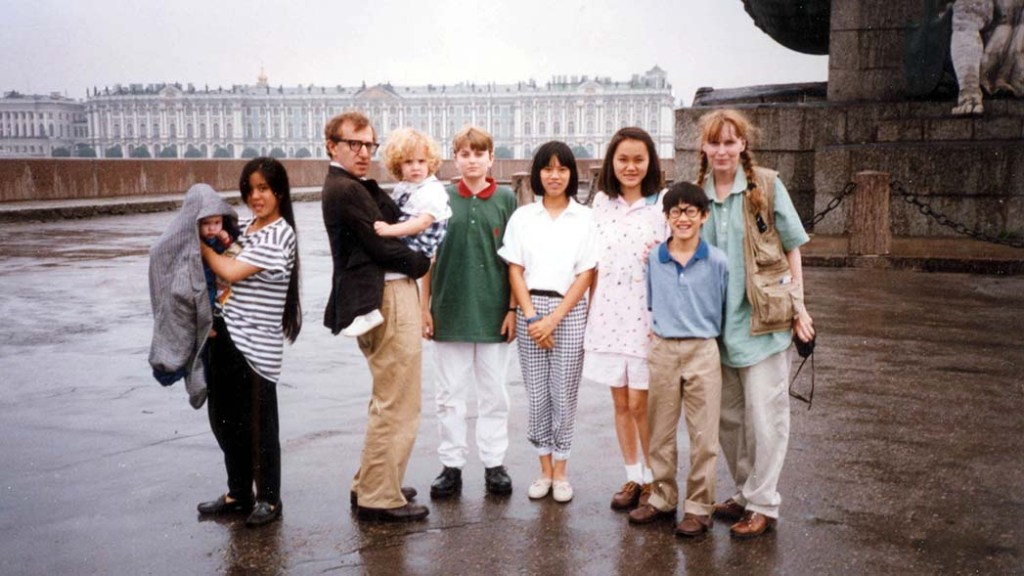 The first episode features unprecedented access with Dylan and Mia Farrow, interviews from Fletcher and Daisy Previn (two of Mia’s children with her late ex-husband André Previn), and testimonies from Farrow family friends Casey Pascal and Priscilla Gilma, who corroborate the inappropriate behavior between Allen and Dylan, then a child, that is described by the mother-daughter pair.

Painting a picture of Allen grooming her from a young age, Dylan remembers being on the receiving end of what she describes as “intense affection all the time” from a “hovering” father figure. “I was always in his clutches,” she says of the celebrated Oscar winner. “He was always hunting me.”

Ronan, the biological son of Mia and Allen, says about his older sister, “Over time, Dylan went from being outgoing and effervescent and talkative to her having this sadness and this withdrawn quality. And I didn’t know as a kid how to contextualize that, but now in retrospect I understand that was a pattern of something very serious and alarming.”

Dylan describes instances of Allen, in his underwear, cuddling with her in bed as a child. “I remember his breath on me. He would just wrap his body around me, very intimately,” she says of a behavior that Mia and Gilma say they witnessed. “Sometimes he would also kneel in front of her or sit next to her and put his face in her lap, which I caught a couple of times and I didn’t think that was right,” Mia adds.

Shortly after, at age 5, Dylan began therapy for being shy and withdrawn. A title card reveals that she told her therapist she had a “secret,” but that was never mentioned to Mia. “At the time, I thought this was how fathers interacted with their daughters,” says Dylan. “I was a kid, so I internalized it. I thought that if I felt weird about it, that was on me; that was my fault and that was because I was doing something wrong.”

Tisa Farrow, Mia’s sister, describes witnessing Allen inappropriately applying sunscreen “suggestively” on Dylan one day when the kids were running around outside naked. Dylan also recalls being alone with Allen at the family’s country house and says “he was directing her on how to suck his thumb. Telling me what to do with my tongue.”

One day, when Mia saw Allen slap away Dylan’s hand and she asked him why, he told her, “She grabbed at my penis.” Mia remembers thinking, “What kind of thing was going on that involved private parts at all? Maybe there were things that I didn’t know that might be happening.” That’s when she decided to confront Allen, but he denied it. “He can’t be a pedophile. Of course, what am I saying?” she says. Allen eventually began seeing a clinical psychologist about behavior towards Dylan that the psychologist deemed was “inappropriately intense” but not sexual.

The first episode concludes when Mia recalls how, on Jan. 13, 1992 and amid her concerns over Allen with Dylan, she discovered pornographic Polaroids that Allen had in his possession of her other daughter, Soon-yi Previn — who is Allen’s current wife and who was in her first year of college at the time. When Mia told Dylan and Ronan about the Allen and Previn development, Dylan recalls having the following thought: “That was sort of the first instance that I thought, ‘Oh, it’s not just me.'”

Allen v. Farrow will continue to air weekly, Sundays on HBO. As for what’s ahead, only Mia, Dylan and Ronan have seen the filmmakers’ finished product. Herdy shared with THR their reaction: “I think none of them realized that we were going to be able to put together something as monumental as we did.”

Feb. 21, 8:30 p.m. Updated to include that Allen released a statement after the premiere.