Amazon’s sci-fi series Tales From the Loop is loosely based on the book of the same name by Simon Stålenhag — but it’s really a televisual interpretation of the Swedish artist’s paintings that depict picturesque landscapes punctuated by robots or futuristic technology; Edward Hopper with a sci-fi flair.

Creator Nathaniel Halpern told The Hollywood Reporter that he was “quite taken” by Stålenhag’s unique aesthetic when producer Matt Reeves (Batman) and his partners first introduced him to the painter’s work.

“He has this wonderful marriage between the ordinary and the extraordinary and it’s very hard and rare to find a unique aesthetic within science fiction these days. Usually it reminds you of something else. Here it really just stands on its own,” Halpern explained. “So I was really taken by the quality of the paintings, but also I felt they were quite emotional. There’s a poignancy to the image that I responded to. So then the notion of adapting paintings into a TV series on top of that felt wonderfully unique, and it just felt like a wonderful opportunity.”

'Tales From the Loop': TV Review

After Reeves got Halpern, a veteran of FX’s Legion, to sign on for the series, Halpern used Stålenhag’s book as a touchstone to write an eight-episode season about the people living in a small Ohio town above the mysterious underground facility The Loop, where the Mercer Center for Experimental Physics has built a machine that unlocks and explores the mysteries of the universe.

Below, Halpern explains the process he used to write an eight-part series that treats sci-fi elements as the background for human stories, how a different painting corresponds to each episode and whether the series could sustain a second season.

What did you take from the story in the book for the show?

The book itself is the collection of the paintings and there are these little sketches of text, but it’s mostly the paintings. He certainly had a scenario which was there’s this town, and the facility beneath the ground is the Loop, and the byproducts of experiments litter the landscape. I took that core concept that unifies his work and used that for the series as well. But in terms of actual stories that are in the show, they have to be treated whole cloth and the process of that was really a matter of there’s a painting that corresponds with each episode. That is a primary inspiration where I would look at a painting and think, “What is the story I see here? What is the context?” and dream that up, and that would begin the process for each story.

There’s plenty of TV based on existing IP, but this is definitely a different situation.

We’re more used to different types of adaptations — for instance, from a book, a text, to the screen — and here to go from one visual medium to another and really have it be a hyper-visual adaptation, I think that’s wonderful and unique, as opposed to bringing imagery to text. 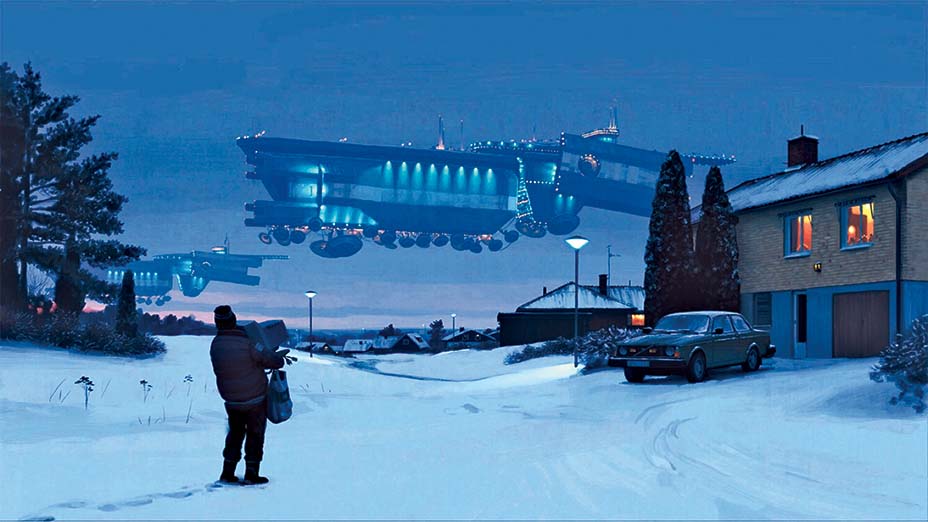 What was the development process like? How long have you been working on the series?

I think roughly from being introduced to Simon’s work and to right now is almost five years. In hindsight, just thinking back to it all, I think I had the stories and the structure very early on in the process. I think something that took time was that first story, because it had the unique challenge of how do I tell what I wanted to do with the show — which is these simple, poignant human stories — how do I tell one of those stories, but also have the added burden of having to tell the story of the world in which the show takes place and explain that? How can those both elegantly serve each other? That took a while to find a way for those to coincide. And then so [episode] two and on, it doesn’t have that burden of having to build the world.

Each episode introduces its own element of science fiction and wonder. But explaining the setting, that was a trickier thing because I didn’t want to do a mystery show or a puzzle show. I wanted people to get oriented and so they can invest in the emotion of the character. My hope in the way I approach it was if the character’s not asking the question, there’s no reason we should. To take our cues from these characters that we hopefully can relate to and follow them on their journey.

It’d be a different story if there was an investigator at the center of the show, but I just really tried to shy away from all those elements that would prompt the audience to ask questions. But of course, some people that’s how they engage, and there’s no avoiding that, but it’s just not how the show was designed.

So there’s one painting that corresponds to each episode?

There’s a lot of imagery that is strewn throughout the season, but there are these core images that we really try to be faithful to. The episode with the sphere, there was a painting of what seemed to me a grandfather and grandson walking out to that sphere. That was the painting and the story was born. If you’ve seen that image, that painting takes place in winter. We just happened to be shooting during summer at that point, so I couldn’t be faithful to the season. But we built that structure and tried to be as faithful as possible in that regard. 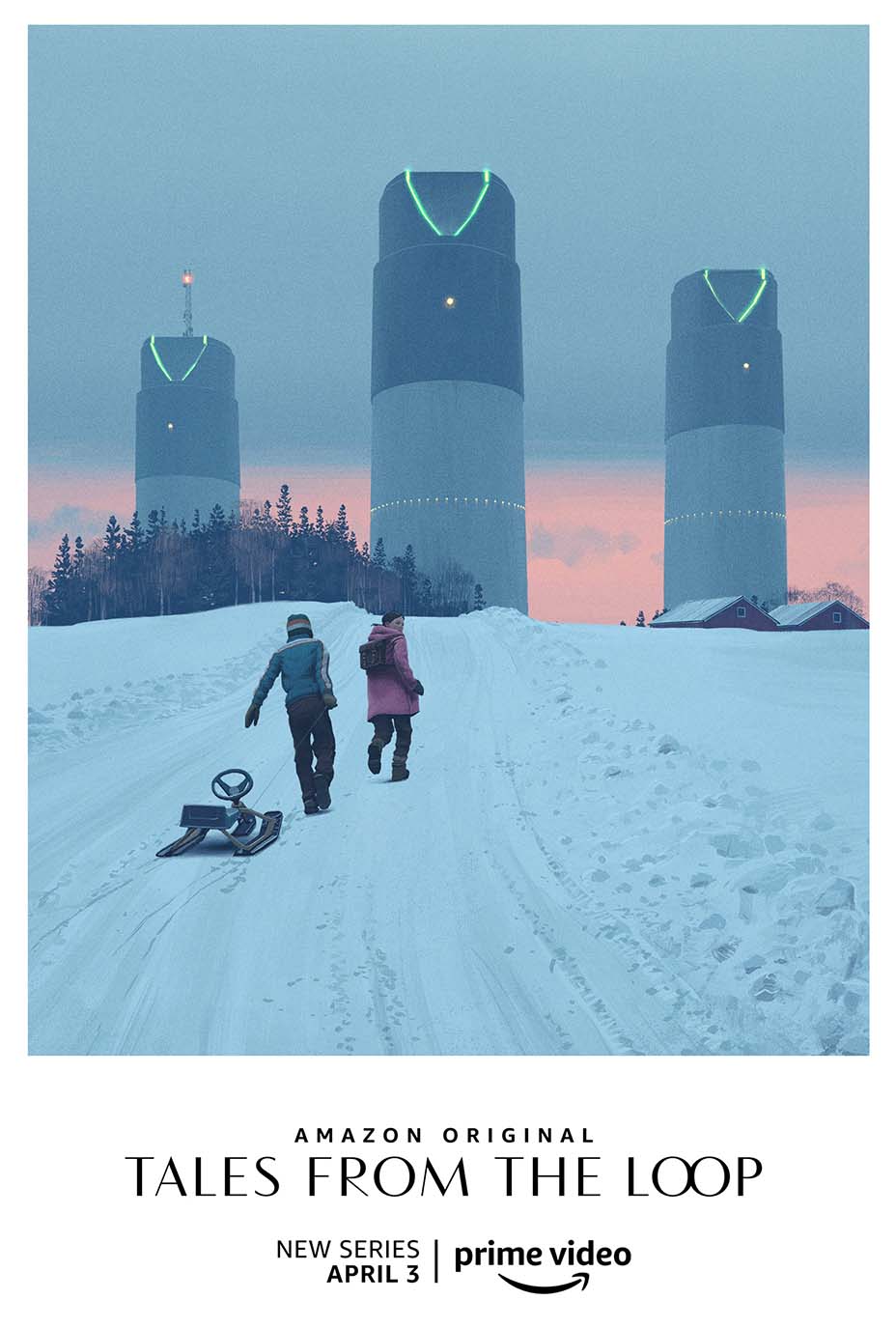 What was it like working with your production designer and each director to bring those scenes to life in a faithful way?

It’s tricky because Simon makes it look effortless, but it’s actually a delicate balance that creates that quality of his imagery. What’s wonderful is so often in science fiction, the science fiction is almost fetishized. It’s “look at the shiny toy,” and it becomes the star. Here, it really was about embracing an aesthetic where we treat the science fiction like it’s ordinary and don’t frame it like it’s special. As a result, it lends this fascinating sense of reality to it in that it’s not treated as special and nor are the characters treating it as special along the way. So there’s the cooling towers in the distance very often throughout the show. And the thinking was, this is a factory town. Those might as well just be smokestacks. Don’t shoot them any differently than you would if we were just shooting in the factory town. Or if there’s a robot in the field, that’s no more special than a tractor that’s broken down in a farm field. And as a result I think it does have this unique aesthetic that we haven’t really seen before.

'Tales From the Loop' TV Series Set at Amazon

That’s kind of like what we’re living right now — when you watch a pandemic movie the characters are living this insane experience where everybody knows that something crazy is happening. Whereas in reality right now, we’re all just living our normal lives in our houses.

Yeah, it’s interesting you say it that way. It’s almost your first instinct is like, well, this would change everyone’s life forever. Somehow humans adapt. And it normalizes it.

This is a very human story.

I wanted the opportunity to tell these human and poignant stories. I don’t think there are enough stories like that. So often when you watch most things, it’s exploiting anger and anxiety and fear, and you would think those were the only emotions humans were capable of. And there’s a whole other spectrum of emotion that we experience in our lives that I don’t see on screen enough. So I’m always looking for a vehicle to bring those qualities, and with Simon’s work it was this perfect marriage. When I first met Simon it was wonderful to hear him even talk about it this way — that it is more about the people and the feeling than the robot. That sense of melancholy or longing that’s in his paintings is very intentional.

Within the structure of it, it’s all very tricky and hopefully it comes across as elegant. It’s not an anthology series. It’s serialized because these characters can move forward in the same setting. You get a portrait of a town and the people that live there, but there’s more — there’s an additional reason for doing that. Each painting of Simon’s has an ability to reset the wonder because the different elements of science fiction, you rarely see them cross over in those paintings. You don’t see two elements of science fiction, it’s usually one element within an ordinary setting. So, for a show, how does an audience not get too comfortable, and how do you keep that wonder alive? Every episode reinstates the wonder with a different element of science fiction. So you never quite know what’s coming next. You never get to that “I get it” moment.

But an even more basic reason why the show is structured that way is that the alchemy is it’s an ordinary person and something extraordinary happens to them. But when too many extraordinary things happen to an ordinary person, they’re not ordinary anymore, and you can’t relate to them. That’s why different characters take center stage — so we can keep that feeling alive of “I relate to this person” and then this extraordinary thing happens, versus “this person has such a convoluted science fiction backstory that at this point I can’t recognize the person.”

Is the story closed-ended? Is there room for a second season?

Oh yeah, I hope many seasons. I’m not interested in cliffhangers. This is not a mystery show of any kind. And while the individual episodes have a film-like closed-ended story quality, the season does as well in that we have told loosely the story of one family and it comes to a satisfying conclusion, but the Loop itself is this wonderful storytelling generating device and really the town is more the star of the show than anything. So the possibilities are somewhat endless to continue to tell stories about the people who live here. There’s many more stories to come if there is an appetite for a second season.