Big Little Lies author and executive producer Liane Moriarty says she was “agonizing” over whether or not to return to the world she created with her best-selling novel for a second season of the HBO drama.

Created by David E. Kelley and intended as a limited series, the first season was an adaptation of Moriarty’s novel, with the seven episodes covering all the source material. But after becoming a critical and watercooler favorite, HBO put a second season of the Emmy-winning show in development. That’s when Kelley, along with executive producers and stars Nicole Kidman and Reese Witherspoon, turned to Moriarty to see if the writer had ideas to expand the story of the Monterey Five.

“I was saying, ‘No, no. I think it’s a great idea to do a season two, but I’m not interested in writing it,'” Moriarty tells The Hollywood Reporter. “But then I kept saying, ‘But if you do it, you could do this.’ So I kept coming up with different scenes.”

Ultimately, it was the addition of a new character that sparked what would become her 200-page novella that Kelley would adapt into the season two screenplay. The character, Mary Louise Wright, comes to Monterey in search of the truth about her late son Perry (Alexander Skarsgard), who was pushed to his death by Bonnie Carlson (Zoe Kravitz) in the season one finale — a secret that the Monterey Five are now keeping and one that will drive the entire upcoming season.

As it turns out, Mary Louise was written with only one actress in mind to play her: Meryl Streep.

“When I was sort of agonizing over whether or not I should do it, it was actually my sister who said to me, ‘Only do it if it would be fun, and why not create a role for your favorite actor?’ And that’s when I came up with this role for Meryl Streep, to be Perry’s mother. And it was really from there that it all came together, because you bring this new character in and the storylines just emerge,” says Moriarty, who spoke with THR at the Big Little Lies season two premiere at New York City’s Jazz at Lincoln Center on Wednesday. She says season two is about answering “what really would happen next?”

During a cast panel earlier that day, Kidman said she and Witherspoon laughed when Moriarty told them to get Streep for the part. But then, to their surprise, Streep didn’t even read the script before agreeing to sign on for the role.

“[My agent] said, ‘There’s a part that they wrote with you in mind because they called her Mary Louise’ — Mary Louise is my actual legal name,” said Streep while appearing with her co-stars at the Wing‘s SoHo location. “I said, ‘Yeah, I’ll do it.’ He said, ‘Don’t you want to read it?’ I said, ‘No.’ It was the greatest thing on TV. It really was, that first season.” None of the executive producers knew that Mary Louise was Streep’s given name. “That was Liane’s telepathic message to Meryl,” added Kidman.

“In the beginning, I thought it was my secret, hidden joke,” Moriarty explains to THR. “I thought other people would know that it was her name, but it wasn’t until ages after I submitted it that I finally got a text from Per [Saari], one of the producers, saying, ‘Ah, I see. Very clever!’ And she just said yes. I don’t know how she feels about the character being named Mary Louise, but it was wonderful getting Meryl. I would have been sad to have had someone else play her.” 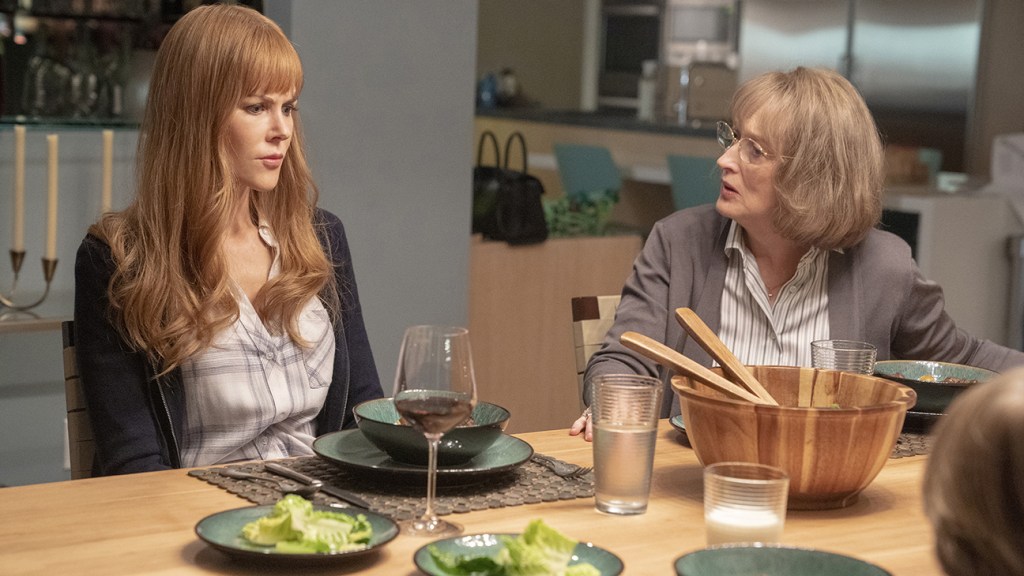 Since Moriarty was busy working on her next novel in Sydney during the production of season two, she had yet to meet Streep in person when arriving at the premiere event. But seeing how the Oscar-winning actress brought Mary Louse to life onscreen was a gift. “I’m just amazed that she makes somebody who wasn’t real before become a reality,” Moriarty says. “With her little gestures, there’s a person somehow. I hadn’t thought before about the craft of acting and how strong it really is.”

As an outsider coming in to dig for answers, Streep’s character poses the biggest threat to the Monterey Five, who are made up of her daughter-in-law, Celeste Wright (Kidman), along with Madeline Martha Mackenzie (Witherspoon), Jane Chapman (Shailene Woodley), Renata Klein (Laura Dern) and Bonnie (Kravitz). But beyond the murder mystery, Mary Louise is also a grieving mother who will have to reconcile with her son’s sins. The first season exposed Perry’s domestic abuse against Celeste and identified him as Jane’s rapist. The second season will delve deeper into the trauma he has left in his wake.

“One of the things I love about the first season — and I’ve seen three of the second,” said Streep during the panel, “is that [Big Little Lies] isn’t afraid of the mess and the really harsh contradictions in mothering, in parenting and how in your life, before you have children, you are warring with yourself. But then, you’re warring with yourself and what you hope for your children, and what you see them struggling with and the challenge of trying to help them, but not clear a path; trying to make things possible, but not give them stuff.”

She continued, “All that’s in [season two] and the special myopia that motherhood imposes on you, where you sometimes only see your own child’s importance in the world and what you want for them — that’s rife in this. Even in playing the character that I play, where my son is dead, just going into the dark place of imagining that — your feeling of protecting him even though he is gone is still there. So, motherhood never stops.”

Mary Louise’s search for answers will be a through line for the season, and Kelley says that looking at the “Monterey Five plus one” provided more stories to tell. He, too, praised Streep for what she did with the character.

“Meryl and I had various conversations — and I think we were pretty much on the same page from the beginning about who Mary Louise was — but Meryl brings a pretty gifted level of nuance that is just extraordinary,” executive producer, creator and writer Kelley tells THR of Streep, who subtly alters her physical appearance with glasses, a wig and fake teeth. “For example, there are notes and hues sometimes that I might want to be bolder with so the audience is sure to pick up on them, and Meryl will look me in the eye and say, ‘Let’s tuck it under. I can give you that.’ And she does. And it’s a very, very complicated, nuanced character, and I’m grateful for her performance.”