Twenty-five years ago today, NBC debuted a groundbreaking series starring an ensemble cast that helped shape the current TV landscape. That show, of course, is medical drama ER, which debuted the same season as Friends and ran for an impressive 15 seasons.

Based on a screenplay by Jurassic Park author Michael Crichton about his own experiences as a young medical student working in an emergency room, the series was created by John Wells (Shameless, Animal Kingdom). And while cast and crew cycled through the show throughout that decade and a half, few were involved for the series’ entire run.

Casting director John Levey worked on the show from its pilot through the series finale, hand-picking talent for all 331 episodes — each iteration of the staff working the emergency room at Chicago’s fictional County General Hospital, and every patient, many of whom went on to become stars in their own right.

“It’s really just an incredible confluence of good luck and wonderful collaborative efforts,” Levey told The Hollywood Reporter. “We went through so many different showrunners, although John was there all the time. But [there were] people who ran the directors’ element or who were instrumental in the writers room, and then of course the cast changed and evolved. We didn’t do what lots of other franchises did, where you did a whole new version — ER Toledo or ER Boston — we just kept rejuvenating ER Chicago with new and interesting people. The medicine stayed the star, but the characters were new and different as the years went on. So it remained incredibly exciting. And it was a fantastic example of what excellence and collaboration and community can produce. John runs a fantastic ship. And it was fun and exciting from day one through day two million.”

The pilot introduced new ER doctor John Carter (Noah Wyle) on his first day of work at County General and the senior staffers that made the emergency room run smoothly: residents Mark Greene (Anthony Edwards) and Susan Lewis (Sherry Stringfield), handsome pediatrician Doug Ross (George Clooney), hotshot surgeon Peter Benton (Eriq La Salle) and nurse Carol Hathaway (Julianna Margulies), who was famously supposed to die in the premiere but was written back in because of the character’s popularity during audience testing.

Below, Levey tells THR about casting the original ensemble, plus some of his favorite guest-star discoveries throughout the years, in honor of the series’ 25th anniversary. 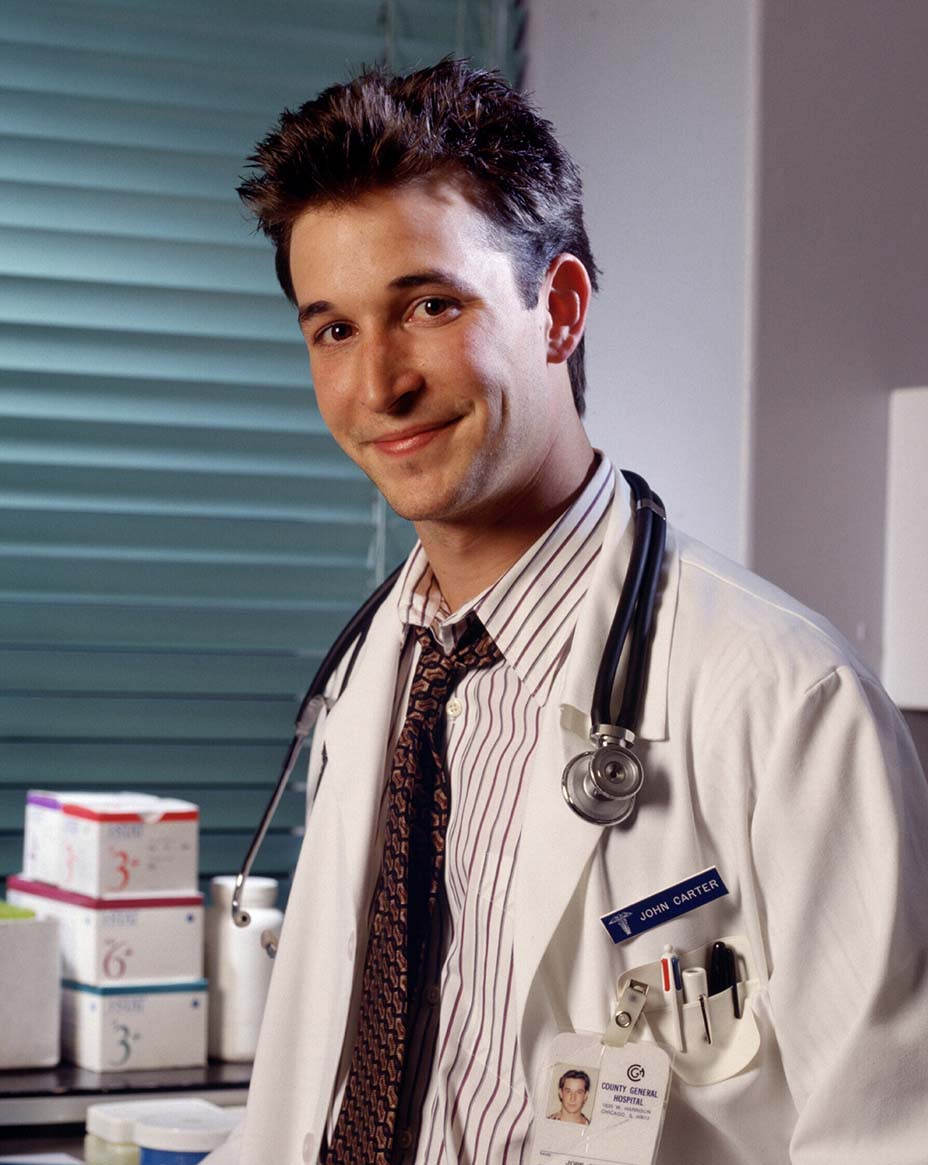 Young medical student Carter’s first day in the ER is the audience’s way into the series. While Wyle’s agent had pitched him for the series multiple times, it took a while before Levey relented and brought him in to read for the role.

“Noah had a couple of films that he had completed, but neither of them had been released. And if you look back at the pilot, you see exactly how young Noah seemed and was. It was Doogie Howser plus five,” Levey said. “I brought him into a producer session, and funny enough, it was the one producer session that Dr. Crichton attended, and Noah did a fantastic thing. There was a dialogue scene — which he read, of course — but there was also another scene where the young Dr. Carter screws up taking blood from a patient, and it was physical comedy. Noah tied off my bicep with some kind of a wrap, and then, using a pencil, he pretended to draw blood from me. Crichton was laughing his head off. It was a brave and exciting audition, and the rest is history.”

Another actor who came close to landing the role? “I recently had lunch with Noah, and he told me that he was once sitting on an airplane and the seat next to him was occupied by the actor Raphael Sbarge (Once Upon a Time, Murder in the First), who had tested opposite him for ER. I think he said Raphael said, ‘I’m trying not to hate you.'” 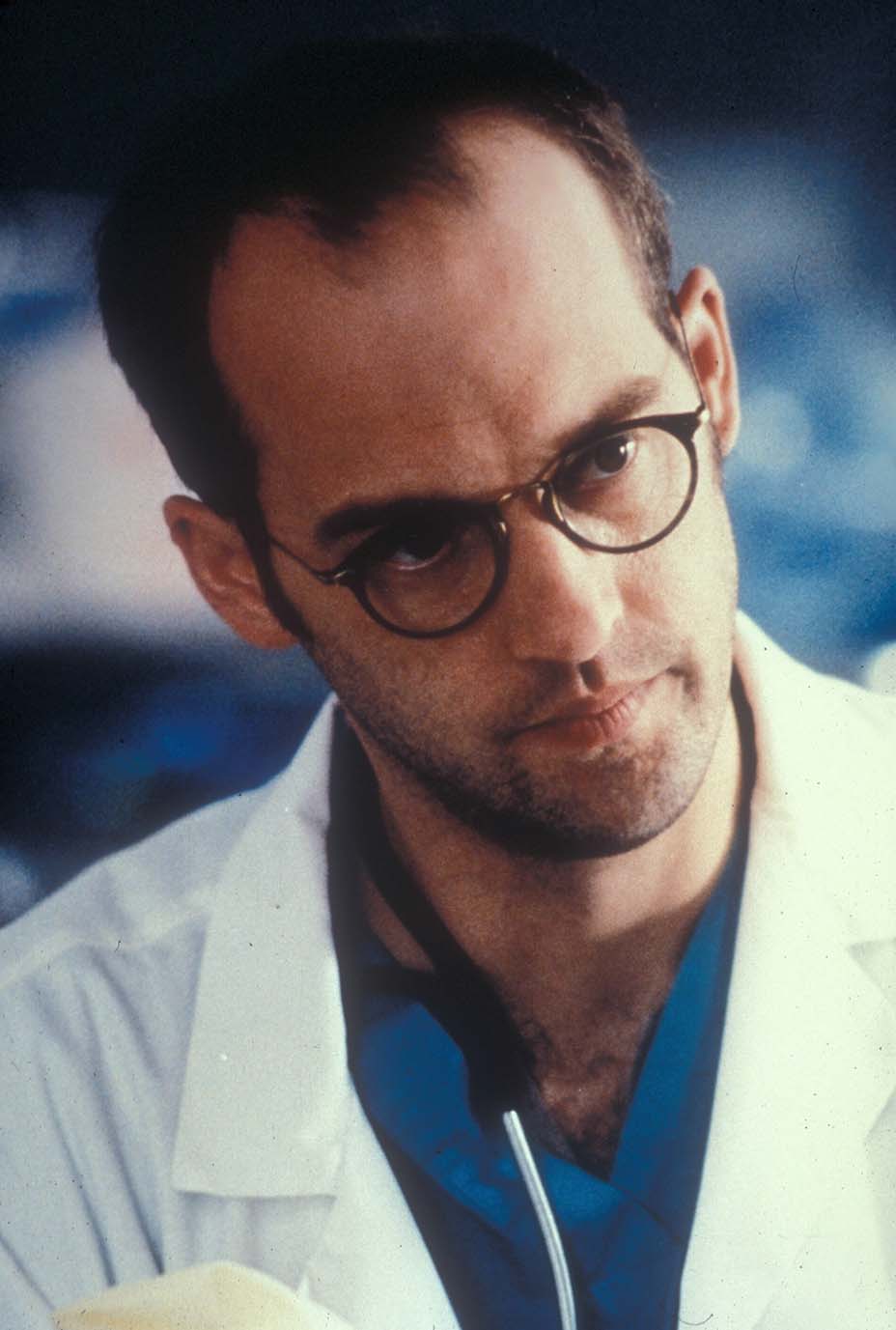 When it came time to cast reliable resident Mark Greene, Levey was sitting at his desk with a pile of headshots when Wells happened to walk by.

“Anthony was a certain kind of young leading man in Top Gun as Goose, and then he was a wholly different-looking guy by the time he was submitted for ER. John walked over to the pile and picked up the picture and said, ‘Oh, that’s a good idea! Get him in the first day.’ And we did, and he ended up casting [him]. I remember distinctly after we saw the cut of the pilot [legendary Warner Bros. casting director] Barbara Miller jokingly hollering to her assistant, ‘Get my doctor! Fire him. I’m going to Dr. Greene from now on.’ I think that’s how a lot of us felt — that Anthony was really the soul of the show, and that he had such a trustworthy quality and [seemed like] such a caring physician. I think one of the keys to the early success was that quality that John saw on the top of the pile.”

In another life, actor Chris Fields could’ve scored the role: “Anthony tested opposite a guy called Chris Fields, who’s here in Los Angeles still and is the artistic director of one of the best theaters, the Echo Theatre Company.” 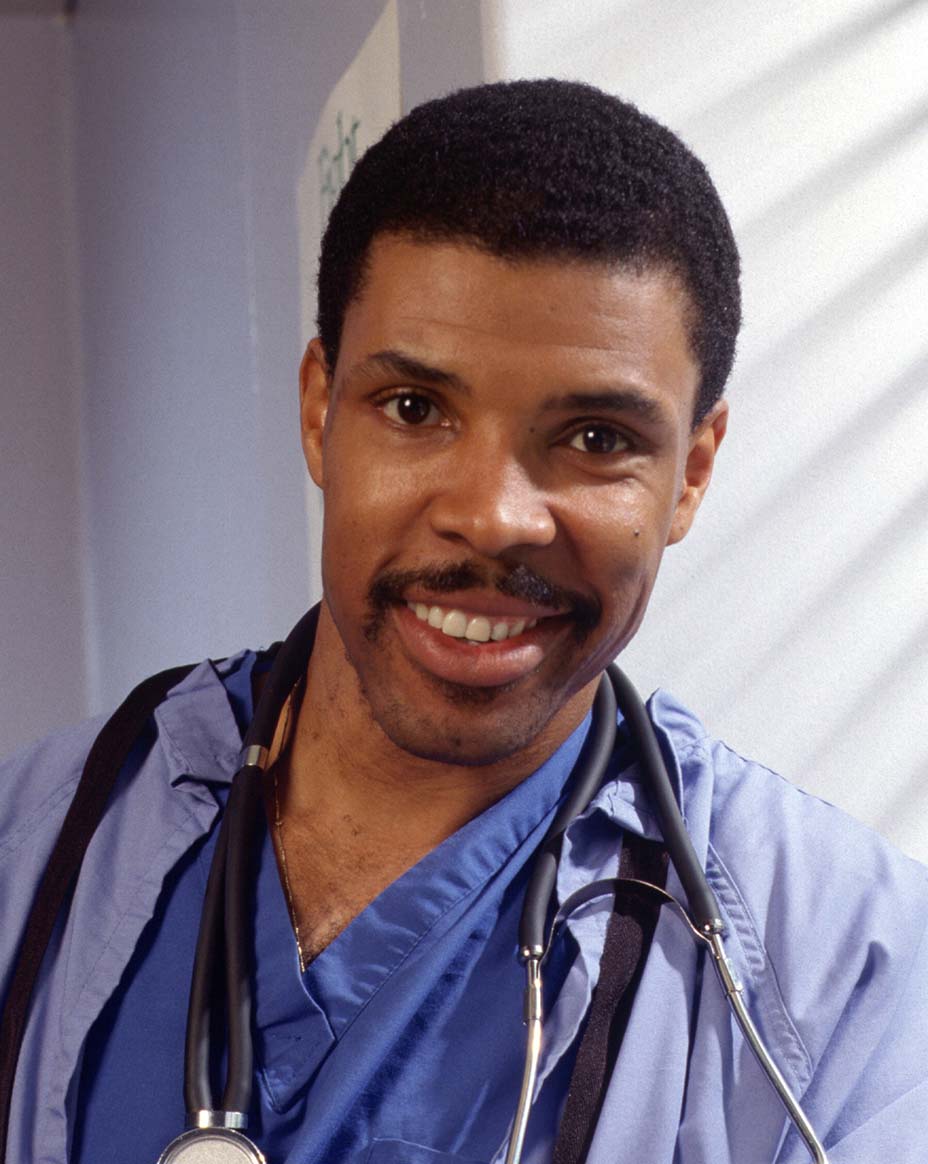 La Salle was recurring on a different medical show at the time, and one of Warner Bros. casting head Miller’s rules was that none of her casting directors could poach actors from each other. So while Levey knew early on that La Salle was perfect for prickly Peter Benton, he kept getting shot down. Finally, though, Miller relented.

“He was the last person cast. In every pilot I’ve done since then, when we’re having trouble with a part, we remind ourselves that Eriq was cast on day three of the shoot,” Levey said. “I remember him lying in the hallway in scrubs. The way Laker basketball players are sort of doing stretching stuff on the floor before the game, he was on the floor in the hallway in scrubs doing his stretching. And he came in and read and read the hell out of it. And I’m happy to say I was right.”

The Benton role was key because of the mentorship the character offered Carter, said Levey. “The relationship that developed between Noah and Eriq was just so, so important to the success of the show. And Eriq is a great, generous guy. At the time of the pilot, he was one of the very first dramatic, African-American, smart series regular players. He took that role very seriously, as he should have. I think some people found him hard to read, or sort of taciturn or something. I always admired him and thought he was doing a great job.”

Also up for the role: Michael Beach, who would go on to recur as the husband of physician assistant Jeannie Boulet and would later star in Wells’ Third Watch. 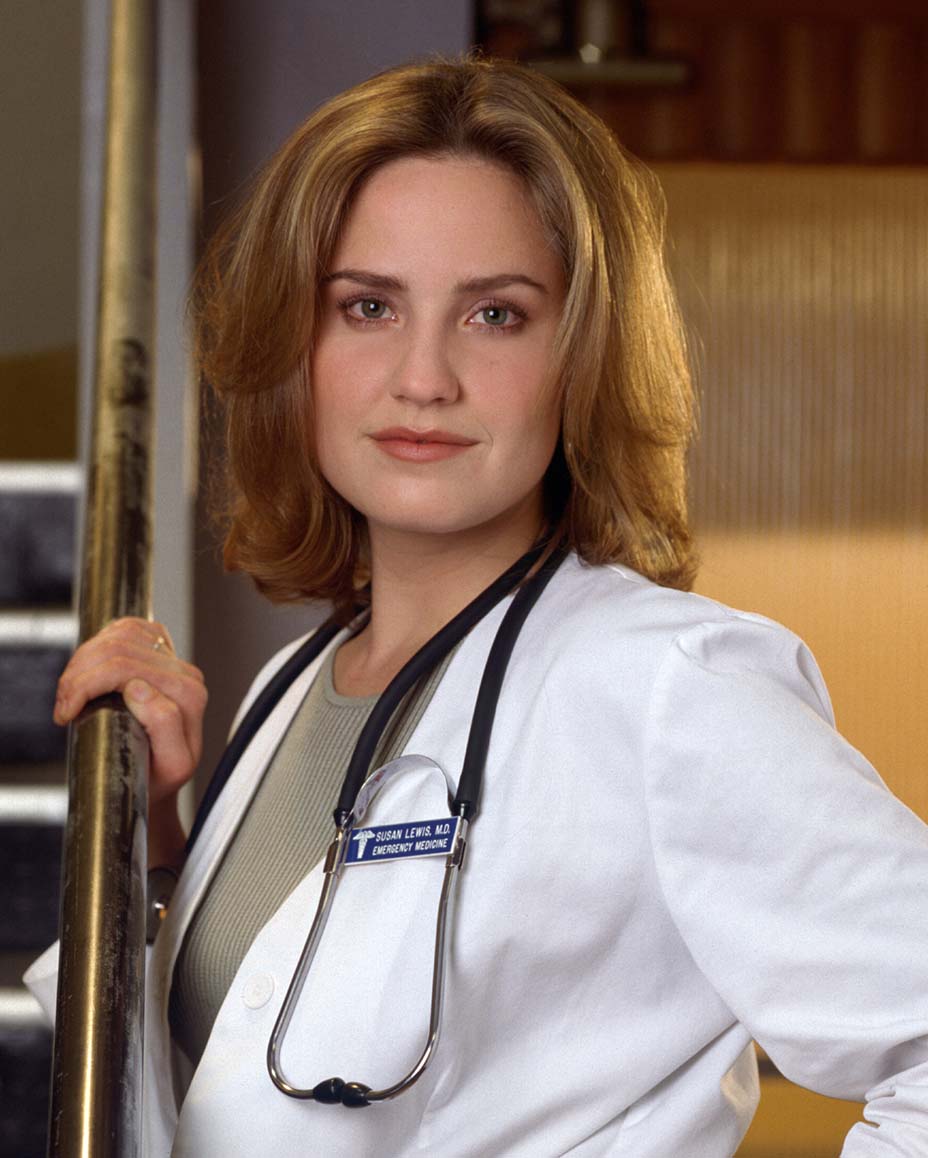 Stringfield’s casting was partially due to a serendipitous encounter with Levey and Wells on an airplane.

“At that time she was on NYPD Blue as a series regular in their first season. She was very unhappy for whatever reason, and she shared that with us on the plane. We got excited about her and read her when we came back,” Levey said. “I remember her scene with the late [Miguel] Ferrer — she had to tell him that he had a cancer diagnosis, and she she said something like, ‘Nothing is certain. Nothing, nothing at all.’ She had a wholesomeness and a lovely ability to make people identify with her and trust her. You would want her or someone like her to give you terrible news. It would be better than someone harsh giving you terrible news.” 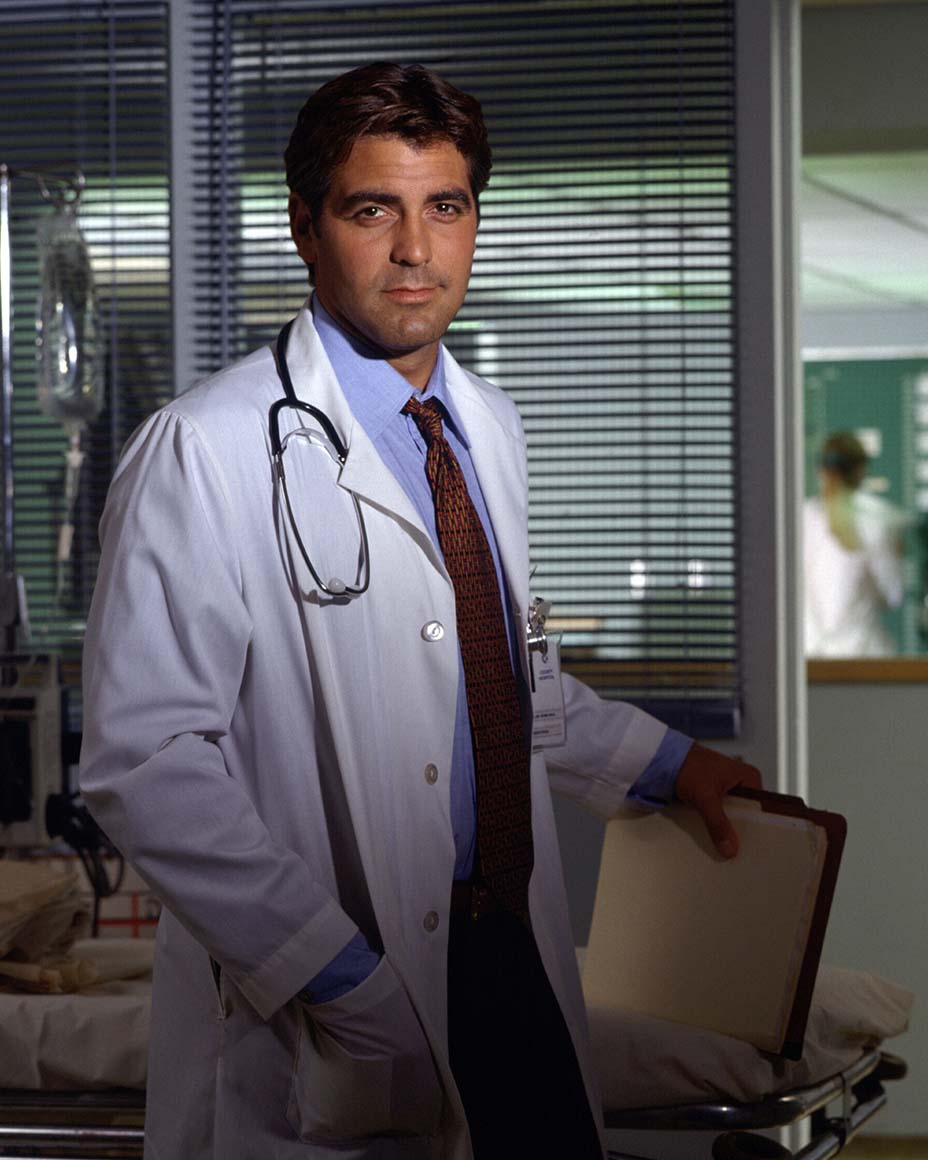 “He was a 35-year-old, handsome leading man with a sense of humor and a sense of vulnerability. But he had also been in seven or eight failed pilots by then. We somehow got him a script,” Levey said. “George so smartly recognized that Doug Ross was his ticket, that it combined everything that he was and turned his deficits into assets, and turned his assets into glorious assets.”

When the actor came in for a meeting with Levey, Wells, and pilot director Rod Holcomb, “he was his incredibly charming, self-effacing self, and we were ecstatic. He told a story in that meeting about the famous Northridge earthquake where he was awakened, as so many of us were, at 4-something in the morning and ran outside and hid with his one of his roommates under a tree with their pet pig. He said something like, ‘Just another Friday night, naked outside at 4 in the morning with a pig.'” 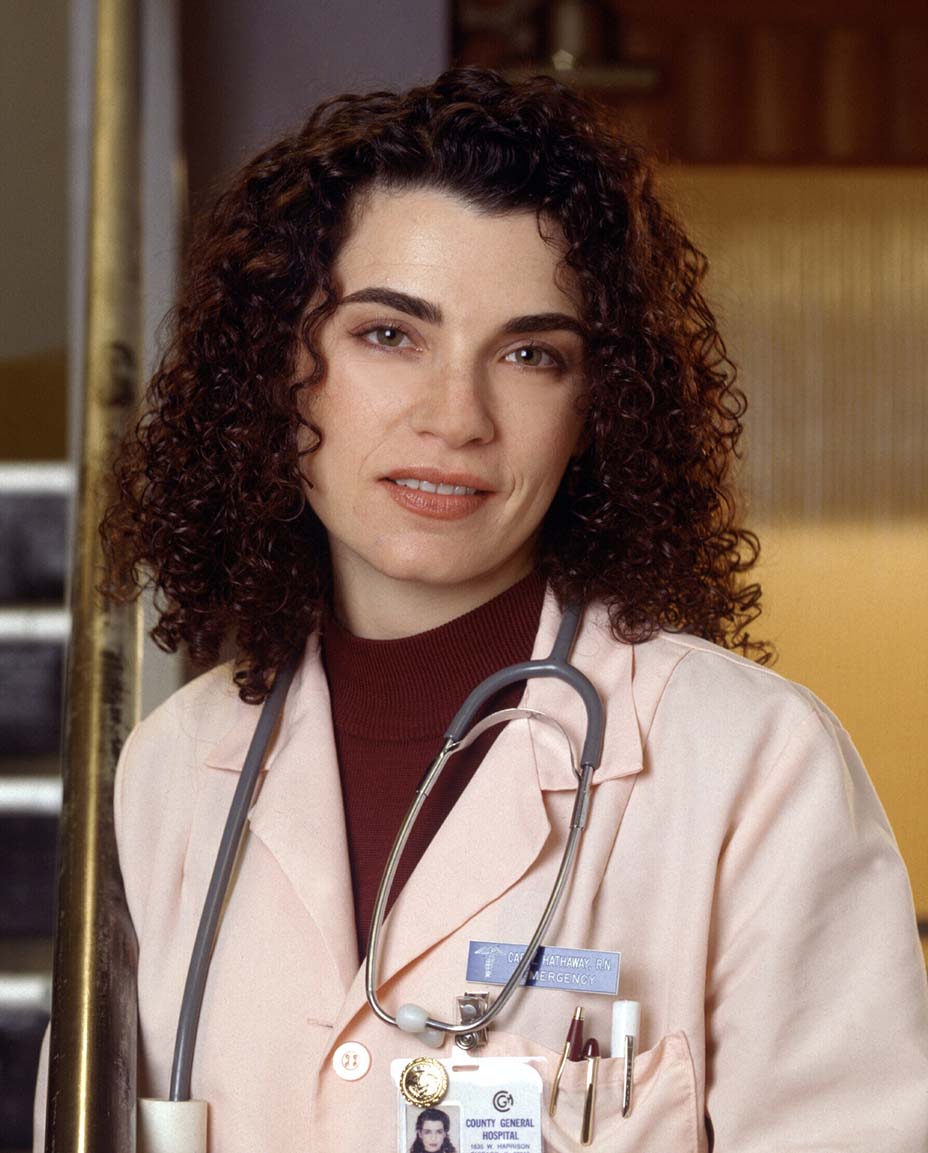 “As important as the relationship between Noah and Eriq’s character was, what developed in the pilot between George and Julianna was the heart of the show, the romance of the show. And in the great tradition of NYPD Blue, someone who was supposed to die in the pilot tested so well that they had a miraculous recovery,” Levey explained. “She had such an empathetic heart. She and Sherry and George and Noah and Anthony and Eriq all were the kind of doctors you wish you had when you were in crisis. I had met Juliana through her agents at Gersh maybe six months before that. I tried to get her on the western The Adventures of Brisco County Jr., and somehow those producers didn’t see it. But Holcomb loved her in the audition. So did John Wells. We cast her as Carol Hathaway, and she’s gone on to have one of the great television careers that any any woman in this generation has had.”

Guest Stars and Other Series Regulars

While naming each major star who once appeared on the show would take a very long time — there are 331 episodes, remember — Levey recalled some of his favorite guest stars over the years.

“Lucy Liu, who had almost no lines, played a pregnant immigrant and squatted in the corner of the room with Clooney and had a couple of scenes, maybe, in that episode, and she was so spectacular playing something very different than who she actually is.”

Another: “Coming out of the Juilliard program I identified Jessica Chastain as someone who I adore. I introduced her to John and she did a one-off on ER that I’m very proud of as well.”

There were also Stanley Tucci, John Leguizamo, Alan Alda and a very young Dakota Fanning, and Sean Hatosy played a patient with multiple personalities before going on to star in Wells’ Southland and Animal Kingdom.

Levey also loved adding Maura Tierney, Laura Innes, Mekhi Phifer, and more to the ER rotation. Overall, he said, “It was a spectacular time in my life. I have lifelong friends from those days, and I’m enormously proud of it.”

Pop TV began a marathon of the series starting with the pilot that began Wednesday, Sept. 18. It will continue every Wednesday and Thursday from 4 p.m. to midnight.