Continue to The Hollywood Reporter SKIP AD
You will be redirected back to your article in seconds
Skip to main content
July 19, 2019 9:00pm
Logo text

[This story contains major spoilers for the finale of Veronica Mars on Hulu.]

In the run-up to Veronica Mars being revived on Hulu, creator Rob Thomas repeatedly emphasized that he wanted to do a more grown-up version of the show, and that he was aiming for “hardcore SoCal noir” in terms of tone.

“This is a detective show,” Thomas wrote on Twitter shortly after the revival was announced.

The eight episodes — which were released Friday on Hulu, a week ahead of schedule, following a surprise announcement at San Diego Comic-Con — deliver on the promises Thomas made in a shockingly big way. The choice Thomas and Co. made in the finale isn’t likely to be popular with a sizable portion of the show’s audience, but it might also set up Veronica Mars for a possible future better than a happy ending would have.

After Veronica (Kristen Bell) and dad Keith (Enrico Colantoni) find the culprit behind a series of copycat bombings in Neptune — fame-seeking true-crime aficionado Penn Epner (Patton Oswalt), who was (mildly) injured in the initial blast that kicked off the case — it seems as though Veronica is headed for a happy ending. Medical issues that have dogged Keith are clearing up, and she has come around to the idea of marrying Logan (Jason Dohring). After a couple of head fakes involving a chance run-in with Logan has with his ex Parker (Julie Gonzalo) and a text that didn’t go through, they actually do tie the knot. 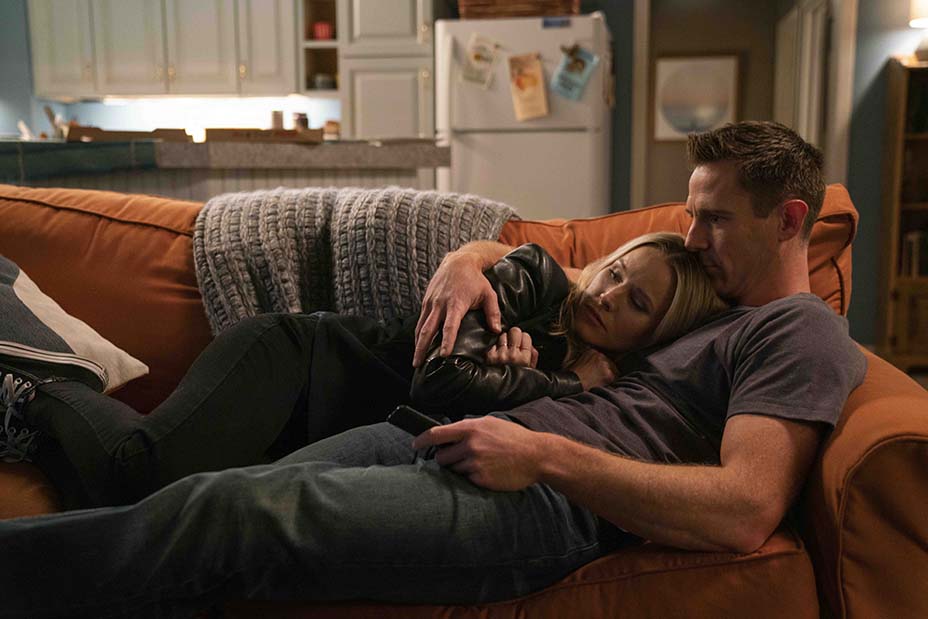 Then Logan goes to move Veronica’s car out of a no-parking zone. Too late, Veronica realizes Penn left one last explosive in her car. Her marriage to Logan lasted all of a couple hours.

Brutal though that ending is, it’s very much in keeping with the noir tradition Thomas is following. The detectives in Raymond Chandler and Ross MacDonald stories often feel like they’ve only achieved partial justice, even when the clients are satisfied, and they rarely end a story happier than they were at the beginning.

Logan’s death also marks a definitive break with the show’s past. Veronica Mars balanced its mystery arcs and its teen/young adult romance deftly in its first three seasons, but a show centered on a woman in her 30s can’t keep hitting those notes convincingly.

“There are a lot of stories about men at crossroads in their lives,” Thomas said at the ATX Television Festival in June. “I was interested in putting Veronica at that crossroads and having her figure out what she wants.”

She did figure it out — only to have her choice taken away, putting her back at a crossroads. The season closes a year after Logan’s death with Veronica driving out of Neptune after visiting Logan’s therapist (Mary McDonnell) and recounting the story to her (in a subtle change from the original series, Veronica’s narration is in the past tense rather than the present tense). She gives Veronica a recording of Logan telling her Veronica is “the toughest human being I’ve ever met. … She always picks herself back up.”

Veronica also tells the therapist that since a true-crime documentary on the bombings aired, Mars Investigations has been getting calls from all over to take cases. She’s headed out of town to do just that.

If Veronica Mars continues — Thomas is open to the idea, though Hulu hasn’t signaled one way or the other yet — it could take on something of an anthology feel with Veronica working cases in new locales (while also allowing for fleeting romantic interests, another staple of detective fiction). The time jump in this season’s final minutes, plus whatever real time might pass between seasons, would give the writers license to put their lead character in other relationships, even if they’d be unlikely to match the intensity of her longtime love.