[Warning: This story contains spoilers for the season seven premiere of HBO’s Game of Thrones, “Dragonstone.”]

Cersei Lannister (Lena Headey) has enemies in every direction, but right now, it’s the one in the East she should fear the most.

The season seven premiere of Game of Thrones featured one of the most anticipated moments in the show’s history: Daenerys Targaryen (Emilia Clarke) making landfall in Westeros. Her arrival comes at the end of the episode, in the form of an extended dialogue-free sequence in which the Mother of Dragons surveys her new home — and, really, her old home — of Dragonstone.

Quick history lesson: Dragonstone was originally settled by the Valyrians, and eventually became the home of the last Valyrians: the Targaryens, lucky enough to evade the mysterious doom that destroyed the Valyrian Freehold. The legendary Aegon the Conqueror used Dragonstone, located just east of King’s Landing, as a base of operations during his takeover of what would soon become known as the Seven Kingdoms. For centuries after the conquest, Dragonstone remained a prized possession for House Targaryen, up until its surrender to House Baratheon during Robert’s Rebellion. In the final days of the Targaryen regime, Dragonstone served as the birthplace for a certain Khaleesi, born in a raging storm — hence one of her many monikers, Daenerys Stormborn. As of season seven, the storm has returned to its rightful home, and not a moment too soon.

Much in the same way that Dragonstone is both a new and old quantity for Daenerys, it’s also a new and old quantity for Game of Thrones as a show. Dragonstone was previously featured in seasons two and three of the HBO juggernaut, albeit in bits and pieces: a war room here, a dining hall there, some sacrificially burned bodies on a dark beach for good measure. For its return in season seven, both the castle and island of Dragonstone experienced a significant makeover in order to lend more gravity to Daenerys‘ homecoming.

“What I’m really fascinated by is the psychology of space,” production designer Deborah Riley tells The Hollywood Reporter about the work that went into bringing Dragonstone to life. “As the art department, I like us to try to imagine what it would be like to be that character walking into that space and scene, and have the set somehow reflect those emotions. For Daenerys, who has been wandering for so long, to walk into that very powerful space, hopefully it’s something where as an audience you can imagine what it might be like for her to go home.” 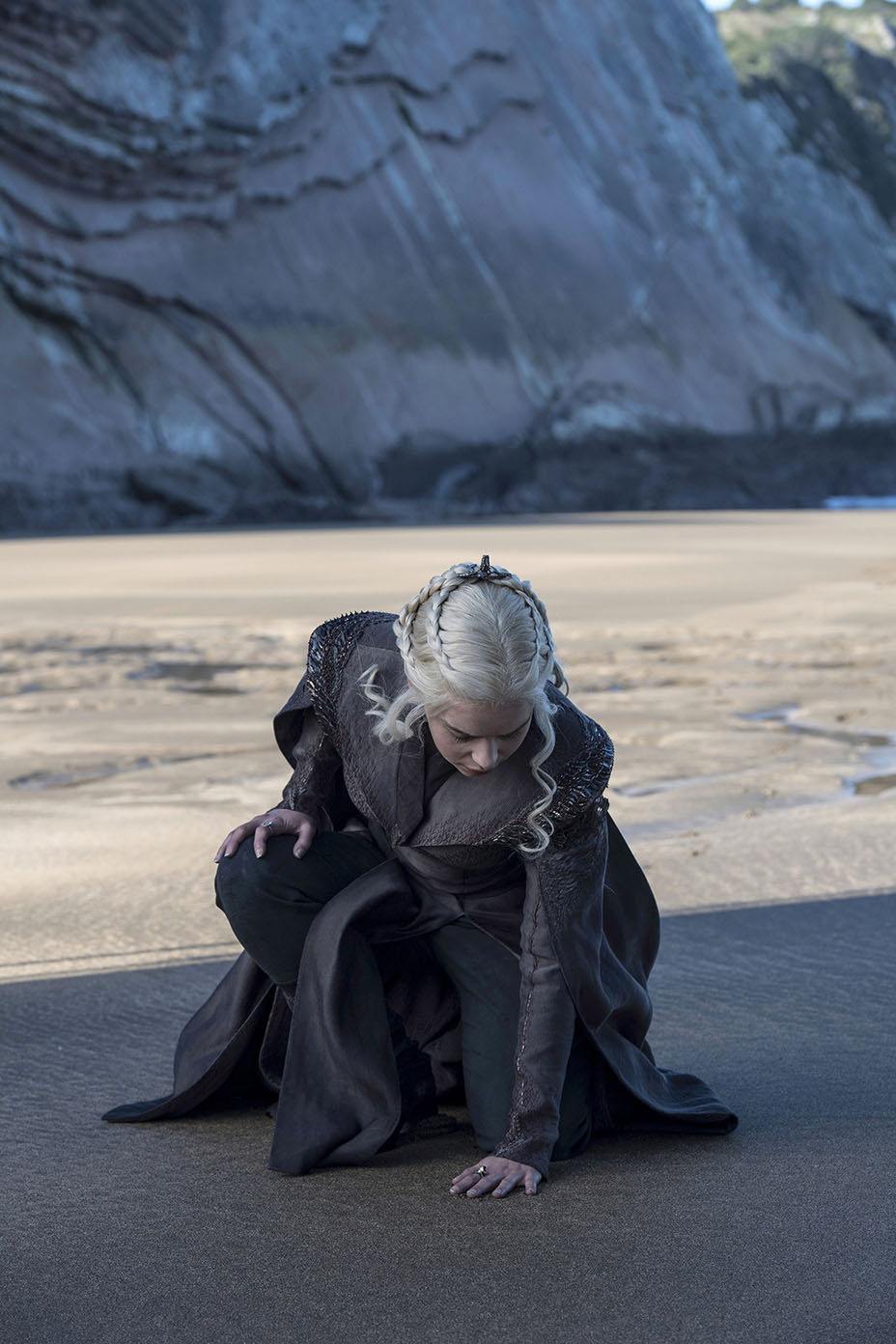 In order to understand what it would feel like for Daenerys to return home, Riley wanted to make sure they found a location that matched the magnitude of what the Dragon Queen would be setting her eyes on. They found just the thing in Zumaia, a small town in the Basque Country region of northern Spain. It’s best known for its awe-inspiring beach and the unusual rock strata unique to the region.

“Geologists from all over the world will come and study it,” says Riley. “There’s so much power and strength in the very structure of the rock, so it felt like an appropriate place to house Dragonstone.”

Riley and her team used the Zumaia rock formations to inspire the Dragonstone sets they subsequently built on soundstages in Belfast, including the breathtaking audience chamber located inside the castle. Riley wanted to stay true to Dragonstone’s cavernous aesthetic established during the days of Stannis Baratheon (Stephen Dillane), while also adding a more regal quality that’s true to Dany’s ancestry.

“I wanted to marry the two ideas,” she explains. “With the audience chamber, I wanted to create a space that was almost standing on its toes, so that it came out of the cave. Then you come into the audience chamber proper, which is this big, soaring, cathedral-like place with all of the power and strength you would want a Targaryen space to have.”

The idea extended to the great throne in the audience chamber, which went unnamed by the production. “Whenever we talk about the Iron Throne, we talk about the Iron Throne,” says Riley. “But we didn’t have a particular name for the Dragonstone throne.” Even without a name, it’s an impressive throne by all accounts, arguably even more eye-catching than the coveted King’s Landing seat. Riley wanted Dragonstone’s throne to be “attached to the earth,” as if it was birthed by the powerful material pulsing throughout the island.

“It occurred to me that the idea of the castle being built on this massive, strong and powerful strata, the throne itself should also be of that same strata,” says Riley. “It’s like that power and strength is built into the very DNA of the building.”

The power and strength baked into Dragonstone’s design also exists within the story now, too, given what Samwell Tarly (John Bradley) discovered near the end of the premiere: the castle sits atop a great mine of dragonglass, an invaluable resource in the war against the White Walkers. In light of that revelation, it’s easy to see why Jon Snow (Kit Harington) will take an interest in Daenerys: Her new stronghold is literally a weapon, one that’s utterly crucial in the great war to come.

“That’s a really good way of putting it,” says Riley, remarking on how the ethereal and almost alien quality of Dragonstone reflects its status as a weapon. “There’s really nowhere else you can compare with Dragonstone. Even from a real-world perspective, that geology is incredibly rare. It’s only an eight-kilometer stretch there [in Zumaia] … it was one of those happy things we came across that we could use in so many ways to show the significance of Dragonstone, and its importance to the overall story. When we go inside the Dragonstone caves and you see the dragonglass, it’s baked into the veins of that rock. The castle is sitting on such a powerful thing.” 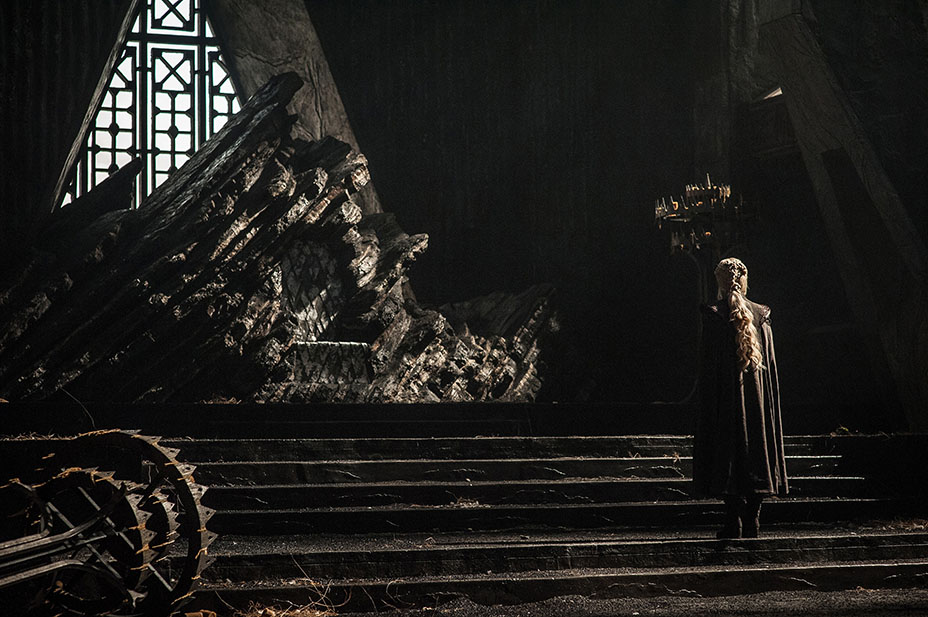 At the season seven world premiere, Game of Thrones showrunners David Benioff and Dan Weiss praised Riley and the production designers for their work on the season, including one of the premiere episode’s sets, which they described as among the very best in the show’s run. Although they didn’t call out Dragonstone by name, the unforgettable location and its unique interior design certainly fuel the argument that Dany’s new home is one of the most impressive sights ever seen on Thrones. Finding Zumaia and using the area as inspiration to build the Dragonstone sets was challenging enough on its own, but Riley says the difficulty factor was increased all the more given everything else that needed to be built for the expansive seventh season — including Silence, the great warship of Euron Greyjoy (Pilou Asbaek), which was built at the same time as the Dragonstone sets.

“Time was the thing we struggled with in season seven. We had to build so many things, and we had to build them all at once,” says Riley. “You have to divide and do as much as you can, with as many of your team as you can, and be as effective as possible.”

“Hopefully it’s filled with a lot of emotions for her,” says Riley. “It’s something that we can do as the art department. We can help with the storytelling and help convey that sense of character.”