Of all the empowering storylines she has done in Grey’s Anatomy‘s record 332 episodes, portraying a woman who has lost the love of her life — and her survival — has been the one that stands out the most for star Ellen Pompeo.

And that journey has been heating up of late in season 15 of the ABC series which, last week, snapped ER‘s record as primetime’s longest-running medical drama. This season, Pompeo’s Meredith has re-entered the dating world as she looks for love some four seasons after the shocking death of her “person” in Patrick Dempsey’s Derek “McDreamy” Shepherd. After a series of bad dates (sorry, Josh Radnor) and romances that didn’t seem quite right (apologies, Martin Henderson), Meredith and surgical resident Andrew DeLuca (star Giacomo Gianniotti) have slowly started telling their inner circle that they’re romantically involved.

Showrunner Krista Vernoff, Pompeo, 49, Gianniotti, 29, are all equally excited about flipping the script on Meredith and Derek’s relationship that served as the cornerstone of Grey’s Anatomy when “McDreamy” (and, later, Eric Dane’s “McSteamy”) became a pop culture phenomenon a decade and a half ago.

“All the time on television you see older men with younger women and it is so common that it isn’t even a thing that people notice,” Vernoff told The Hollywood Reporter during a set visit for the record-breaking episode. “It was not a conversation that Derek was so much older than Meredith. It was just that he was the senior surgeon. The age difference wasn’t a conversation. I find it delightful to have the opportunity to flip that script. And when people buck against their age difference, my response is to say, ‘So? Let’s not fall into weird stereotypes.’ People are people — and people fall in love.” 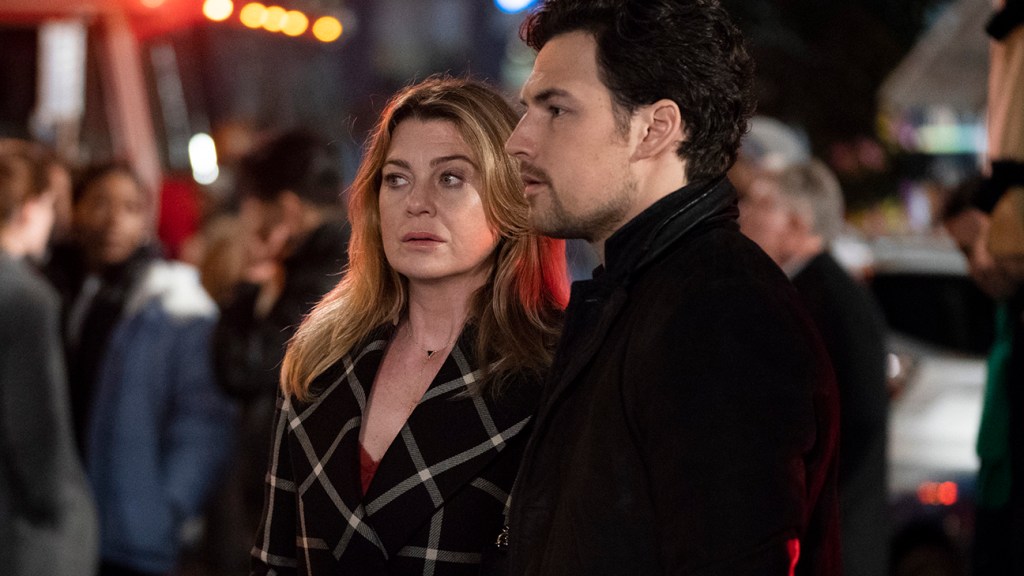 In season one, Meredith was an intern at then-Seattle Grace who, after a one-night stand, wound up working — and falling in love with — her attending, Derek. Now, Meredith is head of general surgery and a member of the board of directors at Grey Sloan Memorial while Andrew is a surgical resident. Viewers, naturally, are fiercely protective of Meredith — whose half-sister, Maggie, previously dated Andrew.

“The age difference between Meredith and Andrew is something that we’re trying not to talk about because we’ve been preaching that love is love — and that includes age. It doesn’t make sense for people to say, ‘Love is not love because he’s too young’ and compartmentalize love,” says Gianniotti, whose fiancée is nine years his senior.

For Pompeo, who last year set her own TV record as the highest-paid actress on a primetime drama series, age doesn’t even enter her mind when she thinks of herself or Meredith in the storyline with Andrew.

'Grey's Anatomy' Showrunner on Where the "Season of Love" Goes Next

“I have a hard time even seeing myself as an older woman! I still feel like I’m 25 — although I’m so much better now! It’s like, ‘Wait, I’m the older woman?! When did that happen?!” Pompeo says with a hearty laugh. “But it’s so true. And there’s still plenty of older guys that are with much younger women and no one says anything. But hopefully we’re past people saying that about an older woman with a younger man. Hopefully people don’t even clock that because men have been doing it forever and continue to do it and no one bats an eye.”

As with many of Grey’s Anatomy‘s topical storylines and romantic pairings, Vernoff hopes Meredith and Andrew’s romance will help viewers in similar relationships feel seen. “There are people who are going to feel witnessed in this story,” she says.

The showrunner, who spent the first seven seasons on Grey’s before being hand-picked by Shonda Rhimes to take over the series after the creator’s move to Netflix, is keenly aware of the trepidation that comes with writing a new relationship for one of TV’s most beloved characters — who also happens to be the face of a $4 billion franchise.

“What I realize as I write Meredith and Andrew is that I can have all the trepidation or fear or nerves that I want to have but any time you write for Ellen Pompeo and someone else the chemistry is different. The magic is different. It comes alive in a different way,” Vernoff says. “You can do what you can do to make sure it’s new, unique and fresh but what’s fresh is the combination of actors and the magic that comes from that. And if it’s too close to something we’ve done before, Ellen calls me and we fix it!” 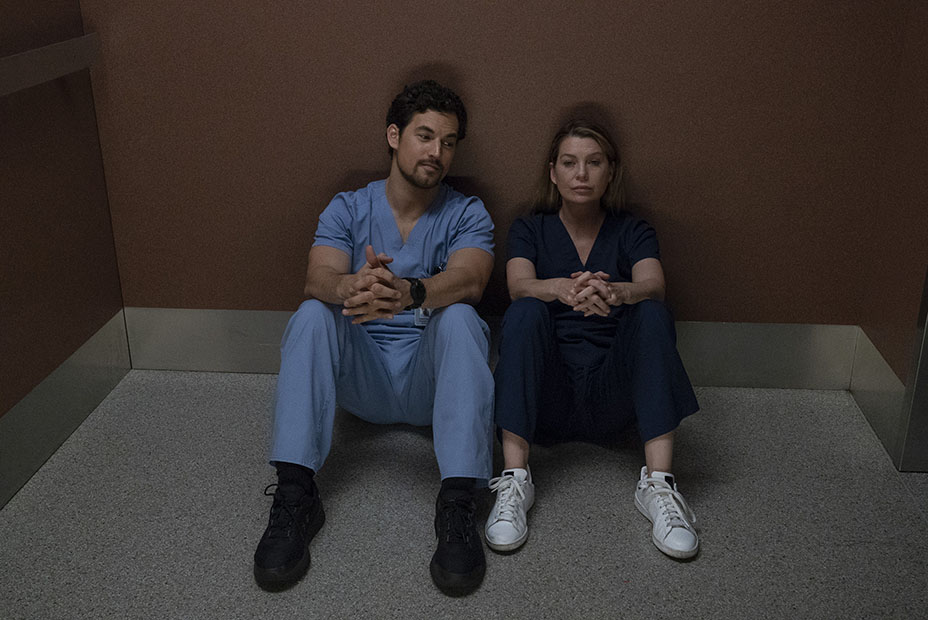 That line of thinking is a prime reason why Meredith and Andrew shared a pivotal scene in the hospital’s famed elevator of love that became so iconic during Grey’s Anatomy‘s McDreamy era. The scene — in which the duo was trapped in the elevator — featured a heartfelt conversation in which Andrew revealed his father (played by Lorenzo Caccialanza), too, was a famous surgeon in Italy but, unlike Meredith’s award-winning surgeon mother, his dad killed a number of patients during a “manic phase.”

Gianniotti, meanwhile, is having fun working with Pompeo, as the duo formed a friendship after he joined Grey’s in 2015. “When this was proposed to us, we both thought, ‘We just get to hang out and laugh more!'” he says. “I get a lot of people asking if I feel like I’m filling Derek’s shoes or in his shadow and I can’t say I feel any of that. … The biggest thing that Ellen and I have fought for most is that this romance and the unfolding of it be as different by design so the audience doesn’t feel like they’re reliving someone else going through the same falling in love steps.”

The romance comes after Pompeo was critical about how fast top executives wanted to bring in a new love interest for Meredith after Derek’s death. “I couldn’t believe how fast the studio and network felt like they had to get a penis in there,” she told The Hollywood Reporter in a January 2018 cover story. Now, the actress — who also has a producing credit on both Grey’s and spinoff Station 19 — is excited to see Vernoff and company write for Gianniotti and expand Meredith’s world.

“We brought a couple other people in and it didn’t seem to work and the story has to keep moving,” she says of Meredith’s love life. “Giacomo is someone who we know, love and adore — and he’s so handsome! — and it’s time for him to step up. He is an incredible actor and he has such a nice presence and I’m really looking forward to building up his character more and letting him have his moment because I really think he deserves it. I want Krista to write for him more and I’m excited to see him take off and grow as an actor and get a chance to show what he can do.”

As for the age difference between their characters, Gianniotti hopes viewers find Andrew and Meredith’s romance empowering.

“These things are becoming more common and acceptable and I’m happy that I get to be a part of telling that story,” he says. “It’s about showing the world that it’s normal, that it can be sexy and empowering for someone who is in an older position to be in that and that there’s not this weird shame or stigma that they have to feel about it. I’m hoping it can empower people and I hope it can be sexy and fun for the viewers to see this romance unfold.”