Skip to main content
June 2, 2017 4:30pm
Logo text
When I’m Dying Up Here makes its debut Sunday night on Showtime, it will give viewers a very different look at stand-up comedy than they may be used to. Set on Hollywood’s Sunset Strip in the 1970s, the series showcases the golden age of stand-up, an era in which countless comedians flocked to Los Angeles to perform in clubs for free in hopes of landing a spot on The Tonight Show.
Given that it was such an interesting time in comedy, and entertainment as a whole, great care was put into making sure the show got the details right. While the book the series is based on, written by William Knoedelseder, did a lot of the heavy-lifting when it came to telling the story, there was also one other resource for everyone to use: Jim Carrey, who serves as an executive producer.
The actor and comedian, who got his start on the Sunset Strip, was an up-and-comer in the late ‘70s and early ‘80s and was very open about sharing his experiences on the scene with the writers and castmembers.

“Jim lent his voice and his stories to the development of the rest of the show,” star Andrew Santino tells The Hollywood Reporter. His co-star, Erik Griffin, shared that sentiment. “He was integral to making the show because he lived that time and he tells the stories of that time,” he says. “A lot of the things that happened in the show happened to him or he witnessed it.”
The stories were especially useful to actor Clark Duke, who plays one of the newcomers to the scene. “Stuff like living in the closet, that’s based on him,” he says. “The stuff me and [Michael] Angarano do, I think, it’s based on a lot of Jim’s experience out here. He’s been through some shit, man.”
“We would always look forward to what he would say out of his mouth next because it could be an idea, it could be a character choice,” star RJ Cyler remembers. “It’s like walking around with a crayon box you can just pick out a color from.” 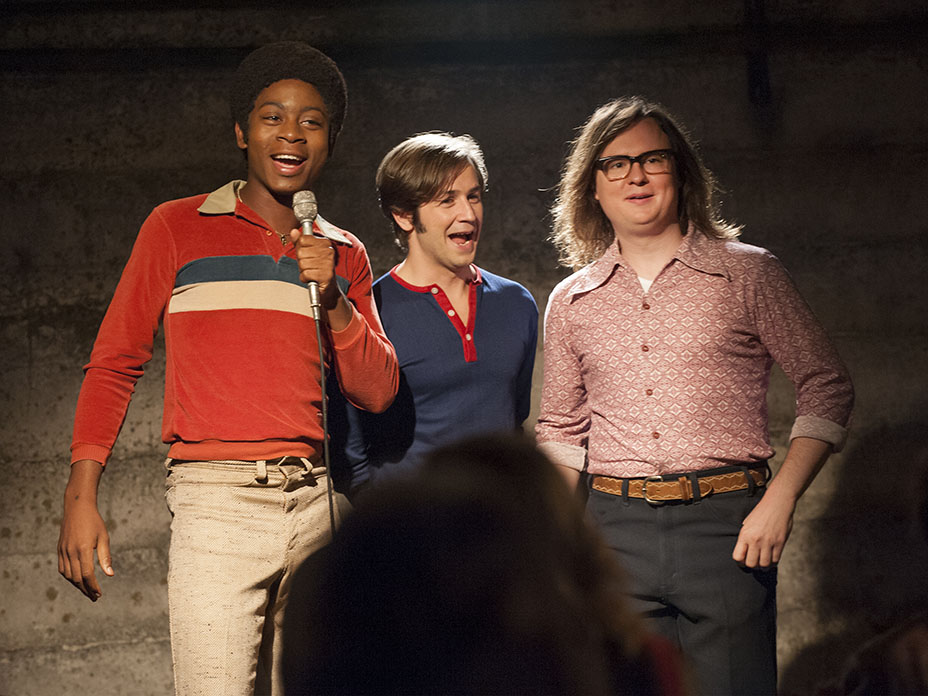 As executive producer Michael Aguilar explains, though, Carrey’s influence is about more than memories of when he was struggling to make ends meet while waiting for his shot at fame. There was also a wealth of information in his experiences with other comedians.
“When you can bring an authenticity to it and you can bring someone who understands the pain and the anger and the suffering that these guys go through, it’s hard to get there without someone who’s like, ‘This is what we did. This is the knife fight we got into in the alley over a stolen joke. This is me and Sam Kinison racing down Sunset Strip. This is the thing Sam said to me that gutted me,'” he explains. “Those are stories that, unless you’re there, I don’t know how you make those up. I don’t know how you make up a story where you find yourself alone with Richard Pryor in a parking lot at two in the morning, having a conversation about ‘I don’t know if I did this right.’ It’s those mind blowing moments.”
It’s clear from the cast and crew that Carrey’s involvement went far beyond the standard executive producer title. “He’s instrumental in getting anything done,” Santino says.
I’m Dying Up Here premieres Sunday at 10 p.m. ET/PT on Showtime.