It was an early Monday morning, Sept. 24, and Martha MacCallum had just climbed into the back seat of a black sedan idling in her driveway. As the driver pulled out to begin the 40-minute trip from suburban New Jersey to the Fox News offices in Manhattan, an email landed in MacCallum’s inbox. The White House communications office was offering her the only interview with Supreme Court nominee Brett Kavanaugh, who for 10 days had been buffeted by accusations of sexual assault. She would need to come to Washington that day, with the exact time and location for the interview still being worked out.

“We went straight there,” recalls MacCallum, who spent the 3½-hour drive crafting questions on her iPhone notes app. “It’s the kind of thing you would like to have more time for, but on the other hand, sometimes I think it’s better when you don’t,” she says. “And it was pretty clear to me what needed to be asked.”

In a conference room in the Madison Hotel in downtown D.C., she pressed Kavanaugh, wife Ashley by his side, on his high school and college drinking, on when he lost his virginity, on whether he had been a participant in gang rape. She repeatedly asked if he was receptive to an FBI inquiry. And he repeatedly obfuscated, offering, “I just want a fair process.” After 24 minutes, it was over — no chitchat, no goodbyes. “They got up and left,” MacCallum recalls. “I don’t blame them.”

The interview, which aired at 7 p.m. ET on The Story With Martha MacCallum, drew 3.6 million viewers, easily cable news’ most watched program of the night and MacCallum’s best tune-in since she moved into that time slot in January 2017. It also earned MacCallum, 54, near-universal praise — even from left-leaning critics expecting only softballs from a Fox News anchor for President Trump’s nominee.

The network’s news anchors have always toiled in the shadow of their more famous (and infamous) colleagues, including top-rated Sean Hannity, on the opinion side of Rupert Murdoch’s cable news juggernaut. But amid raging culture wars and a deepening political divide — with Fox News tagged by critics as “state-run TV” — 2018 is an especially delicate time to practice journalism there. MacCallum pushes back on this narrative: “We have a lot of different voices,” she says. “Anyone who treats it as a monolithic voice is clearly not watching.”

That may have been an easier argument to make in the days of Bill O’Reilly’s everyman populism and before Laura Ingraham characterized child detention centers on the southern border as “summer camps.” MacCallum’s take: “I guess I would say, does it make it more difficult for the news reporters at NBC because they work on the same network as Rachel Maddow?” she asks. “We all live in the bubble, to some extent, of the networks that we work at. But I expect people to respect that there are those of us who are working on news programming and work as reporters and try to dig into the story.”

MacCallum always had an affinity for the story; she recalls watching the Watergate hearings at age 9 at the behest of her older sister, Jane. “I remember John Dean sitting there with his glasses and his wife Maureen behind him,” she says. “I remember President Nixon walking up the stairs to the plane and giving the peace signs. Even though I couldn’t understand the ins and outs of what was happening, it was really high drama to me.”

But her early aspirations were to be an actor and director. After graduating from St. Lawrence University, she studied for two years at New York’s Circle in the Square Theatre School, waiting tables to pay the rent. “I’m sort of nerdy, I liked Shakespeare and Chekhov and the classics,” she says. “I played Viola in Twelfth Night.” 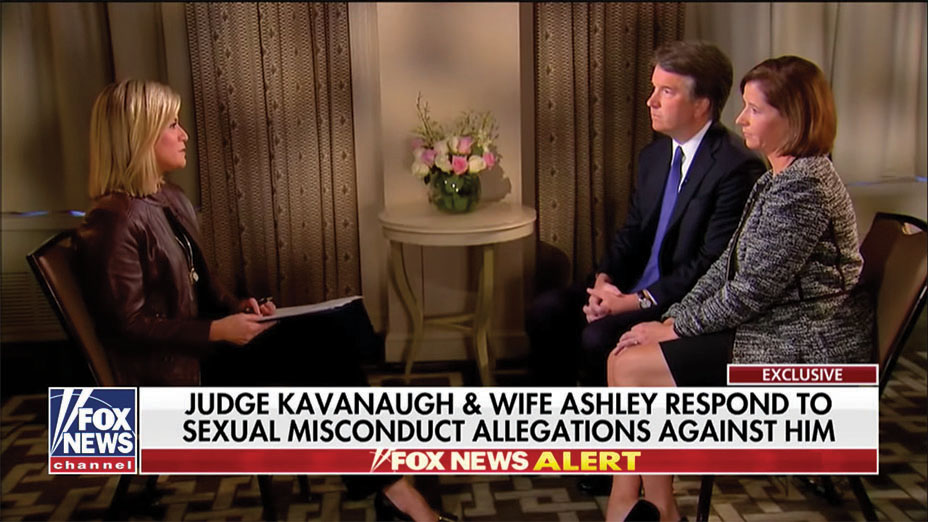 What made her give it up? “Failure mostly,” she responds with a laugh. “It was like, hmm … I might be waitressing for an awful long time.” A fellow waitress, Julia Jordan (now a playwright), was working at CNN. “She started telling me about the story meetings, and something about it just made me so intrigued.”

MacCallum found her way into journalism as a fact-checker at a financial magazine. Her first job in TV was as a production assistant at Wall Street Journal television, where she worked her way up to correspondent. She joined CNBC in 1997, anchoring multiple programs including Morning Call, and landed at Fox News in 2004, where she has been the lead reporter on election exit polls. In 2010, she began hosting the morning show America’s Newsroom with Bill Hemmer. She’s logged a succession of high-profile interviews with the likes of President Trump, David Petraeus and John McCain. (She was also the lead reporter for the wedding of Kate Middleton and Prince William. According to family lore, the Queen Mother is a distant relative: “I can’t prove it. I’m probably as royal as Elizabeth Warren is Cherokee.”) She moderated primary debates during the previous election cycle. And in 2017, when Megyn Kelly’s exit left a gap in Fox News’ evening lineup, MacCallum left mornings behind to move into the 7 p.m. slot.

“It was tough to break up her and Hemmer,” notes Fox News president Jay Wallace. “It was one of my favorite shows to watch. It was a testament that Martha had it in her to have her own hard news show.” She’ll anchor midterm election coverage as well as the 2020 presidential race, alongside Bret Baier and Chris Wallace.

MacCallum’s ascension came in the wake of misconduct allegations that brought down O’Reilly and network founder Roger Ailes. But, she says, Fox News is in a “better place,” after a leadership change that included the promotion of Suzanne Scott to CEO. “At the time, people were quick to point fingers and say, ‘How could you not know?'” MacCallum recalls. “And now I’ve watched the sisterhood at these different networks go through similar things, where they also felt shocked and defensive about the people who were being accused. [Now] they know what we went through.”

MacCallum has a crisp rhetorical style that is particularly effective with evasive interview subjects. But she also exudes a playful can-you-believe-we’re-really-talking-about-this tone that can drain some of the venom from the current events she’s covering on any given night. This served her well on America’s Newsroom, where MacCallum and Hemmer delivered the headlines — and engaged in banter — from side-by-side chairs, without the crutch of an anchor desk. “They used to fight me all the time about getting a desk,” says Wallace. “They were like, ‘We want a desk for our papers.’ And I said, ‘I know you want a desk, but there’s something about the two of you in an open-air studio. The way you communicate makes me feel happy. I don’t want a desk between you and the audience.'”

When MacCallum — who’s married with two sons, Harry, 17, and Reed, 20, and a 22-year-old daughter, Elizabeth — was first approached about an evening show, she was clear that she did not want to be on too late. “I wanted to be home in the evening,” she says. “[Harry] was a junior in high school. That time goes really quickly.” Elizabeth graduated from Villanova last spring and now works on the Senate campaign of Tennessee Republican Marsha Blackburn; Reed is at Notre Dame, where he plays football. MacCallum worries about head injuries, she says, but “I also wouldn’t stand in his way of something he really wants to do.” And yes, the New England Patriots fan thinks NFL players should stand for the national anthem. “It’s legitimate to protest,” she says, “but I think that there are better ways to handle it.”

MacCallum did not play team sports in school; but she notes, with embarrassment, that in high school she was a cheerleader. “I think cheerleading is kind of dumb,” she says. “I didn’t admit to my daughter that I was a cheerleader until she was past the age when I thought she might want to do it. I thought she should be on the team, use her mind, write for the newspaper.”

Her friends say that it is MacCallum who organizes get-togethers, including a mother-daughter book club (among the titles they selected: Barack Obama’s Dreams From My Father) and an annual Christmas caroling party that began as a small affair and grew to well over 100 participants.

“We meet at the 21 Club and we wait for her to finish her show,” says her friend Lisa Gallo-Conklin. “Then we go person to person and talk about our kids.”

For MacCallum, like most of us, the intense polarization of today’s political climate bleeds into personal relationships. “In my family there is so much division,” she says. “In my friend group, absolutely. It’s gotten to the point where we really just can’t talk about it,” she says. “I usually am pretty good at playing the arbiter but it’s so hot, these issues are so hot for people. It’s not like when we were growing up where people had friends of all different stripes and everybody could argue politics and then move on to dessert. It’s much trickier than that now.”

MacCallum is a voracious reader, especially of historical biographies like William Manchester’s World War II memoir Goodbye Darkness. She’s writing her own book on Iwo Jima, weaving in the story of her mother’s cousin Harry, who died there at 18. A dedicated Catholic, she has felt her faith in the church shaken by her reporting on child sexual abuse revelations. The person she’d most like to interview? Pope Francis. “I would like to see a lot more aggressive transparency.”

Aggressive transparency could be an antidote to Americans’ loss of trust in all kinds of institutions — for which many blame cable news and its careen from bickering pundit panels to breathless opposition coverage. “People choose their modes of information in much more tunneled ways. I think cable news contributes for sure,” MacCallum concedes. “I think President Trump contributes. So much of society has become coarsened, not just political repartee — music, fashion. It’s difficult to put the blame in any one place. And I don’t know how we get back from here. I hope there’ll be a gentler time ahead. Maybe people just get so tired of all of it that they decide that they want to engage differently? We’ll see.”