Continue to The Hollywood Reporter SKIP AD
You will be redirected back to your article in seconds
Skip to main content
July 14, 2020 7:00am
Logo text

Naya Rivera is being remembered in headlines as a “former Glee star,” but to countless queer women like me across the globe, she has been and will always be so much more. Her sudden tragic death, confirmed Monday, has sent a wave of profound sadness across what was once a vibrant and vital fandom. And it’s a reminder how much it means when the people who portray LGBTQ characters become fierce advocates for that very same community.

Rivera’s Glee character, Santana Lopez, was always written to be devastating — the smoking hot cheerleader with the razor-sharp wit and bitch-with-pom-poms attitude. But over the course of the show’s six seasons, she became a beacon to lesbian, bisexual and questioning fans, especially young Latinx and Black fans, many of whom were seeing themselves onscreen for the first time. Now her death devastates us all over again.

Her character’s evolution on the show was also proof of the power of fandom in the early days of social media. In fact, she may have never become such a queer icon without it. Make no mistake, us fans willed the onscreen relationship into existence between Rivera’s Santana and her best friend and fellow cheerleader Brittany S. Pierce (played by Heather Morris).

When Glee premiered in 2009, the musical series was a sensation right out of the choir room. And — like any all-singing, all-dancing show choir worth its jazz hands — it had a cast of characters made of easily identifiable and easy to identify with archetypes: the sensitive jock, the singing Tracy Flick, the bullied gay teen, the rowdy bad boy, the diva-in-training and more.

While gay and bisexual male fans immediately found their champion in Kurt Hummel (played by Chris Colfer), queer female fans were at first just content to see Jane Lynch camp it up as coach-from-Hell Sue Sylvester. But then, in the 13th episode of that first season, a throwaway line launched an entire fandom. The episode, titled “Sectionals,” had Glee Club members conferring on a conference call (this was before Instagram was invented, so no one could slide into anyone’s DMs yet). 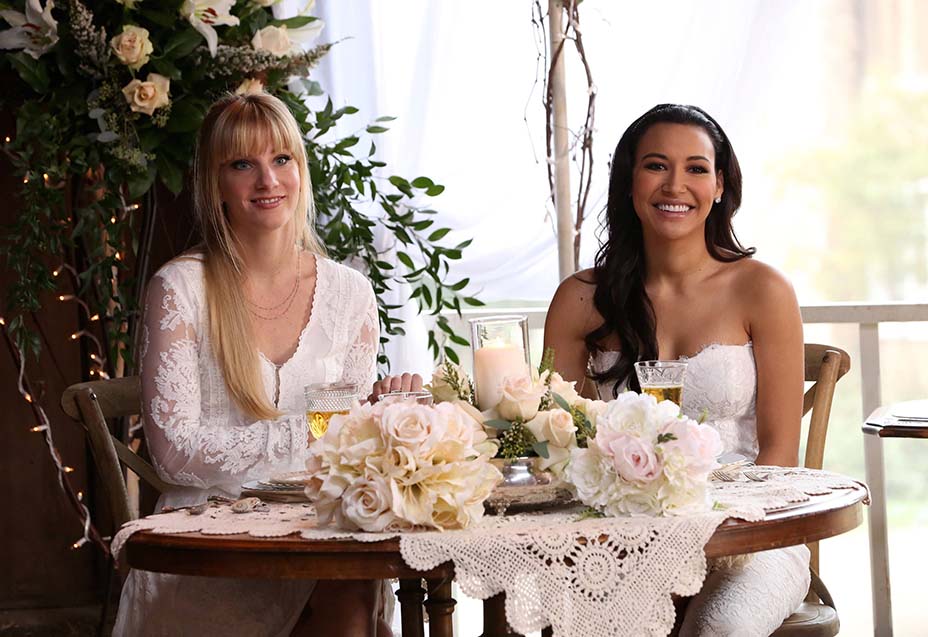 Kurt suggested Santana started a rumor because he thought she was dating the person involved. She replied with, “Sex is not dating.” Her constant companion Brittany concurred, “If it were, Santana and I would be dating.” Then everyone took a beat, three seconds pass, and it’s forgotten.

But for queer fans of the show, that was it. The very next episode, in another throwaway line, Brittany tells Santana “Did you know that dolphins are just gay sharks?” and the rest is internet history. Immediately, shippers dubbed Santana and Brittany “Brittana” and the hashtag #gaysharks was born.

Each week, Brittana fans would breathlessly live tweet using the #gaysharks hashtag. In the midst of the golden age of TV recapping, queer women’s media sites from Autostraddle to AfterEllen provided weekly recaps of the show, focusing on Santana and Brittany’s relationship and pushing for them to become a canon couple.

But in Brittana, fans could do more than just wish their faves would become real. They could, and did, demand it from show creators Ryan Murphy, Brad Falchuk and Ian Brennan — primarily by bombarding them on Twitter. It also helped that Rivera and Morris encouraged the relationship, posting cryptic tweets and later full-on cheerleading for the cheerleading couple’s relationship.

In doing so, Brittana became one of the first massive, mainstream femslash fandoms for queer and questioning women where we also got to see the relationship realized onscreen. Yes, there were others before (Willow and Tara on Buffy the Vampire Slayer and Xena and Gabrielle on Xena Warrior Princess being the early pioneers). But this wasn’t just on a cult show, this was on a major network show featured on the cover of glossy entertainment magazines.

From that point on, fans obsessed over every appearance, so much so that the show wrote us into the plot, referencing the “lesbian blogger community” among other references. Team #gaysharks also didn’t hold back when they thought the Brittana relationship was given short shrift or, in the case of Santana’s coming out (or more accurately outing at the hands of quarterback Finn Hudson — played by the late Cory Monteith), disrespected.

In the Brittana story and fandom, queer viewers found not only a voice but also power. Those in the LGBTQ community have long been accustomed to table scraps when it comes to representation in mainstream stories. Yes, things have gotten progressively better over the years and a character revealing her, his or their sexuality is no longer the stuff of Very Special Episodes.

But through Twitter and other social media, we found a concrete way to petition for what we’d wanted all along — fully realized relationships between two out female characters who were (in the parlance of fandom) endgame. While straight couples have countless romantic pairings to choose from onscreen, queer women were still waiting for their happily ever afters. The onscreen pair eventually married in a joint wedding with the show’s queer male couple, Kurt and Blaine, in the final season. 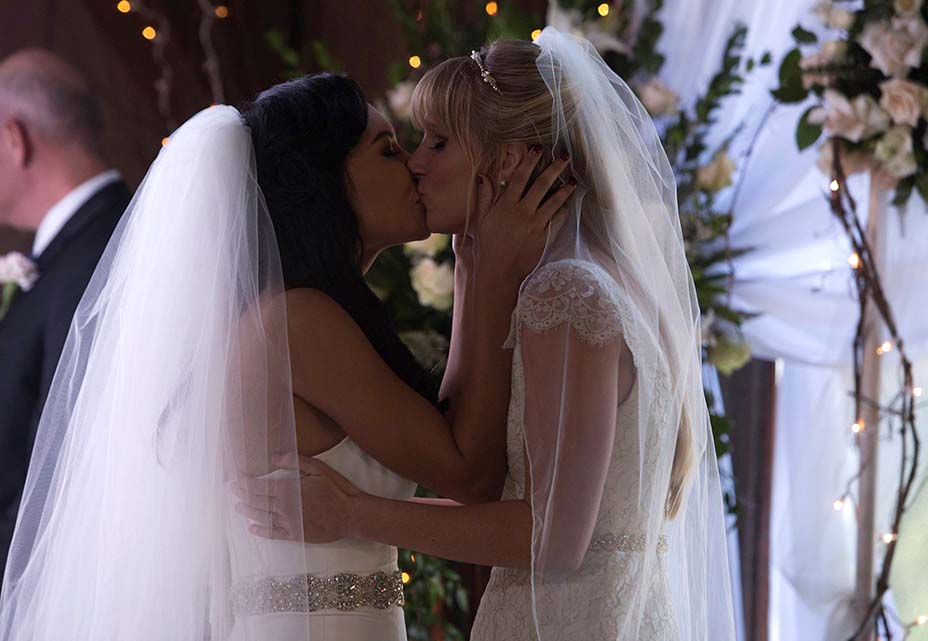 Still, gay stories onscreen always pack more punch when the actors playing the characters support the LGBTQ community. Rivera never shied away from her queer female fandom or Brittana’s onscreen relationship. Her embrace of her lesbian, bisexual and queer viewers was never in question. She attended (and hosted) the GLAAD Media Awards and spoke out in interviews.

While her portrayal of Santana could have been just your standard mean girl, she gave it layers and nuance. Fans could see themselves in her initial defensive cruelty, which was really masking a secret about herself. Latinx viewers felt her heartbreak when her abuela rejects her after coming out.

Her journey from closeted to out-and-proud mattered at a time when were desperately fighting for some of the most basic LGBTQ civil rights. Glee came on the air before marriage equality was law of the land, and went off the air months before the Supreme Court affirmed it in Obergefell v. Hodges. And just this year, LGBTQ people finally won the right to not be fired for simply being who we are.

It’s not hyperbole to say Rivera’s portrayal of Santana Lopez saved lives. It certainly changed lives. The more people in marginalized communities see themselves fully reflected onscreen, the less alone we feel and the richer the world becomes for it.

So now we are all devastated by her loss. The sadness we feel settles slowly, like a fog as it has always done when someone who once meant so much to us is suddenly gone. Here is a talented, compassionate woman who had so much more to give. Yet still, in her reported last act on this Earth of lifting her 4-year-old son into the safety of the boat — she is still saving lives. And as new generations of queer women find Santana Lopez through the years, she will continue changing the world for the better.

Dorothy Snarker writes about LGBTQ and pop culture daily on her blog dorothysurrenders.com. She is a past contributor to Autostraddle and former longtime writer for AfterEllen.Follow her @dorothysnarker.