Continue to The Hollywood Reporter SKIP AD
You will be redirected back to your article in seconds
Skip to main content
March 12, 2018 6:15am
Logo text

Think of NBC’s Rise as a twist on Friday Night Lights — except with a drama club replacing the latter’s central football team.

Creator Jason Katims wants his new NBC drama — premiering Tuesday after the season finale of This Is Us — to have the same ensemble feel as that of his critically praised Friday Night Lights (and Parenthood), where viewers care about every member of the production, from the lead of the school play and her mother to the son of the inspired drama club director as he battles a drinking problem.

Rise, which counts Hamilton producer Jeffrey Seller among its exec producers, is inspired by (but not based on) the book Drama High, which tells the true story of Lou Volpe, a high school teacher who revitalizes his school’s drama department. The series — for which Katims received a created by credit from the WGA — centers on Lou Mazzuchelli (played by How I Met Your Mother’s Josh Radnor) as he refuses to accept the status quo and demands better of the drama department and thus breathes new life into the small, rundown Pennsylvania town, its students and their families. 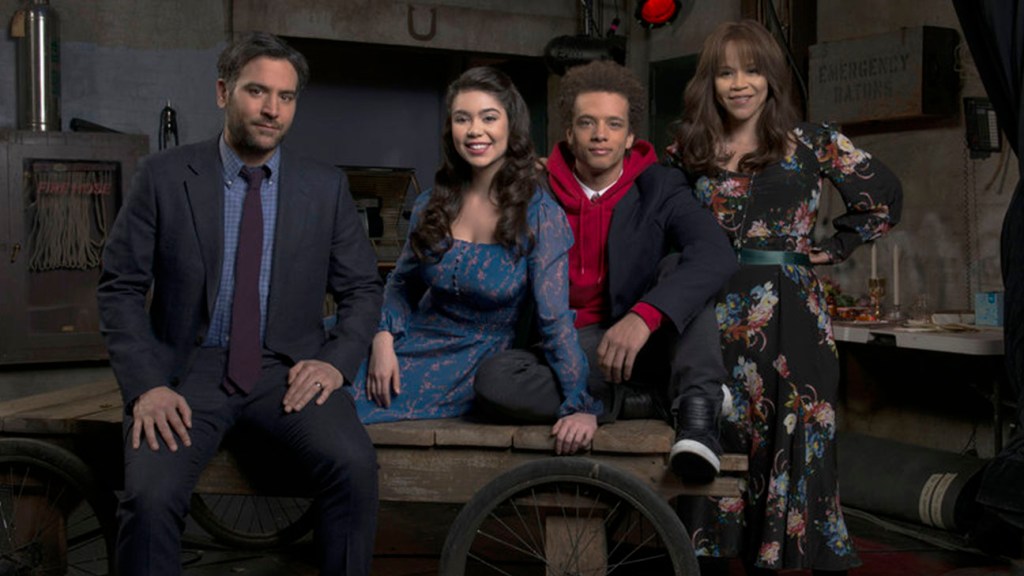 For those not familiar with Katims’ résumé, Friday Night Lights did the same thing with Coach Taylor (Kyle Chandler) and Tami (Connie Britton) as the married couple infused their Texas town via its beloved football program.

“I did see some connectivity between Rise and Friday Night Lights,” Katims tells The Hollywood Reporter. “I was drawn to the fact that this was a school in a small town that was facing some challenges economically and otherwise and thought we could approach it in a similar way [to FNL] where you lean into the nuanced, intimate stories of the characters and film it in a way where you don’t feel like you’re looking from a distance but instead you feel like you’re living with them.”

Like FNL, Rise will make good use of its sprawling ensemble, which that features 11 series regulars and even more standout supporting players — including an openly transgender high school student (played by nonbinary actor Ellie Desautels in a breakout role) — as each episode will tackle anywhere from four to six different storylines. Those include the school play Spring Awakening and the students who comprise the cast, their home lives and the relationships their parents have, while also tackling timely subjects including sexual harassment, sexuality, religion, substance addiction and the class system. For Katims, that’s all part of his larger goal to prevent Rise from being “pigeonholed” as simply being a “high school musical show.” 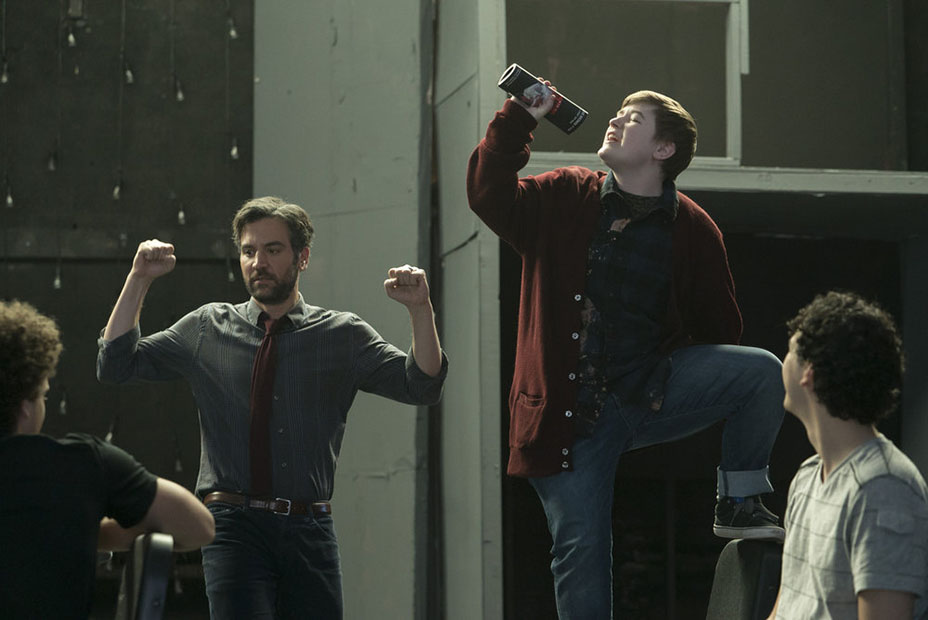 The series instead comes off as a mix between early seasons of Fox’s Glee and Katims’ Friday Night Lights, where the musical scenes from Spring Awakening ring true for what the characters are experiencing. “When you marry the power of those songs with the investment you start to feel with the characters in the show, it’s unique and powerful — and I was surprised by how powerful those musical moments could be,” Katims says. Think of Rise as a collection of mini Parenthood-like stories where each student and their parents are fully fleshed out characters. And NBC, too, has confidence that the Rise‘s emotional stories will resonate with This Is Us viewers, many of whom thought Katims created the latter show. In a nod to the confusion, Rise will sample after the season two finale of This Is Us before taking over its slot on March 20.

One of the challenges Radnor’s Lou faces in taking over the department and staging a controversial play like Spring Awakening is winning over the small town’s residents, many of whom don’t understand the importance of arts in education. “That’s really at the core of what the show is about,” Katims says, pointing to some of the many student activists who have emerged in Florida following the deadly shooting at Parkland High School. Many of the advocates for gun control participate in the school’s drama club — and as Katims notes, “at least one, maybe more, was in a production of Spring Awakening when that happened.” In a bid to practice what it preaches, NBC recently awarded 50 $10,000 grants to theater programs across the country, many of which had budgets of less than $400 and were on the cusp of being shut down.

While Rise has already had its share of controversy — Katims’ January comments were misconstrued and the show was accused of “straight-washing” Lou as Volpe in Drama High (as he is in reality) came out as gay after 25 of his 44 years running the program. Katims met extensively with Volpe and Drama High author Michael Sokolove (who was one of Volpe’s students) while also visiting the town where he taught in a bid to capture as much of Lou’s spirit as he could without doing a page-by-page take on the source material and Volpe’s life. “One of the things I learned from both Friday Night Lights and Parenthood was that I had to make this show my own,” Katims says of his two film-to-TV reboots. “It was always intended to be a show inspired by a real story but not based on it. And I wanted to do a lot of my own work of creating my own fictionalized version of this so I could lean into everything I wanted to as a storyteller.”

Katims points to stories of Lilette (Auli’i Cravalho of Moana fame), the insecure girl who steps into the spotlight after scoring the lead in Spring Awakening and her “townie” mother; Robbie (Damon J. Gillespie), the quarterback with a heart of gold who can sing and finds his loyalties between both programs put to the test; Simon (Ted Sutherland), the devout Catholic who is grappling with his sexuality, much to his parents’ chagrin; and others who don’t exist in Drama High.

“I wanted to come into Lou’s life at a moment when he is in a crisis about his life as a teacher and seeing what’s happening to his town and wanting to affect change,” says Katims, who won’t rule out a world in which his Lou comes out should Rise succeed. “I feel like I reinvented Lou’s family life for the show — the storyline with his son is prominent and a big part of the show and that was fictionalized.

While Katims is still deeply hurt by claims that the show “straight-washed” Lou, the showrunner is honest about his vision for his show’s central character. He doesn’t want to say that Lou will, like his namesake, eventually come out because that’s “not necessarily” his plan. Instead, like his experience on Parenthood with Ray Romano’s Hank, he intends to let the show dictate what feels right. Hank was originally introduced as a love interest for Lauren Graham’s Sarah. The character soon discovered that, like Sarah’s nephew, Max, he too had Asperger’s Syndrome. “I never thought of Hank as character with Asperger’s but when I watched his connection to Max and the idiosyncrasies of his performance, that felt real — and it came from my personal life when I went to an Autism conference and sat in on a group of adults who were all diagnosed with Asperger’s as adults,” Katims says.

“What I love about doing TV is that it evolves in an organic and natural way and sometimes it leads you,” he adds. “I always let the stories lead me in what people respond to in the shows that I’ve done. People feel like there is an honesty and emotional truth to them. And that is how I’ll gauge what happens with Josh Radnor’s character as we hopefully get to tell the story for multiple seasons.”

Asked if he has a message to those who refuse to sample Rise following the backlash — Katims says he was “devastated” by the allegation — he encourages skeptics to take a chance on a “deeply felt and emotionally honest” show that leans into subjects of gender and sexuality in a way that’s honest and fair. “Of all the shows that I’ve done, I feel as proud of what I’m doing with Rise as any show I’ve ever done. Rise to me is a show that’s a poster child for inclusivity — and not just the transgender and gay storylines but we also have a character with Down syndrome,” he says. “And we love all of these characters and are rooting for them. It was devastating to see the choice we made was being misinterpreted as something that is not true of what the show is when people see it. It was never meant to be an adaption of the book.”

Ultimately, Katims hopes viewers will identify with Michael and Simon’s story, as leaning into gender and sexuality was among his top priorities. (The show also features a lesbian couple where their sexuality isn’t even addressed.) “If you watch over these 10 episodes, Simon’s story of him dealing with his sexuality over the course of the season is as moving as any story I could have told for Lou’s character — and he has as much screen time as anything that Lou has,” Katims explains. “If you look at Michael’s story over the course of the season, we touch on bullying but wanted instead to make that story about a trans character who is smart and comfortable in his own skin — and talented and a great friend who becomes a beloved member of this troupe.”

In success, Katims hopes Rise will have a multiple-season run and feature a different musical at the center of every season, where the characters will always come first. “If we’re lucky enough to get another season, we would explore other plays and musicals and try to find ways to make them resonate thematically with what’s going on with our characters that season,” he says. For the time being, production has wrapped and many castmembers have been busy pitching Katims ideas for the play at the center of a potential second season — while still capturing Volpe’s spirit. “He’s a beautiful man and amazing educator with a rare ability to see into your soul when he speaks to you.”

Rise premieres Tuesday at 10 p.m. on NBC before moving to its regular slot at 9 p.m. starting March 20.