When the writing staff of The Rookie remotely reconvened in June, they weren’t exactly sure what to do. Not only were they setting out to make a third season of their ABC drama during a pandemic, they had to break stories for a cop show as countless Americans took to the streets in protest of George Floyd’s murder, days earlier, by Minneapolis police — and of the systemic racism that made his tragedy all too common. Writing a police procedural, the bread and butter of broadcast TV, was suddenly quite complicated.

“We’ve always been aspirational in our storytelling, but we realized that being aspirational isn’t good enough,” says executive producer and writer Terence Paul Winter, recalling his first conversation with longtime collaborator (and The Rookie showrunner) Alexi Hawley about how their series could take to cues from the movement. “We can’t do one special episode, where we feel good and solve racism in the end, and then go back to our usual thing the next week. We want to change things for as long as we get to do this show.”

Though one of more than a dozen broadcast series to focus on law enforcement, The Rookie is uniquely equipped to lean into recent events. Its 13-person writers room has a relatively diverse composition, only majority white by one individual, and its cast (save lead Nathan Fillion) is almost exclusively made up of persons of color. But even with a surplus of sounding boards and one former cop on the writing staff (co-producer Fredrick Kotto, a Black man and a retired San Jose Police Department sergeant), Winter and Hawley knew they’d need outside guidance if they really wanted to rethink their approach to the show.

Enter Color of Change. The civil rights advocacy nonprofit, which has sprawling initiatives pursuing criminal justice, voting rights and economic reform, is becoming more and more involved in the entertainment industry in an effort to help it move away from the unhelpful narratives audiences see on-camera. “What we see on TV, it impacts the way we vote, the way that we react to people and even the way that we either believe Black Lives Matter is a terrorist organization or not,” says Color of Change culture and entertainment advocacy director Kristen Marston, who’s consulted on more than 100 TV series about issues facing Black Americans. “These things are so foundationally important.”

After publishing a rather damning 153-page report on crime in scripted TV — Normalizing Injustice details the myriad ways the medium, subtly and overtly, undermines racial equality — at the top of 2020, Color of Change’s Hollywood arm has spent the year since walking welcoming writers, producers and executives through their findings. It was a mutual friend in the Writers Guild of America who initially connected Winter and Marston. And after Marston presented the Rookie staff with their findings, a courtesy that has sometimes been the extent of a collaboration, the two parties began a near-constant dialogue about how to move the show away from the genre’s trappings. Martin and her colleagues have offered notes on all Rookie scripts for the third season, including the five filmed since production finally resumed in September, talking with writers about where certain scenes overstep bounds and identifying opportunities to lean into previously unmined subjects.

When the new season of The Rookie premieres Jan. 3, producers insist it will still be the levity-filled drama about a middle-aged man starting a career as a beat cop. But it also addresses racism on the force, the over-policing of Black communities, the question of alternative solutions to traditional law enforcement and, just as importantly to Marston, lots of small things procedurals tend to overlook.

Inside Color of Change’s Renewed Fight Against Police Procedurals: “These Shows Have an Agenda”

Says Winter, whose resume includes Castle, Training Day and Lethal Weapon, “Look, I’m a Black dude from the South Side of Chicago and I’ve been riding on cop shows for I don’t know how long. I didn’t want to make a Black woman a victim just because I felt like I don’t want to see my sisters as the victim. I didn’t realize, until Kristen brought it up in the report, that I was part of the problem.”

ABC appears keen to embrace The Rookie’s new direction, plugging the pivot in trailers for the 2021 return and hosting a panel discussion in late November with select Rookie producers and cast, Color of Change vice president Arisha Hatch and reform-minded cop (and Breaking Barriers United founder) Ryan Tillman. In talking through the work to change the series, and the genre, Hawley was also open about past missteps.

“We were portraying a version of the police and the LAPD that was alien to many people,” acknowledged Hawley. “We really needed to honor the conversations going on in the wake of George Floyd’s death by digging into the reality of systemic injustice and police abuse — without losing what makes our show our show. And part of what is coming out now is this idea that you can’t truly be a good cop if you’re not doing anything about bad cops, that ultimately silence is complicity.” 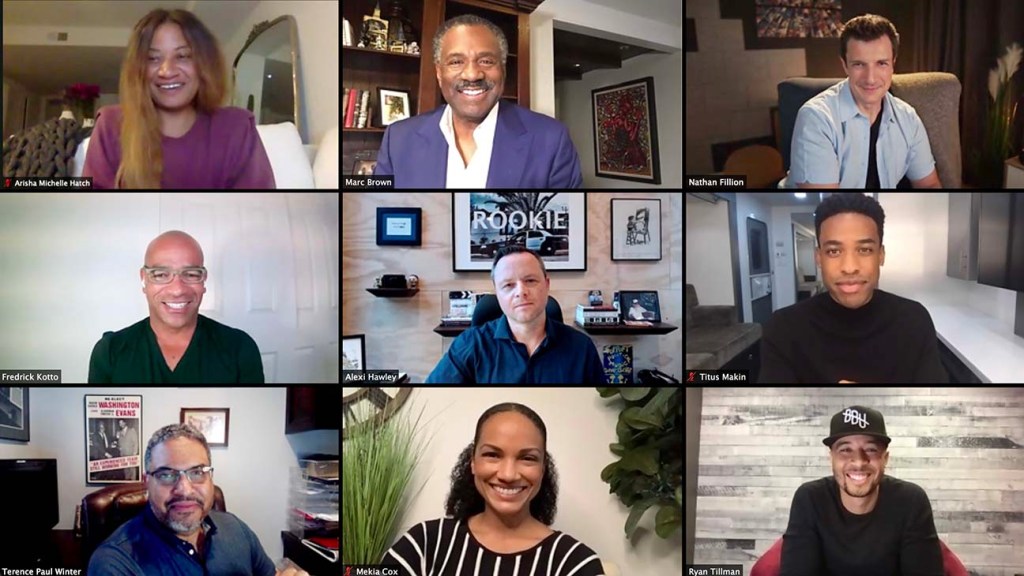 The silence Hawley spoke of applies to both cops and the series that focus on them. Color of Change has consulted on more than 50 series, but a great number are still going about business as usual. And while she’s skeptical about how long the renewed awareness can last, Marston wants people in the industry to know that it’s not difficult to talk about these things: “As soon as the writers who’ve kind of been falling behind realize the significant power they have, I feel like we’ll be in such a better place.”

Color of Change has taken several steps make it easier for the film and TV to show up for the Black community since the summer. The group partnered with Michael B. Jordan in June on #ChangeHollywood, an initiative that aims to provide concrete steps that can be taken by studios, production companies and agencies to invest in anti-racist content, authentic Black stories and Black talent. That includes building a growing list of police consultants (progressive and reform-minded officers and former officers) available to writers rooms — as well as as resources for series that don’t even touch on law enforcement. (Subjects like white privilege and systemic racism are not exclusively pertinent to procedurals.)

During their November panel, Rookie producers and actors spoke excitedly about the adjustments they’ve been able to make, but all were quick to note that their new focus is not to climb any soap box. Vegetables, after all, have never had much success in the buffet of primetime television. And with a weekly audience of 8.2 million viewers, their challenge is to now entertain and inform — not merely do one or the other.

“We know this has always been happening, we’re just seeing more of it in the news,” Marston says of the real-life problems that find their way into the third season of The Rookie. “It’s fresh on people’s minds, but we like want to create lasting relationships where writers can continue to come to us. This season is so groundbreaking. It really sets the precedent that, yes, we can have these conversations about policing and still be entertaining.”

As for Winter, entertaining viewers is something on which he’s long prided himself. But he notes that he’s now keenly aware that are multiple ways to find satisfaction in making TV. “It’s not to disparage the work I’ve done before,” he says, “but to be able to do something that’s a little more in-depth, a little honest, it’s been wonderful.”