[Warning: This story contains spoilers from the “Bakra” episode of Outlander.]

For the second time in three seasons, Outlander flipped the script and showed a male being raped.

Before Claire (Caitriona Balfe) and Jamie (Sam Heughan) could arrive at Jamaica in search of the kidnapped Young Ian (John Bell), Outlander on Sunday flashed back to the latter’s abduction and revealed what happened to him during his time on Silkie Island. When Jamie’s 16-year-old nephew attempted to bring the Silkie treasure box back to Jamie and Claire on the shore, the Bruja pirates kidnapped him. They were coming to retrieve that same treasure box for the mysterious “Bakra,” and since this Bakra “liked young boys,” they took Young Ian with them. They arrived in Jamaica, and Young Ian found himself a prisoner with two other boys. There, he feared he wouldn’t make it out alive when the boys informed him that no other boy had returned to his cell after being taken to the Bakra.

When Young Ian’s turn came, he was brought to the Bakra, and didn’t realize who he was talking to: the naked woman taking a bath in goat’s blood right in front of him was none other than Geillis Duncan (Lotte Verbeek). Geillis, another time traveler who was believed to have died during the witch trials in season one, needed all three Silkie sapphires for some kind of prophecy about when a Scottish king would take the throne back. And since Jamie gave one sapphire to John Grey (David Berry) back at Ardsmuir Prison, the woman (well into her 40s) drugged Young Ian with tainted tea to make him tell her about his uncle, hoping to find out where her sapphire was. 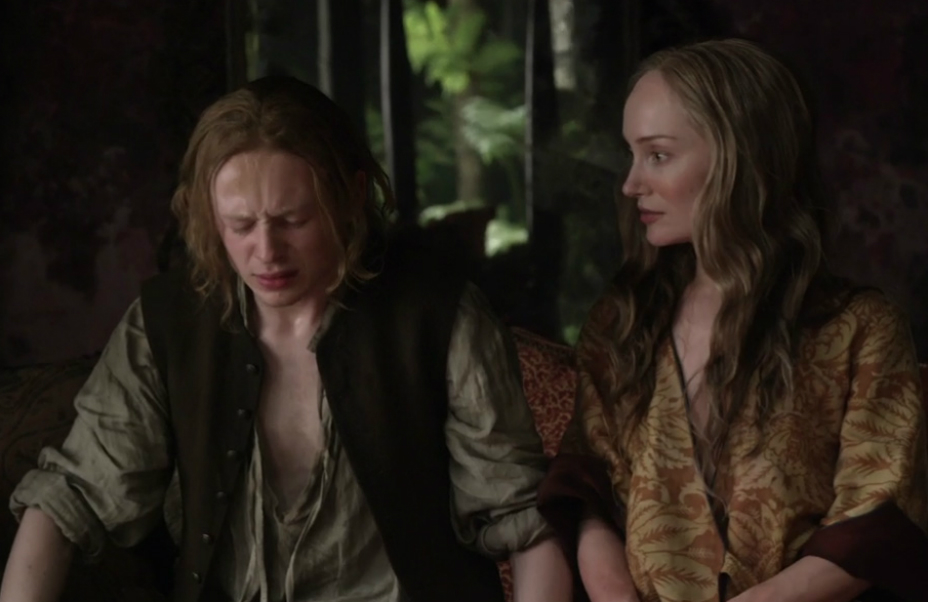 Once Young Ian gave her the information she needed, she began caressing him with her leg, letting her robe fall open as she rubbed her body on him — despite his obvious fear. When he asked her (for the second time) what she did with the other boys she had kidnapped, she matter-of-factly told him, “I have my way with them. Virgins have such power inside. After that, I have no use for them, have I?”

It’s heavily implied she had the boys killed after raping them, which only frightened Young Ian more. When he tried to escape by revealing that he’s not a virgin, she only replied, “Good. You’ll know what to do then.” She opened her robe, exposing herself to him, and the camera quickly cut away to the opening credits.

While Outlander did not actually show the act of Geillis raping Young Ian, it does take place. What’s more, it plays out almost exactly how it happens in the novel Voyager, upon which season three is based. The episode then jumped forward to catch up to Claire and Jamie as they arrived in Jamaica. Young Ian was not shown again.

While it’s unclear if the TV series will follow suit, Young Ian and Jamie in the book have a heart-to-heart about how it’s OK that the young boy liked the physical feeling of what happened with Geillis even though he did not want to go through with the act. Jamie assures his nephew that he ultimately saved his own life by going through with it.

Sunday’s episode was the second time Outlander took on rape in an unexpected way. At the end of season one, Black Jack Randall (Tobias Menzies) raped Jamie in prison. While rape has been an almost regular threat hanging over the head of Outlander‘s central female character, Claire — who is nearly raped by men practically once per episode — she has never been raped. While seeing rape on premium cable is no longer as taboo as it once was, the way in which Outlander continues to depict it subverts the norm with more male victims than female.

ends up and what she has to go through … she may regret that jump,” executive producer Toni Graphia tells THR of that cliffhanger. “] 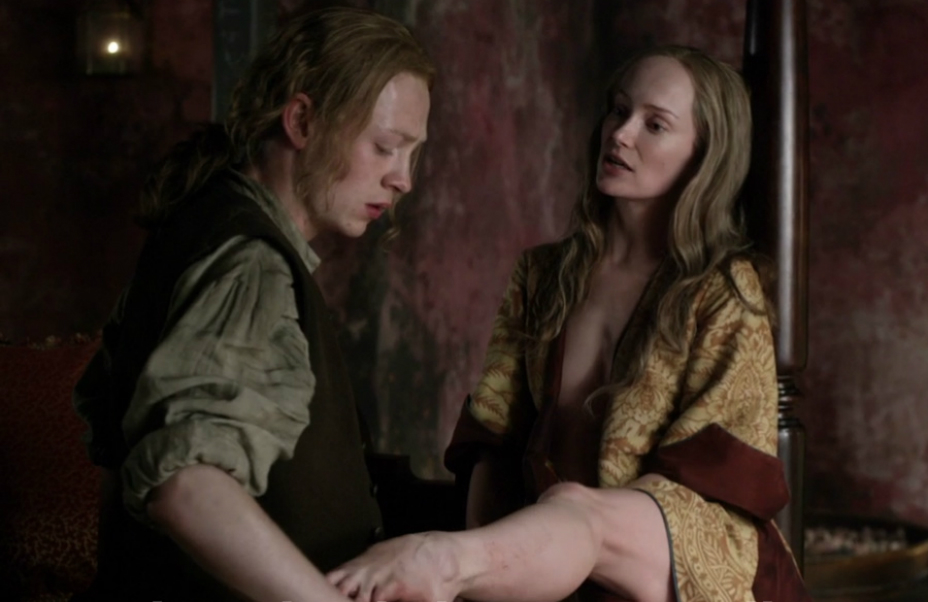 In a medium that often depicts stories from the male gaze — be it sexuality, nudity or violence — Outlander continues to change the script by telling stories from the female gaze. When Jamie is raped by Black Jack Randall in season one, gender roles were thrown out the window as the show’s male lead had to sacrifice his body to save Claire’s life.

In Sunday’s episode, Young Ian’s rape also served a feminist purpose as Geillis used her body to assert power over a man. That harkens back to an earlier episode this season in which Jamie again was forced to sleep with someone against his will when Geneva Dunsany (Hannah James) threatened his family if he didn’t take her virginity before she was forcibly married to someone else. In that scene, Geneva used her body and her position to assert power over a man who was physically bigger and stronger than she was. It was an example of the character taking agency of her own sexuality when she picked the person to take her virginity. That’s just one of the many times Jamie has been put in a position typically reserved for damsels in distress, as Outlander continues to put its female characters in positions of authority.

The time-traveling period drama continues to subvert expectations with Claire. As the female lead in the romantic drama, she is rarely (if ever) seen as the weaker character despite not having the same physical strength as Jamie. She uses her intellect and strong will to consistently save her husband. A prime example occurred Sunday, when Jamie was arrested by Captain Leonard (Thomas Hiett) as he finally caught up to the couple in Jamaica. As Jamie was taken away in irons, he shouted to Claire to find Young Ian. Despite its 18th-century setting, Claire is, once again, put in the hero role, fending for herself as Jamie knows she can get the job done.