It’s tough not to feel a sense of nostalgia when watching Netflix’s latest dramedy Sex Education.

The newly renewed British import created by newcomer Laurie Nunn is a quintessential coming-of-age narrative with a raunchy twist. Sure, sex is a subject most teens are at least actively thinking about if not consumed by, and the insecurity over that rite-of-passage is something the most seasoned of adults can still relate to, but unlike the millennial rom-coms Nunn and so many others grew up on — think Freak and Geeks, The O.C. and Clueless — Sex Education isn’t content with skimming the surface of that most taboo of topics.

Instead, Nunn and her mostly female writing team have dived head first into the deep end, nearly drowning in awkward conversations about the birds and the bees in order to bring a different kind of teen drama to the next generation.

“The angst of not knowing where you fit in the world is universal, because we all remember what it feels like,” Nunn tells The Hollywood Reporter, “but certain conversations around sex and identity have changed and moved forwards. A lot of old ideology concerning sex, gender and identity is currently being challenged and updated, so it feels like a great moment to explore different perspectives through a TV show.”

The series, which landed on the streaming platform Jan. 11, follows the story of Otis Milburn (Asa Butterfield), an awkward beanpole of a kid being raised by his single mother Jean (Gillian Anderson), who just so happens to be a sex therapist. Despite his mother’s blasé attitude about sex — her many adult sleepovers end with cringe-worthy interactions for her son at the breakfast table the morning after — Otis struggles with his own sexuality. He finds any kind of sexual intimacy, even masturbatory, repulsive, so it’s no surprise he’s still a virgin as he enters the high school ranks.

But Otis is just one of many teens grappling with their sexual identity in the series. Eric (Ncuti Gatwa) is Otis’ gay best friend, one of only two students who have come out of the closet at their high school. Maeve Wiley (Emma Mackey) is a young woman comfortable in her sexuality but constantly shamed for it by her peers. There are students with insecurities about their bodies, students unsure of their sexual desires, there’s even a girl desperate to lose her virginity but physically unable to do so.

That diversity, that resolve to not shy away from all sorts of off-limits issues, has transformed Nunn’s series — a fun, frank, often filthy look at the lives of teenagers — into something more: a sex-positive show tailored for the Gen Z generation.

Nunn believes it’s Sex Education‘s vulnerability and honesty that’s gaining so much buzz, especially when it comes to its main male characters. (Netflix estimates that 40 million subscribers will have viewed at least parts of the series in its first four weeks of release.)

“I think we’re used to seeing ‘banter’ when male characters talk about sex onscreen,” Nunn explains. “I feel that not showing any male vulnerability within conversations about sex normalizes a lack of open dialogue between men. In my experience, many men are taught from a young age not to make themselves vulnerable, so talking about things that are potentially embarrassing often feels even more difficult. This is why I wanted to show a male friendship where they feel safe to reveal their vulnerabilities and flaws without fear of rejection.”

Eric and Otis’ constant conversations about sex toe the line between serious and heartfelt to, as Nunn fondly puts it, “juvenile jokes about penises and shagging.” There’s plenty of humor to be mined from their respective situations — Eric’s desire for a boyfriend, Otis’ complete abhorrence toward physical intimacy — but it’s never done in a mean-spirited way. Nunn says that was deliberate because one thing the show wanted to avoid was doubling down on toxic masculinity by seeming to support the idea that men shouldn’t openly share their sexual insecurities. 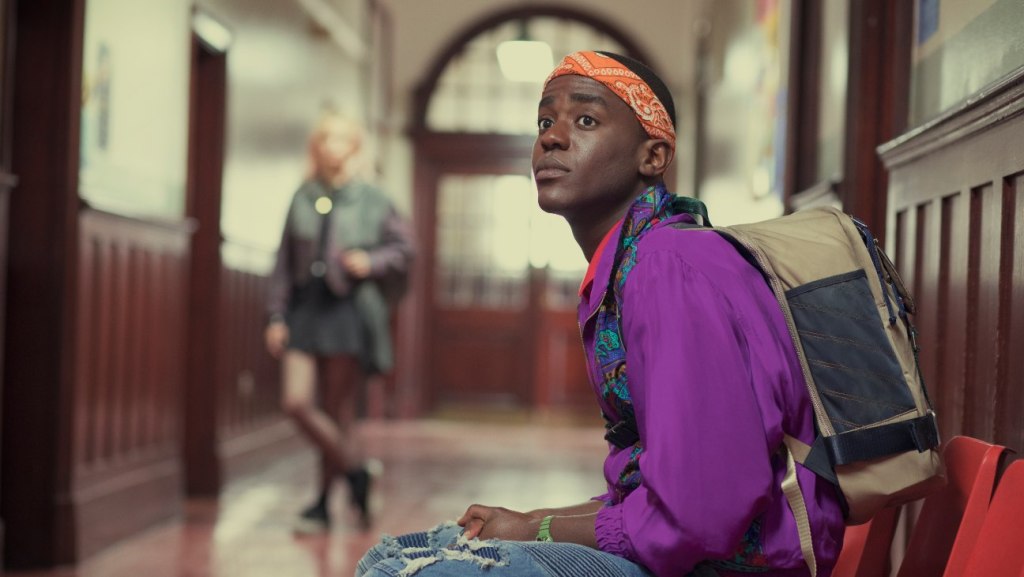 And if Otis is meant to be a more progressive male lead, an ally of sorts, Eric is the gay best friend who’s pushing back against tropes of his own. While the character experiences his fair share of bullying, harassment and violence because of his identity, his sexual orientation is never over-dramatized as is often the case on TV.

“I wanted his story to feel more complex than a straight coming-out narrative,” Nunn says. “Eric is learning how to bring the different strands of his identity together as a minority within a minority, and I wanted to explore how difficult that is when you’re only 16. He’s hard to categorize, and the truth is most people are.”

Of course, sex is a large part of the series. There’s copious amounts of nudity and depictions of sexual acts, though it’s not all heteronormative and it never feels gratuitous. Part of that is thanks to the show’s premise. Otis may be uncomfortable with participating in the act himself, but his peers aren’t. He’s got the knowledge thanks to his mother, and his friends have the desire and the cash, so he soon starts an underground sex therapy ring to help couples at school navigate the pitfalls of sexual intimacy. By looking at sex in a humorous, sometimes clinical way — scenes of two teen girls scissoring each other, or Eric receiving a blow job from the school bully —feel less exploitative, more educational in nature.

Nunn benefited from having the show housed on Netflix, a place that didn’t put any constraints on how she wanted to portray sex in any given episode. Instead, she chose to focus on things she wished she had known about sex as a teenager.

“I would always come back to the central question of, ‘What information regarding sex and relationships do I wish I’d known more about as a younger person?'”

But Otis and Eric aren’t the only central characters to the narrative of the show. Mackey’s Maeve is a bright young woman living in abject poverty without any parental guidance. She’s a lone wolf, an outcast slut-shamed for reasons viewers uncover as the series progresses. She’s tough, capable and not immune to mistakes when it comes to sex, either, which is why Nunn chose to insert an abortion storyline into the character’s arc midway through the season.

Unlike other dramas that squeeze every drop of imagined pain and trauma from this relatively easy and safe procedure, Nunn treated Maeve’s abortion as wholly unremarkable, just another thing she had to do on her own.

“The show is about sex, and one of the consequences of sex is conception,” Nunn says. “I wanted to show the experience of an abortion in a way that was entirely personal to Maeve’s character. This experience isn’t going to be the nicest one that she goes through in her life, but it also won’t define her. I didn’t want the storyline to play out as an unexploded plot-bomb, as abortion often does when portrayed onscreen. Maeve makes her choice and then does her best to get on with her life.”

Whether it’s a gay character experiencing violence and harassment, a young man suffering with performance anxiety or a teenage girl going through what is often viewed as a life-changing event, Sex Education feels determined to give younger generations a more honest look at body positivity, sexual identity and life in general than its predecessors.

“I think there’s an urgent desire among younger people to push through some of the old-fashioned ideologies about sex and pave the way for healthier conversations surrounding it,” Nunn says. “I wanted the show to be funny, sweet and tell a good story. I hope that our show encourages younger people to have healthier conversations about sex and reminds people it’s always okay to run your own race and do things in your own time.”