[This story contains spoilers from the season 10 finale of Showtime’s Shameless.]

Showtime’s Shameless wrapped its 10th season Sunday with a season finale that, like Emmy’s Rossum’s farewell last year, could easily have doubled for a series ender. The family drama had already wrapped production on the season before Showtime executives made the call to renew the John Wells drama for an 11th and final season.

Still, to hear Wells tell it, he wanted Sunday’s episode to feature a strong moment with the entire Gallagher family in the off-chance that the show didn’t return for one last run of family hijinks. Ian (Cameron Monaghan) and Mickey (Noel Fisher) got married — much to the chagrin of the latter’s father. Lip (Jeremy Allen White) stayed in the South Side — much to the chagrin of his baby mama, Tami (Kate Miner), whose decision to briefly leave with their son sent him back to the bottle. Debbie (Emma Kenney) was last seen being chased by police and is facing statutory rape charges after she slept with her girlfriend’s underage daughter. And Frank (William H. Macy)? He’s living in luxury after weaseling out of jail after he was set up by a woman from his past.

Below, Wells talks with The Hollywood Reporter about why Showtime’s highest-rated original series is ending, how the events of the finale will shape the final season and why Lip is the “spine of the show.”

'Shameless' Renewed for 11th and Final Season at Showtime

Shameless just renewed for its 11th and final season. Macy said before season 10 that he wanted to do two more seasons. What went into the final season decision?

Showtime felt the timing was right for the final season and I’m happy to go along with that. As I’ve always said, I love this show so much I could make it forever. I’m a little disappointed but not horribly upset because they have been such wonderful partners all these years. I love this family and this world so I wasn’t kidding when I said I could write it forever. But it’s about that time. I didn’t even talk to Bill about whether he wanted to do more or not because Showtime was pretty ready to be done, which is fine. Eleven years was a wonderful gift. I’ll just miss everybody when we’re done.

I’m surprised to hear the decision was theirs given that Shameless is their highest-rated original. Who from Showtime called you and what was their reasoning?

Gary Levine made the call. He said he thought it was time. You have to ask him what his thought process was. Honestly, we didn’t think we would ever get on the air. We were in development and trying to get Shameless made for seven years. If you had told me at the end of that process that it was going to then be on the air for 11 years, I would have laughed and said, “I just hope it’s on the air for one year.” I don’t want to sound ungrateful for a great run and tremendous support. 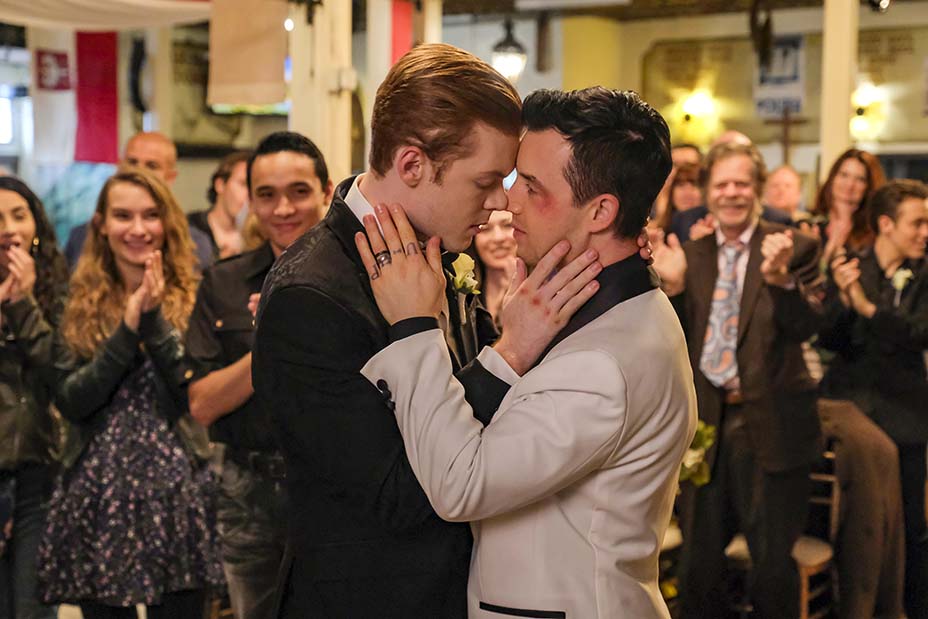 As for the episode, the season ends with Ian and Mickey’s wedding. Given that you were renewed after the entire season was completed, how much did you approach this as if it needed to double as a series finale as well as a season finale?

If you go back and look at the last few seasons, we have tried really hard to make certain that if it was the last episode and we didn’t do more after we had finished shooting that the audience would still feel that we hadn’t left them high and dry. Last season was Fiona (Emmy Rossum) leaving and we end with the family. This year we end with the wedding. I’ve done a couple series earlier in my career where we ended and we didn’t get to wrap up the story. I have always really regretted not being more proactive and making certain that the audience wouldn’t feel cheated. So, for the last few years, we have constructed final episodes that if Showtime was deciding not to move forward that we wouldn’t be doing that to the audience.

Mickey and Ian have been dancing around the idea of marriage for much of the season. Why was their wedding the family moment you wanted to end with?

During the time that we’ve been on the air, we have witnessed gay marriage going from being a divisive issue to being something that became the law of the land. Here are these two characters that we love, who have a complicated relationship and we’re all going to celebrate that they get to have a life together because they love each other. And they can have what everybody else has: they can get married and they can have a ceremony — even if some people are opposed to it [like Mickey’s father]. It’s important that we put lots of those images out to say, “Yeah, this is not going back; this is where we are now as a country and these are the decisions we made together and this is all not only acceptable but something we should celebrate going forward.” It was important to normalize it and see it as a real wedding

John Wells on 'Shameless' Future, the "Strange" Enduring Appeal of 'ER' and the Writers-Agents Standoff

Mickey’s homophobic father is actually trying to kill his son. Is that something you’ll continue to explore in the final season?

Absolutely — because not everybody is accepting what’s happening in the country. A lot of people are resisting.

Fiona wasn’t at the wedding and wasn’t mentioned by name. Did you try to get Emmy back for this?

Yes. She was just starting this new show — Angelyne — and she’s been preparing for it. I have seen some of the preparation and a lot goes into that. It didn’t seem like the moment. I previously told her that if her schedule permits that we would like for her to come back and help us say goodbye to the show because Fiona is such an essential part of the family. 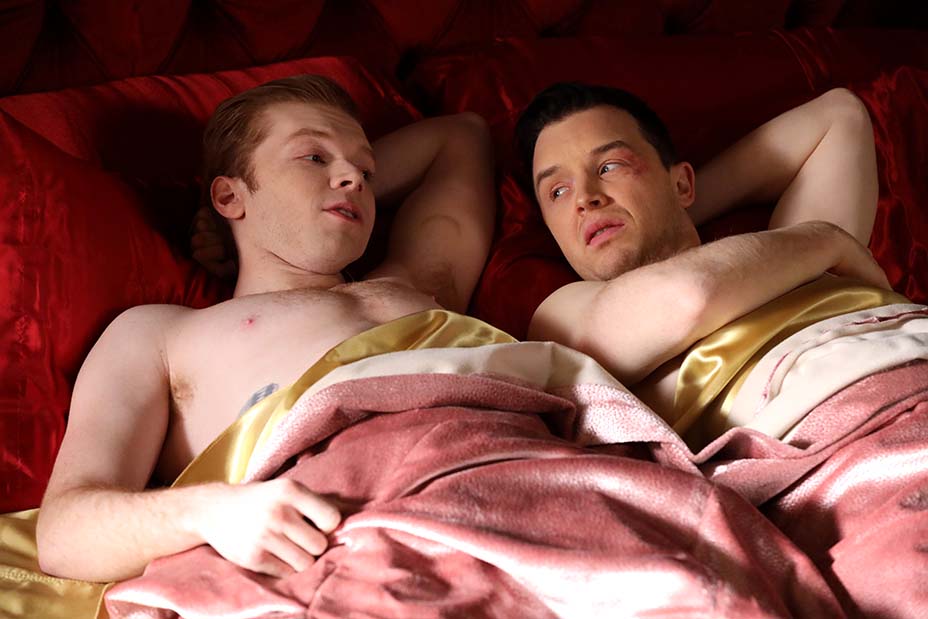 Debbie has been accused of statutory rape. What consequences will she face when the final season returns? Will there be a time jump?

There will be a little bit of a time jump but we’re not going to drop that story. Debbie has to register as a sex offender and do public service. She has to drop her daughter, Franny, off 100 feet away from the entrance to the preschool and we’ll play all of that. It’s too ripe. She’s standing at the line, 100 feet away, where a couple of the other sex offenders stand, when she has to let Franny go.

One of the things I enjoyed about this season was that Frank’s past continues to come back up —with good and bad results. Is that something that you’ll continue to lean into? And is that a theme that could tie into how his story, and the show, ultimately end?

His past will continue to come back. We don’t have any specifics yet. We love Frank but we also don’t want to leave this show with the impression that there are no consequences to the way in which he has chosen to live his life. We will find comedic ways to do that. We are not trying to condone Frank’s behavior as a parent or the choices that he’s made in his life. So that will continue to be part of where we go.

We haven’t gotten far enough along in our thinking yet about what next season will be to even get to that kind of point in the story.

You’ve told me, in multiple interviews, that Shameless is a show without a real ending. That you see the end as the camera pans down the street and you get the sense of life goes on. Knowing now that you have a final scene coming this year, how much are you already thinking about what that final scene is?

The final scenes I have written in my head a bunch of times because I always thought we’d be ending sooner. I have some thoughts about what it should be. Some of it will be once we get all the stories lined up. But it’s a family and the thing that has worked best about the show — beyond being able to satirize things and have some laughs and have some dramatic moments — is that these people care about each other and depend upon each other. And, in some way, the show will end with them still being that family. No matter how screwed up they are, we all wish we had them as a family. They’re supportive, care for each other and always ready to punch each other but they are always going to be together, surviving together.

With the writers’ room up and running for two weeks, do you have a larger sense of what the theme of the final season will be?

That sounds an awful lot like Lip’s story as he struggles to do what Tami wants for them vs. the pull of his family and how much he needs them.

Lip’s journey throughout the series — and what Jeremy has done with the part and what we’ve tried to write — is really the spine of the whole show from the beginning. He is becoming the patriarch. He is becoming the person who everybody depends on and we’ll definitely be seeing that progression in his life.

And because it’s rare in the Peak TV era for a hit show to sign off without a spinoff or movie, have you given any thought to what a spinoff would look like? Especially given your love for this show and its characters, would you do something like that?

No. We haven’t given any thought to it. I haven’t been big on reviving any of the shows or continuing shows. They have a natural ending. I don’t want to talk ill of anybody else’s attempts to bring something back but there is something about the first time they are on that’s kind of magical. It was a show that people loved and you run the risk of undermining that. We are really proud of what we’ve been able to do with Shameless and the stories we’ve been able to tell and frankly that Showtime allowed us to tell. So, never say never but we haven’t had any conversations about it.

Shameless will return later this year for its final season on Showtime.