The first four episodes of Sharp Objects, HBO’s dark murder mystery based on the Gillian Flynn novel of the same name, have very frankly shown the self-harm that Amy Adams’ Camille Preaker has inflicted on herself (and how hard she has tried to hide it from her friends and family).

In the fifth episode, the hard-drinking, self-harming journalist steps out of a store dressing room to show her mom and her younger sister the extent of her scars. Those scars were specially created by special effects makeup artist Adrien Morot, who not only designed how they would look on Adams’ body, but also developed a special formula of medical adhesive that he would adapt depending on the shooting conditions.

Chris Messina Explains Why His 'Sharp Objects' Character Is Not Good At His Job, Either

Morot and Adams’ makeup artist, Kate Biscoe, spoke to The Hollywood Reporter about creating the scars, mapping them on Adams’ body and how long it took to apply them. To start, Morot looked at comparable makeup done in previous projects and then figured out what he needed to do to adapt it to his needs.

“Obviously we had to take a few things into consideration in terms of the materials that we were going to choose to make those prosthetics,” he explained. “Where are we going to shoot? What kind of conditions are we going to be shooting that under? How long do we have to do that makeup? How does it need to look and how long is it going to take to remove at the end of the day?” 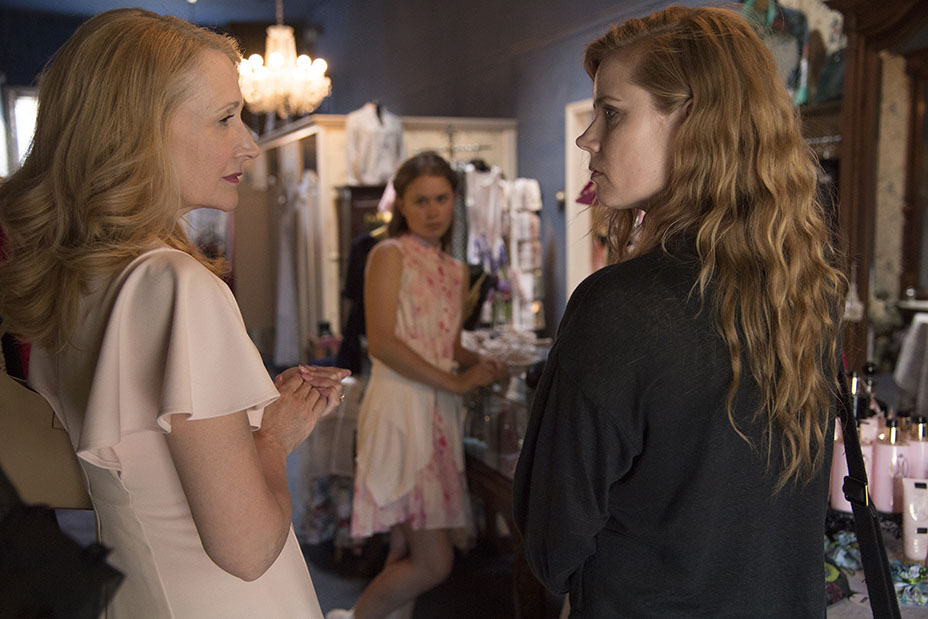 For example, in The Passion of the Christ, Jim Caviezel’s scarring took around five or six hours to apply and two more hours to remove. Morot knew that wouldn’t work for Adams, who had weeks where she needed to be in full-body makeup — and was executive producing Sharp Objects as well as playing the lead role. The final product he developed worked more like a temporary tattoo transfer, cutting down the process to two and a half hours (or less — though he and his team would have to refill the molds each night after filming wrapped).

“You don’t have to apply some glue behind every letter,” he said. “We had this sticky, medical adhesive material that was scraped into molds of all the letters and all the words on her body, and then that would be pressed against her skin, and then we would peel it off and the word would be there.”

The stickiness proved problematic on occasion. Adams recalled to reporters that “the minute you put clothes on, it would start to get crazy and so it would end up full of lint and sticking to things.” She praised Morot and his team for the hard work they put into perfecting the look.

Another challenge: figuring out what words would appear on Adams’ body, then mapping them out appropriately. Around 50 or 60 words appeared in the book, but when Morot did a test using a body double, he realized that it would take between 350 and 400 words to cover Camille’s entire body — and tasked the writers with coming up with the rest of the words. Then, he hired a body double to sketch the words on her own body.

“I gave her a water-soluble marker and a mirror and had a list of words,” Morot said. “I had her write those words all over her body, because I wanted it to be as authentic as possible, not as if a third person would have started writing words on her back that looked perfectly readable. I wanted it to look like as if she would have carved it herself on her back. She took that marker and wrote on her back, looking at herself in the mirror, as far as she could reach. Some of the words are weirdly angled, some of the words are not even readable properly because of the way she wrote it. There’s even this pretty big blind spot right in the middle of her back where she couldn’t reach at all.” 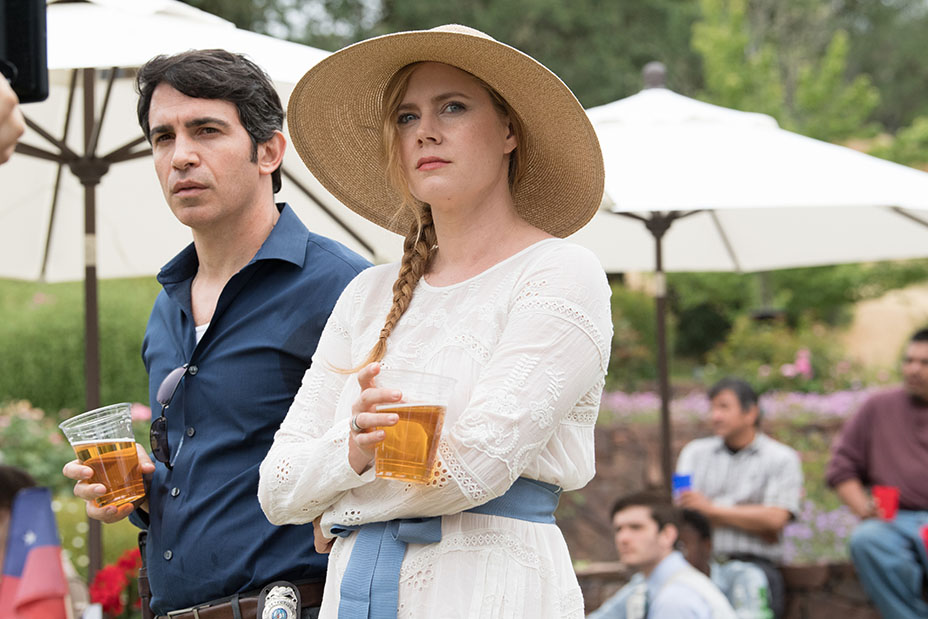 Said Biscoe, who was Adams’ makeup artist for the shoot and helped apply the scars, “A lot of the challenge too was making sure that everything was legible to the viewer, but then at a lot of times it also had to be concealed from the characters within the scene. So it’s kind of a lot of mapping and choreography, physical blocking and going into where theses scars were going to be on Amy’s body.”

It was a work in progress, she explained, because not only were she and Morot mapping the scars while the show was still being written, but they were also figuring out what formula of the adhesive worked in hot and humid conditions (or in the bathtub). Plus, on top of the special effects makeup, Biscoe was tasked with making Adams look like a functioning (or not-so-functioning) alcoholic.

“It was really important for us to show that this woman is in pain,” she said. “What’s cool about the scars is that they are a roadmap to her experience and her pain. … The scars aren’t just cuts; they are themselves signifiers and signs. And they are literal. They are meaning. They are a meta narrative also. They are another narrator to this story. And her face makeup is the same thing. [Camille] always is in yesterday’s makeup and then just puts more makeup over it. And if she has to look presentable, she wipes under her eyes with a bit of spit and puts on some Burt’s Bees lip balm that she dug out of her pocket, all warm and gushy, trying to cover up what she has been doing or trying to look somewhat presentable as if she were sober.”