The opening narration of Buffy the Vampire Slayer revealed, “Into every generation, a slayer is born,” a mission statement that at first garnered some serious eye-roll. But it was Buffy, and its seven years on air that forever changed the landscape of the sass-talking, demon-hunting, kick-ass lady genre.

In the beginning, its silly title, cheesy effects and Valley girl heroine likely led to its slow burn, and even when it did find an audience that warmed up to its campy premise, they were possibly too embarrassed to admit it. Kind of like Wynonna Earp — Syfy’s, gun-slinging, paranormal-warrior answer to Buffy and The Scoobies slaying in Sunnydale — only this time, no apologies are necessary.

Loosely based on Beau Smith’s IDW comic series that debuted 20 years ago (about the time Buffy hit the small screen), Wynonna Earp was developed for television by Emily Andras (Lost Girl), who also serves as showrunner. While the comic continues to panel stories told in present day Purgatory, with co-writing credit from series stars Tim Rozon (Doc Holliday) and Melanie Scrofano (Wynonna), this younger, stronger, deliciously “quippier” version of Wynonna is all Andras and she welcomes the Buffy comparisons, of which there are many.

An early review of Wynonna Earp mentioned that you had the Joss Whedon playbook open for reference. Do you think that the comparisons to Whedon and/or Buffy helped get eyes on the show?

I think so. When I was pitching Wynonna Earp I said that it was Buffy meets Justified. I truly believe Buffy is the beloved cult hit because it deserves to be. It speaks volumes that 20 years have gone by and we’re still talking about that show. People see it for what it was, which is groundbreaking. I can’t even pretend that Buffy didn’t influence me, but I don’t want to say Wynonna is derivative. I hope it’s not. Joss really taught me what an action heroine could be, which is a completely three-dimensional girl or woman with all those complications who can also kick butt.

In the beginning, both Buffy and Wynonna are reluctant heroes. They’re tasked with a responsibility that neither wanted, but both come to love and sometimes need.

For Wynonna, we make no bones about it that she’s a pretty big fuck up. I don’t know that she’s done anything right her whole life. Even though this was a job that was thrust upon her, and this is a destiny she didn’t ask for, there’s no denying that Wynonna is exceptional at it, and she finds meaning in that. I think that’s true of a lot of women. Not to reduce Wynonna Earp, demon hunter and Earp heir to a job, but I like that storyline. I like that she has found meaning in her work, so to speak, and feels validated by the fact that she’s really good at it.

Exactly. But with a slightly bigger boom. The thing we do with Peacemaker, which I enjoy, is if you think of it as a horse we’re kind of winking at the Western. It’s almost as if it has a personality of its own and it’s not always obedient. It seems to have its own moral code and its own agency. I like the push/pull. She has a real relationship with it.

Much like Buffy, there’s some apologizing that goes along with admitting to watching Wynonna Earp. But if online fandom reveals anything, it’s that there’s an audience, and that audience is starved for strong, well written female characters. What do you hope viewers takeaway from the show?

Look, it’s a big concept, and it’s almost a hard sell. The title is slightly ridiculous, and the budget is like, $10. It’s a lot like Buffy in that way. I always say, you can see the zipper up the back of the werewolf’s costume. The one thing that I strive to emulate from Buffy above everything else is that despite its camp factor and its low budget, it really was about something — about being a woman in the modern world and carving your path and making your own family. You can enjoy Wynonna for both things. I don’t apologize for anything. Especially in today’s political landscape. I think about people who come home after a long day working, and there’s no shame in turning on a show that is pure escapism, that makes you feel joy and laugh out loud, and cry. And maybe make you feel a little empowered for 42 minutes. I want to show that there is more than one type of woman in the world, and there is more than one type of a way for a woman to be a hero. I really relate to people that have struggled to define themselves and to become who they want to be versus what society thinks they should be. It’s something I’ve fought against my whole life, and I think that’s why I feel so passionately about representing good LGBTQ on TV, as well. Obviously, the LGBTQ community is one that never sees themselves represented in a way that feels real and fresh and diverse. It’s time that our entertainment delivered real characters to us wherever possible. I just want people to feel inspired. I don’t care which character on Wynonna Earp inspires you because I think they’re all flawed and heroic in a different way. The way that people have embraced Wayhaught is huge to me, the sister relationship is huge to me, the bromance is huge to me. I tricked everybody and wrote a sci-fi show and then added a billion female characters in the traditional male roles, and it seems to be working. 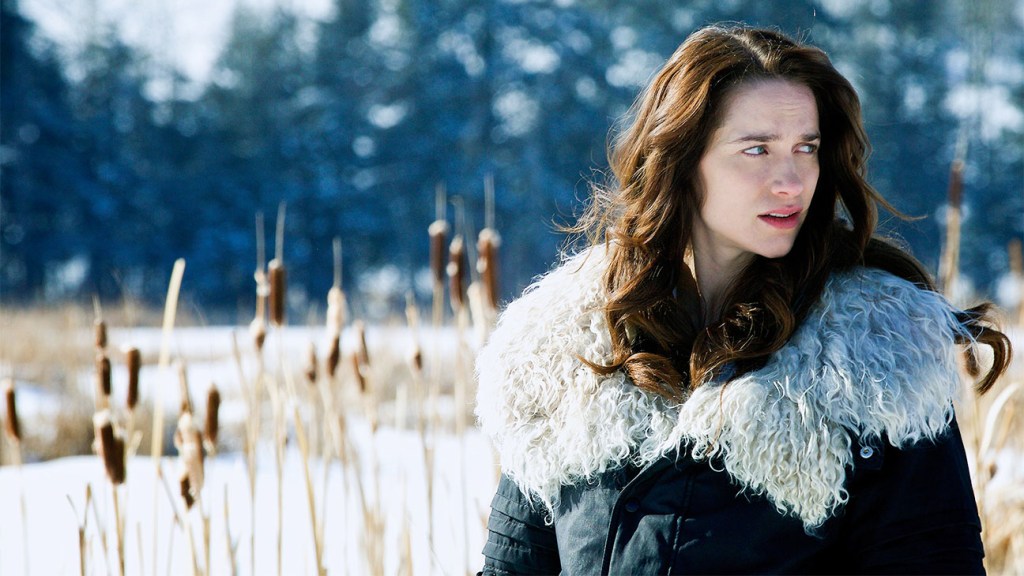 Wynonna Earp is full of quips. Did you have any idea when you cast these actors that they could deliver your one-liners so well?

It was such a surprise. There are a few shows that talk about this. Obviously, Buffy is a good example. I knew that Melanie [Scrofano, who stars as Wynonna] was very funny and witty, but to be completely frank she was quite nervous in the audition. What I realized is that she’s very much like Wynonna. Tim [Rozon, who plays Doc Holliday] was one of the biggest surprises for me. I had worked with him before and knew how gorgeous he was and how good he was at certain things, but Doc Holliday was such a critical role that I just didn’t see him in the part. But during his audition he became Doc Holliday. He has said unabashedly that he believes it was the role he was intended to play. It’s complimentary about himself but it’s also true. Shamier [Anderson, Agent Dolls] doesn’t get enough credit for playing the “straight man” all of the time. He’s kind of the Giles [Anthony Stewart Head], right? Everyone else is running around and getting all the fun and romance. Someone has to be the grownup of the group and sometimes the comedy from Shamier comes from him being so dry and staring at every wondering, What the hell are you guys talking about? A big surprise this season, which I don’t think people have seen the extent of yet, is how hilarious Kat Barrell is [as Nicole]. That’s one of the things that’s warmed my heart this year. I had no idea how much this cast was capable of, but it has been beyond my wildest dreams, so we keep pushing them.

The online fandom, lovingly referred to as Earpers, are dissecting scenes, analyzing hand placement and making gifs four minutes after every “Wayhaught” scene.

They’re zooming in and looking at backgrounds, graffiti, outfits…

And there are Twitter handles for pieces of furniture and body parts.

Every body part of Nicole Haught has a Twitter handle. It’s hard for me to explain to people. As an artist and as a goof, how gratifying is that? That people are so in love with it that they appreciate the time and care we put into it. The online community has probably been my favorite part of this experience. When everybody’s live-tweeting together on Friday night … People love this show, but they’re also making fun of the campiness and joke about it, and it’s a safe place for us to do that. We can still be critical and tease each other about this thing we absolutely love. They’re so passionate and dedicated, and I think that’s what helped our show stand out in such a crowded landscape. Again, this is an underdog show, and it’s a hard concept to spout on Fridays at 10 p.m. I’m just really happy that it’s being judged on what it is as opposed to what it should be. I could spend the rest of my life with the Earpers. I’m so proud of them, and so lucky to be a part of it. 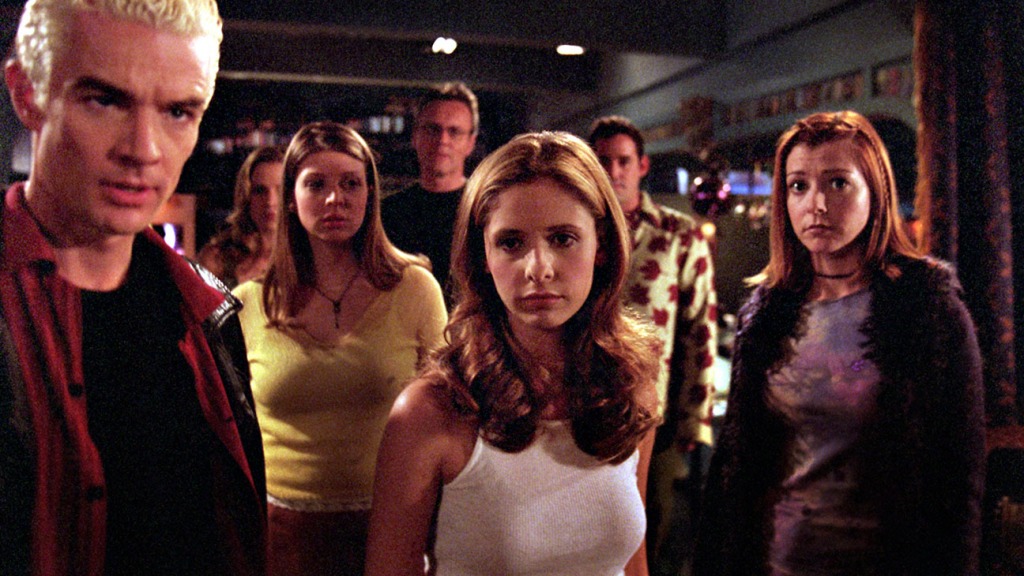 You need to get to at least season 6 for your Buffy-inspired musical episode. Do you think Wynonna Earp could ever possibly go there?

Tim was on a show called Instant Star where he played a boy band manager. Obviously Dom [Provost-Chalkley as Waverly Earp] can sing as we’ve seen on an episode, Mel has a beautiful voice, Shamier is an incredibly talented singer and I believe dancer. I think Kat Barrell can sing, and if not, we can help her like they helped Amber Benson who was so shy on Buffy. And if not, she can rap. Full Haught gangster rap. With Nedley.

That Twitter handle is being secured as we speak.

Nicole Haught’s Microphone. The one thing I will say is that the musical episode of Buffy is so beloved, and the bar is so high that it would have to be really well done. Joss Whedon, can you write it for me? Thanks.