The producers behind The Bachelor had vowed to do better when it came to diversity and representation on their hit ABC franchise. “We are taking positive steps to expand diversity in our cast, in our staff, and most importantly, in the relationships that we show on television,” the executive producers said in the summer of 2020. “We can and will do better to reflect the world around us and show all of its beautiful love stories.”

That joint statement came amid the country’s racial reckoning and renewed public outcry for The Bachelor franchise to diversify its majority white reality television series of nearly 20 years. But eight months later, after a celebrated season of The Bachelorette and with the historic cycle of first Black Bachelor Matt James underway, The Bachelor is once again facing a racism controversy.

How did this happen?

“Casting a diverse set of contestants is one step, but the next is actually showing them,” says Suzana, the longtime viewer who runs @BachelorData. The emerging Instagram account, which launched one year ago, has been regularly cataloguing, in illuminating chart form, on-air disparities for white contestants and contestants of color. As the show’s missteps received renewed criticism, the account has helped to spark a dialogue around how screen time impacts representation. “My goal is to be able to look at screen time and race representation. What are we seeing on our screens and how are we reacting to it as a society that watches the show?”

Suzana, who wishes to be identified by her first name to maintain privacy, is a technology director for a school district who started manually tracking and analyzing show metrics in her free time, beginning with the 2019 seasons. She and a small but growing team work in spreadsheets that are updated daily with Instagram follower counts and weekly with episode screen time for each current contestant. Recently, they have also begun tracking the tone of the segments to see how cast members are “being leveraged” by the show for different storylines.

“I wanted to learn how to use spreadsheets better,” Suzana, who has been tuning into the series since 2010, tells The Hollywood Reporter of what motivated her to begin this venture around The Bachelor franchise. “At the time, nothing sounded worse to me than an Excel class. And I’d always been interested in what happens on the show and really being able to quantify how America reacts to it. So I started tracking Instagram followers for Colton Underwood’s 2019 Bachelor season about two weeks before it started airing and posting about it on Reddit [before launching on Instagram in 2020]. Through that season, I learned different aspects of how to use spreadsheets and then slowly started moving into data visualization.”

One of the first trends that Suzana noticed was how social media growth was impacted by a contestant receiving a one-on-one date during an episode. “But Tayshia [Adams, during Colton’s season] was the first outlier,” she says. “She got a one-on-one date and didn’t stick out in terms of growing in Instagram followers. That was one of the first race-related trends that we were able to point to and that’s really propelled me to keep moving forward with it; finding out ways that I could quantify what’s happening on the show and its viewers and how that all intertwines.”

Historically, white contestants on the franchise have a higher following than people of color and “that goes for every single season,” she says, having tracked the data to prove it. As shown in her charts, which are often broken down by race, there is a direct social response to when contestants appear on the show. “If somebody is on all the way to week six and hardly shown, of course America is not going to show up to follow the contestant. Because they don’t know who the person is,” says Suzana, highlighting a major point of frustration viewers have shared about the current season. Namely, that there was a historic number of contestants of color who were cast, but who are not being featured as main storylines. And that gripe is only growing louder following the firestorm that erupted over recent comments made by Chris Harrison. 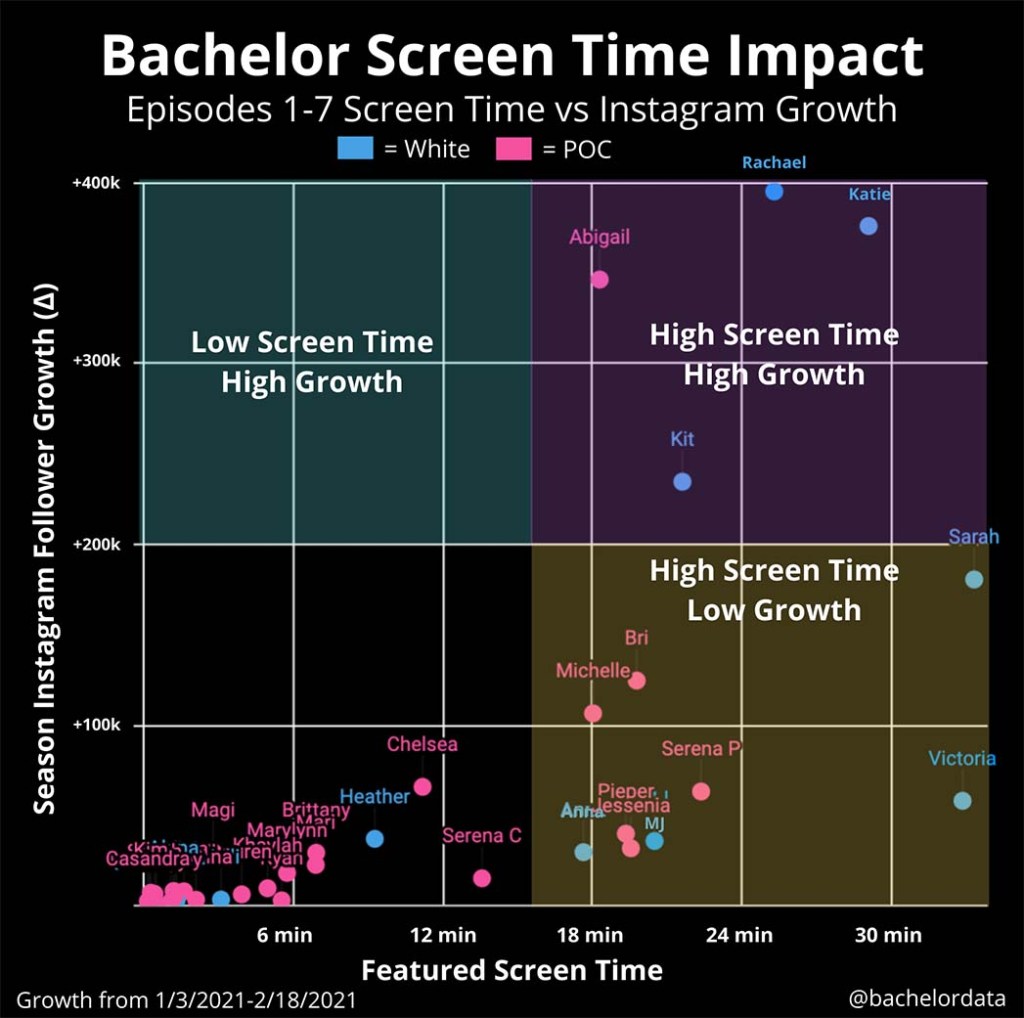 The wheels of change had been in motion. The Bachelor cast its most diverse season in 19 years with James’ cycle, which debuted Jan. 4. Of the 37 total cast members, 25 of those women identify as BIPOC. The season followed a diverse showing from The Bachelorette, which was co-led by the first Black and Latina Bachelorette, Tayshia Adams. Behind the scenes, more producers of color were hired and a diversity team was brought on to work with the cast and crew.

But on Feb. 9, the Harrison controversy cast a cloud over those changes when the longtime host and executive producer refused to condemn racist allegations about a contestant who has emerged as a frontrunner, Rachael Kirkconnell. Harrison’s defense of Kirkconnell, which took place during an interview with the franchise’s first Black Bachelorette Rachel Lindsay, has since sparked debates on race among Bachelor Nation, with many show alum once again demanding change, action and accountability. A campaign for antiracism in the franchise launched a petition to remove Harrison; more than 40,000 have signed.

During this pivotal moment for the reality juggernaut, @BachelorData is gaining traction (the official account for the Bachelor producers is among the 44,000 followers). The data reveals a 2021 season that was dominated by white contestants who made up for most of the show’s drama. For instance, heading into the Feb. 22 episode, James’ final three contestants of color — Serena P., Bri and Michelle — had each been seen by viewers for barely 20 minutes in total after 14 hours of run time. Meanwhile, eliminated contestants Sarah, Victoria and Katie top the chart. (@BachelorData defines featured screen time as who is featured on the screen during a segment, with segments lasting anywhere from two to 30 seconds.)

“A lot of people will say this season was a lot of white contestants having drama and that’s why their screen time was so high. But that’s not what the executive producers committed to — they committed to showing diverse romantic stories,” Suzana notes of the show’s inclusion statement from 2020. “[The data is] really holding them accountable. I love this show and I want it to stay on the air. I stand behind the Bachelor Diversity Campaign that if they’re going to commit, they need to be looking at data themselves. And I hope they really start to look at screen time because that’s a big indicator. Are they truly showing us positive, romantic storylines? Like we saw during Tayshia’s season, there are really powerful stories that can come out when you cast and show a diverse cast.” 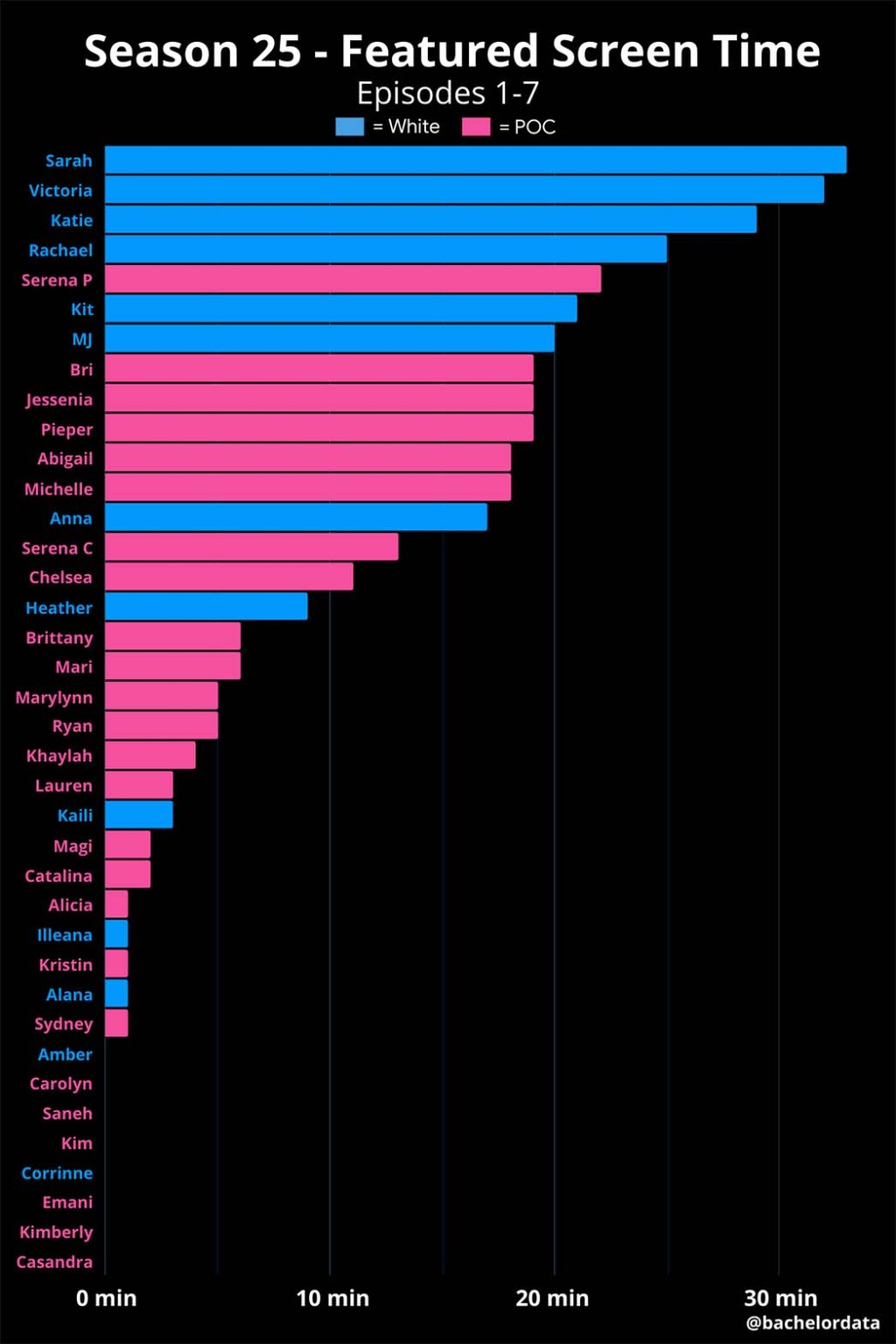 Now, with less than a month before The Bachelor‘s live finale, ABC and show producers Warner Bros. TV are grappling with how to salvage the season. With Harrison on hiatus, a replacement host has yet to be named for the live After the Final Rose show, which is set to draw even more eyes after James’ recent statement (he called the post-filming developments “devastating and heartbreaking to put it bluntly.”)

The calls for renewed action have also grown louder amid silence from the franchise. As of the Feb. 22 episode, Harrison is still appearing during the pre-taped season, which will include the upcoming Women Tell All reunion show that was filmed just ahead of the controversy; neither of the two episodes that have aired since his interview addressed the ongoing situation. With Kirkconnell absent from the reunion show and remaining as a top three finalist after Monday, the After the Final rose will presumably be her first opportunity to address the racism controversy on a televised stage.

Noting an uptick in followers for both Harrison and Kirkconnell following last week’s news cycle, Suzana says she’s interested in seeing how Bachelor Nation will continue to engage heading into the live finale. “Something that you can definitely attribute that [Instagram growth] to is people following to see what’s going to happen next,” Suzana says of high interest around the host and contestant. “There are different reasons why people could be following; sometimes there’s a small uptick whenever someone is in the news and then it slowly drops off in the weeks after. That’s what I’m really looking forward to seeing in the data: how will viewers react in the coming weeks in terms of following these people?”

A boost was also extended to several franchise stars of color who have spoken out, including James, past leads Lindsay and Adams, and several contestants from the current season. “That was really exciting to see,” she says. “It was great to see people lifting up those voices when the Bachelor franchise didn’t.”

A version of this story first appeared in the Feb. 24 issue of The Hollywood Reporter magazine. Click here to subscribe.