Shonda Rhimes’ first series under her nine-figure Netflix deal has arrived and it’s as steamy as Meredith and McDreamy’s early days on the prolific producer’s mega-hit, Grey’s Anatomy.

Bridgerton is an adaptation of the hugely popular regency romance novels by best-selling author Julia Quinn. The lavish soap arrives 20 years after the first book in the now nine-title series arrived and helped further propel Quinn into an award-winning author with 19 appearances on the New  York Times best-seller list. The period drama stars Shondaland alum Regé-Jean Page (ABC’s For the People), Phoebe Dynevor (Younger) and the voice of Julie Andrews as Lady Whistledown, the unseen narrator whose gossip column sets early-1800s London society atwitter. (Andrews, it’s worth noting, also reunites with Rhimes after the duo teamed on The Princess Diaries.)

So, how did a beloved romance favorite like 2000’s The Duke and I, which spawned 11 more best-selling sequels, wind up being adapted for television? Like most of Bridgerton‘s ardent fanbase, Rhimes read the novels and fell in love.

“I remember I was almost scaring people, like, ‘We have to get these crazy romance novels — they’re hot and they’re sexy and they’re really interesting,'” Rhimes told The Hollywood Reporter in an October cover story.

Four years ago, when Quinn’s agent called and said that Rhimes — the prolific showrunner behind hits including Grey’s and Scandal — was interested in buying the rights to the Bridgerton books, the author instantly said yes. As she told Shondaland.com, “One of the first things that people ask you, both when you go into the negotiation process for optioning and afterward — are you willing to hand over creative control? Or did you give up creative control? And you know, when they asked me, I said take it. And that’s because it was Shonda Rhimes! I’m not going to tell Shonda Rhimes how to make television, you know? She’s basically the smartest, most successful person out there and I couldn’t imagine doubting her in any way.”

Rhimes then turned to her former Grey’s Anatomy writer and Scandal grad Chris Van Dusen to oversee the series that would become her streaming debut. He was looking for a new project as the ABC fixer drama starring Kerry Washington was drawing to a close, and Rhimes gave him the books to read.

“I was instantly intrigued,” Van Dusen tells THR. “I took them home and I just devoured them. I read the first book that first night, the second book the next night, and so on. They had every element I always love and I always look for: they were funny, they were sexy, they were emotional, they were really charming. And there was this delightful family known as the Bridgertons at the center of them all.”

While some romance novels have been adapted for the screen, it’s not necessarily a genre that has gotten its due on film. Even Outlander, which was also based on a popular book series featuring steamy sex scenes, is just as much sci-fi and historical fiction as it is romance.

As Quinn told Shondaland, “It’s no surprise that [Rhimes and company] would look past prejudices the romance genre has and say, ‘Hey, this a great story,’ because they’re all about storytelling. But I think people really haven’t looked to romance novels as viable adaptations in part because there is some stigma around them — they’re by women, for women, primarily edited by women. More specifically, I think historical romance has been passed over because of the expense. Historical romance is going to be expensive to do, and unlike most contemporary stories, if you wanted to do a big period piece, you could go with a classic with prestige attached to it.”

But with a mega-deal at Netflix, Rhimes insisted — even to skeptics like longtime Shondaland producing partner Betsy Beers and Netflix co-CEO Ted Sarandos — that the series had streaming hit potential. (And, as Beers admitted to THR in October, “I was clearly, totally and absolutely wrong.”)

There were two main elements Van Dusen wanted to make sure translated from the page to the screen: first, “to capture the essence of the Bridgerton family and feel their warmth and feel their love.” And second, to capture the “moving, sweeping romance” of Daphne and Simon’s love story.

But the show was never really just about the Bridgertons for Van Dusen, particularly because he wanted to make sure that the world of the series would be as sprawling and inclusive as possible. So the first season lays the groundwork for the love stories of many characters, not just Daphne and Simon, and the character of Queen Charlotte (Golda Rosheuvel), who is Black, helped open the storylines the series could tackle. 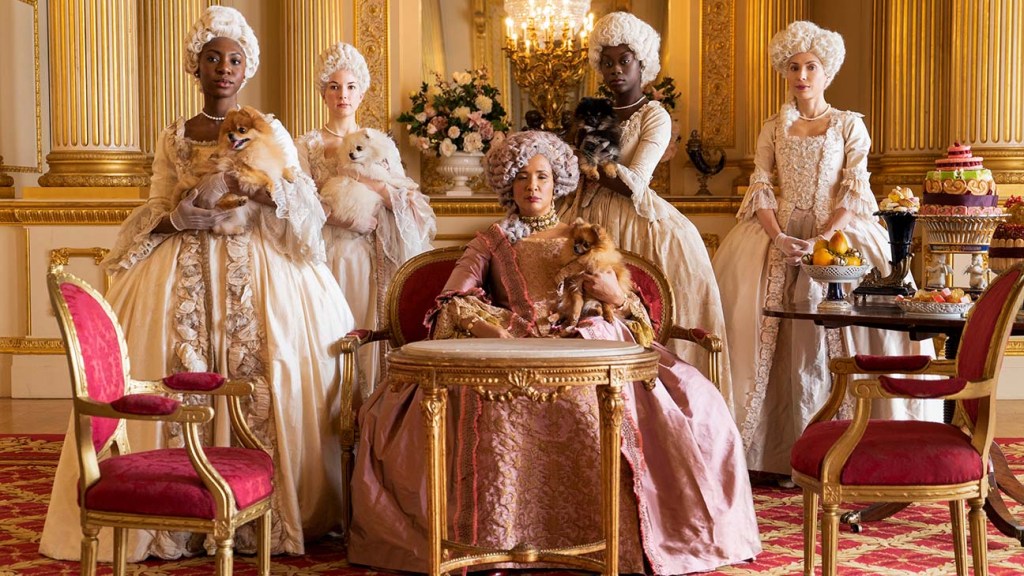 “Underneath all the glamour and the lavishness in this beautiful escapist world, there’s this running modern commentary about how in the last 200 years, everything has changed but nothing has changed for both women and men. So exploring those modern themes were important. And also, I wanted the show to reflect the world that we live in today. We’re set in the 19th century, but we wanted modern audiences to relate to it and I wanted modern audiences to see themselves on screen. Our approach to race is one example of that. I don’t refer to the show as being colorblind. Race isn’t really talked about in the books or considered in the books, but I don’t think that’s true for Bridgerton the series. Color and race is a part of the show, it’s a part of our conversation, just like things like class, gender and sexuality are.”

And while the first season focuses on eldest daughter Daphne, there are eight siblings and Van Dusen hopes that, in success, he’s able to explore romances and love stories for all of them.

There is certainly a plan already in place for subsequent seasons, should Netflix order some, but fans of the source material should not worry — just because Daphne and Simon’s story is the center of the first season doesn’t mean they wouldn’t return for more.

Says Van Dusen, “I would love to be able to see them again and also at the same time explore the other brothers and sisters of the family.”

Bridgerton is now streaming on Netflix.