At 11:24 a.m. ET Saturday, the call came in: CNN was the first news outlet to project Joe Biden as the winner of the 2020 presidential election, putting Pennsylvania into his column and pushing him past 270 electoral votes.

Several other networks — NBC News and MSNBC, ABC and Fox News — followed suit over the next 15 minutes, projecting the former vice president had defeated incumbent Donald Trump. Their projections ended a five-day waiting game during which several key states counted millions of ballots, and millions of people tuned into news channels each night for updates.

Here’s how the past five days played out on TV.

Election Night: No Winner Yet

News coverage of the vote count carried well past midnight, with at least half a dozen states — Wisconsin, Michigan, Pennsylvania, Arizona, Georgia, North Carolina and Nevada — too close to project a winner. The popular vote count was close, and Biden ended the night with a consensus lead of 227-213 in the Electoral College.

Fox News, however, had put Arizona in Biden’s column earlier in the night, based on its modeling of ballots that hadn’t been counted yet. The decision drew fire from both the Trump campaign and the channel’s right-leaning opinion hosts. As of publication time, no other news organization has called Arizona, and the race there has tightened, though Biden still leads. About 57 million people watched election coverage in primetime.

The next change in the race  came about 2 p.m. on Wednesday, with CNN being the first to call Wisconsin — one of three states that flipped to Trump in 2016 and helped carry him to the White House — for Biden. The Associated Press followed suit 16 minutes later, and NBC News and Fox News made their projections within the next half hour. Everyone noted at the time that the Trump campaign was requesting a recount in the state, which Biden ended up winning by a little more than 20,000 votes.

Two hours later, CNN and NBC put Michigan and its 16 electoral votes in Biden’s column, with ABC News, CBS News and Fox News following 10 to 15 minutes later. At the end of the day, the unofficial electoral count stood at 253 for Biden to 213 or 214 for Trump, with some networks holding off on putting Maine’s second Congressional district for the incumbent.

North Carolina election officials, meanwhile, announced that it wouldn’t finish counting its absentee and provisional ballots until at least Nov. 12. Trump currently leads there by 76,515 votes.

No media outlets projected a winner in any additional states over the next two days, although as Biden narrowed Trump’s leads in Pennsylvania and Georgia, Trump inched up on Biden in Arizona and Biden opened up a slightly wider lead in Nevada, the likes of CNN’s John King, Fox News’ Bill Hemmer and MSNBC’s Steve Kornacki put in more long shifts in front of their “magic walls” showing the electoral map.

Biden moved into the lead in Pennsylvania early Friday, at the same time the Trump camp was preparing a series of legal filings challenging the vote count in the state, which didn’t allow mail ballots to be opened until Election Day. Georgia also moved very narrowly to Biden on Friday, but it’s so close that the state will do a recount of its votes. (As of Saturday morning, Biden led the state by 7,200 votes out of more than 4.9 million counted.)

A short order from Supreme Court Justice Samuel Alito on Friday made some news, but its direction to sequester ballots that arrived after Election Day only served to reinforce what local election officials were already doing. Alito’s order did not direct officials to stop counting ballots, which the Trump camp had sought. 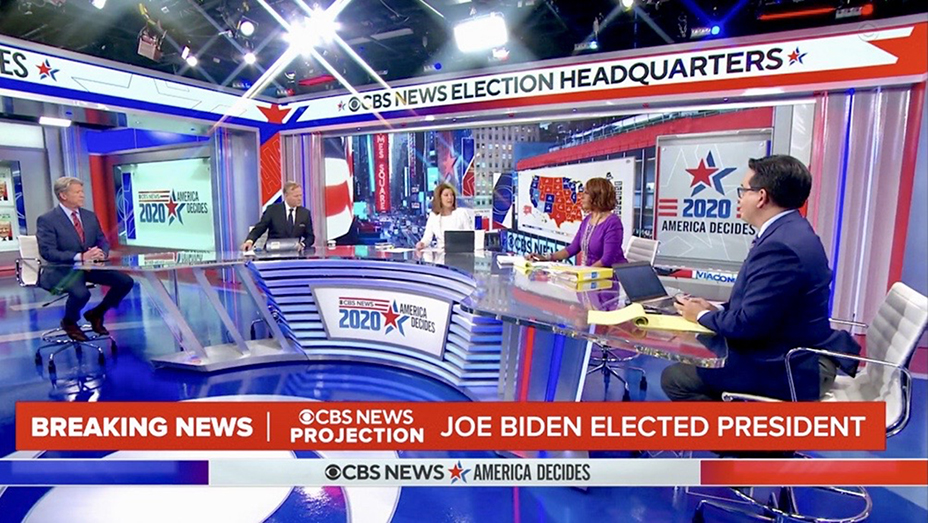 As the Trump legal team, led by Rudy Giuliani, was setting up a press conference (outside a landscaping company, for some reason) in Philadelphia, CNN called Pennsylvania for Biden at 11:24 a.m. NBC, CBS and ABC followed suit within two minutes, the Associated Press came at 11:28 and Fox News moved the state to Biden at 11:40.

They all project Biden to win the state’s 20 electoral votes, which would put him at 273 — enough to become the 46th president of the United States, with Sen. Kamala Harris becoming the first woman and first woman of color to be vice president.

News networks soon were showing video of celebrations in Washington, D.C., Philadelphia, Atlanta and Wilmington, Delaware, where Biden lives, over their talking heads. The broadcast networks broke into their morning lineups for the call, reverting back to regular programming after an hour or so, while cable news remained fully on the story throughout.

Vote counts are still ongoing in Arizona, Georgia, Nevada, North Carolina and Pennsylvania (and Alaska, where Trump has a commanding lead), but the media outlets are confident enough that Biden’s lead will hold. Biden also holds a national popular vote lead of more than 4 million as of publication time.

Van Jones in Tears on CNN: "This is Vindication For a Lot of People Who Really Have Suffered"