The first season of Lifetime’s marquee scripted drama UnREAL premiered to near-universal accolades. But the second season of the series, which follows the goings-on behind the scenes of a Bachelor-esque reality series, drew plenty of criticism. Season two, which introduced a black suitor — something ABC would echo months later by casting its first-ever black Bachelorette in Rachel Lindsay — ended with UnREAL‘s two anti-heroines, unscrupulous producer Quinn (Constance Zimmer) and her morally conflicted protege Rachel (Shiri Appleby), covering up two deaths caused by their cold-hearted meddling.

It’s been more than a year and a half since UnREAL‘s second-season finale, but the third season picks up months later. Show-within-the-show Everlasting is on the brink of cancellation, and Rachel is on her latest quest for self-actualization — that is, until Quinn pulls her back into the web for her newest idea to save the show: a female suitor (played by Master of Sex’s Caitlin FitzGerald). A single and successful business woman, Serena promises to give Everlasting producers a run for their money.

Ahead of its third season debut — Lifetime has already renewed UnREAL for a fourth season — co-creator and exec producer Sarah Gertrude Shapiro and showrunner Stacy Rukeyser spoke with The Hollywood Reporter about tackling feminism head-on in a Donald Trump world, season two criticism and whether the show will address the Bachelor in Paradise controversy that shut down production on the Bachelor spinoff’s summer staple.

What did you want to do with a female suitor that you couldn’t before?

Stacy Rukeyser: I think that a lot of it was what kind of a female suitress we chose, that she is this smart, strong woman. She’s not a demure kindergarten teacher. And, we started writing this back when everybody thought that Hillary Clinton was going to be the next president of the United States.

Sarah Gertrude Shapiro: It’s so funny, we literally had a pitch where we were like, “Yeah! So, in the Hillary climate…”

Rukeyser: We saw the vitriol that Hillary Clinton had to deal with on the campaign trail, and it became very clear to us that a smart, strong woman is the scariest thing in the world to a lot of America. Why is that? And why is it that so many women that we know in our own personal experience of doing really well at work, climbing up the ladder, everything’s going great, except it’s becoming harder and harder to find a partner, and why is that? This suitress decides to go on a reality show to find a husband. I mean, she honestly is there to find a partner — she is willing to do and try anything. That gives us a chance to sort of reflect on our own characters, because Quinn is dealing with the fact that she can’t have children, and how she, perhaps preemptively ended her relationship at the end of last season because of that. And I think Rachel chooses Serena as this suitress to sort of prove to Quinn that she is lovable; that you can be both things.

Shapiro: And I think what’s a great opportunity about having a female suitress, or the opportunity that it provides, is for both of our characters to have this really fucked up avatar that they put everything onto. Rachel is really excited to have a feminist suitress because she thinks it’s going to elevate feminism in the minds of America. Quinn is dubious about it. Poor Serena sort of becomes a doll for them that they’re moving around and playing with. 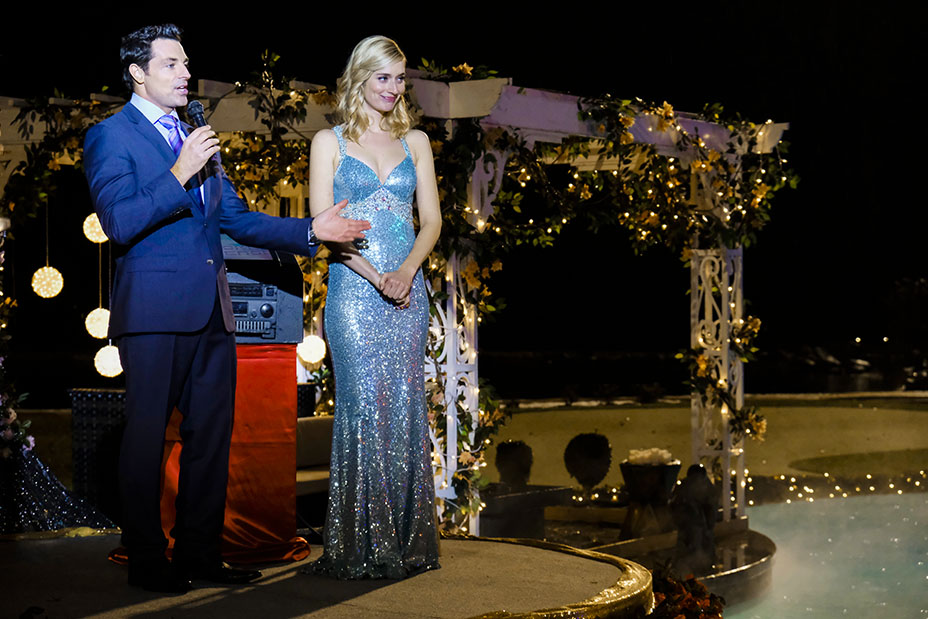 Did you have to reframe what you were doing when Donald Trump won?

Rukeyser: We didn’t have to reframe it. I mean, at that time there was this hope that we, that these issues wouldn’t be issues anymore. It was like, “Are we really dealing with these things anymore? Because Hillary’s going to be president, and so everybody seems to be cool with a smart, strong woman.” And, we absolutely thought that they were still issues, even if Hillary had become president. But the fact that Trump won and all of these other things about our country were exposed, I think only made it more relevant. But we were on board and going by then.

Shapiro: We actually had a meeting at the network the day after the election. We had been having these notes calls where we really had been discussing the nuances of it, like, “Are we hitting it too hard? Is it a little heavy handed? We’re going really straight at the feminism thing, do we need to do that?” And then we came in that morning and everybody in the room, all women, were like —

Shapiro: “I guess we’re right on time.” I mean, it was just sort of stunning to us. I don’t think we ever thought that it was not relevant, but to find that it was even more relevant than we thought.

Season two received plenty of criticism. Did you make any changes in how you approached season three with some of that criticism in mind?

Rukeyser: Not really. We are still proud of the second season. We took some really big swings and we definitely wanted to go for it in terms of what we wanted to look at, in terms of the cultural conversation, but there were a lot of things that happened in the plot that we knew we had to deal with the emotional and character repercussions for the third season. That was actually a really exciting opportunity, to really sit with what Rachel, perhaps, produced Jeremy to do [he caused a car accident that left two people dead]. Did she produce him to do that? Did she not? What is her own responsibility within that? What is it like for all of them, this work family, to have this secret? Also for Rachel, this season Quinn hires a new shrink for her, and it’s because she’s worried about her, but it also provides a real opportunity for Rachel to start looking at herself, and look at where her own darkness comes from. That table was set by everything that happened in season two, and that’s a really exciting opportunity.

Shapiro: We definitely heard the criticism. We observed it, we listened to it, we heard it. But I don’t think we were going to swing less. We were still going to learn from some of the missteps. TV’s a really collaborative process. It was really complicated in season two. We feel good about where we’re at for season three.

When did you write and shoot season three?

Rukeyser: We started shooting in February of last year, and then we finished post [at the end of the summer]. We all thought we were going on summer vacations, but they picked up the show for a fourth season right away.

So the Bachelor in Paradise controversy [where production was temporarily shut down after a producer complained about misconduct] had not happened yet. Do you have plans to try to address something like that?

Rukeyser: I don’t watch The Bachelor, and I don’t think [Shapiro watches] either. But there are a couple of things we hear about because they come into the conversation. One was that they did finally have an African-American bachelorette for the first time, after our season 2, and the other one was that a producer made a complaint to the studio. Those things were interesting to us. They certainly went into our minds, and yes, we’re very excited about season 4 as well.

The past few months have seen the Time’s Up movement take hold. Is that something you plan to address in season 4?

Rukeyser: I feel like we were already on a train with what we were going to be writing for the fourth season and what we’re dealing with. We really start in the seat of our characters, and the heart and soul of Rachel and Quinn, and what are they dealing with? As opposed to working from the outside of, like, how are we going to talk about #metoo, or something like that? That’s not how we’re dealing with it. I think that our show is more buzzy and relevant than ever, I’ll put it that way. 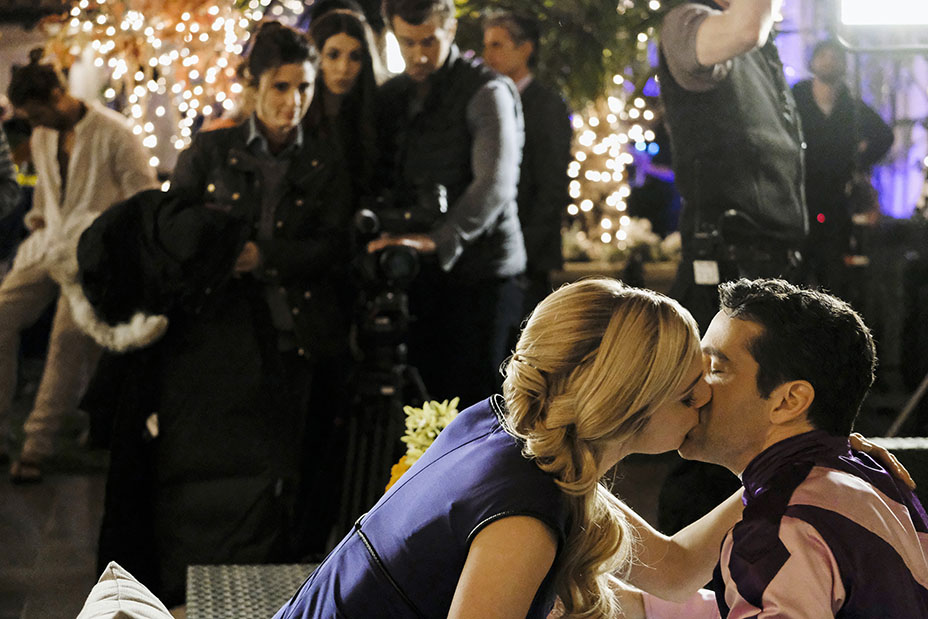 Shapiro: Yeah, and I feel like a lot of the issues that are buzzing around in the industry right now are issues that we’ve been really extremely passionate about and writing about for a while. We’re so, so happy that the conversation is coming to the forefront. There was a TED talk I did about being a female director and a lot of it was about the microaggressions and the way people are cut down and disempowered and made to feel like they can’t speak out. It’s something that, thematically, for me as a creator, and for us as a show, we’ve been dealing with for a long time.

Do you want the show to continue beyond these four seasons?

Shapiro: We would love it. We love Quinn and Rachel.

Rukeyser: We would love to keep doing the show as long as we can.

Is there a message you want to send with the third season?