[This story contains spoilers from The Walking Dead episode 713, “Bury Me Here.”]

AMC’s The Walking Dead, now on the home stretch of its seventh season, paid homage to its past during Sunday’s deadly episode, which also featured a rather fitting family connection.

During “Bury Me Here,” Morgan (Lennie James) learned that there is only so long he can hold on to the peaceful Zen that came from his strict no-kill policy, when outspoken Kingdom soldier Richard (Karl Makinen) takes matters into his own hands and sabotages their latest drop. The group’s tardiness and short supply haul — both intentionally caused by Richard — make matters worse with the Saviors given their already tense relationship. But rather than shooting Richard — who had literally dug his own grave — the Saviors instead shoot young Benjamin, Ezekiel and Morgan’s protege.

Despite rushing Benjamin to Carol’s cottage, the group’s efforts to save him fail and his death sends Morgan into a spiral of sorts reminiscent of The Walking Dead‘s critically praised season-three episode “Clear.” As Morgan copes with Benjamin’s death, he sees visions of his past — namely of his son Duane (originally played by Adrian Kali Turner).

Furious about a death that could have been avoided — as well as a loss that hits very close to home — a grieving Morgan winds up beating Richard to death. As he explains what happened to Ezekiel (Khary Payton), Morgan goes so far as to mistakenly call the late Benjamin “Duane,” a reflection of their bond and the fatherly role he had taken in training him.

Benjamin’s death winds up bringing Morgan full circle and serving as a turning point. It prompts him to tell Carol (Melissa McBride) about Glenn’s (Steven Yeun) and Abraham’s (Michael Cudlitz) deaths. It also adds fuel to the fire with Ezekiel and finally convinces the leader of the Kingdom to join forces with Rick (Andrew Lincoln) in his upcoming battle against Negan (Jeffrey Dean Morgan) and the Saviors.

The episode concludes when Carol, now firmly back at the Kingdom, joins Ezekiel’s and Benjamin’s kid brother, Henry. The episode ends with Carol, Ezekiel and Henry — now left without any blood relatives — tending to the Kingdom’s garden.

While Carol’s return to the Kingdom (and seemingly fighting) is monumental for the character, perhaps what’s most compelling about the quiet and subtle scene is that Carol almost has an instant family in Ezekiel — who has not been shy about his romantic interest in her — as well as Henry. Even more interesting is the fact that Henry is played by Macsen Lintz, the younger brother to Madison Lintz — who, as die-hard Walking Dead viewers recall, played Carol’s late daughter Sophia. (Sophia died in season two after getting lost and turning up as a walker in Hershel’s barn, with Rick having to put her down in one of the show’s most heart-wrenching deaths.) 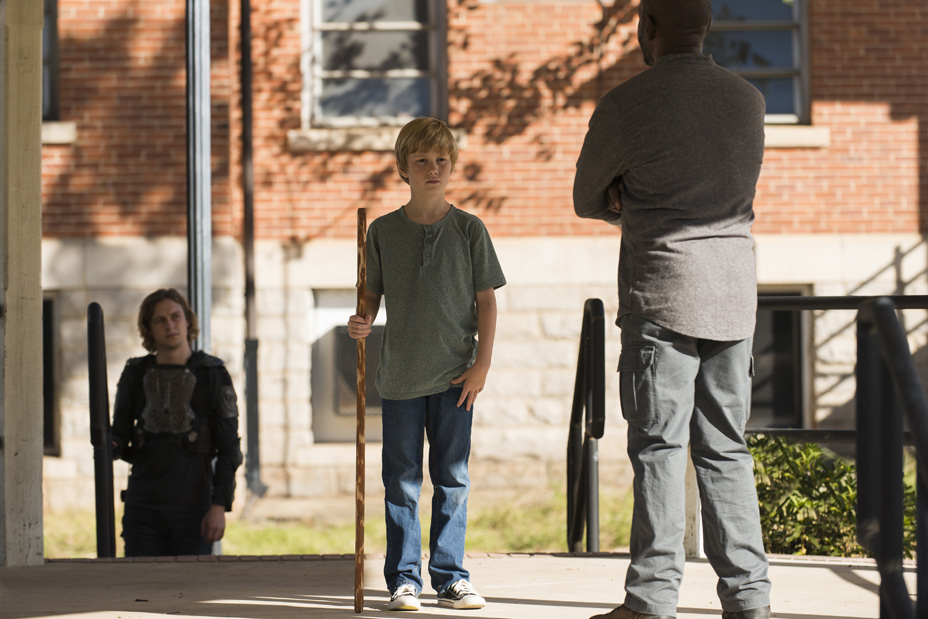 The onscreen and offscreen family connection in Sunday’s episode with Carol and Lintz, as well as Morgan’s flashback memories of his son, further stress just what Rick and company are fighting the Saviors to protect: their loved ones and a world that is safe for the next generation.