Continue to The Hollywood Reporter SKIP AD
You will be redirected back to your article in seconds
Skip to main content
November 13, 2017 6:00am
Logo text

[Warning: This story contains spoilers for season eight, episode four of AMC’s The Walking Dead, “Some Guy,” as well as the comics on which the show is based.]

Even though he walked away from his latest brush against the dead with his head still on his shoulders, King Ezekiel (Khary Payton) isn’t out of the woods quite yet.

During the course of Sunday’s “Some Guy,” the Ezekiel-centric episode written by David Leslie Johnson, the King of the Kingdom nearly loses his life on numerous occasions. He’s one of few survivors of the initial Saviors ambush, the vast majority of his fellow soldiers ripped to shreds with Gatling gunfire. Ezekiel only makes it out of the battlefield alive after he’s helped along by others, friends and an enemy alike. Due to a leg injury, Ezekiel’s story nearly ends in a ravine filled with walkers; however, his faithful tiger companion, Shiva, hops into the fight and loses her own life in service of the king.

Ezekiel survives all of this — and yet, don’t smile: the AMC drama also included an ominous warning about Ezekiel’s future, one that has already come to pass in the comic book version of The Walking Dead from Robert Kirkman and Charlie Adlard.

Earlier this season, we saw a glimpse of a possible future in which an older Rick (Andrew Lincoln) enjoys a peaceful morning with his family in Alexandria. However the show chooses to answer this setup, the comics chart a clear path: following “All-Out War,” the story leaps a few years into the future, where Rick and his allies have actualized their vision for a better tomorrow.

The initial arc following the time jump stands out as the most peaceful period in the comics, until this brave new world comes up against a deadly new enemy: the Whisperers, a group of survivors who wear flesh suits and walk among the dead. In The Walking Dead #144, Whisperer leader Alpha asserts her dominance over Rick, first by showing him the veritable nuclear bomb of a walker herd she has at her disposal, and then with this: 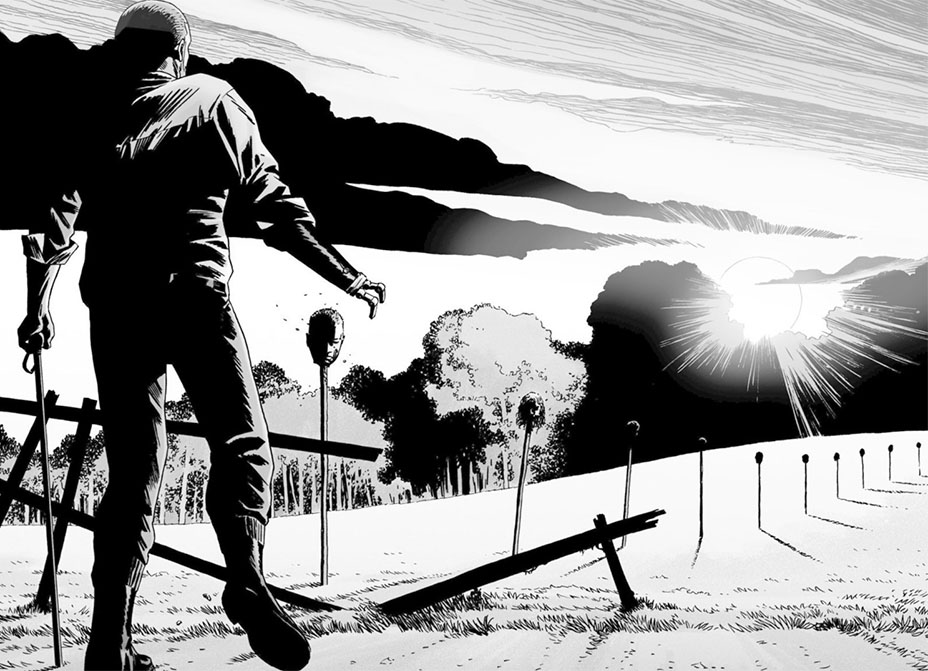 A barrier built with the severed heads of Rick’s friends, skewered on pikes, a testament to the raw power and barbaric nature of the Whisperers.

Even if you haven’t read the Walking Dead comics, the notion of severed heads on pikes might sound nauseatingly familiar. That’s because at the midpoint of “Some Guy,” right before Jerry (Cooper Andrews) hacks his way through Ezekiel’s captor and saves the day, the Savior threatens to sever Ezekiel’s head and put it on a pike. Who knows what’s going to happen in the TV version of events, but the Savior’s threat could prove dangerously prophetic if the show follows the comic book path….

Ezekiel’s head very much ends up on a pike, placed there by the Whisperers, the highest profile victim of this act of violence (followed closely by Rosita, played on the show by Christian Serratos), and easily the most shocking main character death since Glenn in The Walking Dead #100.

Speaking of Glenn, it’s worth remembering the many ways Walking Dead laid track for Steven Yeun’s memorable exit from the show. Over the years, Glenn often found himself dangerously close to a baseball bat: twice in season five, and once more in season six, right after Glenn killed a man for the very first time. While the show often diverges from the comics, it tends to offer up some version of the source material’s most iconic moments — as seen in Glenn’s eventual demise, his head crushed in with a baseball bat.

Like winter, then, heads on pikes are coming, all but promised in the threat to Ezekiel. Whether the king’s own head ends up on one of those pikes is another matter altogether.

“I am aware of what happens in the comic book,” Payton tells The Hollywood Reporter on whether or not he’s worried about meeting Ezekiel’s comic book fate, as officially teased on the show. “But it’s an alternate universe, No. 1. No. 2, it doesn’t change the fact that I’m having a ball playing Ezekiel. If and when he reaches his demise, that’s just the way this show goes. I don’t take anything that is written as anything more than something on the page, until they tell me that my head is dissected, or I’m killed in a different way from the comics. Or I might just hang around as long as Morgan (Lennie James) and Carol (Melissa McBride), you know? You never know.”

What did you think of the latest Walking Dead comic book tease? Follow THR.com/WalkingDead for deep dives, theories, interviews and more all season long.