While the two first met via their mutual BFF Mae Whitman, Graham’s Parenthood co-star, they grew even closer while filming Zoey’s Extraordinary Playlist. Graham plays Joan, the boss and mentor of Levy’s titular character, and was able to give Levy some of her own advice about leading a demanding project.

Filming wrapped on Zoey’s in January, but Graham is back in Vancouver filming the Disney+ Mighty Ducks series, which sees her character coaching her son’s youth hockey team (and yes, film star Emilio Estevez is reprising his role). The actress called The Hollywood Reporter from the set of the Disney+ series to discuss singing and dancing, advising Levy and learning how to ice skate.

You are friends with Jane Levy in real life, but when did you find out you’d be working together?

It began when Jane was thinking about doing the show and I was like, “Oh my God, this is a musical? You have to do.” You could not pay me and have no one watch it and I would show up to sing and dance. When looking for [a new project], it’s been hard to find something that has a lot of the things I like in it and this had a great deal of them: singing and dancing; a mixed, dramedy tone; something with heart that was also funny. It sort of started a little bit as a joke between me and Jane. I was like, “Jane, no one thinks of me as the boss. I’m your fun sidekick maybe.” And then the more I thought about it I was like, that’s ridiculous. I am an actor I don’t I want to stick [to my comfort zone], I want to be limitless in how I take on challenges. I can do this. It took about four seconds before I was like, “sit down, stand up, go, no, don’t do that, here, there.” I just got to channel something that I hadn’t gotten to use.

This character is going through something and she is unhinged at times, but the first thing I said was, ‘I don’t want this to be a rivalry. These are the two women in a tech company, even if I go about it in an odd way, or if I don’t really understand how to be a girlfriend to somebody, I want to be a mentor. I respect the work she does.’ And so that was something we talked about just in terms of what their relationship is, and that it’s fun and it evolves and it goes too far at one point — we go out for a night on the town and I go crazy — but it offered a lot of things I hadn’t gotten to do lately, and I just thought it was so ambitious and fresh and original and also fun to be a guest star. I’ve been lucky to be on shows that ran a long time, but it was fun to think, “oh, I’ll come and visit.” 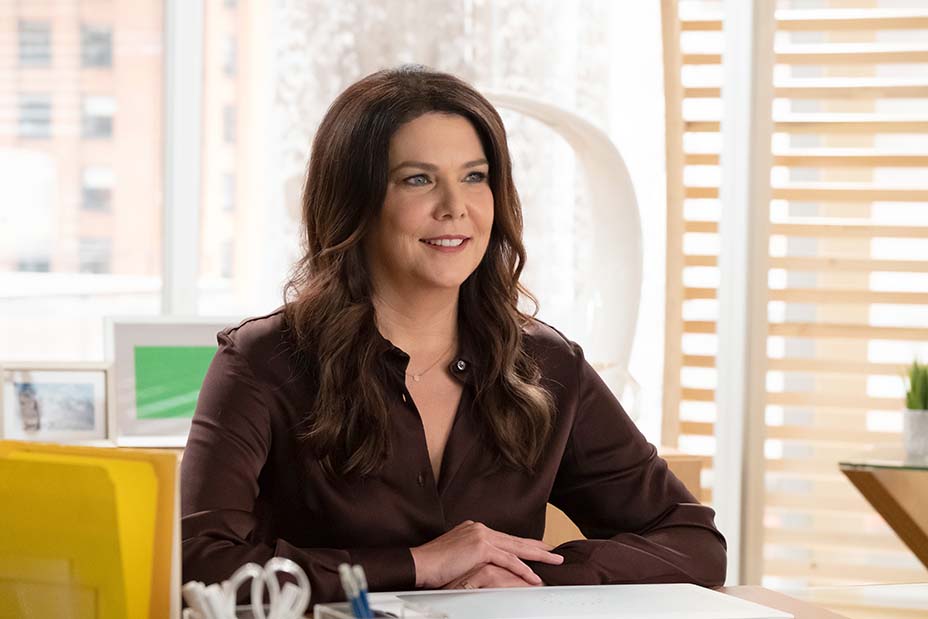 Plus there’s singing and dancing.

So much fun! I started in musical theater — I started in theater, period. I’d never recorded before. Some of just the newness and challenge of it was appealing, like, “oh, I’ve never done that. Let me see what that feels like.” And it was just such a good team. Jane, she can sing, she can dance. She’s beautiful. She’s an incredible actor. It was really fun to watch somebody be in a role that I think is perfect for them. You maybe get one, hopefully two of those in your acting career and it was just fun to see her be in something that gets her so beautifully.

Jane said you gave her lots of practical advice as far as being in such a demanding role. What did you tell her?

A lot of aspects of this show reminded me of early Gilmore Girls, where I had never had so much responsibility and I had never done something that required so much stamina and time. Jane is an incredibly hard worker. Some of my thoughts were to help her conserve and get through the day because your body has to adjust to working 12, 14, 15, 18 hours a day. It’s not normal. It’s hard. And she handled it really gracefully and beautifully. It was nice to be there for my friend.

In Sunday’s episode, the audience learns more about your character’s marriage and the struggles she’s experiencing, but also gives her more depth than the typical mean boss trope.

We were lucky to get Justin Kirk, who I think with a small amount of real estate tells you what this couplehood was and what she’s coming from. If we continue in any capacity, I hope he comes back. He’s so great. For what happens in the rest of the season it needed to be something that sets her into a tailspin and causes her to behave badly, which I would say she’s started to do. So this was a really important episode for that. It gives her dimension — it’s super fun and would have been enough for what this is to be funny and snarky and weird. More than mean, I just wanted her to be odd and have not great people skills. I just kept thinking as a computer person, she cares about her company and her work and she maybe doesn’t really know how to be a girlfriend, hasn’t really had much emotional bandwidth.

You’re filming the Disney+ Mighty Ducks series right now, which is a big deal for a particular millennial audience. What was it about that project you liked?

I like to do things that have really, really dedicated fans. [Laughs] When my agent sent it to me, he’s like, you seem to be choosing jobs according to what extracurricular activities you get to do. He was kidding, but he was like, how do you feel about skating? I [laughed], but then I read it and it’s so kind and funny. Emilio is in the show and he’s fantastic, but the twist is that my character becomes a coach and she’s trying to create a world for her kid that is kinder and more fun and where the world of sports has gone since the early Mighty Ducks movies. It just was really funny and warm and a great character. And I love 10 episodes. It feels already like you’re doing a longer movie.

Understatement of the year: It was fun to do Gilmore Girls at Netflix. I just love storytelling [when] you don’t have an extra episode where you’re like, “well, that’s the episode where we didn’t really have anything to say.” They envision this series as each year is sort of a different sports movie. Like, there’s maybe a winning season, there’s a losing season, maybe they go on the road, looking at those classic Disney movies, those classic sports movies. It’s a group of misfits, which I love, and it just really made me laugh and it has a lot of heart. Television, there’s so much interesting stuff out there but lot of it goes dark and it’s just not, I don’t think, what I do, and not necessarily where I want to [be]. I love Succession but I think I’d be terrible in it. It’s hard to find these things that are that blend that I’ve gotten to do of comedy and drama, and this really has that. And the kids are so cute and I’m learning to skate. Another skill to put on my resume! 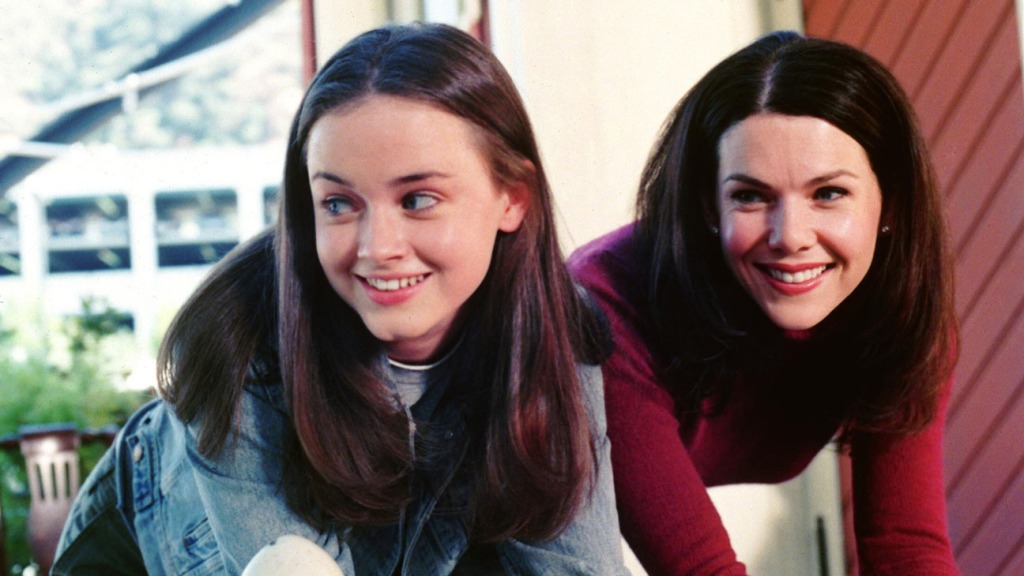 You’ve written three New York Times bestsellers, what other writing projects are you working on?

I am for sure. That was what has been going on for the last two years, almost — I was in development on I couldn’t even tell you how many things and still owe another book to my publisher and have ended up working with a couple things now. My editor at Random House is fantastic YA author who’s written like 11 books. We became friends working together and she asked me to adapt one of her books. In that process we began to work on it together and so over this, whatever it’s been, eight years, I have this collaboration that’s been really fun. You never can talk about stuff that’s not a done deal, but I’ve been working with her on adapting another of her books, in addition to a couple of other things. I’ve really, really enjoyed having those opportunities so yes, that continues.

Where do you find the time?

Certain things get more or less attention as a result but yes, this has been a very nice year creatively. I feel like work actually begets work. I wrote that book of essays while filming Gilmore Girls for Netflix, and I’m just one of those people who if I have nothing to do all day I look up and I’m watching Survivor and I’ve done nothing. But if I’m at work, I get more work done.

My editor’s been extremely organized and not a procrastinator. It’s been so interesting to extend the partnership that helped me get things in on time into the film world where I have some more experience and support to offer. That’s a good collaboration — you bring different things, like any union.