Hunter Schafer takes on her first acting role in HBO’s boundary-pushing drama Euphoria as Jules Vaughn, and on Sunday night’s fourth episode, the show dives into her character’s past and current traumas.

Over the course of the episode, the audience learns how Jules struggled with depression as a child and was forced into a psychiatric hospital by her mother, eventually leading to a suicide attempt. After leaving the facility, she begins to transition into a woman, and by high school is sleeping with a constant stream of married and unavailable men as an emotional escape. That seems to finally stop when she meets Tyler online and quickly falls for him, only to find out that it was really Nate (Jacob Elordi) pretending to be her dream man, blackmailing her to keep quiet about sleeping with his father, Cal (Eric Dane). The final moments of the episode are of Jules being comforted by best friend Rue (Zendaya), resulting in a passionate kiss between the two.

Schafer, who is also trans, spoke to The Hollywood Reporter about her character’s emotional backstory, that Nate face-off and working with a trans consultant on set.

In this episode we see a young Jules tricked into going to a psychiatric hospital and becoming suicidal. What was your reaction when you learned about her past?

Her backstory is really emotional and not something that I necessarily expected when reading the first three episodes. I was really curious as to how that formed her into the person we’re introduced to at the beginning of the series. Talking to Sam [Levinson, Euphoria creator] about it some, a lot of this he’s pulled from his life directly. As we’ve said as a cast before, each character is, in some ways, different facets of Sam and I think Sam brought a really potent moment of his childhood into Jules’ backstory. Obviously it’s sad and you really learn that she’s been through something transformative. I think it was something that intended to make her better but might have made her worse or made her feel more conflicted than she already was at the time.

Jules’ dad is really accepting of her transition as a teenager. Why was that important to show that she had one supportive parent at home?

For Jules, it says in her story that she begins transitioning at 13 years old, which is pretty young in the scheme of trans people. To transition that young, you need the support of a parent or guardian because it’s hard to acquire the resources at that age to move forward with that process and be able to recognize all of your needs, mentally and physically. I think her dad being supportive allows her to be where she’s at when we first meet her, so it’s pretty vital.

As a trans woman yourself, why was it important to you to shape this character and have this deep, emotional backstory?

I think there might be some confusion about why she’s acting the way that she is from the first episode, why she’s putting herself through that, from an outside perspective. So to know where some of that is coming from and to understand that some of her issues run really deep and formed when she was maybe even too young to clearly remember or too young to make that connection, that’s insightful and necessary.

Jules has a confrontation with Nate’s dad, Cal, at the fair after their hookup. Why does she protect him and promise not to share their secret?

I think she understands the parallels between her life and her search for that feeling that she can often only find in hotel rooms with these other men, and that they’re looking for the same thing. And while her experience with Cal might not have been great, I don’t think she’d use him that much differently than any other man she’s hooked up with, until she’s made the connection that he’s Nate’s dad. Even so, I don’t think she’d stir anything more up or make anything more complicated by trying to out him because she’s scared of Nate from the get-go. Nate is pretty scary. 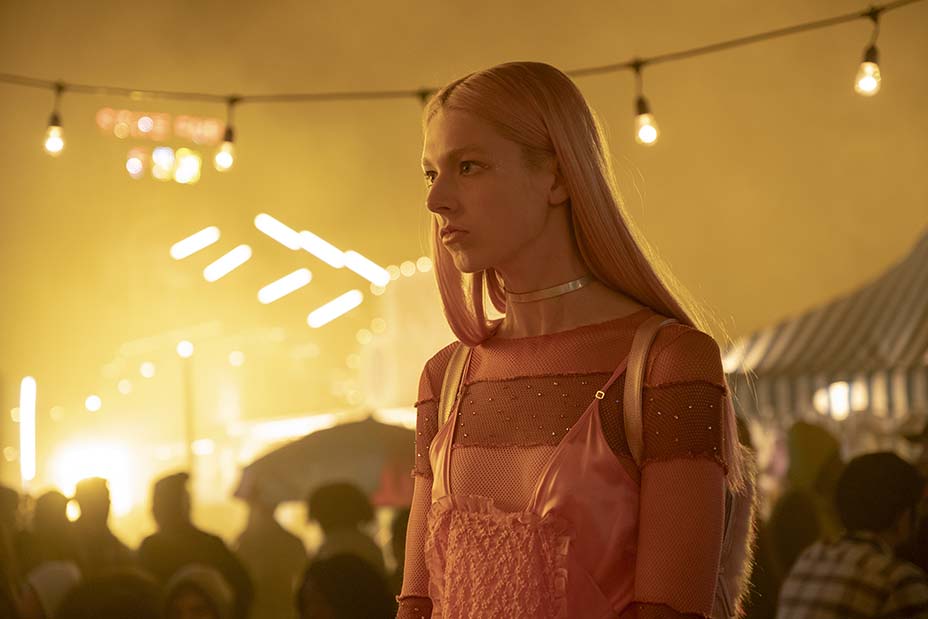 Speaking of, you have an intense scene when Nate reveals he is actually Tyler. How did you and Jacob prepare for that?

I remember coming to set that day, and Jacob and I were really tight throughout the series and filming but that day was hard for us because we knew what was coming. I remember both of us staying in our own headspaces and we said, “Hi,” to each other but didn’t really move beyond that until we were filming. Which I think helped create some tension which was palpable. I just had to go back into a place in my head, a loss of love or a realization that this person wasn’t who you thought they were, and that’s a pretty hard moment for lost people.

I think one, all Jules really wants is romance despite the constant highly sexual hookups she has. I think the way she wants to engage people is with some form of love and care. She thinks she’s really found it with Tyler, she believes she has a chance to push into that feeling with another person — physically or face to face — with someone who can give that to her and that she can make someone feel the same way, which is exciting because I don’t think she’s ever really had an opportunity like Tyler presented her. When Nate reveals that it’s actually him, everything comes crashing down in that moment and it’s a major turning point for her to sort of distrust not only in herself, but also in this system.

Your character has had some fairly intense sex scenes so far this season, especially with Dane’s character. How were those to shoot and how did having an intimacy coordinator on set help with those moments?

The intimacy coordinator was amazing as far as being able to create clear boundaries and navigate a scene. Not everything would be scripted and you’d have to feel things out in a scene like that. Eric was amazing and very accommodating, I think we had a good thing toward each other in making sure we were both OK, but having that extra layer of protection and navigation for a scene like that was really helpful and comforting, as far as getting down to specifics.

Sam has also talked about having a trans consultant on set to help with your storyline. Was he available to you as well?

Yeah he was on set, Scott, he was on set usually when I had a scene where something about my trans identity would be more prevalent or he felt that I might need him there. And he was always available to me, I could always ask him to be there if I wanted him there. That was really nice to know that I had another trans person around to be able to support me through moments where there might be a lot of other cisgender people around who might not be able to completely understand where I’m coming from. I think having some sense of community, even on a super-safe space like our set, it’s really important and that should be involved on any set.

This episode continued to explore the relationship between Jules and Rue. Why are they so connected and mean so much to each other?

I think Rue and Jules represent a home that only they can really bring to each other, which of course has its complications and will continue to grow more throughout the series. I think more than anything, they can make each other feel safe and when they’re together or making each other laugh or in each other’s arms, nothing else really matters, which I think to some degree is what they’re looking for. I think they’ve used different vices to acquire that feeling, but when they’re together the vices don’t matter as much and they really can just push into each other.

The episode ends with a passionate scene between Jules and Rue, which is the culmination of a lot of buildup between them. What’s next for those two?

In episode three, Rue kind of makes it clear that she feels something more than a friend toward Jules, and I think between three and four Jules has processed that, and then also while she’s still invested in her relationship with Tyler, she’s now more aware of that and knows that that’s there. So when she has this final straw with Tyler/Nate, Rue is there yet again to turn to, and I think Jules’ understanding in that moment that she can find the feeling she’s been searching for in all of these men with her best friend who knows, loves and supports her and would love and support her through anything, is so exciting. I think we can expect Jules to continue to understand how to find that feeling with Rue and then also dealing with Rue’s desire to use or desire to not use in the name of keeping Jules around will come into play.

Beyond all of the sex and drugs, what do you want people to take away from this show?

I don’t think our show is trying to teach anyone how to act or set an example, but I hope for people who are going through experiences that feel parallel to the ones on the show that they can feel a sense of comfort or a little less lonely, not feel normalcy but some sense of recognition in the fact that they aren’t alone in the experiences they’re going through.