As the White House scrambles to identify the source of a scathing New York Times op-ed, another withering indictment of Donald Trump has come to light, this one written over three decades earlier.

The document — unearthed in a new book about Trump’s involvement in the short-lived United States Football League — was sent to Trump, then-owner of the New Jersey Generals, by John Bassett, owner of the Tampa Bay Bandits.

“I have listened with astonishment at your personal abuse of the commissioner and various of your partners if they did not happen to espouse one of your causes,” Bassett admonished the future president in a letter dated Aug. 16, 1984. “While others may be able to let your insensitive and denigrating comments pass, I no longer will. You are bigger, younger, and stronger than I, which means I’ll have no regrets whatsoever punching you right in the mouth the next time any instance occurs where you personally scorn me, or anyone else, who does not happen to salute and dance to your tune.”

“You are not only damaging yourself with your associates, but alienating them as well,” Bassett continues. “Think before you shoot and when you do fire, stick to the message without killing the messenger.”

That missive is just one of many ominous harbingers chronicled by Jeff Pearlman in Football for a Buck: The Crazy Rise and Crazier Demise of the USFL, which charts a disastrous attempt at mounting a flashier competitor to the National Football League. 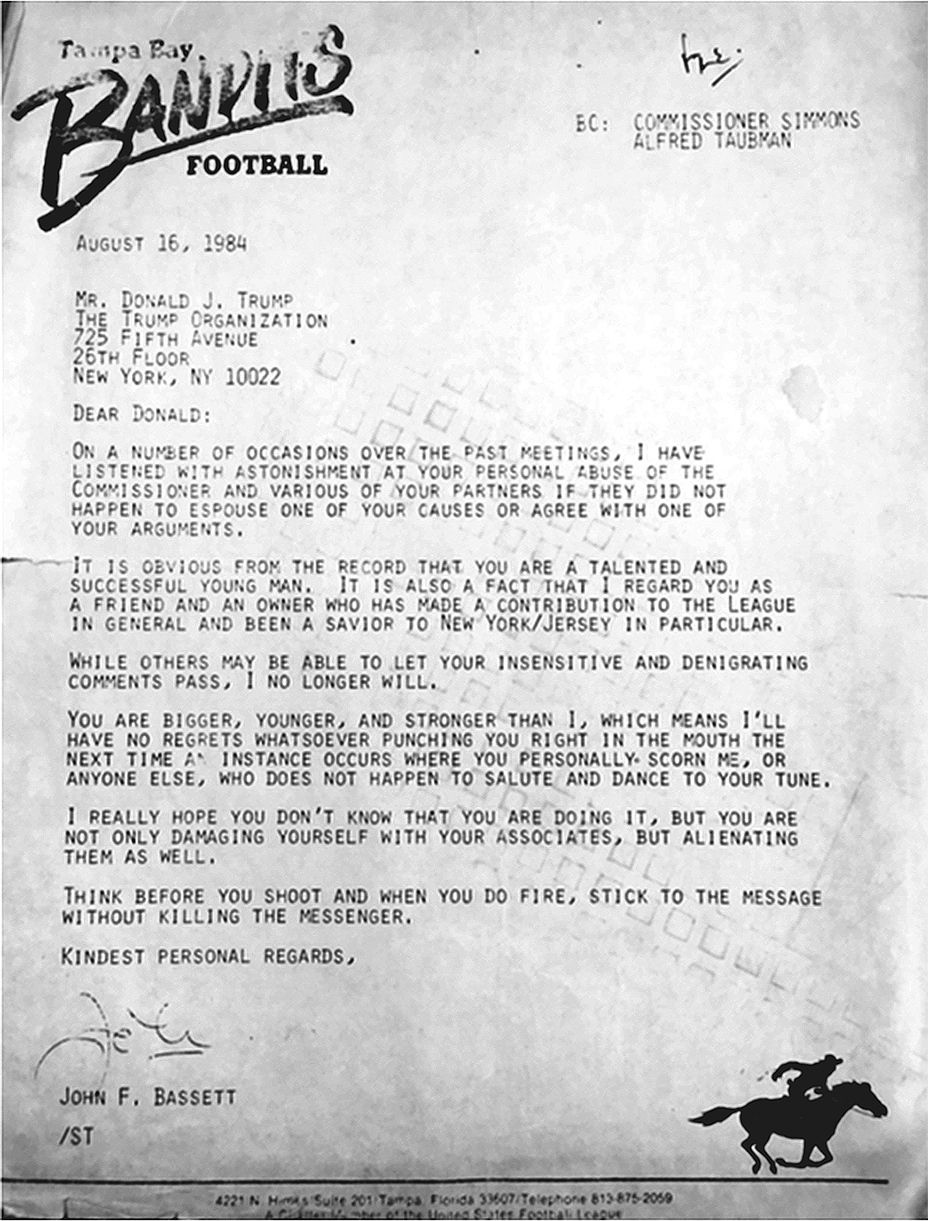 Though it lasted just three years, the USFL had a solid business plan when it launched in the spring of 1983. “It was a really strong approach,” says Pearlman. “Spring instead of fall, interesting markets, big-name coaches, gradual growth. The idea wasn’t to fight the NFL, but to build up to a competitive level over time. And that’s what the debut season largely was.”

According to the book, things went south as soon as Trump, then 37, entered the equation. After purchasing the Generals for $9 million ($23 million today), he started demanding big changes. Foremost, he wanted the season to begin in fall, to compete directly with the NFL. Says Pearlman, “He coveted his own NFL and would do anything to get one.”

One of Trump’s first moves as a USFL owner was to arrange a meeting with then-NFL commissioner Pete Rozelle at the Pierre Hotel in Manhattan. “Trump told Rozelle that he would gladly ditch and ruin the USFL if it meant getting an NFL franchise,” says Pearlman of the meeting. “Trump directly attempted to conspire with the rival league against his own people.”

Rozelle responded by pledging never to let Trump into the league — and despite repeated attempts by Trump, he held to his word.

It was during Trump’s tenure as a USFL owner that he first concocted his infamous alter ego “John Barron,” a purported press agent who would call media outlets on Trump’s behalf and feed them favorable tips about his “boss.” In reality, the caller was Trump.

For example, after the Generals signed quarterback Doug Flutie in 1985, “John Barron” called a UPI reporter to tell him, “When a guy goes out and spends more money than a player is worth, he expects to get partial reimbursement from the other owners. Everybody asked Trump to go out and sign Flutie.”

Trump had signed the Heisman Trophy winner to a six-year contract estimated at $8.25 million ($20 million today), then demanded his fellow owners chip in.

“This is a duplicate strategy to Mexico paying for the wall,” Pearlman notes, adding that “no USFL owner paid a dime of the Flutie deal — much like Mexico has yet to fund a wall.”

Trump later tried to force a merger with the NFL, and, when that failed, instructed his mentor and lawyer Roy Cohn — an infamous figure thanks to his ties to Senator Joseph McCarthy — to file a $1.32 billion anti-trust lawsuit against the league. It did not go quite as Trump envisioned it.

“The lawsuit was a disaster,” says Pearlman. “Trump was an awful witness and Cohn lasted a few months before leaving because he was battling the HIV virus.” In the end, the USFL won — but the jury awarded just $1 in damages. By 1986, the last of the league’s teams had folded, and the league had lost $163 million, or $375 million today.

“He pretty much ruined everything,” says Pearlman of the president.